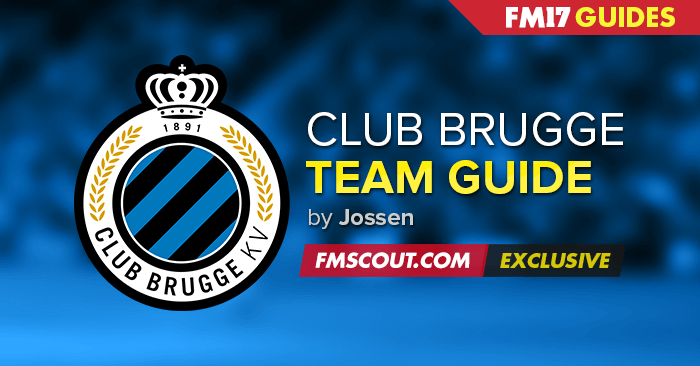 One of the most decorated clubs in Belgian football, Brugge have been Belgian league champions on 14 occasions, the team shares it’s stadium with Cercle Brugge (2nd division).

Main rivalries are with Anderlecht, matches between these two teams were often contested for the title of champion of Belgium and more recently with KAA Gent facing each other to call themselves team of the North(Flanders).

This season marks the celebration of their 125th year of existence. 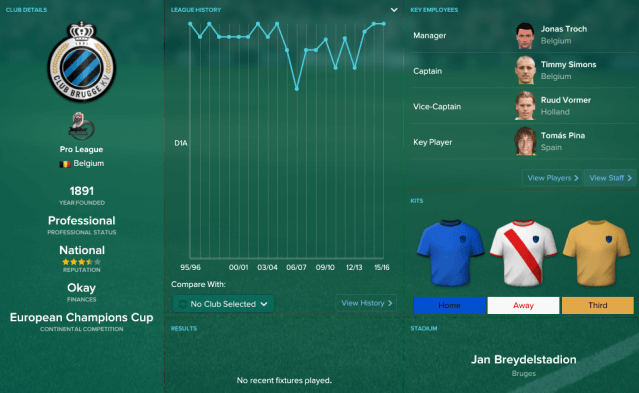 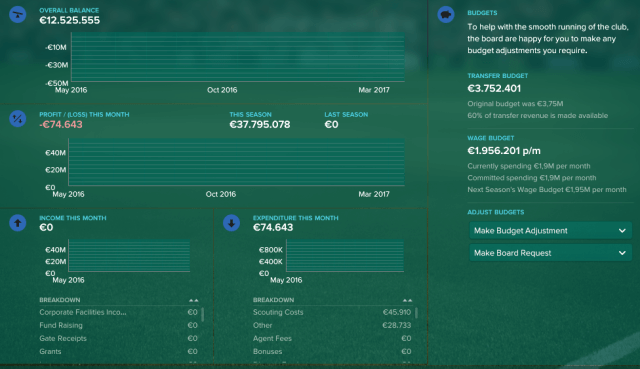 The board expects to be league winners, you can twicker a bit with some other expectations, the difference will be marginal.   All in all you’ll be on a tight budget of 4.5 million Euro’s. 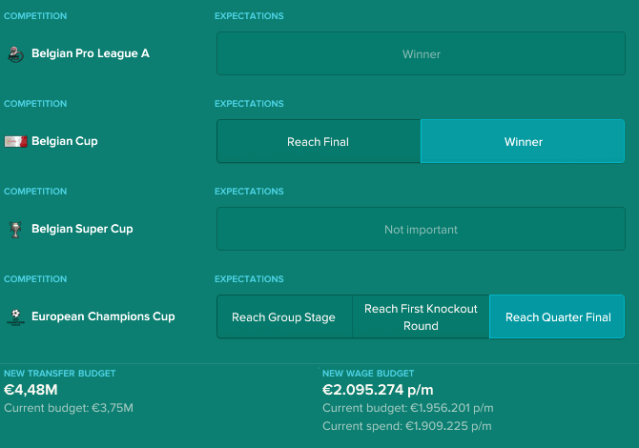 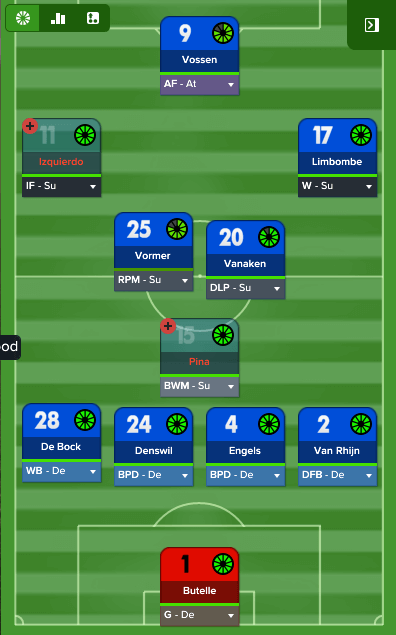 Forward focused wing defenders give them extra manpower on midfield, pressing the opposition on their own half.

Full Backs:
De Bock and Van Rhijn are ok full backs, but if you want to add strength to the team, here are the positions to do it!

Central Defenders:
You’ve got a solid core with Engels-Denswil in defense and adding the strength of Vormer and Pina you should be able to overpower most oppositions in the league(not CL!).

Central midfielders:
Pina as Defensive Midfielder with Vanaken as a deep lying playmaker and Vormer as your work horse on midfield.

Wingers:
On the attacking front Brugge have got Izquierdo and Limbombe who will create havoc on any League opposition defense.  Gedoz is a solid back-up and also Diaby can play preferably as left winger back-up.

Forward:
Diaby is normally the fastest forward of the team, Vossen is more of a hard working team player, best used in a Poacher-role and you’ve also gotten Wesley who you can use as a target man.  3 very different types of forwards, you can use as you see fit!

Well, Club Brugge didn’t sell out after their Championship win last season; only one player left the club RB Meunier -> Paris St-Germain.
Here lies also the weakness of the team, you will either have to get a better RB than Van Rhijn or a back-up for him.

On the LB position you will need a stronger player then De Bock or a first team valid back-up.

Further on, you’ve got 39 year old Timmy Simons living on huge salary, sell him if you can and open some more budget, Pina is valuable replacement for him on the pitch anyway.

Another tip, get Engels a contract extension asap otherwise you’ll be forced to sell him within 2 seasons because he won’t sign anymore.

Get Brugge through the Champions League Group Stage and renew their championship title in their 125th year!

This is not the richest club to manage but it has a league where anyone can win from anyone on any given day without having a sheikh to sack you on every next Monday. :)