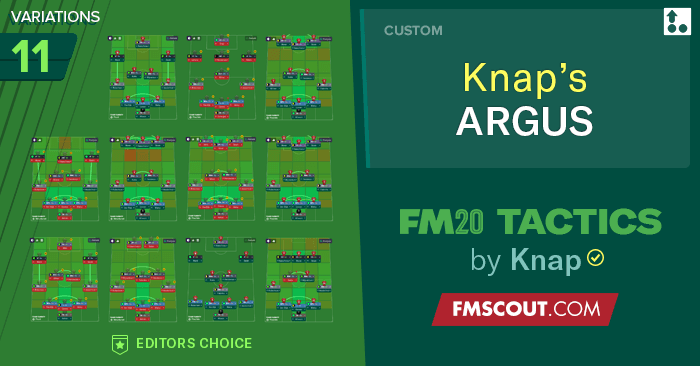 This looks like attacking tactics, but it's not exactly that; it's the middle of the road. It's a sort of middle-way in what Knap tactics are usually about.


Argus was a huge success on FM18, and also somewhat on FM19 as a strikerless. For the FM20 Match Engine he has turned it into a wide tactic that has some players who looks for space between the lines and some who creates space for others.

It's not an adventurous set of tactics as certain variations only have 4 players on attacking duty, but it's hard to say it's not attacking either when utilizing 3 strikers and attacking wing-backs.

Mostly it has 3 strikers, and wing-backs on attack duty. 3 BPDs are left defending, with the help of the two MCs. One is box to box and another is a ball-winner. It gegenpresses the opposition in search of mistakes.

It focuses on spreading the play. The two wing-backs stay out wide, the two wide strikers continuously move into channels and are instructed to run wide with the ball to stretch play.

It's not much of a press tactic (most Knap tactics aim to win the ball back), as we have central players easing off tackles, while in certain cases the BWM is the only one who is forceful with challenges.

What's included in the ARGUS Bundle of FM20 Tactics

Argus should be more suitable to a top team, but it can work with lesser teams as long as you have players who fit the roles.