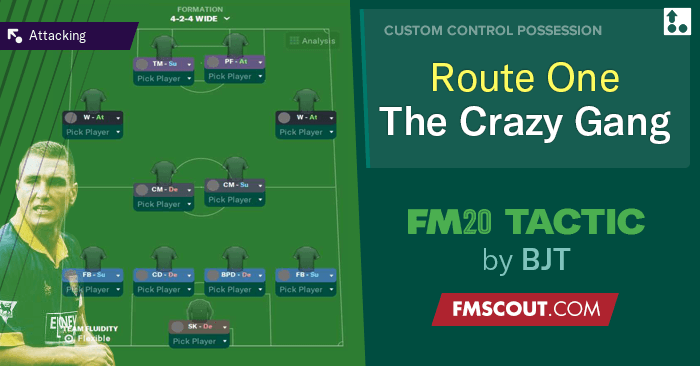 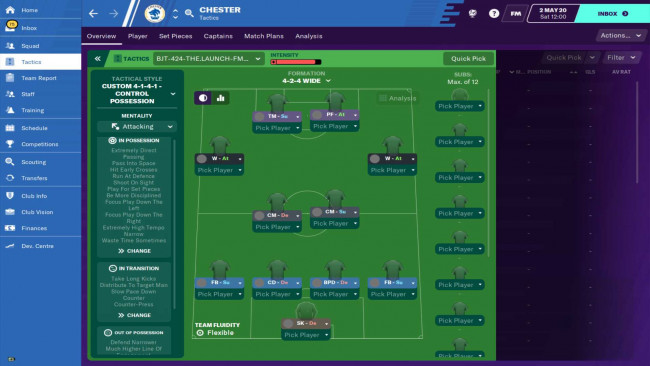 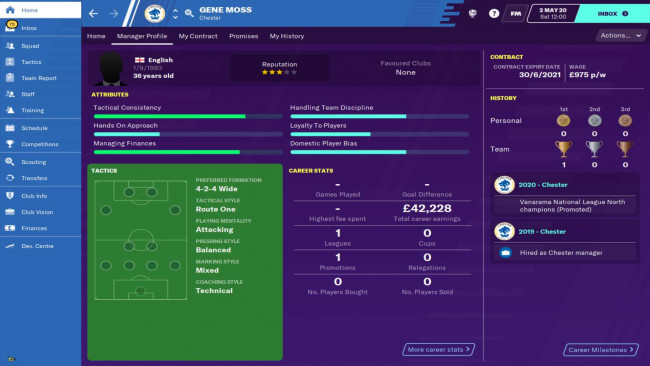 The next system of mine I have decided to bring is a complete contrast to the Regista Diamond.

Before I go further, the system is purely designed with the objective of adhering to the constraints of a pure long-ball / extremely direct passing system brings. So if long-ball is what you want to watch on your screens, hopefully this system can bring this to you.

I have stated that I always like & aim to create systems easy on the eye – and yes for me, that most certainly does include the extreme long ball.

With the objective to create a successful purely long-ball system, there is no club more successful at implementing this than that of the Wimbledon Crazy Gang.

A club that rose all the way from the bottom to the top and winning an FA Cup in the process. This led me to believe following this blueprint will bring some success on Football Manager with the right players.

And so my system is heavily based on their 424 formation. Tenacious across the park, launching the ball to the big man up top at every given opportunity, unsettling the opponents defence high up.

It’s obviously a system most suited for the lower tiers, but it is a system that in a good year, has the potential to take you all the way up to the top tier and hopefully retain a top league status.

And so it all begins from the back with FA cup final hero Dave Beasant, hoofing the ball up towards the edge of the opposing 18 yard box where big John Fashanu awaits….

Make sure to have tall centre-backs that are capable of coping with balls into the box.

Promotion from the lowest league, one below the top tier and also the Top Tiers is how I decided to test this.

This should hopefully indicate the potential of the system to of get out from the bottom and rise to the top, maintaining a top tier status and whether hoofing it up there can win some major trophies.

This season we were promoted with great ease well ahead of second place securing automatic promotion, which is what you want to be capable of doing if starting down from the basement. A tight tussle, but eventually claimed the 2nd automatic promotion spot. It’s clearer to see although the long-ball can work, you’re probably not going to play good enough football to walkover this league.

Really hard start to the year, turned it around to finish in mid-table clear of the relegation zone in 14th. We also made an FA cup final appearance against Man United where we lost 4-2.

But in true Dons style with the exception of winning, we endured 3 red cards in this game – so do expect your side to play a little dirty at times!

A good season for the long-ball this one despite a leaky back-line, winning the EPL with 92 points and also the ECL beating Real Madrid 5-3 in the final.

So it did relatively well with higher quality players and no actual target man in this squad, which given the circumstances isn’t a bad achievement. 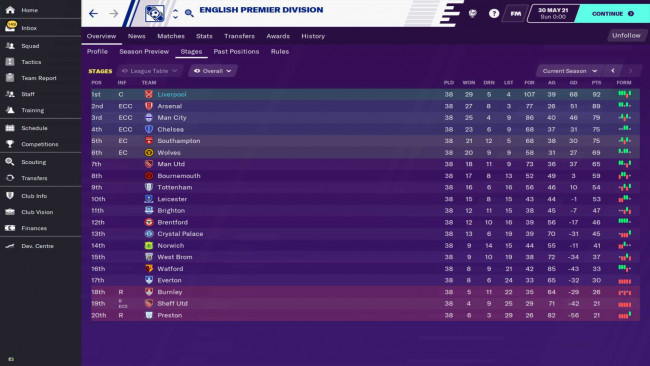 This tactic isn’t of the Pulis / Big Sam tight defence nick a 1-0 mould, but more classic Wimbledon, looking to score goals and play the long-ball in an attempt to unsettle the opponents.

You won’t need such a skilled side to play this tactic. It will work best at the lower levels. Being a pure long-ball designed game, it's never going to be the most consistent of systems out there.

But surprisingly, it has the potential to succeed at an elite level, and so it can be a long-term tactical blueprint if you’re looking to work your way up from the lowest divisions, maintain a top tier status, and if you really want, compete for elite trophies playing pure hoofball.

It may not be the most attractive form for many, but if you are a fan of the most aggressive route 1 style of football and want to see goals being scored at both ends, then you’ll hopefully find this tactic a highly pleasurable one to watch at work.

Discussion: BJT 424 THE LAUNCH - Route One with Vinnie & The Crazy Gang