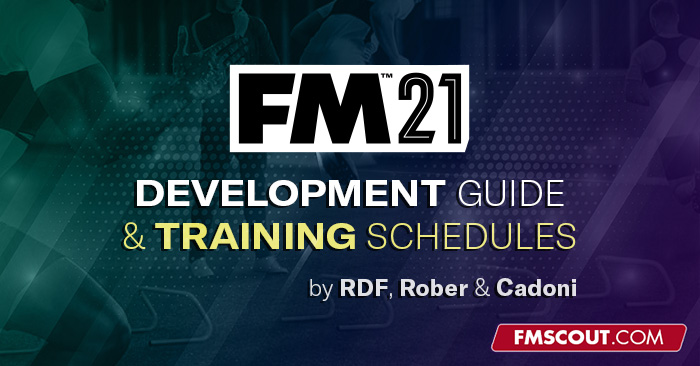 First thing is first. DO NOT LET YOUR ASSISTANT TAKE CONTROL OVER TRAINING!

Now, we know it's very simple and easy to allow the assistant manager to control training. I used to do it all the time also, believing controlling training is too much effort and time consuming. During FM20, I found myself to be wrong. Not only did I learn how to do it at a good pace, it was also very rewarding after seeing the results.

This year, I feel fatigue plays an huge role in both match performances and training performances so these schedules are there to help balance a few things. We want a nice balance between Injury Risk, Fatigue, Tactic Familiarity, Happiness, Sharpness and Team Cohesion. Allowing your assistant manager control this means you have less control over those important factors. One thing the assistant manager usually does also is use physical sessions during the middle of the season, which I believe is a bad idea for many reasons, one major one is the physical strain and increasing Injury Risk

Credit to Rober82 & Cadoni for their advice. The results we've managed to get together have been superb, and finally gathered about as much information as we could.

I, just like many of us here, followed the same advice in training. And that's to train players in the roles/position they're playing in. We got the impression that made them understand the tactic more and automatically become adaptable to it.

Well, we recently figured out that there might be more than one way to do things.
We then had to question, is there a better way to have more control over a players development in training?

For example, Mason Greenwood is a special player. He has great physical attributes and height but his heading was on 7 and bravery was on 10. If I then train him as an AF because that’s what my tactic uses, I could be missing out on exploiting his physical attributes. So I then gave him the training focus “Aerial” to improve his heading and bravery. After 4 seasons, the result was incredible… 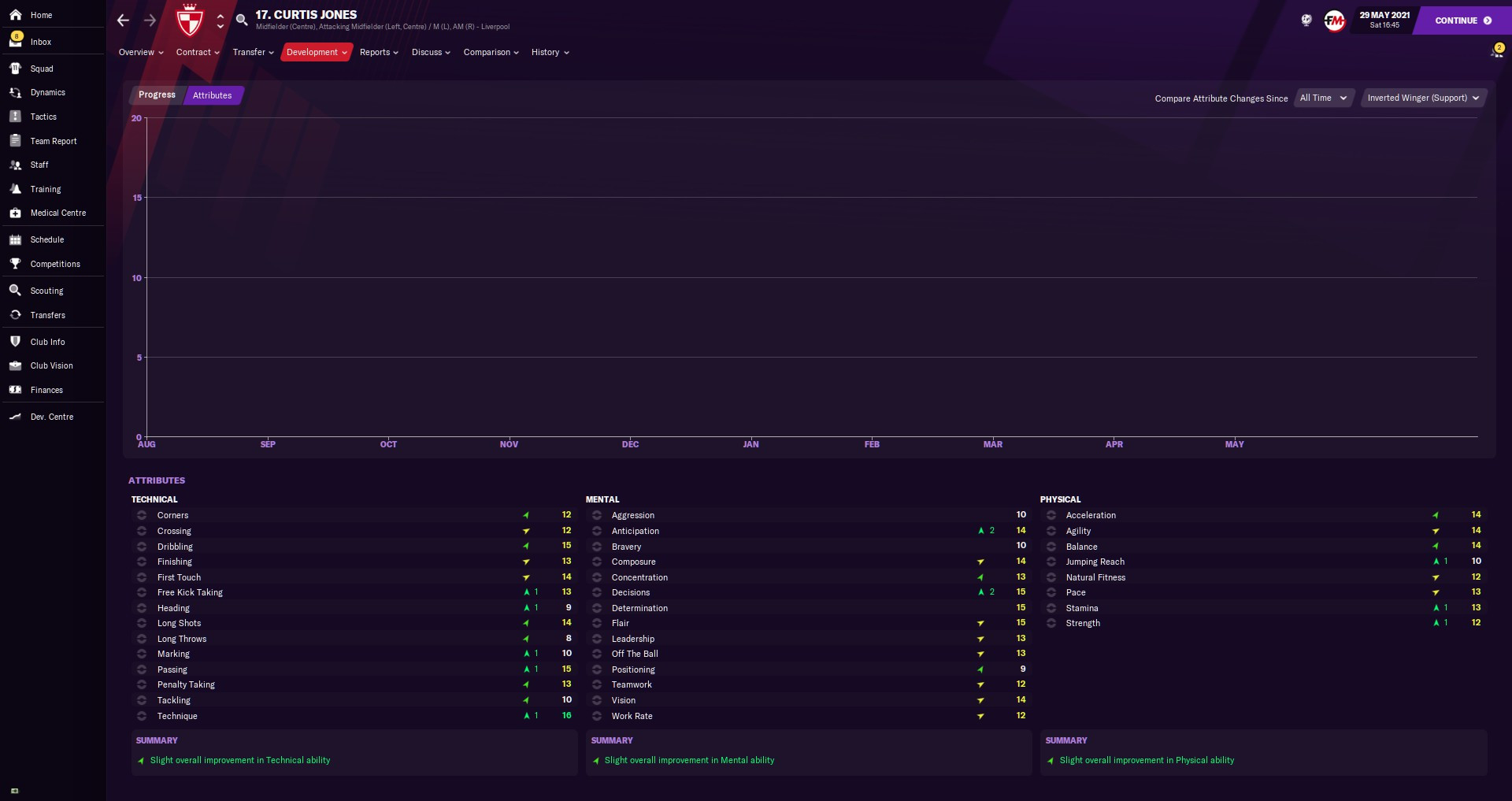 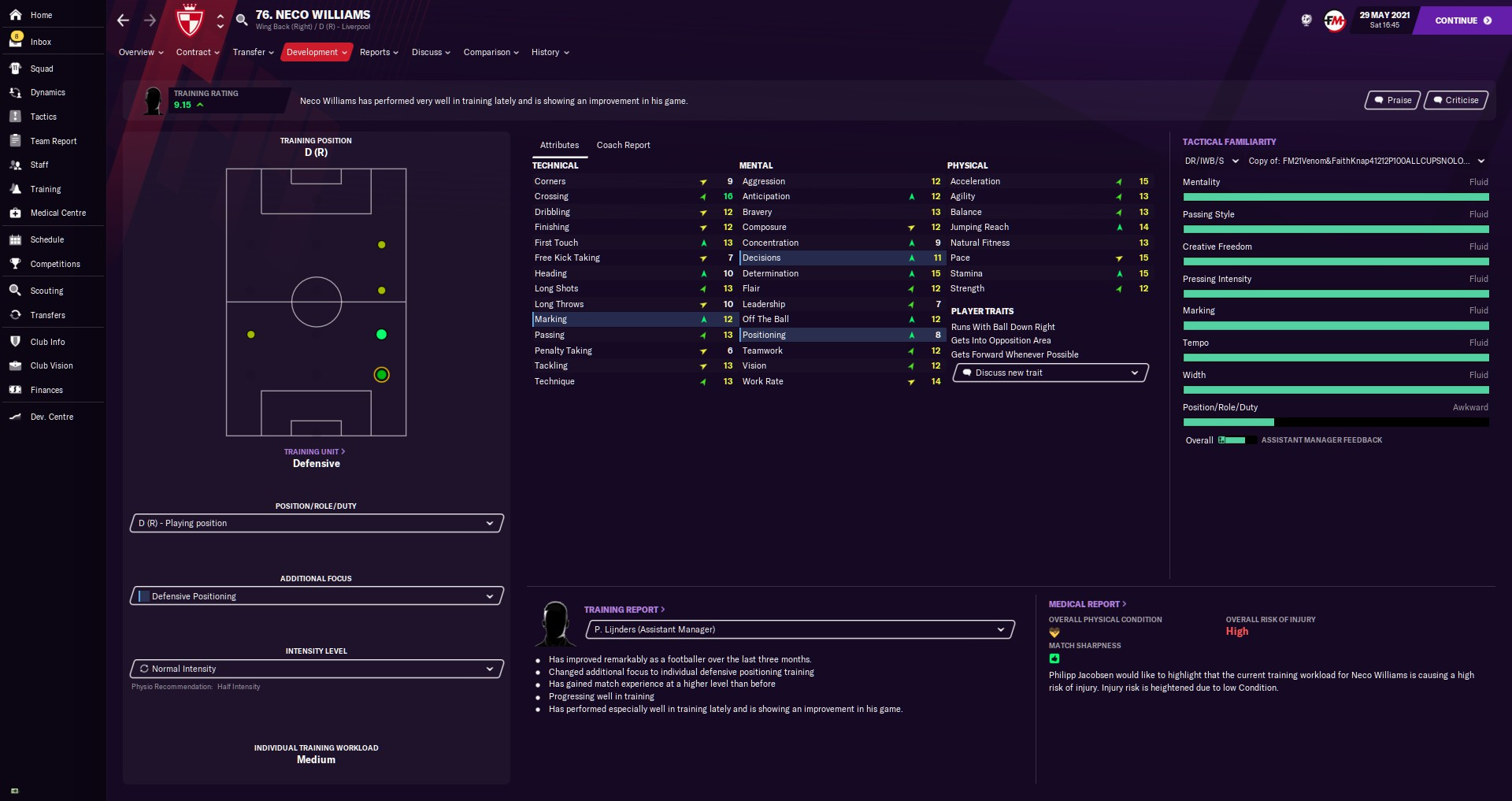 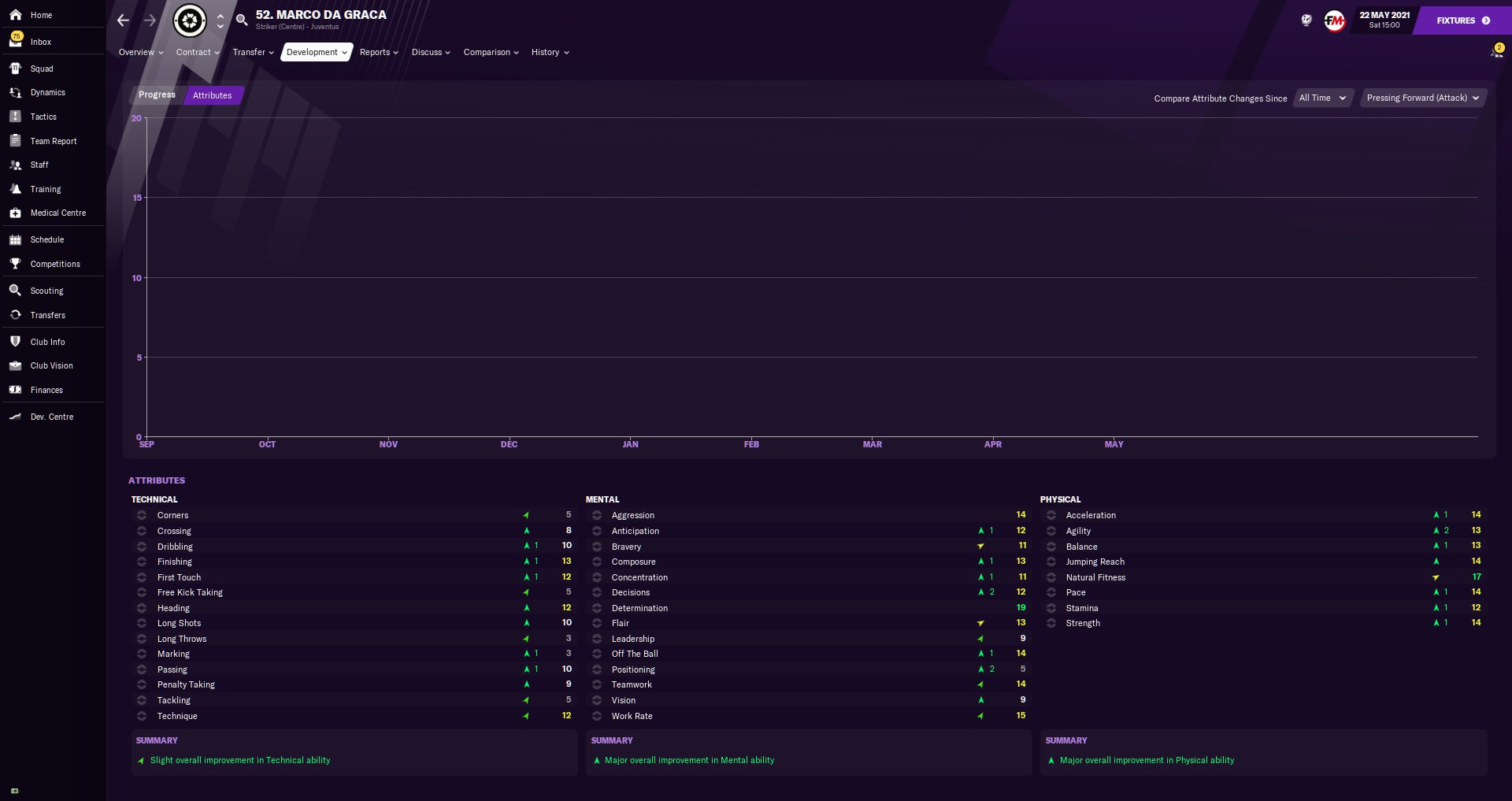 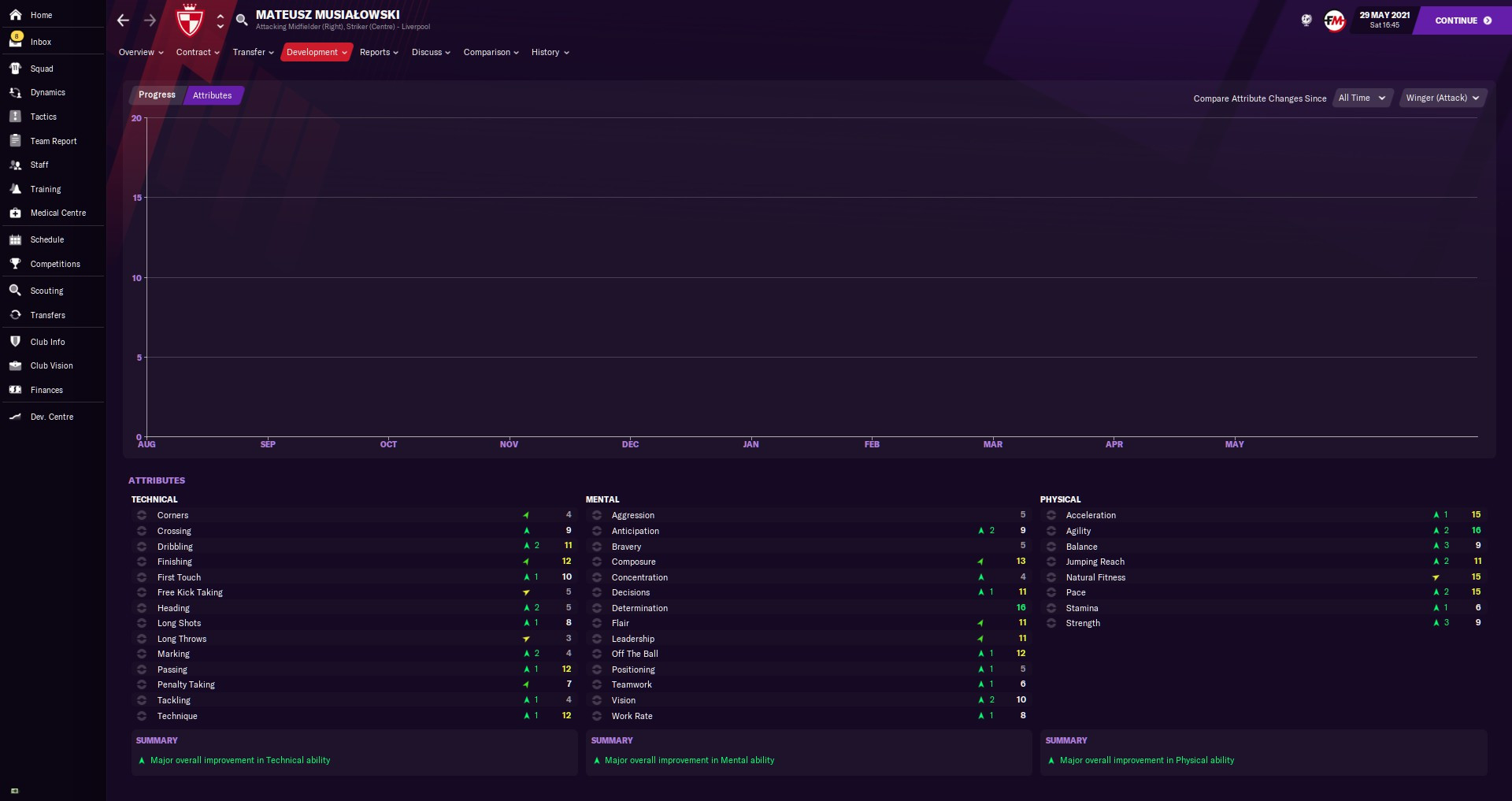 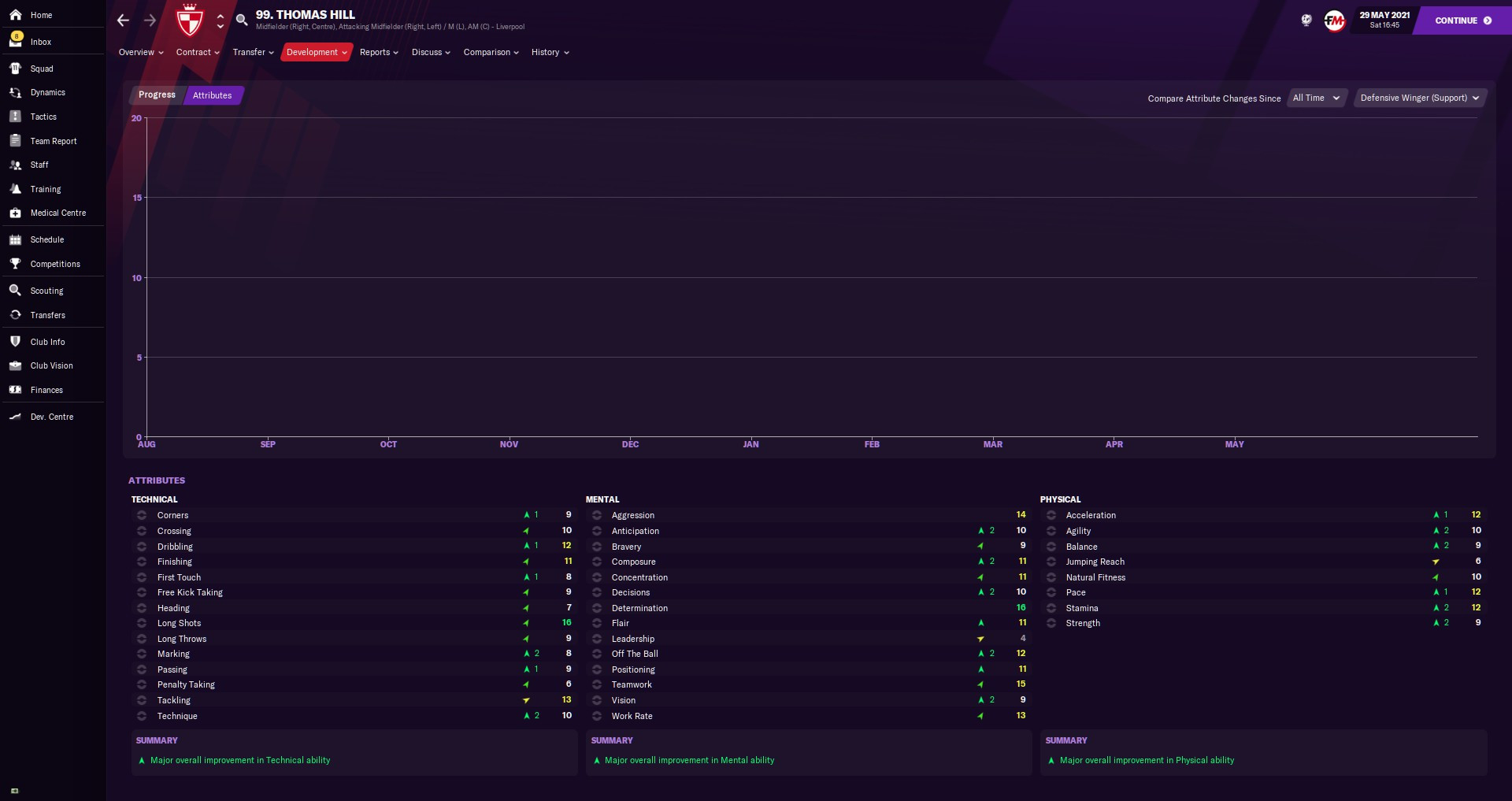 Our aim soon became to focus a player's yearly development on a certain attribute, or two, for a player to improve on to make him a better player. The game is filled with players who are insane finishers, but lack composure, or great at everything but make the wrong decisions.

Do we need 12 world class coaches? Does it make a difference? No one knows.

Picture your team training right now, the team is split into 3 sections. GK unit. DEF unit and ATT unit. Can you picture 5 ATT coaches coaching the ATT unit? Probably not, because it shouldn't happen. I did wonder what the fascination was in signing 12 coaches. I personally believe you don't need many coaches, but you can still do that as well if you want to.

However we recommend fitness first if you need to choose because of coaching limits.

All of them must have same style & preferred formation as you.

For the Assistant Manager (AM) I recommend the following:

Since AM will take care of training: