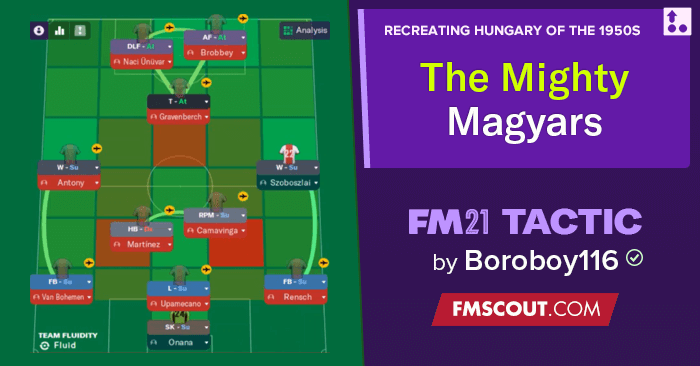 The Hungarian side of the early 1950s was breathtaking, they would go on to be known as the ‘Mighty Magyars’. They would beat all teams put in front of them, most famously being the first continental side to not only beat England at Wembley but to rip them apart 6-3. The team, including the legendary Ferenc Puskas, fascinated many, with their array of technique and tactics.

The ‘Mighty Magyars’ played in a fluid, attacking style, using a formation that could be interpreted as either a 3-2-1-4 or an early version of the 4-2-4 formation. Mainly built around players from Budapest Clubs Honved and MTK, the players had a very good understanding of each other tactically. Their first success was winning the Olympics in 1952 thus being dubbed the ‘golden team’. During this period Hungary would dominate every team they played, even going unbeaten for 4 years until losing to West Germany in the 1954 world cup final 3-2.

Ferenc Puskas the star of the team was at the centre of all things attacking. Against England he put on a masterclass showcasing all his skills, scoring the goal of the game, turning centre-back Billy Wright in the process. His partner Hidegkuti dropped deeper acting as a playmaker pulling the strings whilst helping the midfield, like Puskas, he was integral to the Hungarians success.

Check the video below for a greater breakdown of this famous side.