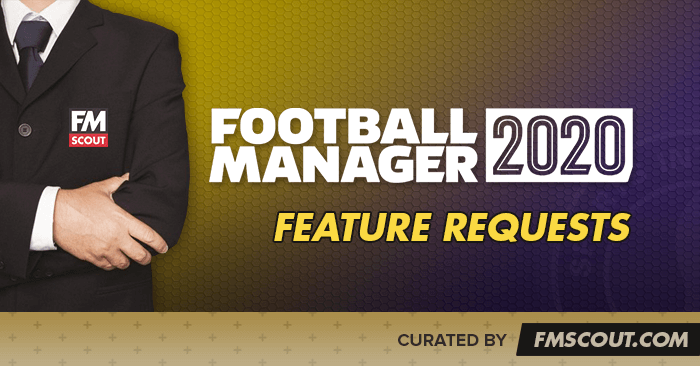 Football Manager 2020 has been announced, but there won't be any feature reveals before mid September. As we're eagerly anticipating those feature updates, we've asked our followers on social media to think of ways that could make FM20 better than FM19.

Welcome to the FM20 wishlist; a curated selection of feature requests by the FM Scout community. We received hundreds of comments, and in this article I present you with some of the most interesting ones.

It's always intriguing to know what the community wants to see in the next version of the Football Manager franchise, and to compare how these ideas will match the new features that made it in the new game.


Miles Jacobson - Sports Interactive studio director - started working on FM 2020 features at the end of 2018 and took him 5 weeks to go through most of them. The developers have a pool of thousands of approved features in recent years which is still full.

Some people believe that the last 3 FM for example have been data updates with a tweaked match engine. But it's widely admitted that FM19 was great and possibly the best in the series so far. Thousands of new features (regardless of how small) have been added to the game during that time.

With FM2020 coming to more platforms than its predecessors, it will be interesting to see what kind of adaptations and improvements SI have in store for us. FM20 will be a launch title on Google Stadia Founder's Edition, it shall be part of Xbox Game Pass for PC, and it will also be on Switch again.

Be sure to like the dedicated Football Manager 2020 page we created on Facebook to stay tuned with the latest news and discussion as it happens.


Now, let’s get underway with your feature requests!


Your ideas for Football Manager 2020 Subs getting told to warm up.

Visual effects and better graphics for the fans.

Button to finish remainder of the match fast.

See the bench and staff celebrating a 90th minute winner with players.

Add ball boys so the player won’t have to walk through walls to get the ball for a corner.

Be able to give officials lip when they give decisions against you that you don't agree with. Harass ref walking off pitch at half time, full time. Give opposition manager lip if they are playing dirty for example. Along with all the consequences that exist now. Managers can get booked is a new rule.

Build academies abroad in other countries to find and develop players.

More realistic regens. After 2-3 seasons loads of newgens are created with godlike ability! This type of players should be rare.

Youngster attributes and growth to be in correlation to the club stature, country and club talent production, the division they play and the match experience.

Based on the amount you give back to the local community helps increase the chance of good potential regens in your area.

Spend part of your scouting/youth budget on community coaches to allow you to recruit more players. More competent and consistent AI for transfers. Random club from a lower league will ask 30M for a newgen from their youth squad, but then they end up selling that player to another club for way less than half the price.

Better negotiation with clubs regarding transfers. If I set a 30M asking price and you bid 8.5M a thousand times I'm not going to change my mind.

Interact with agents to make buying players they represent easier and reduce sign on fees for them.

Enter negotiations first with a player before agreeing a fee.

A revamp of the agents module. Agents work with each other and against each other, they destabilize players. Mandate agents to find players for you.

Enrich and diversify press conferences. They feel boring and repetitive. A greater array of questions and answers available with greater consequences than either a ban from the FA

Select a match day squad. You hear of someone not being included in a squad ahead of a game and people start debating it.

More discussions with the board over affiliate clubs; e.g. for work permits, as there is hardly ever the option.

More conversations with the chairman.

Different ways to interact with players or staff based on their personalities.

Tell a club you will no longer work with them in relation to a transfer of a player if they are purposely trying to unsettle him.

if a player demands more playing time, then gets injured, there should be a greater period between them issuing an ultimatum when they return to fitness.

Fall out with fans. Fan protests.

Add team talks and more media as an option you can enable/disable in FM Touch. Visit the training grounds to watch the training matches between your players, so to keep a better eye on the tactics you experiment in and get more feedback.

More tactical options when not in possession, or when defending.

Youth players shouldn't have to be part of the senior squad to be mentored.

Choose every skill we want a player to improve as individual training.

Manage youth teams to start your management career. A lot of exciting youth players in the game, would make a change from managing superstars, chance to develop them instead.

More personal life control as a manager; family may not like the area, being on forced sick leave, personal issues that could affect having to miss a game.

More interactive training for coaching badges with the option to manage youth teams and reserve teams as you gain stature.

Buy a club using your career earnings once you retire.

Invest your manager wage earnings into upgrading your attributes. Take coaching badges without relying on the board.

Have a meeting as one of the league managers at the end of the season to vote on new rules or changes to the transfer window.

Work as a director of football or head of youth department.

Choose to be a real manager. Two options; create a coach (default), and take on the challenge of being a real one, like Guardiola or Zidane.

Pick your own kits and sponsorship deals when they are up for renewal.

Choose the upgrades to you can do to your stadium and training facilities.See your finished upgraded stadium and while under construction.

Be more involved in the commercial side of the club, such as asking the board to increase/decrease the ticket prices.

Ask the board to use transfer budget to pay off the whole or part of a loan debt.

Create you own stadium if you have the money for it. Choice of kit change every year. Be part of the kit design process.

Use of the webcam to make gestures during the game so you don’t have to press buttons from drop down menus.

Simplify the screen. FM19 had way too much going on, coloured borders around all the boxes of info, and different coloured lines for each line of info.

On deadline day do hourly clock for buying players.

Option for harder difficulty. Different coaches or scouts would give different attribute estimates of a player. On player profile, we get average attributes from the assessment of coaches/scouts.

Scratch the player traits section redesign it or weave into player instructions.

More dynamic reputation changes. When doing well (or winning even) the Champions League with a low rep club, it should increase the club's stature faster, making it easier to attract high profile players.

Improve the overall National Team experience such as team training and player interaction.

Better AI managers that know how to rotate and don't just buy players for the sake of it.

Sports scientists and data analysts capable of making a difference.

More realistic scouts. You can go to all corners of the earth to scout 10 players and 1 scout will have reports on them all within 24 hours. No travel time, nothing.

Make it possible to travel abroad on a promotion tour, e.g. to China or USA.

Implement bribery and match fixing to spice things up a bit. 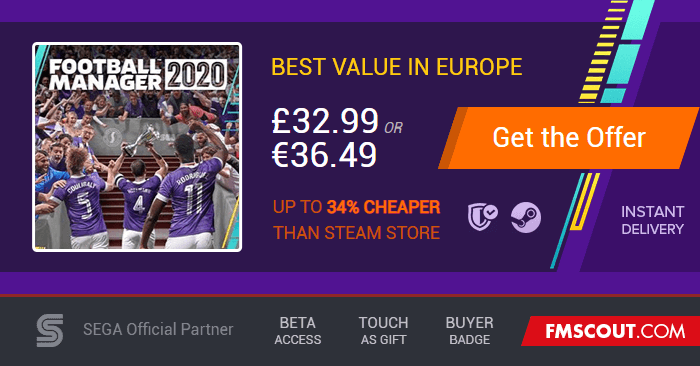 I've tried to include as many ideas as possible and organize everything into categories, but please keep in the mind the order is random and not optimal. If you have any suggestions you don't see here, feel free to comment.

Pre-purchase FM20 from fmscout.com to enjoy early access to the Beta version by mid-late October, a free copy of FM Touch 2020 for PC/Mac (also with early Beta access), a unique buyer badge on our site, and our gratitude for supporting our community financially.