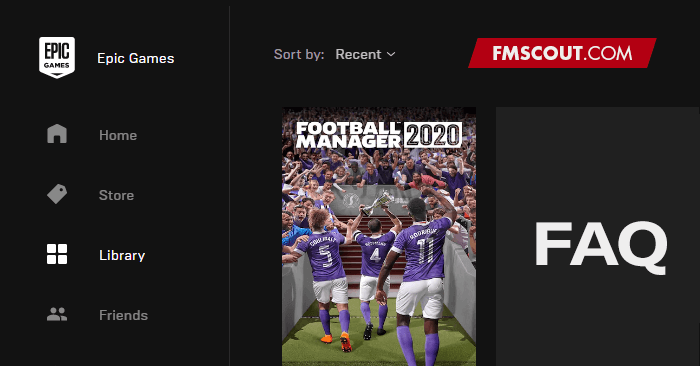 Football Manager made its debut on the Epic Games store with FM20 as of September 17th. Until September 24th, FM2020 is free to get and keep there forever. This free week has resulted in amazing numbers of users getting the game on Epic; more than 500,000 already.

This is a curated list of the most common questions I've seen around the FM community. With their answers of course. I'm hoping this will help you get a clearer picture of how the game is like on Epic, and what's different compared to the Steam version.

How does FM20 work on Epic?

You can install games the same way you do on Steam. Once you get FM20, it will be added in your library. From there you can install the game and open it once ready.
The actual game should look and be the same on either platform (same version even).
However, there's a number of known issues which will hopefully be addressed in the future.

How do you install FM20 addons on Epic? Does Epic have the same folder setup as Steam?

In terms of the User Data folder, it's exactly the same as Steam. So if you have a custom skin, a custom database or some tactics already stored in your User Data for FM20 on Steam, FM20 on Epic will find them too. There are some problems importing some of them though at this point (e.g. training schedules).
For certain mods that require fiddling with Steam's installation folder path, the equivalent path for Epic is by default at:
C:\Program Files\Epic Games\FootballManager2020\data

Is there a pre-game editor on Epic Games store? The free editor we can get from Steam tools library.

What about the paid in-game editor? Is that available on Epic?

It's available, but not universally. For example, Mac users can't use it. So if somehow you're a Mac user and purchased the in-game editor, you should request a refund by using the 'Contact Us' button found at the bottom of this page.

Can we really play a network game of FM20 on Epic versus Steam users?

In theory, that's the key feature SI advertised. The reality is the network game experience in general varies from flawed to impossible. That situation appears to be worse for Mac users.
For example, I keep getting this error message when clicking the 'Join Online Game' option: "A network connection required in order to play Football manager online.Please ensure that you are connected to the internet and that epic is online before". And I'm on Windows.
Hopefully this aspect of the game will be sorted with a hotfix soon.

Can you change the data folder location of FM20 on Epic? On Steam I could use this: --user_data_location="path"

No, this option is not available.

Is there any benefit in having Football Manager on Epic that would justify switching to it from Steam?

Not really. If you're happy with Steam, stick to it.

Why did SI release FM on Epic anyway? Steam was fine and there's also Game Pass.

My guess would be that Epic charges lower fees compared to Steam, so this is mainly a business decision. It also means they can attract new users who prefer Epic to Steam.

No. FM21 will be released on multiple platforms, including Steam and Epic. There's no exclusivity involved.


If you can't find answers to your questions, please post them in the comments below.