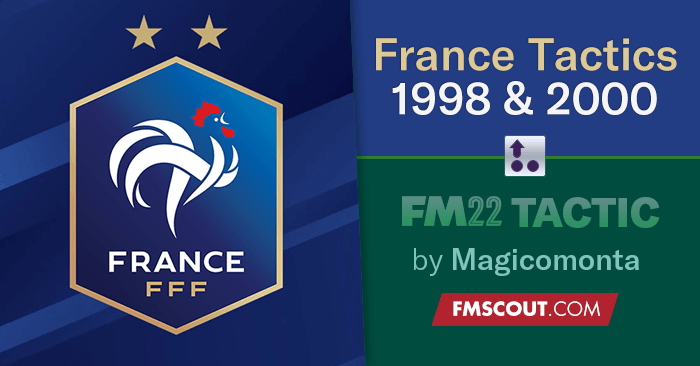 Magicomonta returns to present a new tactic, or rather two, of the two-year winning period of France at the end of the 90s, that is the French national team world champion in 1998 and champion of Europe in 2000 in the mocking final against Italy in the first historic trophy awarded thanks to the silver goal.

For the youngsters, it was the novelty that replaced the then golden goal that gave the victory in extra time to the first team that scored by changing it with the victory to the team that was ahead at the end of the first extra time) and after Delvecchio gave us the lead, I fool us in the final minutes of the Wiltord equalizer and the advantage in the first extra time of Trezeguet, a fresh signing of Juventus for the season that would begin after that European championship.

The two full-backs were both pushing like Thuram on the right and Lizarazu on the left, in midfield there was a real insurmountable dam formed by the trio Deschamps Karembeu and Petit while in front everything was in the hands of the phenomenon of the moment Zidane flanked in the trocar by one of Djorkaeff or Pires that, starting from the rear, flanked the tip Dugarry or Guivarch.

THE DEFENSIVE LINE was formed by Lebouef and Blanc or Desailly very aggressive on their opponents but also technically very good at setting the action.

The TWO TERZINI, as mentioned, pushed a lot, in continuous external overlaps with the midfielders and were very aggressive with the external opponents and will often be decisive both with assists and goals (famous Thuram's brace against Croatia).

As mentioned, the 3 midfielders lined up to protect their defense attacking the offensive opponents without giving them time to think, we often saw Karembeu also add to the two central defensive units and once they recovered the ball they immediately entrusted it to Zidane or to the two full backs who were pushing In turn, one of Petit more often and Deschamps less accompany the offensive maneuver by entering from behind.

The team completely changes its way of playing, its style passing from a wait and restart to a, in today's times, we could call it gengepress because it was going to take opponents across the board and the only similarity with the old France was the speed of execution in arriving in the opponent's area, that is, in the transition phase, as soon as the ball was recovered, the speed of Zidane was exploited, Henry who by now had reached its splendor even if not yet maximum and Pires with the usual front Dugarry who this time however works less for the team but attacks the depth more.

The full backs always push a lot but in this case they have less field to cover because they have two men in front on the wing to help them. Even the midfield changes, passing to two and with the explosion of Vieira who working as an all-out midfielder is valid for two accompanied precisely by a single teammate Deschamps who can only think about the defensive phase since Vieira is there to do both. the phases. The light of squasta squadr is still Zidane.

TACTICAL EXPLANATION in the video


RESULTS OF THE 1998 WORLD CHAMPIONSHIP IN FM
2 ° DEFEATED BY ITALY IN THE FINAL
EURO 2000 RESULTS
CHAMPION OF THE NATIONS LEAGUE
EUROPEAN... find out in the video