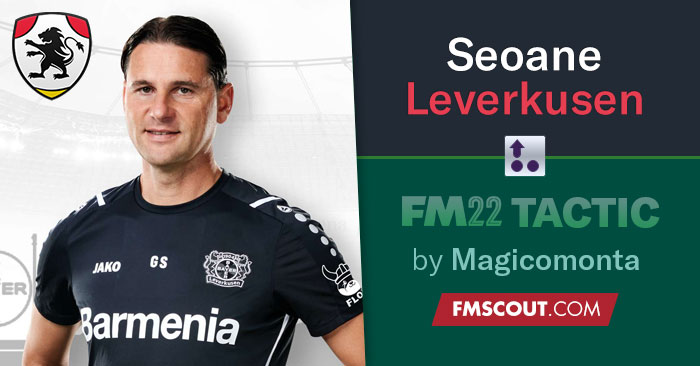 Today magicomonta presents an emulation of a coach who is doing very well in the Bundesliga, bringing Bayer Leverkusen back to the places they deserve and is Gerardo Seoame, winner of 3 consecutive Swiss championships with Young Boys.

Bayer's action often starts from Hradecky, the two center-backs widen to give a passing option and #Demirbay lowers between them for the setting. The two full-backs rise, remaining wide, on the line of the other central midfielder while one of the two wings supports #Wirtz in the central space and the other approaches the attacker, in second striker position.

The game always develops with many men over the opposing half of the pitch, with dense passing plots but constantly looking for speed and verticality. The Aspirines always try to find free space by widening the two full backs beyond the first opponent's pressing and making density in the center with the attacking wielders, or even one of the two central midfielders, who join the attacking midfielder. Also in the development phase Demirbay is lowered, with the two central players who do not disdain to accompany up to midfield, while #Andrich (the other midfielder) gets up on the trocar.

When Andrich remains on the midfield line, Demirbay joins him in the development, leaving the three-quarters behind the striker, with the two defensive backs even higher and wider.

The finishing area is exploited on the trocar by making central density and widening the full backs.

Bayer looks for the hole in the middle for one of the attacking midfielders, behind the opposing midfielders, and then from here to have more solutions to go to finalize, using the speed and strength in one against one of the two wings, or the ballistic skills and inclusion of Wirtz.

Another way used by Leverkusen is that, when the central space is clogged, to go and look for the lateral outlet on his two defensive outsiders, always left wide and in offensive projection, ready to exploit the space and cross for someone in tow or for Schick's movements, coming towards him to take the ball, allowing the insertion (especially of Wirtz) into the space left empty by his movement.

STAGE OF NOT POSSESSION

During the low construction phase, Bayer lets the two central defenders play, moving back to the halfway line and covering themselves with a very tight and short 1-4-4-2. But as soon as you enter the development zone, Seoane's team becomes aggressive and suffocating in search of the ball.

If the opponents develop in the central area, Wirtz or the two medians start under pressure immediately, while if the development is on the outside, one of the two wings or even a full-back comes off and always breaks the four-man line of defense.

This often leads to regaining the ball, or starting over from the back, but every now and then, if you miss the exit time for a moment, you risk leaving dangerous holes behind the backs or central midfielders, with the two central defenders left in at the mercy of the yellow and black attacks.

The midline is always well positioned. The attacking midfielder is the one who slightly changes the game system in the non-possession phase.

Often he joins Schick as a second striker going to obscure one of the opposing central defenses, but every now and then he lowers instead in line with the two offensive wielders.

The two medians, on the other hand, always act as a screen in front of the defense, but as mentioned they are the first to come out strong in the event of a central development by the opponent.

Diaby and Paulinho get on Andrich and Demirbay's line in a four-man line, ready to spring out when the ball hits their reference full-back.

The two low winger squeeze the central defenders close, but as already noted, as soon as the opposing team advances into the lateral attacking zone, they break the line to go and seek immediate recovery of possession.