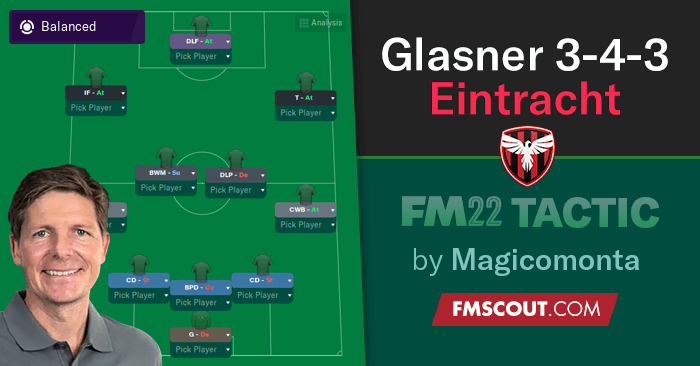 Today magicomonta presents the tactical emulation of the 2022 Europa League champions to everyone's amazement since in Bundesliga they reached mathematical salvation only a few days before the end of the championship.

As UEL champions they will participate in the next Champions League, a bit like what happened to Aston Villa in Premier League which participated in Europa League after winning the English cup despite getting relegated to Championship .

The Glasner team lines up on the pitch with a 343 with a wide exterior which then changes into possession and non-possession phase, let's now analyze them. 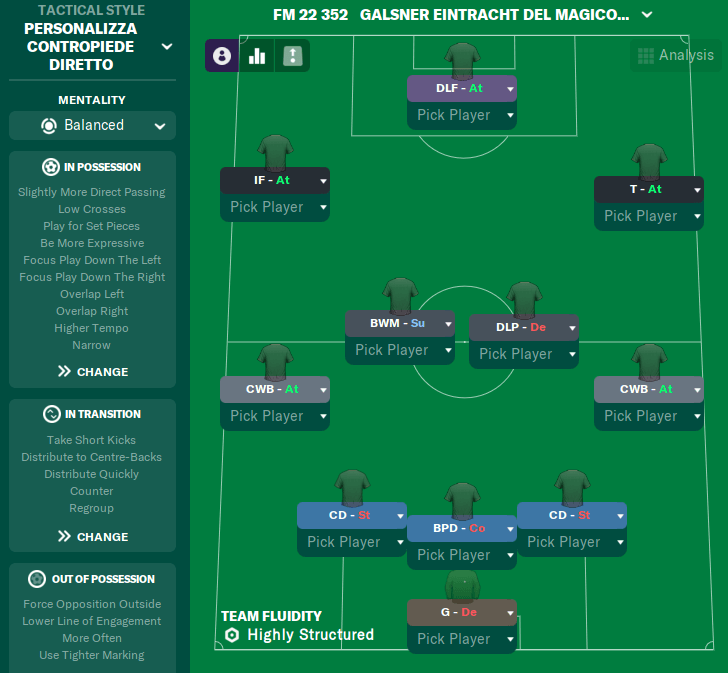 In the possession phase, the team relies on the central defender Hitteregger who immediately launches a direct throw towards the outside players, usually Kostic on the left and Knauff on the right, both anomalous "full-backs" as they are born as outside midfielders.

They are immediately aligned with the 3 offensive players, forming the 5 in front.

The three attacking players of the German team start two wide, usually on the left Lindstrom or Hauge, which is tightened very close to the tip Santos Borre in the penalty area, often exchanging positions without giving reference points to the opposing defense while on the right acts Kamada a very technical Japanese who was born as an attacking midfielder in fact he starts wide but goes to tighten positioning himself in the opponent's 3/4 to act in his natural role.

These tightening movements of the two outside players lead to an easy and dangerous overlap of the two "full backs" who push to the back of the field.

The central streets are rarely used, but outlets are always sought on the outside.

The two central midfielders remain stationed outside the penalty area in coverage in the event of a negative transition.

In the non-possession phase, the two offensive wielders are aligned with the 2 central midfielders while the two defensive wisers are brought in line with the 3 central defenders forming the defense at 5 and the midfield at 4.

The striker remains the only advance leading the first pressing which, however, is not very high given that the #eintracht awaits the opponents in their own half.

The defensive line is very narrow and two central defensive outside are very close to the central #hitteregger who is in cover while they often break the line going to press and look for the ancient opponent advanced player pushing them to lean on the outside after their defense has numerical superiority always working in tandem with the full backs and the winger who went down to double the marking.

POSITIVE TRANSITION
Once the ball has been recovered, the team immediately seeks verticalization towards the wings.

NEGATIVE TRANSITION
Once the ball has been lost, the team does not seek immediate recovery but moves to its own half, waiting for the opponent.


I tested the tactics as always in the dry season with no market, training, turnover if not forced by injuries or suspensions and these are the results:

3rd in the Bundesliga with 71 points, equal to 2nd Borussia Dortmund 58 goals scored and 28 conceded.
Eliminated in the ¼ finals of the DFB POKAL
EUROPA LEAGUE WINNER

And all the others can be found in the video