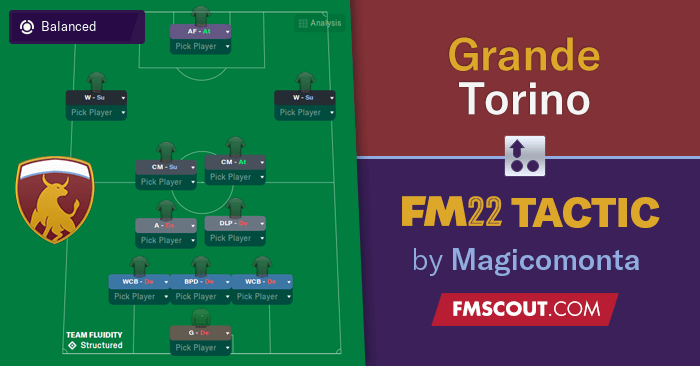 TRIBUTE TO THE GREAT BULL!
Heroes are always immortal in the eyes of those who believe in them. And so the boys will believe that Torino is not dead: they are only away ”. (Indro Montanelli, from Corriere della sera of 7 May 1949)

There is no better way to present this tactic, or rather, this tribute to the great dead of Grande Torino.

Good evening guys, I'm Magicomonta and I will present to you my tactical emulation of the Great Bull.

The formation of the system is a new game "module" that appeared in those years, also known as the WM. 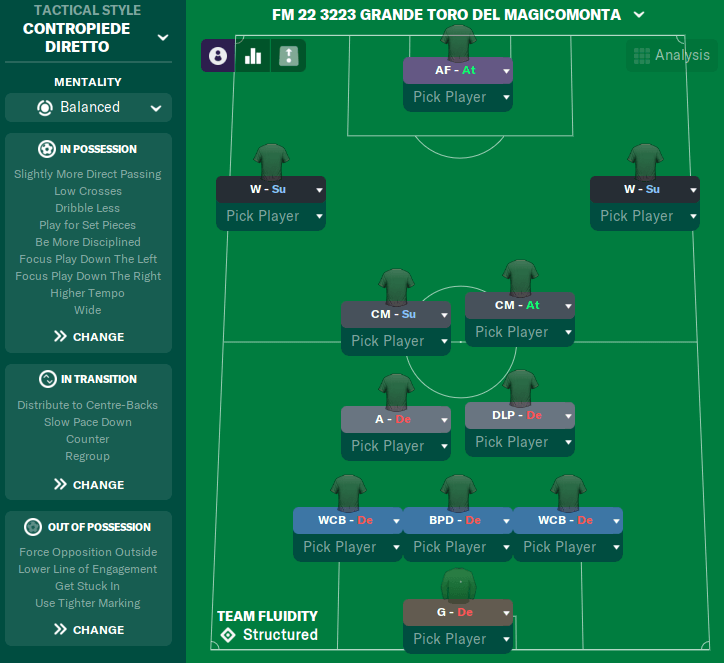 Until then, the most popular tactic was the "method", a more defensive type of disposition, which had allowed Pozzo's Italy to win the 1934 and 1938 World Cups and whose strength was given above all by the counterattack.

In defense there were only two full-backs and a cm who was shuttling forward supporting the offensive maneuver and then returning. The attacking phase was set by the midfielders who were outside the cm. The attacking midfielders and the wings had the task of serving the balls for the center forward.

In the system invented by the English Herbert Chapman, Arsenal coach, in practice a sort of 3-2-2-3, with three defenders, four midfielders (two midfielders and two inside), three forwards placed at the top of a W and a M.

Chapman chose to move a median back to the line of defenders, effectively creating the "stopper" while the full-backs who in the method became central defenders, marked their respective wings. The 3-man defense was born.

The marking tasks were simpler, and being a mirror array, man marking was also born. But the system was also more dynamic, more balanced and, if played with the right players, it was a tactic that for the first time guaranteed control of the nerve center of the actions: the midfield.

This was set up on four players arranged in a square (as they are placed at the top of the W and M mentioned above) and involved the use of two midfielders and two half shoes, the first two to organize the restarts and to give protection to the defense, the other two, as in the Method, intended to support the offensive action.

It was with the arrival of Loik and Mazzola from Venice that the foundation process of that great team ended.

In the video you will find my explanation of the tactic in fm22.


I tested the tactic in a legends database where there are teams with all their legends of all time, while I only use the rose of the big bull.

As always, test of one season without transfers, training sessions, placements, turnover (except for injuries and suspensions) and without ever changing anything to the tactics either during or before the match.

THESE ARE THE RESULTS THAT YOU WILL FIND MORE DETAILED IN THE VIDEO
CHAMPIONS OF ITALY !!!
Gabetto 57 goals
Mazzola 21 goals and 21 assists
Romeo Menti 7 goals and 20 assists

A hug from your magicomonta