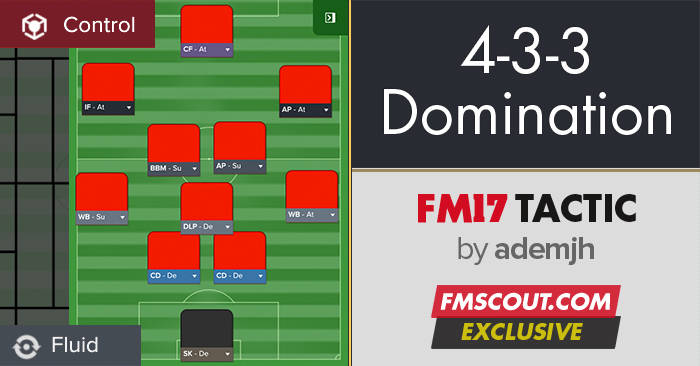 This Cruyff and Guardiola inspired tactic is forged on the basis of fluid possession control and utilisation of overloading and underloading creating numerical superiority, which can prove to be of devastating effect. This, paired with compact high line pressing out of possession in order regain the ball quickly and thereby limit the transitional phase, allows a constant stream of chances to be created and for control of the match to be achieved. This makes for a winning tactic.

Using this tactic myself during three seasons of managing Arsenal, I won a total of 14 trophies, including three Premier League titles, consecutive Champions Leagues, and an unprecedented clean sweep septuple in 2018/2019. 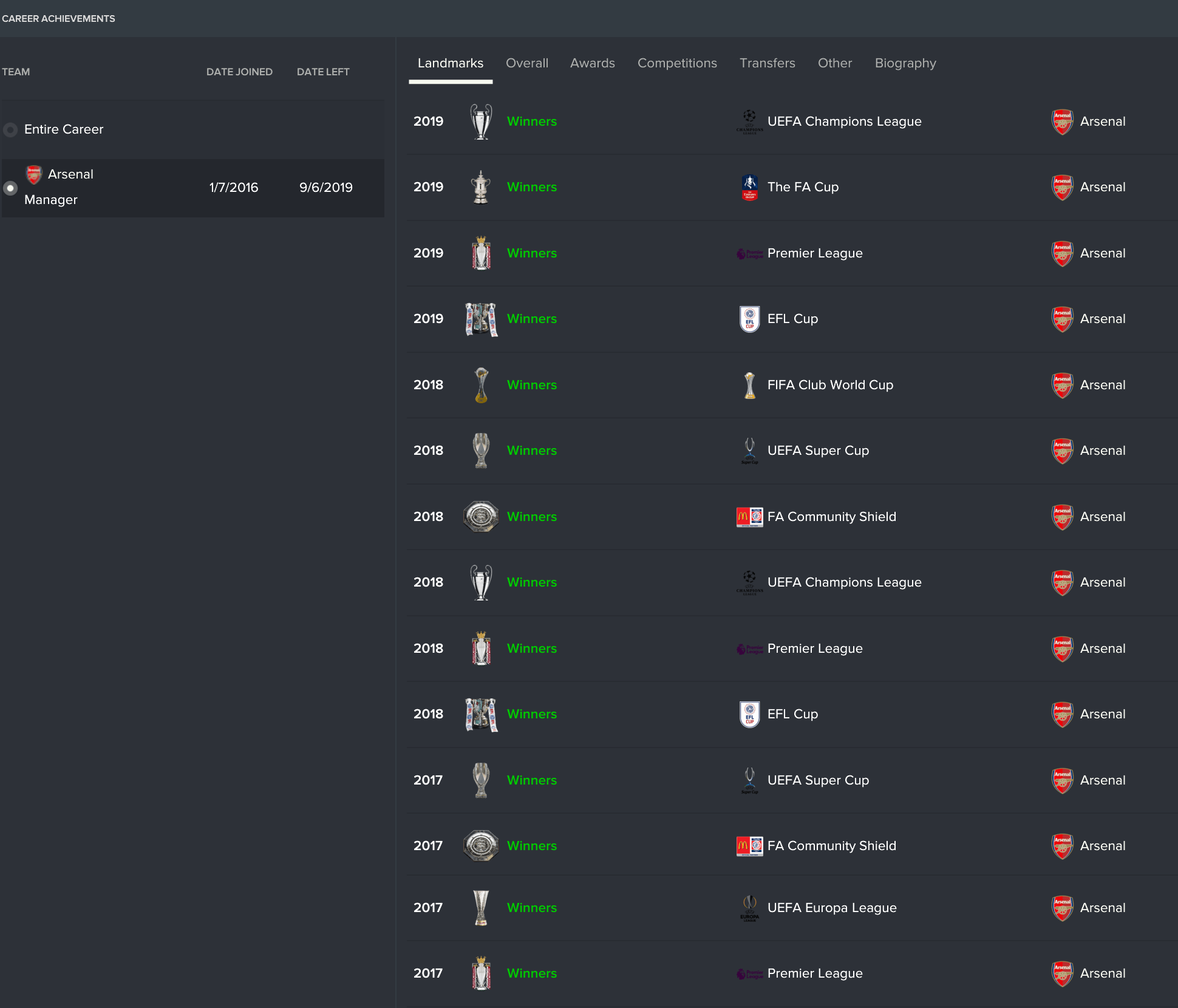 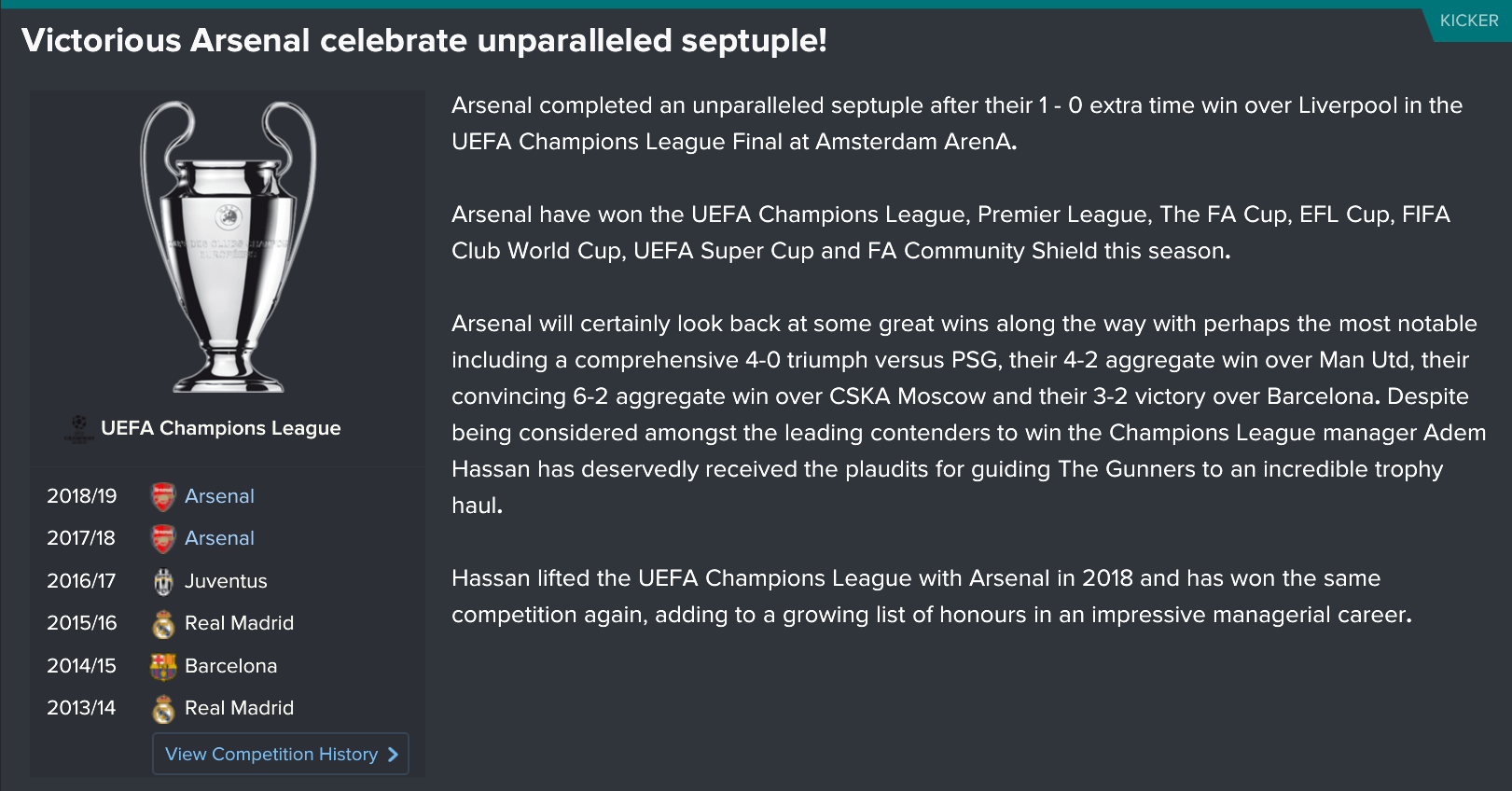 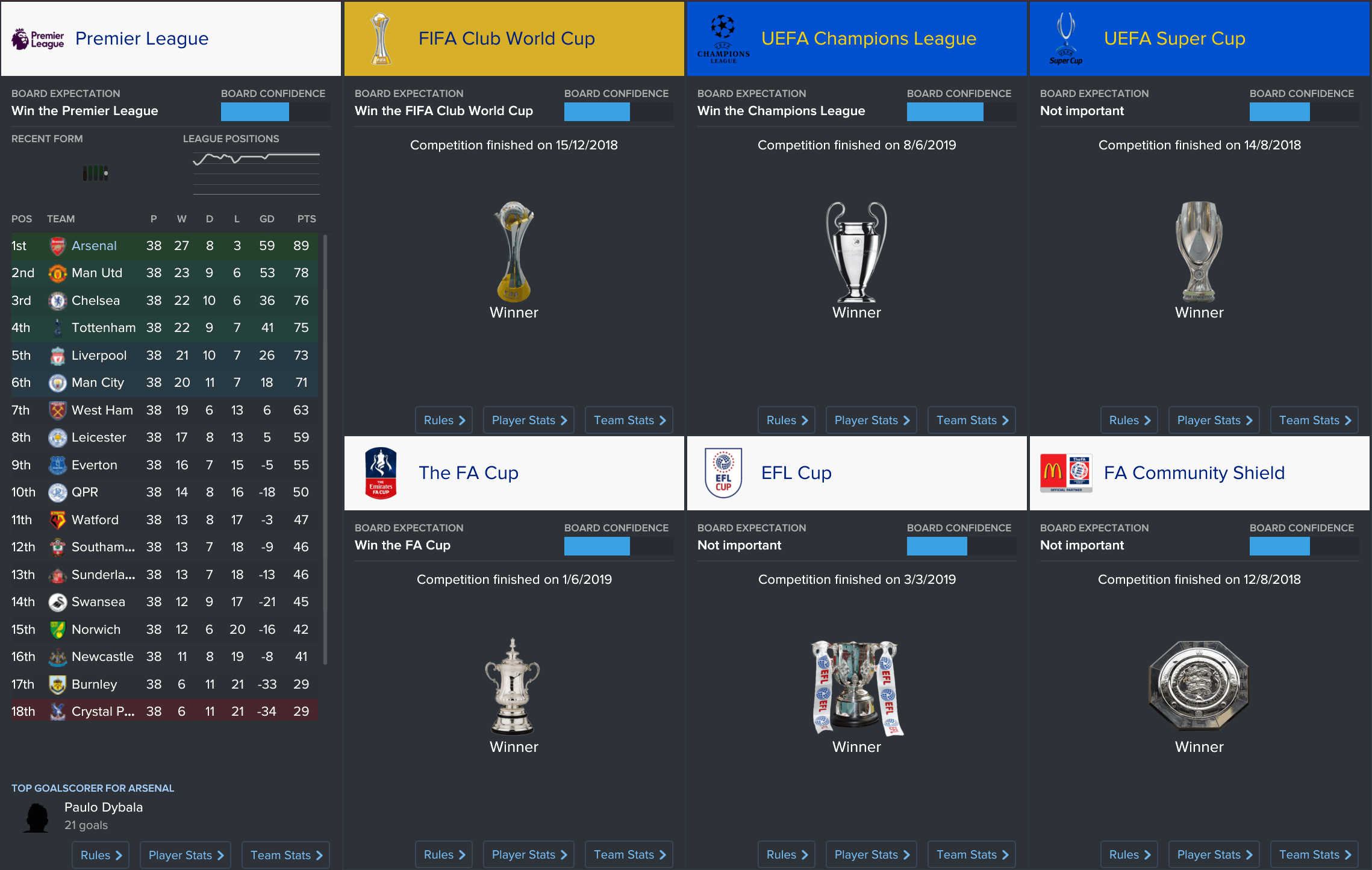 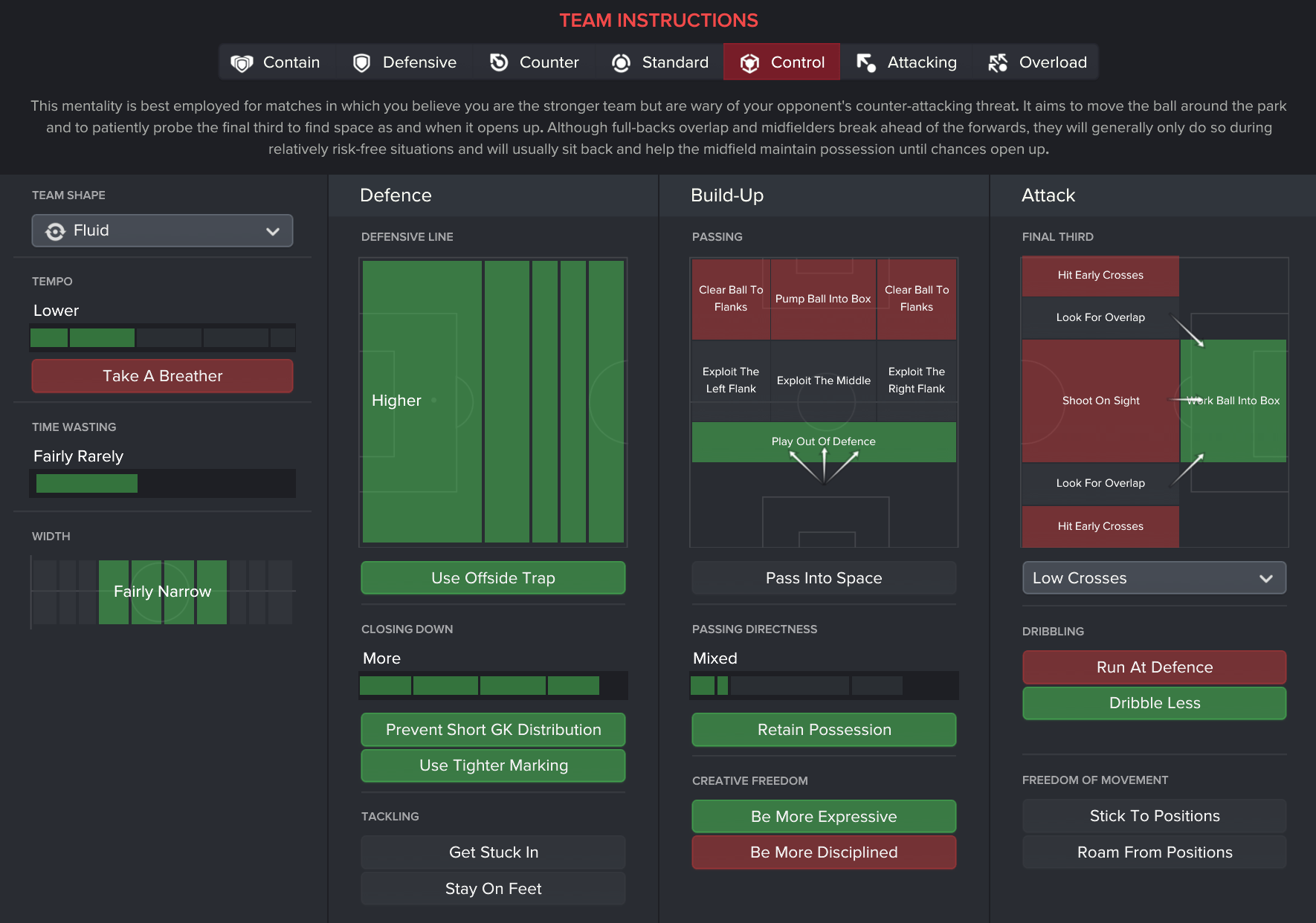 - Fluid Team Shape – Allows for greater creative freedom and movement into transition phases when suitable, on the basis of technical and cognitive proficiency. Also creates a more compact team shape, thereby limiting the transitional phase and allowing pressure of the opposition to be applied more quickly in possession turnovers. This creates a more effective counterpress due to limited horizontal channels for the opposition to operate in.

- Fairly Narrow Width – Allows for build-up to be concentrated more centrally and subsequently closer to the opponent’s goal, and for possession to be better retained as there is a lessened horizontal distance between each player. This also allows for a narrow defensive shape to be quickly adopted when possession is lost in order to create an effective counterpress; assuming a narrow shape restricts the opponent’s ability to play out vertically through the lines from the back, forcing them to play either out wide or over the top.

These instructions underline the ethos of the tactic: possession-retention football that allows control of the match and creative flair on the basis of technical ability.

*Type of crosses can be altered accordingly to the strengths of your main forward. However, low/whipped crosses generally suit the type of forward best deployed with this tactic. 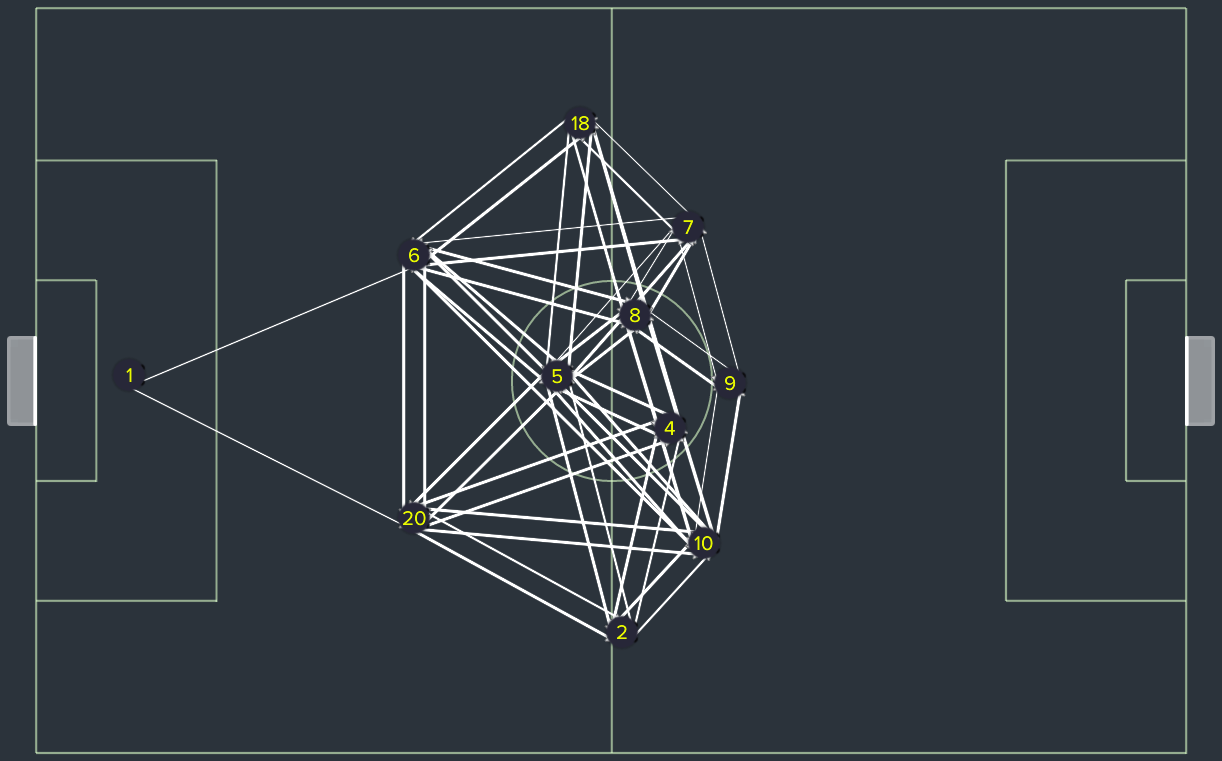 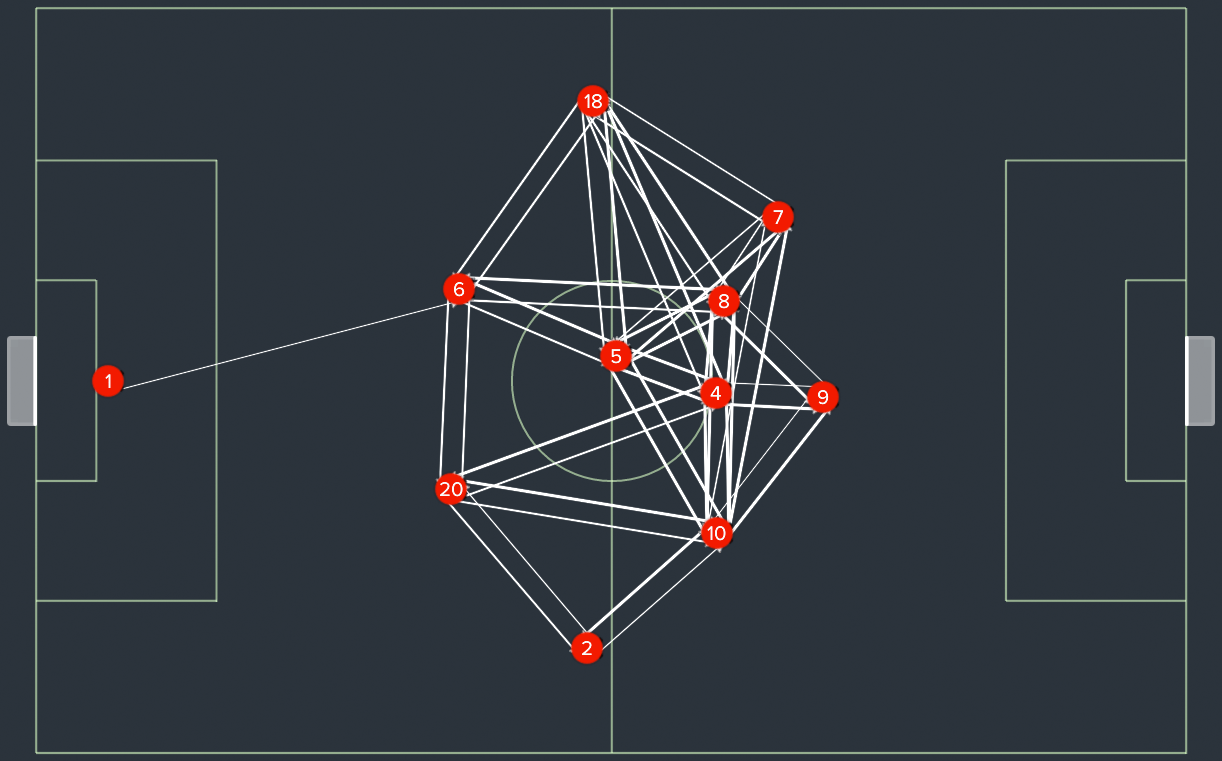 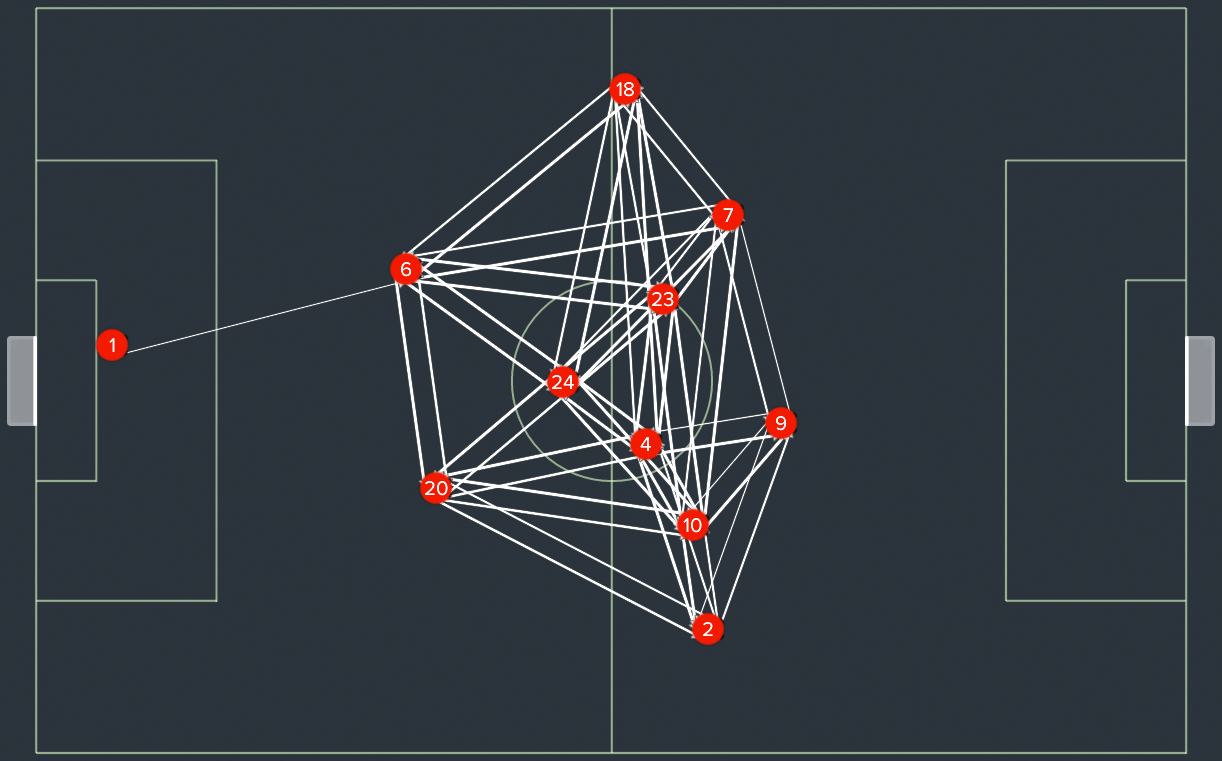 These instructions allow for a high-intensity and high-line press in a compact unit in order to win the ball back as quickly and as high up the pitch as possible, nullifying opposition offensive threat rapidly and limiting the transitional phase from defence to attack, thereby maintaining relentless offensive pressure.

NB: I would not recommend sacrificing core goalkeeping stats for stats that may enhance a goalkeeper’s ability to rush out and act as a ‘sweeper’ – if your defensive line is sufficiently pacey, they should be able to deal with through balls well for the large majority.

These instructions encourage retention of possession and building methodically and patiently from the back.

The attacking wing back of the tactic is one of the most important members of the XI. He is responsible for exploiting the space vacated by the AMR AP and providing width and acting largely as a right winger in the offensive phase, making him one of the team’s most crucial attacking assets. However, the WBR must also be defensively competent and athletic enough to track back and fulfil his defensive duties.

The left wing back will adopt a more reserved role in order to compensate for the marauding and attacking style of the opposite wing back and provide defensive stability and possession flow in build up. Whilst he should be at least competent technically and offensively, he must foremost be defensively sound.

When playing against weaker teams, it may be suitable to alter the WBL’s duty to ‘Attack’

The deep lying playmaker is hugely important in orchestrating attacks from the back in this tactic, yet must also be competent defensively. He often drops deep to receive from the CBs in the first phase of build-up and utilise his passing range and vision in initiating attacks. The DLP assumes the responsibility of dictating creative play and tempo from deeper positions, and is a player hugely important in exploiting the effects of overloading one side of the pitch that thereby vacates space of the opposite side with precise switching passes. He is also a valuable constant passing option, which is vital in sustaining periods of pressure of the opposition defence when in possession in the final third.

Player instructions:
- Dribble Less – the DLP should look to shift the ball quickly in order to maximise the advantages of overloads in offensive areas.
- Mark Tighter

The slightly deeper of the two APs within the XI, the AP Support shares parallels with the DLP in that his technicality and passing range, and his presence as a constant passing option are hugely important aspects in maintaining offensive pressure and initiating attcks. However, the AP Support is given more freedom and license to express, and is often at the heart of goalscoring moves, providing plenty of key passes.

The BTBM is one of the most important players in maintaining a high intensity, high line press, and taking advantage of the positional overloading/underloading of the tactic. His constant harrying of the opposition midfield embodies the ethos of high pressure that forces the opposition into being dispossessed. Offensively, the BTBM’s tendency to arrive late from surges from deep greatly aids the exploitation of the underloaded left side of the pitch, which often leaves the opposition struggling to shift sufficient bodies over to defend the space adopted by the BTBM, IF, and CF. He was also be heavily involved in build-up play in periods of sustained pressure on the opposition backline.

The AP A is the prime creator of the team, and assumes responsibility for delivering the killer ball of attacking moves. The ‘attack’ role, rather than a ‘support’ induces a tendency for the AP to run at the opposition defence from slightly deeper positions, thereby allowing greater involvement in build up. Additionally, as mentioned, the AP’s tendency to drift inside vacates space for the WBR to surge into, furthering the positional overloading of the right side. The AP’s frequent occupation of the right half-space is one of the tactic’s most important assets in attack, given the positional dilemma such presents to both opposition defenders and defensive midfielders.

Player instructions:
- Mark Tighter
- Roam From Position – allows creator to roam and find pockets of space they may be more effective in

Along with the STC, the IF is the side’s main goal threat. The frequent underloading of the left flank, which as mentioned leads to insufficient defensive bodies occupying the STC, IF, and BTBM, can prove devastating. The IF must be a clinical finisher and good off the ball in order to maximise the effects of mentioned positional overloading/underloading, and must also be technically sound in order to be effective in build up.

The CF is the spearhead of the attack, and as the name suggests, should be competent in all fields of offensive play. Whilst of course influential and important in the build up play of attacking moves, his primary job is to simply put the ball in the back of the net. 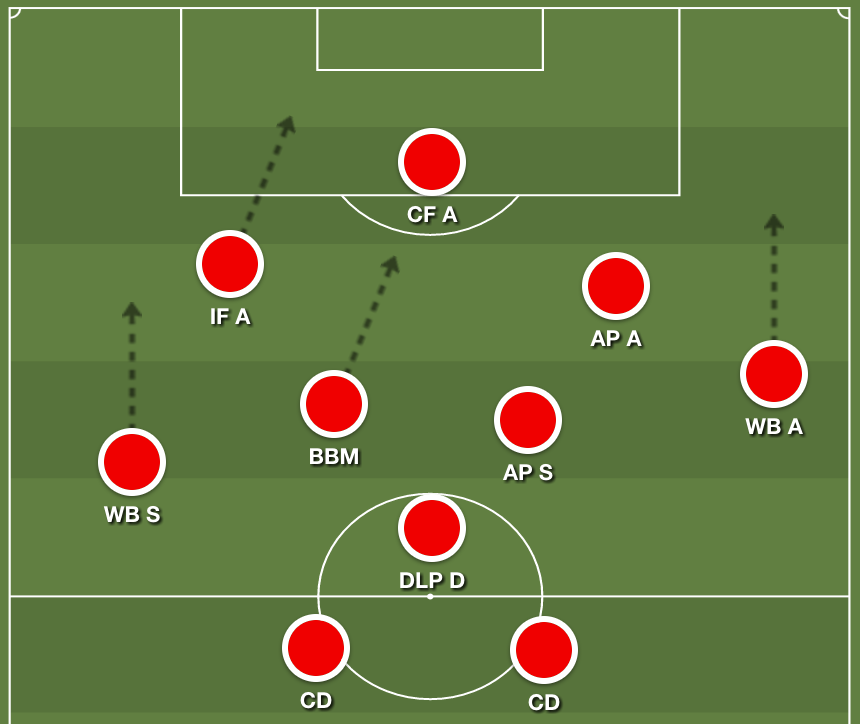 Positioning and movement in offensive phase 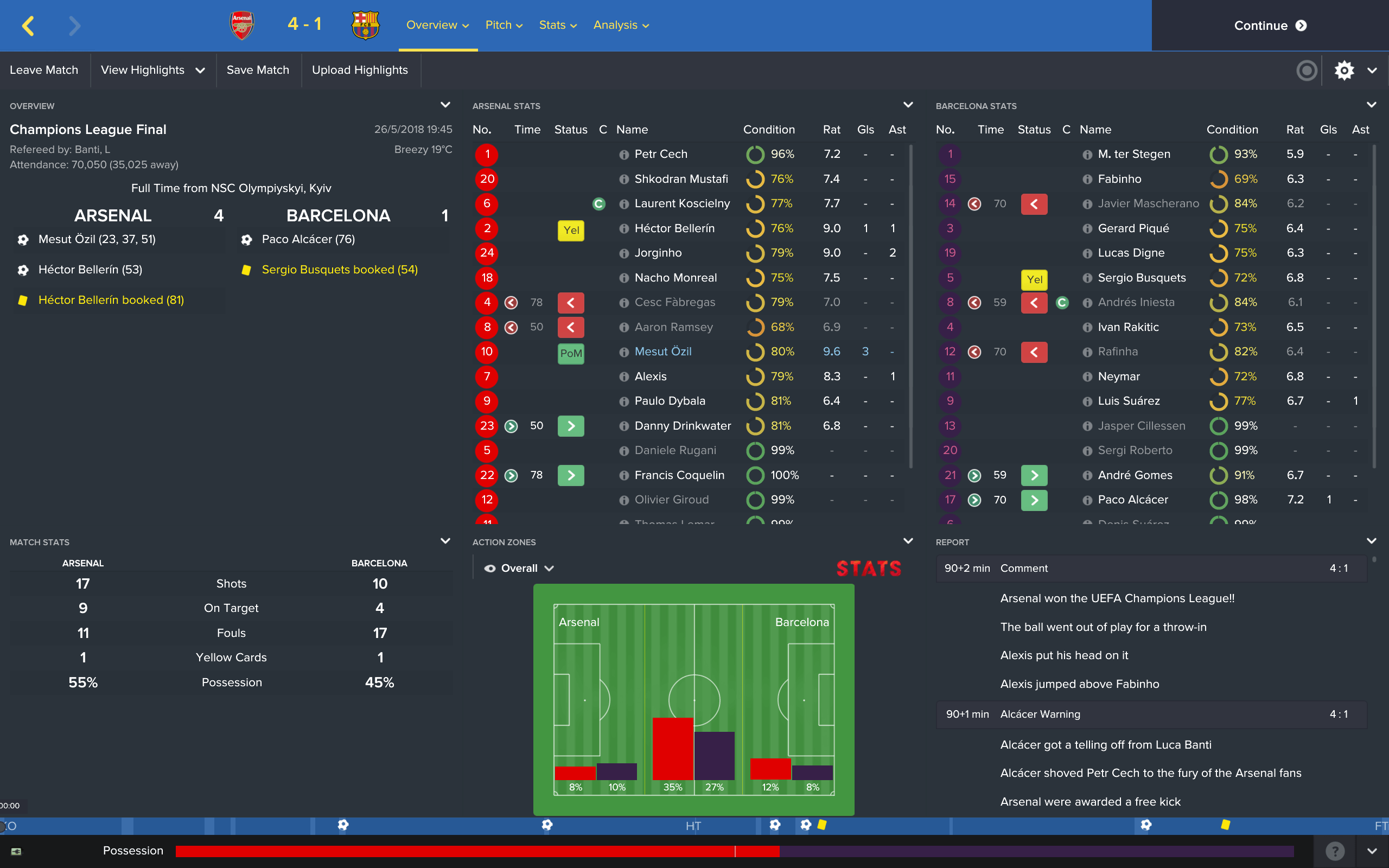 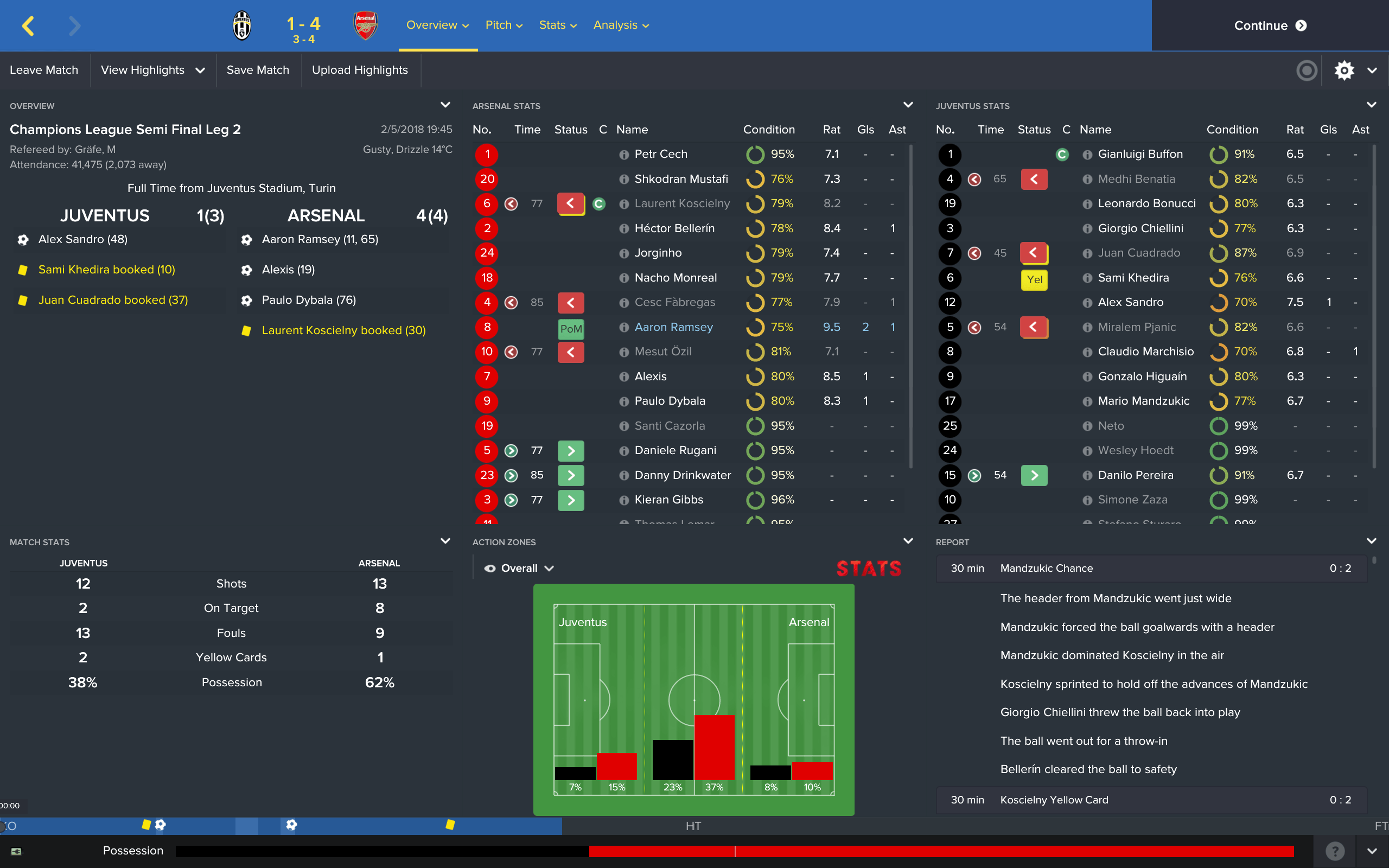 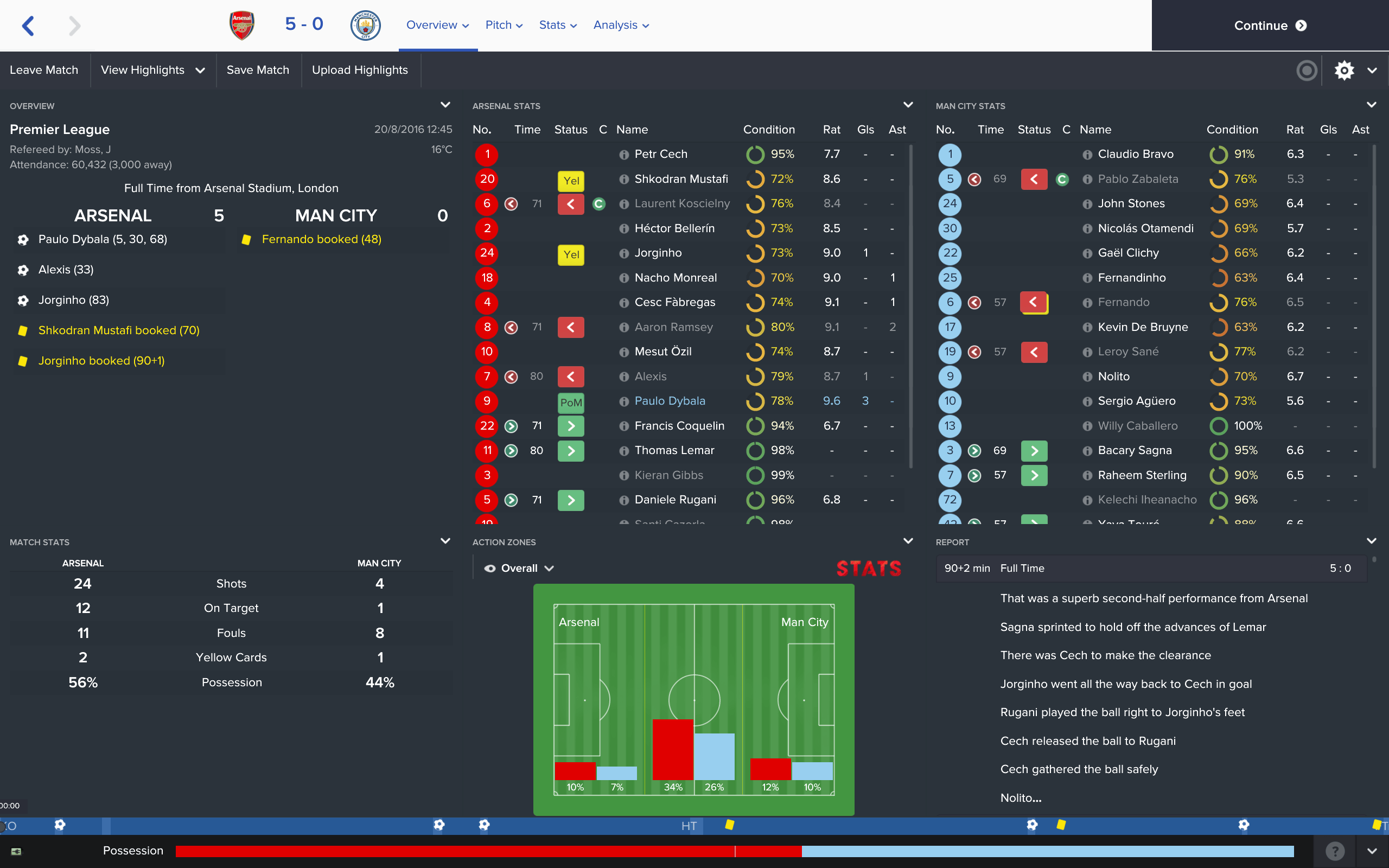 Showcases of tactic in use

- When facing particularly quick opposition forwards, it may be advisable to fall back slightly, instead adopting a 'slightly higher' or 'normal defensive line'

- When facing a 3-5-2/3-4-3 or similar formation that is heavily reliant upon the attacking threat of wing backs, I would suggest altering width to 'normal'

- It is also worth noting that wings can be alternated in order to accommodate the strengths or your players/availability of players to fulfil roles of the tactic. However, alternation should be done so in its entirety: if you decide to deploy an AP as an AML rather than AMR, you must also deploy the WB Attack and AP Support on the same side.

I would recommend this tactic as being most suitable for technical teams of strong standing in their respective division. Additionally, I must stress that this should be used as a guideline, and not as definitive instructions - alter roles and instructions accordingly for the players you have at your disposal.

If you would like to donate, follow this link, but I assure you this is entirely free to use and composed from my love of football and F.M.

"Football is a game you play with your brain." - Johan Cruyff

29 comments have been posted so far.