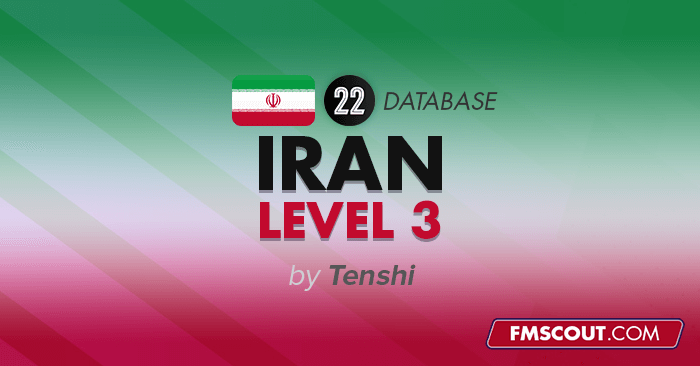 This database is compatible with any other databases.

Because there is not lots of informations in english, I had to get most of the informations in persian (I used translator so there might be some things wrong), so if you have more information, you can send it to me and I will make the database even better.

Hazfi Cup - winner goes to AFC champions league (or AFC cup depends on coefficient), schedule is based on season 21/22

U21 Premier League it is only for teams in Persian Gulf Pro League, it is created from one of the defunct leagues so database can be compatible with other ones

Premier Youth League (U19) it is based on real life U19 league, two teams that play it normally are not in the db so they were substitude with other two teams. Winners of each group play for the title, two teams relegate to First Division, it is created from one of the defunct leagues so database can be compatible with other ones

First Division Youth League it is based on real life U19 league but because I saw only pictures of tables I couldn't figure out names of teams, so it is 28 teams in 4 groups where 4 best play play off for two promotional places and teams at bottom relegate to regional division youth league, it is created from one of the defunct leagues so database can be compatible with other ones

I simulated more than 10 years and everything works fine.
If you like the database you can look into my workshop for some other nations or giving it a like.