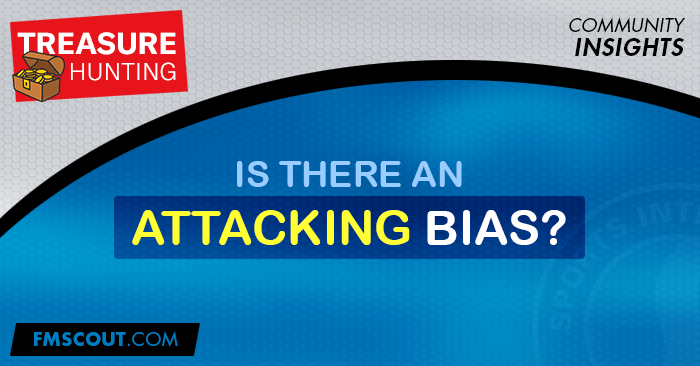 In our Treasure Hunting series, we scour the Football Manager community for fascinating discussions that could inspire your FM sessions and improve your managerial skills, or at least make you think.

Based on a discussion from the Sports Interactive Community forums, we want to explore the question, “Does Football Manager favour attacking tactics over defensive ones?”.

Whatever your initial response, the question posed led to several insightful arguments about how to be successful using defensive tactics in Football Manager and why we might perceive the game as favouring attacking managers.

Thanks to DiStru_ for asking this question.


Those who have heard the saying, “Attack is the best form of defence” might think it’s logical for attacking tactics to reward those who employ them. And any manager who is confident enough in their team to go out and attack most likely has the luxury of knowing his team is good enough to take that risk and can score more goals than they concede.

“They trash their opponents without fail. It’s boring.”

The original poster says ultra offensive tactics should leave managers incredibly exposed in defence. But, for example, the Gegenpress is a tactical style that can facilitate playing attacking football while being able to win the ball back quickly.

Of course, it also depends on the team you are managing and teams vary massively in terms of strong and weak areas. However, from managing some of the weakest and best teams in Football Manager over the years, I have found you simply have to adapt to make the best of the tools you have and try to bring in better players as soon as you can.


Now, I want to ask, why would anyone use a defensive system and aim for 0-0 draws and 1-0 wins unless that is all their squad is capable of? But if that is your only option, then I think playing defensively is the only way that makes sense.

The only situation I would aim for these sorts of results is if I had to, if I had a squad with a lack of attacking threat. Even then, you need some good defenders and a good goalkeeper to achieve clean sheets on a regular basis. In this sense, playing defensive football and claiming narrow 1-0 wins could be one of the most difficult things to achieve in Football Manager and real football.

Is keeping clean sheets and playing defensive football actually more difficult than going very attacking? Maybe that’s why few FM players try it. But this could be a universal characteristic of football, not a flaw of Sports Interactive’s simulation.

On the other hand, we now have the defensive forward role, which gives weaker teams another option, and could allow them to get even more men behind the ball and/or pressing to win it back.


Sporadicsmiles thinks more like me, also preferring to worry about how solid his team’s defence is before building creativity and attack. They go on to describe possession football as a defensive style, which I understand but I could argue against, and this goes to show how subjective approaches to tactics can be. We can build a strong argument using statistics and expert opinion but there is almost always several ways to see an approach to playing the beautiful game.

For example, I could play on the counter-attack every game, but if I have the three best forwards in the world and we score twice as many goals as anyone else in our league, we will surely be seen as a dangerous attacking force. Now, if the opponent is aware of my team’s attacking talent it’s unlikely we will be able to use counter-attacking so effectively, and maybe we would use the Gegenpress or Tiki Taka football.

Sporadicsmiles goes on to explain why defending in the traditional sense can be risky and difficult to employ successfully.


Truly defensive tactics when there is no other option.

In a situation where you know your strikers, if you have any, are very poor compared with their peers in the same league, an all-out attacking style just isn’t going to work, so you will be forced to get creative.

Maybe you could focus on set pieces? Either way, you should always build your tactic around your team’s strengths or bring in players who suit your preferred system as soon as you can.

No tactic is perfect. Every one has holes. However, you can see why resorting to a mainly defensive style with a low line of engagement, which gives up a lot of space to the opposition, makes less and less sense in the modern game and on Football Manager.

Before, when Gegenpressing high up the pitch and in packs didn’t exist in the same way, teams could counter against apparently stronger teams who attacked too much or gave the ball away and couldn’t recover.

But now, defenders tend to be quicker and can chase back better, and the high press engages as soon as the ball is lost, putting pressure on players who in the past would have had more time to play the ball forward.

I appreciate the original poster asking if Football Manager favours attacking tactics but I have to say I don’t think it does. I simply believe playing in a very defensive style has become more difficult than ever – in Football Manager and real life – as teams constantly conjure up new ways to attack and score goals, as players get fitter, and more teams press high up the pitch making it especially tricky to counter attack.


If you have created an ultra successful, ultra defensive tactic, please let us know. We would love to hear about it.

Discussion: Is there an attacking bias in Football Manager?