Good morning from your magicomonta,

Today I present to you a new tactical emulation everyone has heard about. The coppa del mondo of Spain '82 won by the nazionale Italiana di calcio of Bearzot.

TACTICAL ANALYSIS
Bearzot's team lined up with a 352. 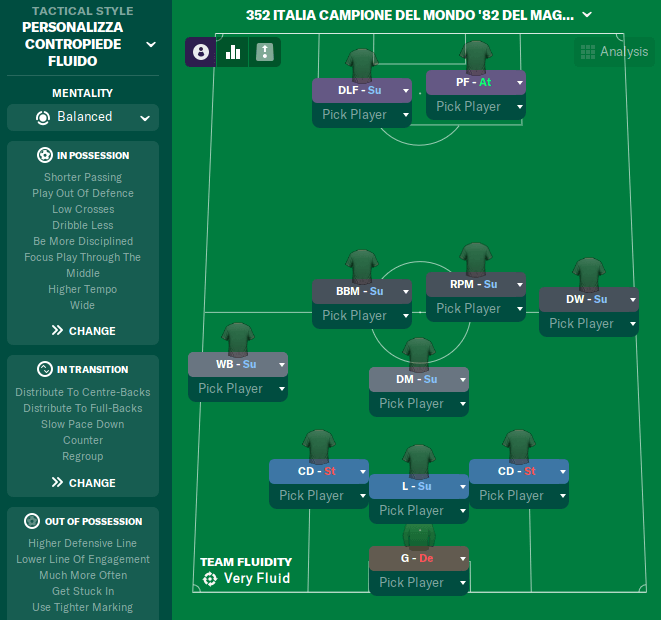 Zoff was a classic goalkeeper of the times, zero feet, also because at the time the back pass could be taken with the hands so in #footballmanager his role will be a classic defense goalkeeper.

The 3 defenders were #scirea, innovative free with license to attack, carry the ball and give cover to the two scorers (vierchowod, bergomi, gentile, collovati) were very aggressive on the man, in all-field marking sure that the few times that they could not anticipate there was the great Scirea who covered them, very good at reading the opposing actions light years ahead. He was always the one who started the blue actions and did not disdain offensive rides.

On the flanks the two winger were different from each other, on the left there was #cabrini, full-backs very good with his feet and in the push phase on the other side brunoconti, a winger who acted as a full-back in the phase of non-possession but who with the ball and chain was a dribbling winger, assists and an amazing goal that made the difference.

The three midfielders was a median (#oriali) very good at acting as a dam in front of the defense, recovering the balls and carrying them forward and then serving the more technical and inventive players such as #antognoni who was the all-court playmaker, the mind of this national team.

The third but not least of the three was #tardelli, the box to box midfielder, who had to recover the ball in the defensive phase but also had to be very good at entering the offensive phase as he was very good at shooting from outside.

The two forwards were #pablitorossi and #cicciograziani or #altobelli.
The first a very good striker in attacking the penalty area, a true raptor of the area but at the same time he helped a lot in the defensive phase returning and bringing pressure on the opponents.

The other #graziani was a second striker who played in the center left, also good at coming towards vercalemnte and also horizontally going to widen towards the left zone but also good at being ready in the penalty area.

The team's maneuver consisted in recovering the ball and quickly, but with organization thanks to the versatility of its players, going up the field very quickly to find the opposing defense uncovered. The team did not press across the board but retreated into its very short half field and with suffocating pressure on the opponents once they entered their own pressing line.

I played that world championship, I won't tell you how it went, find out for yourself in this video.


The team did not press across the board but retreated into its very short half field and with suffocating pressure on the opponents once they entered their own pressing line.