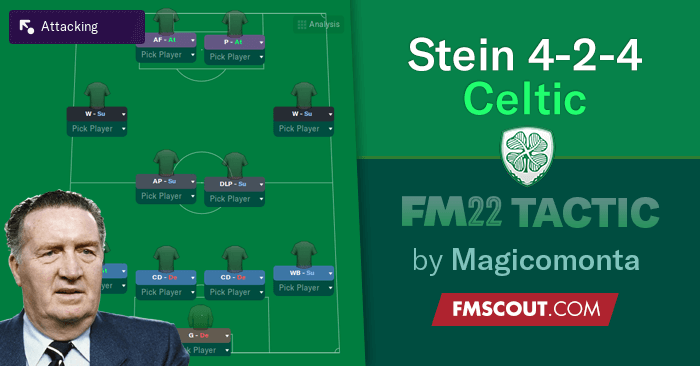 Today magicomonta presents the story of a person who, as they say, "HE MADE IT IN LIFE" and the story of "BIG JOCK" better known in the books of the most successful coaches of all time such as Jock Stein who with his Celtic he won all there was to win and will be the first team in history to do so in the same season.

Stein was born on 05/1/1922 in Hamilton in Scotland Starting to earn his bread as a miner, learning the trade from his father then, and his grandfather before, in North Lanarkshine being very proud of it often speaking in his interviews about how this experience is to him then served in the hard world of the ball and vice versa as the ball saved him from that hard life.

He imposed himself as a footballer in the Albion Rovers as a defensive center and then moved to Celtic by winning a championship and a cup.

Big Jock was a one-piece man, a model man, he didn't smoke, he didn't drink (which is incredible for a Brit) and he began his managerial career in the Celts youth team but despite the excellent results he was removed from the club because of faith; Protestant (one of the city "rivalries" with Rangers is due to religion since they are Protestants while the green-and-whites are Catholics) and this could not be tolerated so Stein decides to restart from the modest Dunfermline where he succeeded in his first enterprise of his career by saving him and winning the national cup and then closing in the following season in 4th place.

These results earned him the call of the Hibernian and his personal revenge as Celtic, with a lot of excuses, call him back to the bench to lead the first team that hasn't won anything since before 1926... if you want to continue reading my article click here because unfortunately it is too long to put here.

The 11 regulars of that company:
Simpson between the posts.
The two defenders were Clark and captain Mcneill.
On the flanks there was the right-back who was very good at pushing in the attack phase Gemmell and on the left there was #craig always pushing but less skilled than his team-mate.
The direction, because we had to talk about this since both were directing the maneuver were Murdoch and Auld.
In the flanks there were two very skilled offensive wings like John Stone and Lennox.
The attack was completed by Chalmers, a fast forward, very good at attacking and running around walking the opposing defenders, while the other was a goal machine, a monster of the penalty area like Wallace.

Explanation of the tactics in the video.


Dry season results in the 1966/67 database as always without transfer market, without training, without turnover except for suspensions or injuries: