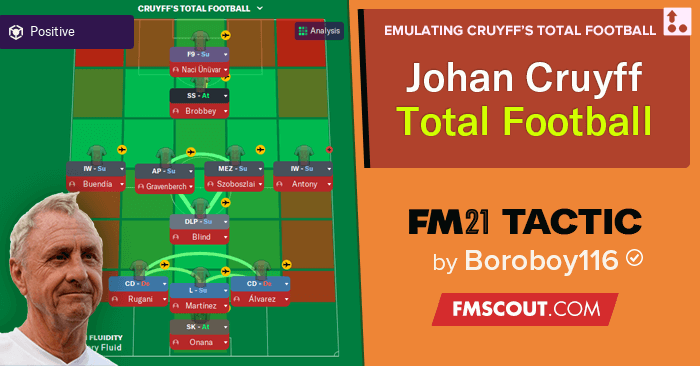 
Johan Cruyff was a pioneering coach who believed in playing a fluid and attacking style of play, with all players responsible for attacking and defending. The principle of total football is that each player is capable of playing any role on the field. Cruyff instructed his team to play with intelligence, freedom and enjoyment producing beautiful football with extraordinary results. 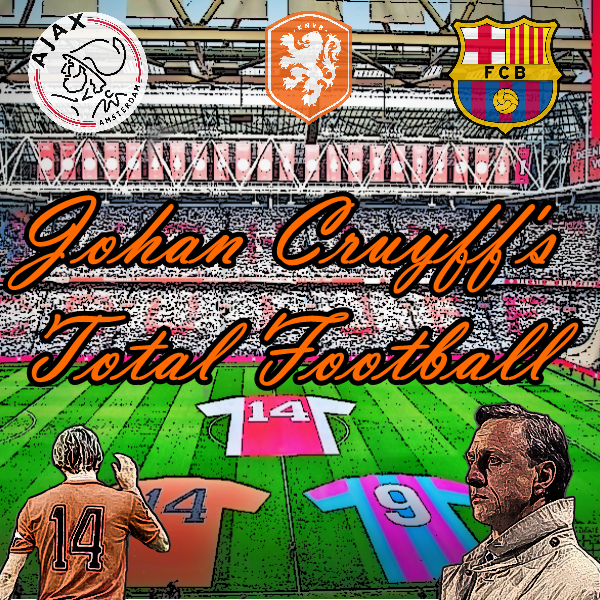 Total Football is most commonly thought of in relation to Ajax and the Dutch national teams of the 1970s, however, its origins can be traced back decades before to the Hungarian national team and Jack Reynolds prior. It can be argued that no other style of football has had as much influence on modern football than that of total football. There are two key concepts at the heart of total football these are the use of space and its fluidity of positions. It was said Rinus Michels perfected the style with Cruyff then taking it to new heights during his 10-year managerial career with Ajax and Barcelona. 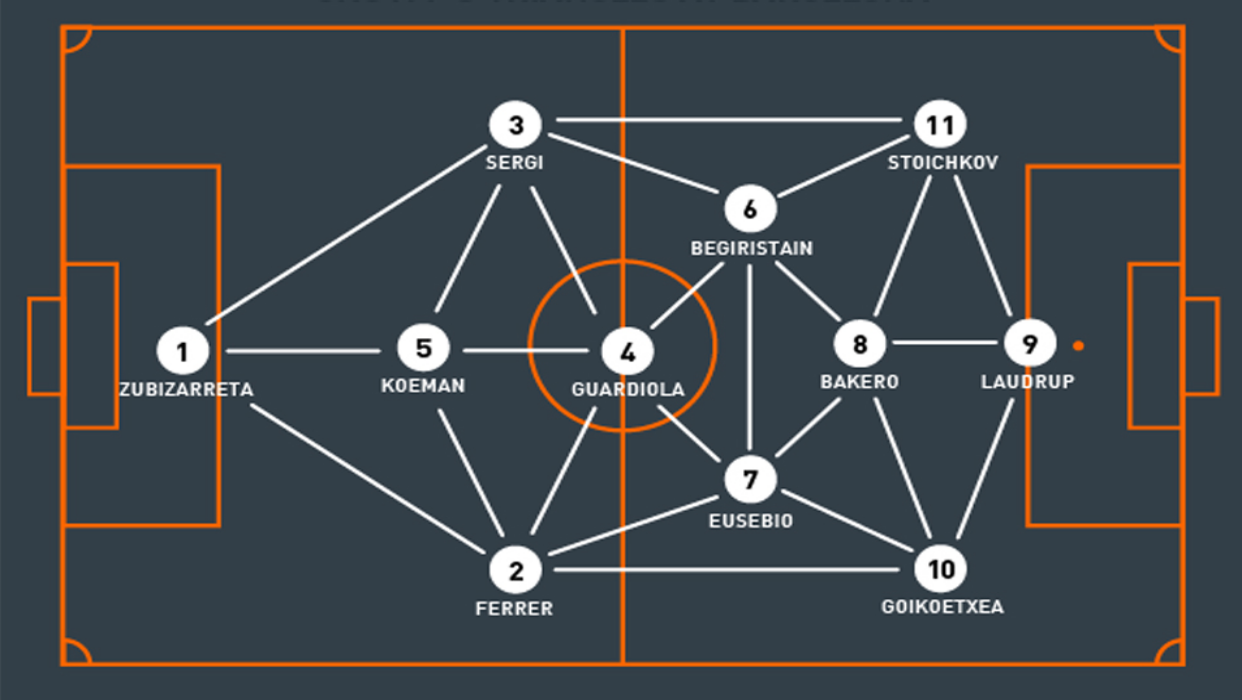 Guardiola was key to the success of the system, he was the pivot that allowed the rest of the team to roam around him. He was instructed to take the ball and give the ball dictating the tempo of play. Cruyff also instructed his players to always give the man on the ball two passing options, thus creating triangles all over the pitch to circulate the ball at ease.

Cruyff believed that playing with 4 at the back was a waste. Since most teams played with 2 strikers, having 3 defenders was enough to outnumber the opposition. The spare defender allowed Cruyff the luxury of having one more midfielder forming the diamond and one more striker. Thus creating the 3-4-3. The priority is to build play from the back keeping possession whilst widening the pitch. The diamond midfield gives the libero plenty of short passing options. The libero can also hit diagonal balls to the wingers as Cruyff was not afraid to go more direct when the opportunity presented itself as he hated possession with no intent.


Cruyff's principles and system were all about winning in the most attractive way possible. In order to achieve this, he created the 3-4-3 with the aim of creating overloads to move the ball upfield before eventually scoring. His teams were fluid and would interchange positions regularly throughout a game. 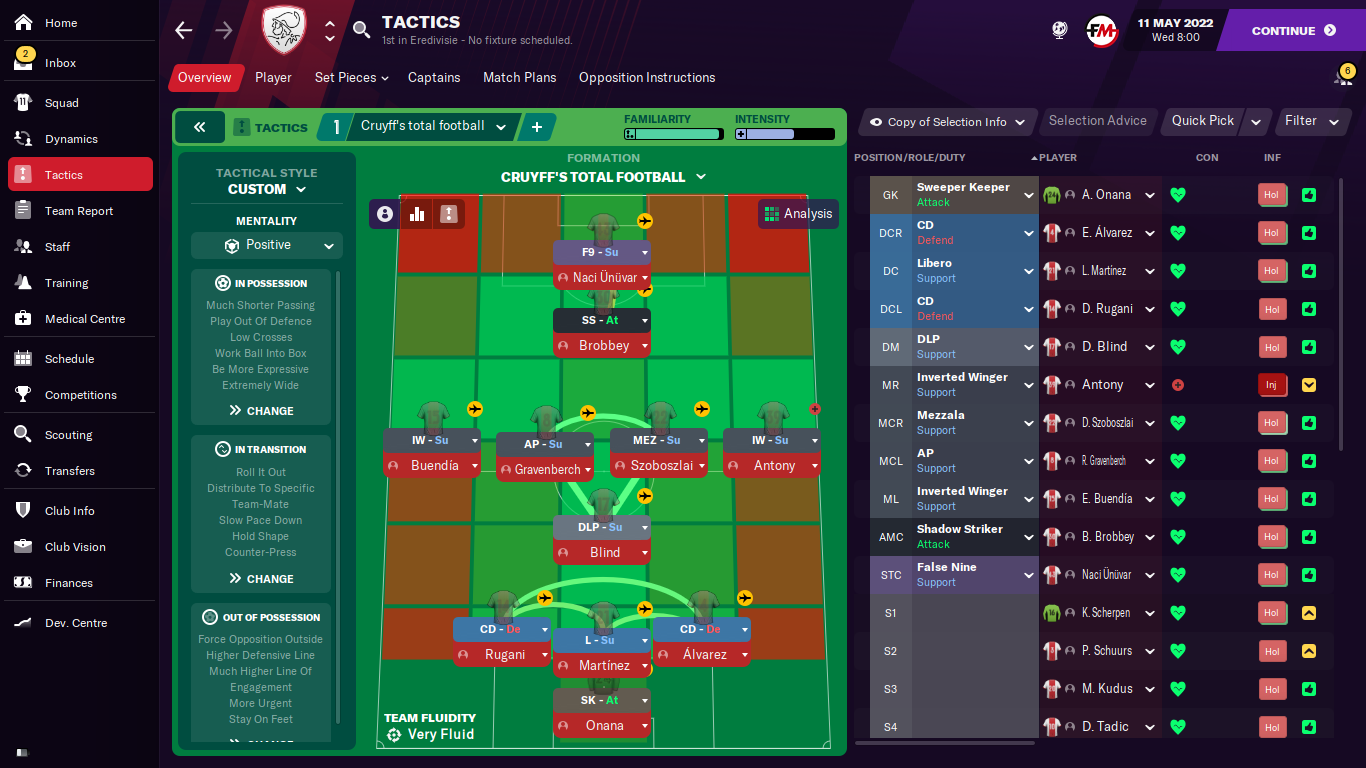 His 3 central defenders along with the goalkeeper would easily outnumber attackers which allowed them to play from the back and build attacks from deep. Cruyff used Koeman as the libero he was able to step into midfield with his technical skills and switch the ball to the flanks when required. The outside CB's were fullbacks who could offer width. His midfield diamond would dominate the centre of the pitch allowing for intricate passing networks. Perhaps the greatest tactical innovation Cryuff used was the false 9 role given to Laudrup.

Laudrup was a technical and intelligent footballer who was a fantastic playmaker often played in the 10 role. Laudrup embodied the positional style of football Cruyff craved, now operating in the false 9 role he was able to create space for the wingers and SS to exploit. He offered the midfield even more numerical superiority and he would often be found in line with the wingers and SS. One of the principles of total football and that of Cruyff was to make the pitch as big as possible with the ball, therefore to replicate this I have used the extremely wide option. This will ensure the opponent has to cover a larger distance and as a result, there is a higher chance of gaps appearing in their lines. Cruyff also wanted his players to remain close together to ensure they could dominate and move the ball, as the man on the ball would have at least 2 passing options. 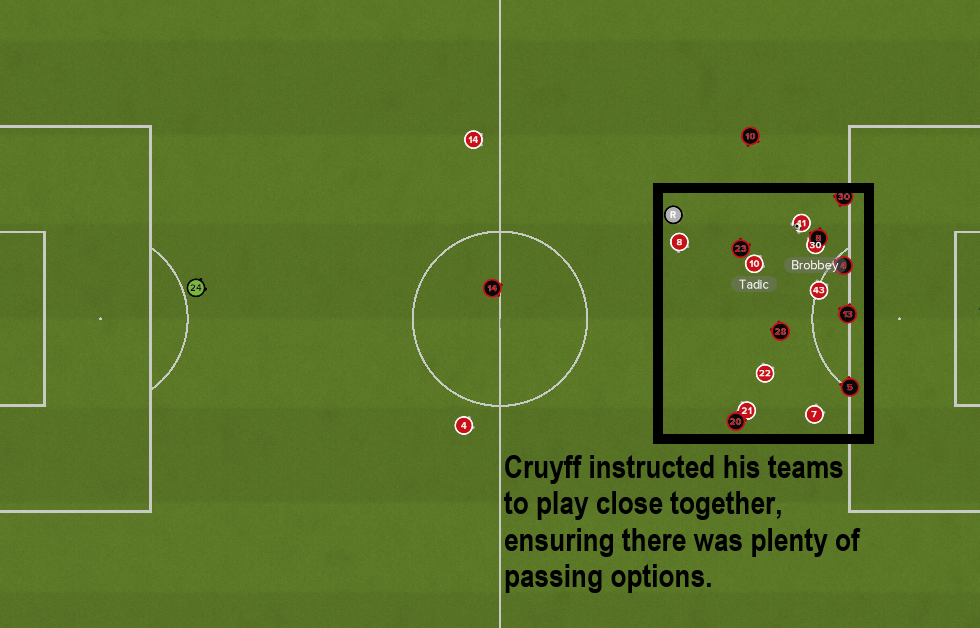 As the tactic is deep-rooted in the total football philosophy its therefore key that players will express themselves and move freely from their positions, these interchangeable movements cause all sorts of problems for opposition especially when they try to use a man-marking system. I, therefore, have used the be more expressive instruction to mimic this as best as the match engine allows. 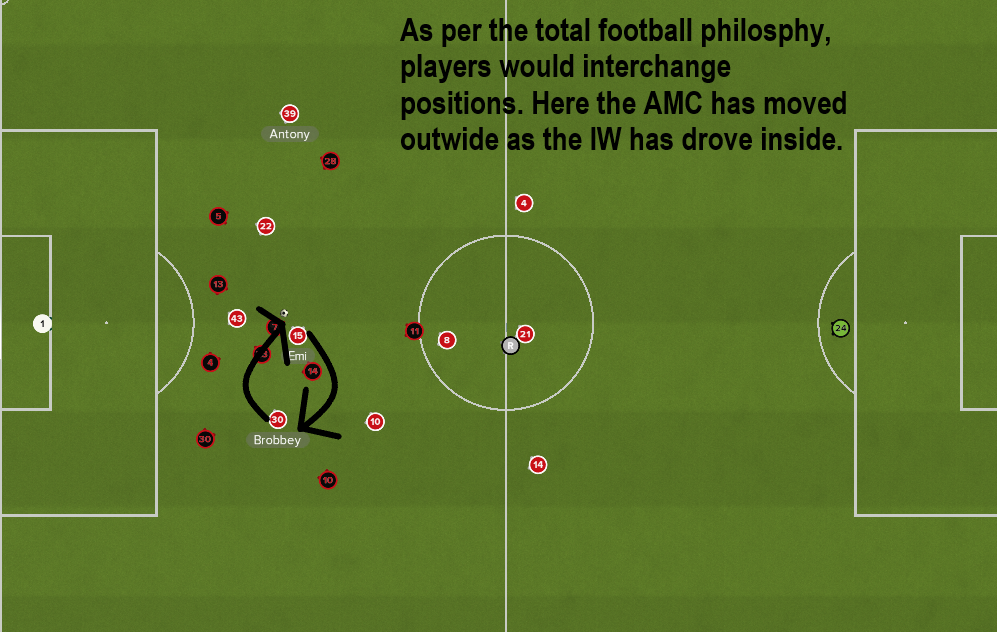 The team holds its shape when the ball has been one to help with the possession style football, also given the attacking nature of the tactic using the counter instruction would leave one exposed defensively. However, as you can see from the video above that doesn't mean you won't counter at all. 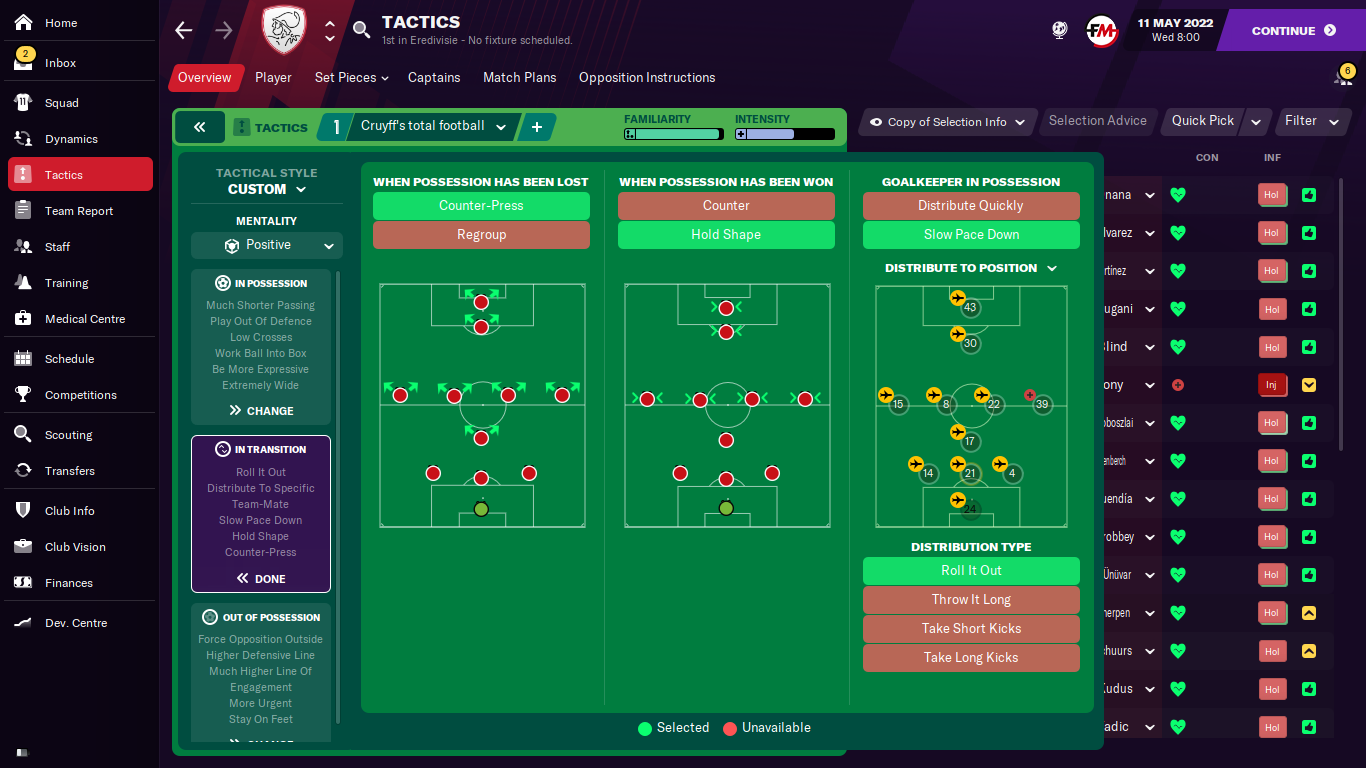 Pressing is at the heart of a total football system, the philosophy is opposite to that of when in possession with the aim of making the pitch as small as possible. To do this a high press is used along with higher lines in defence and engagement within a zonal system. The aim of the high press is to cut off passing options and force the opponent into a mistake, either a direct turnover due to the pressure applied via an interception from the risky pass or from them kicking the ball long. 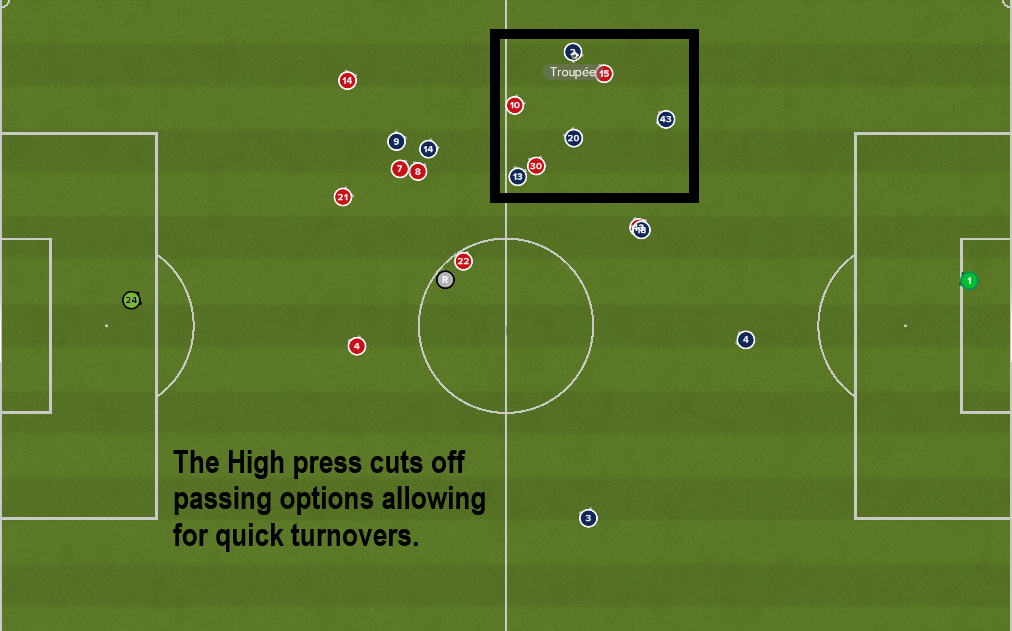 The team works in unison forming a compact defensive block, enabling them to cut off one side of the pitch squeezing the opposition whilst simultaneous applying pressure to the ball carrier by surrounding them into a mistake. 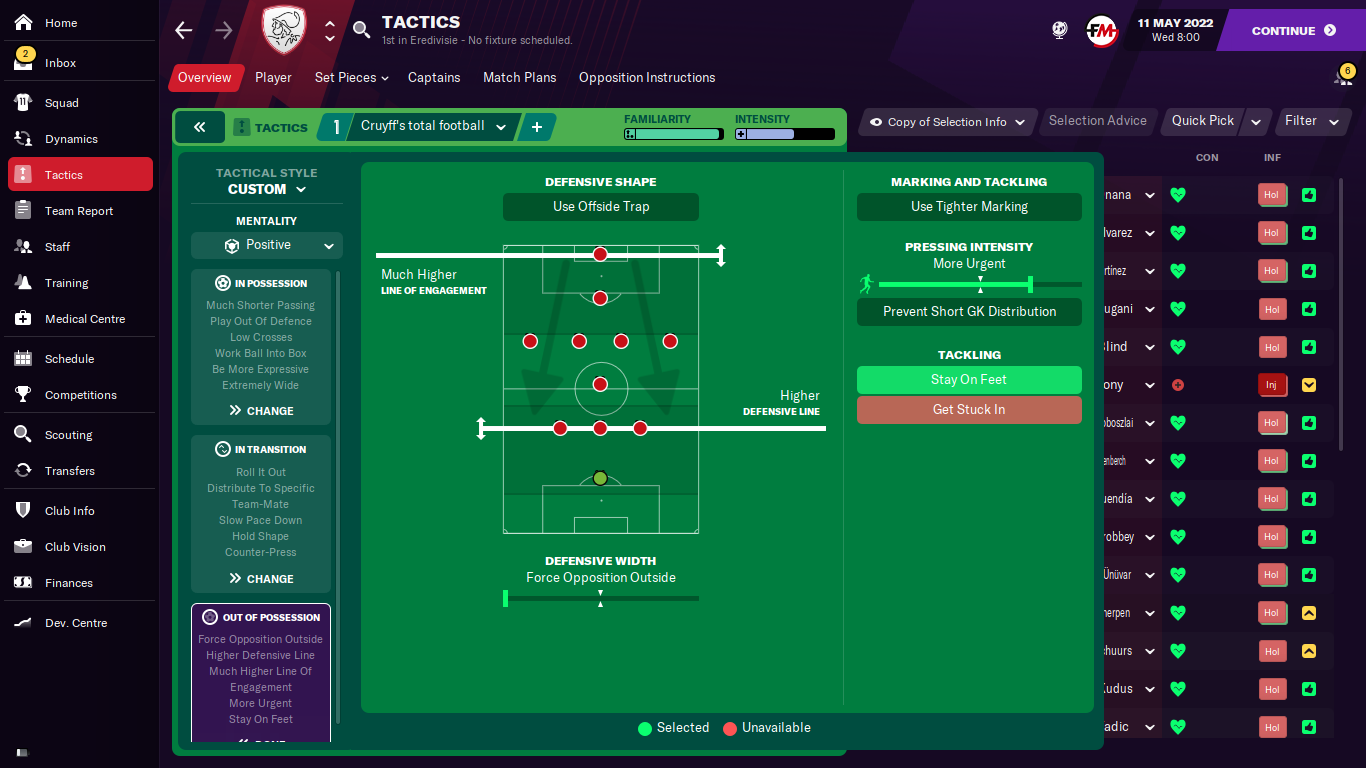 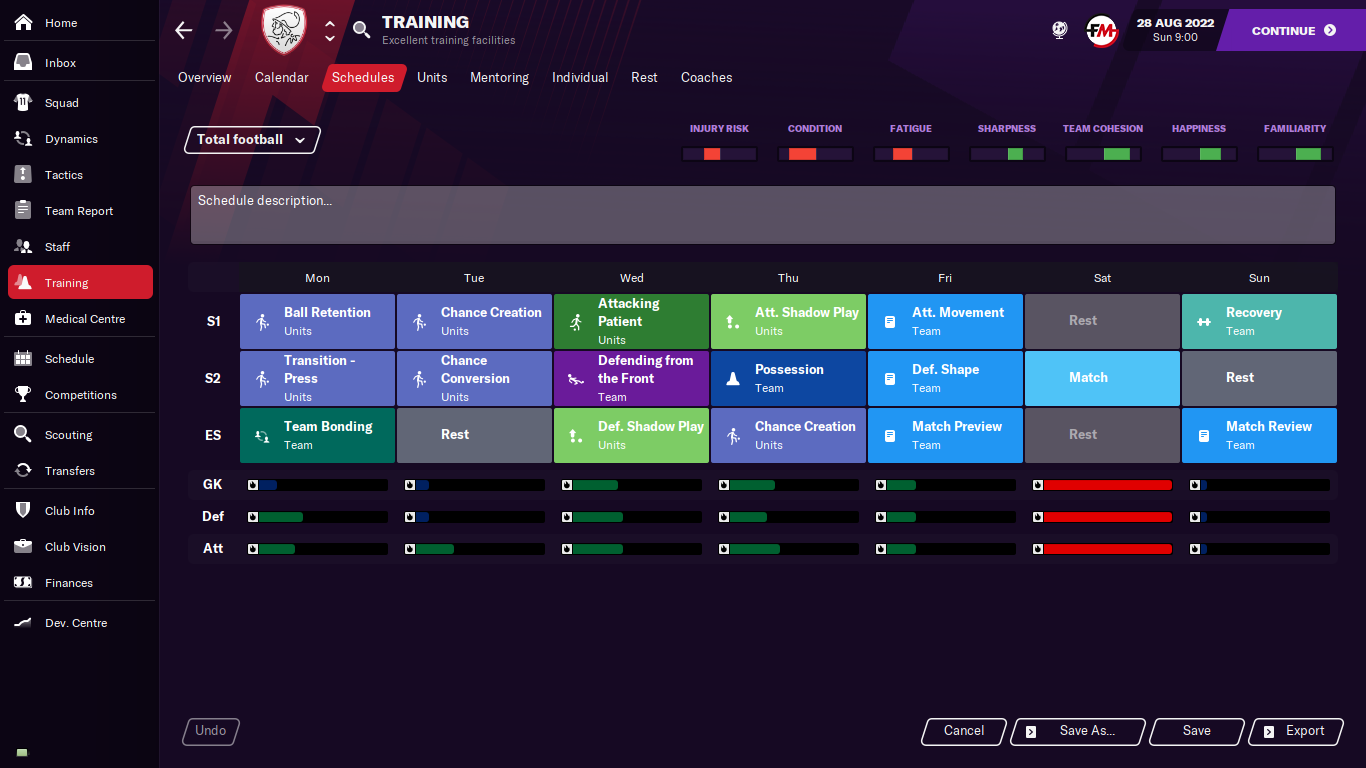 
Great results in the league and domestic cup as expected, dominating the ball with over 4000 passes more than the next best team. Quarterfinals of the champions league were achieved knocking out Barcelona along the way before losing to City. 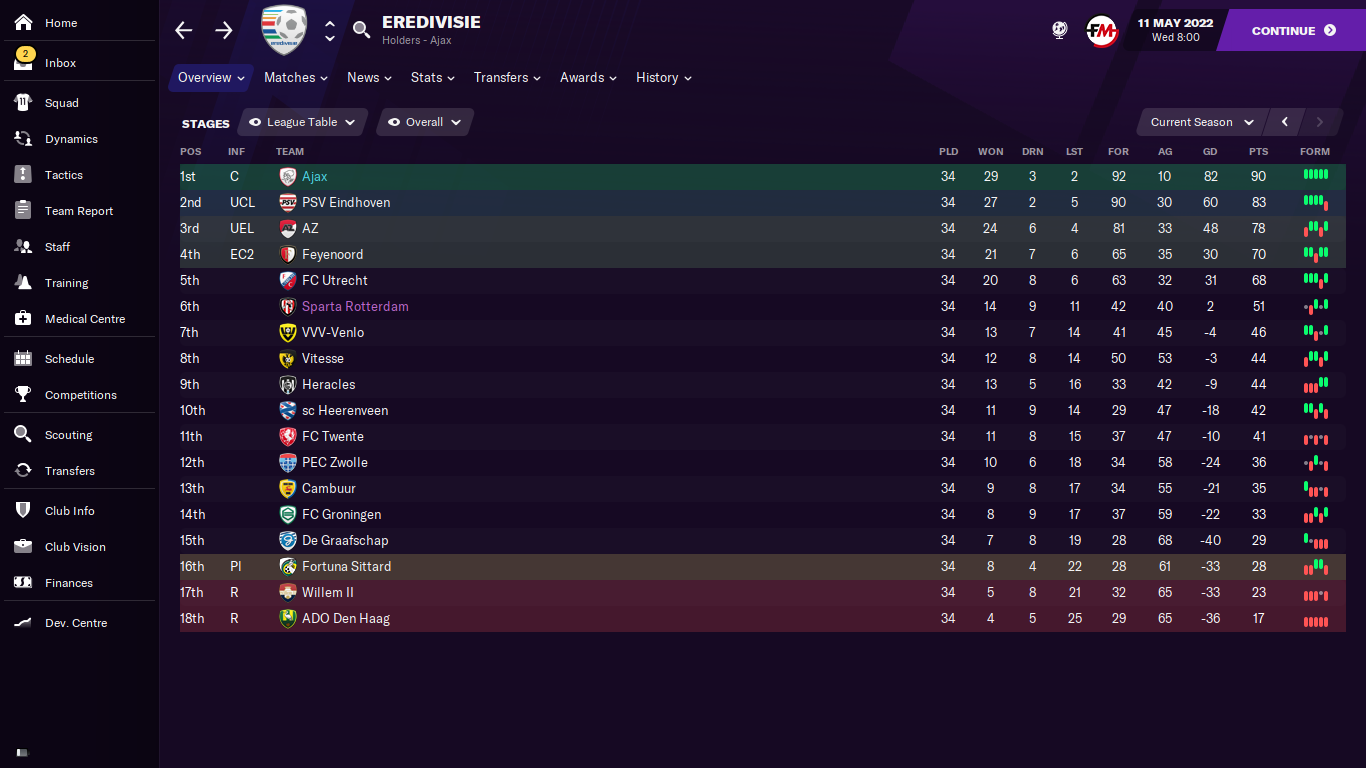 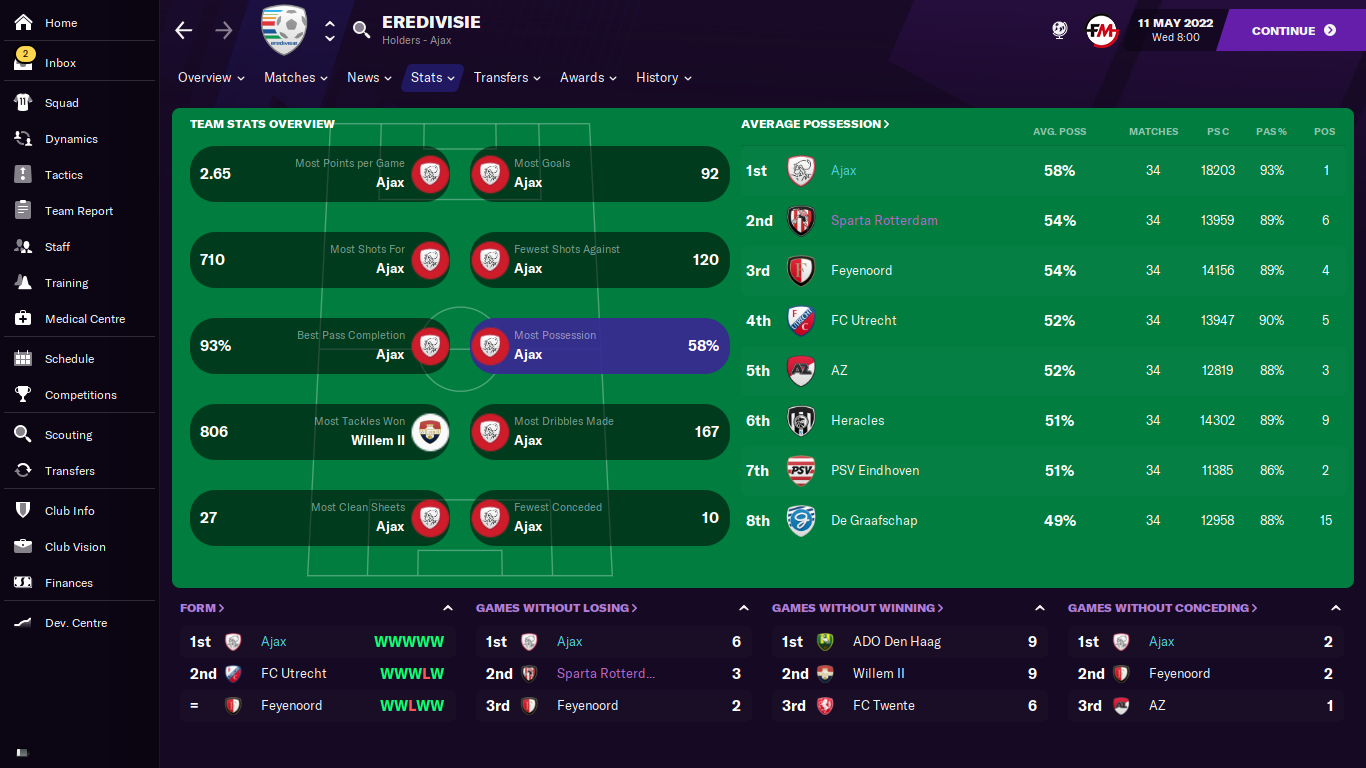 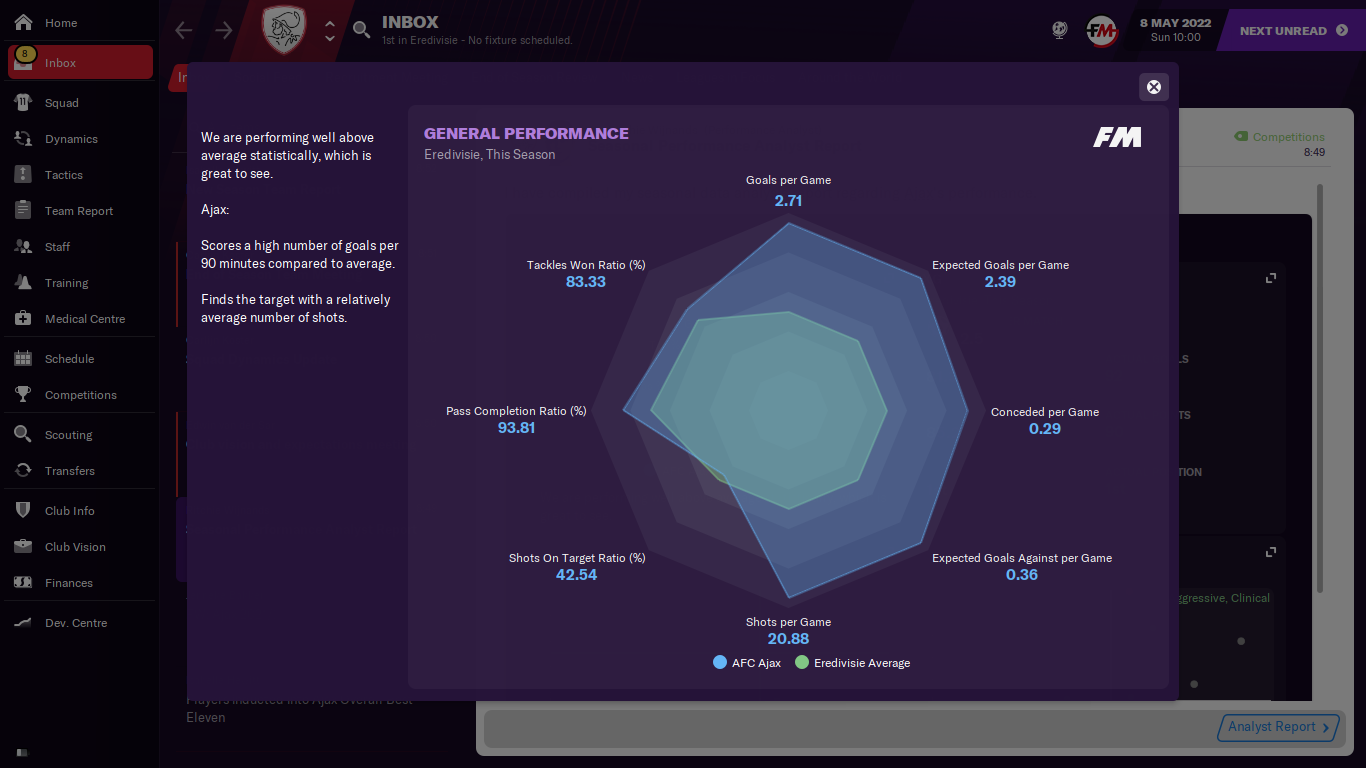 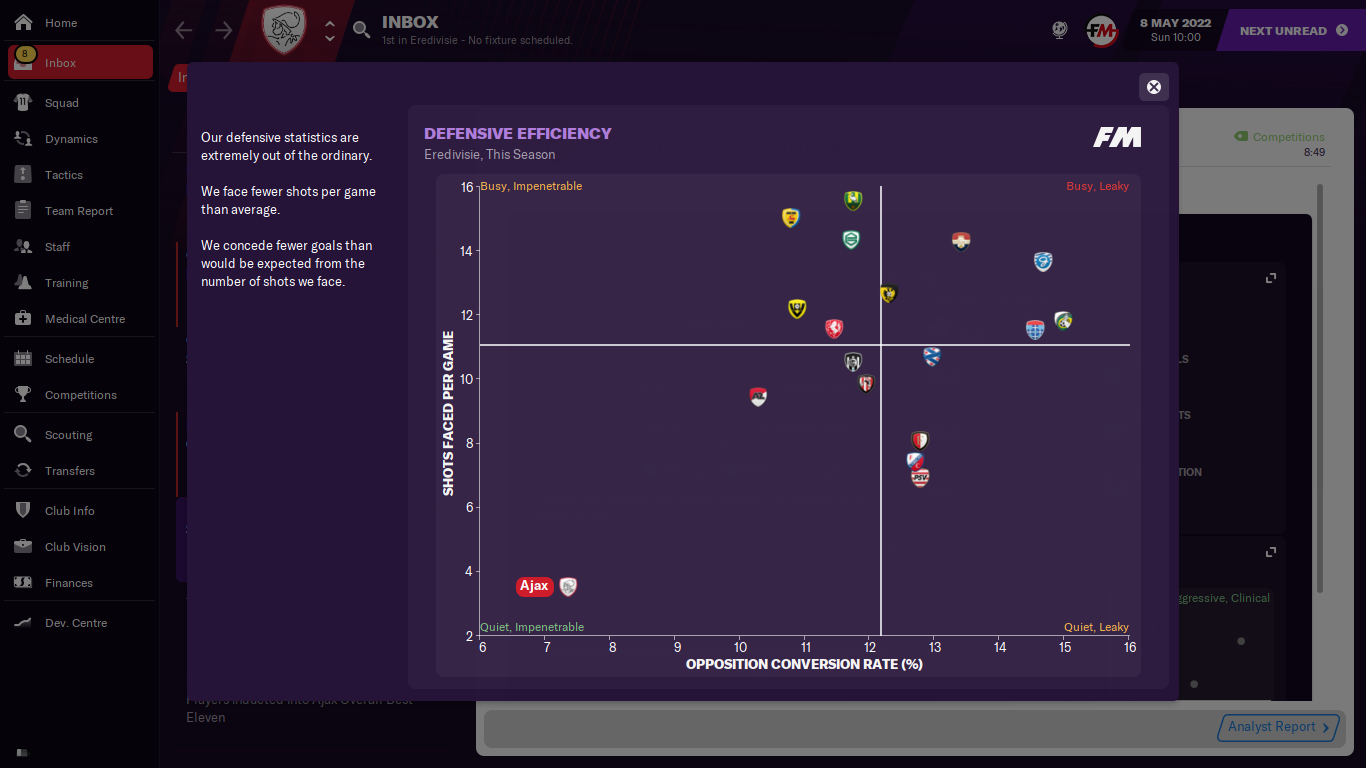 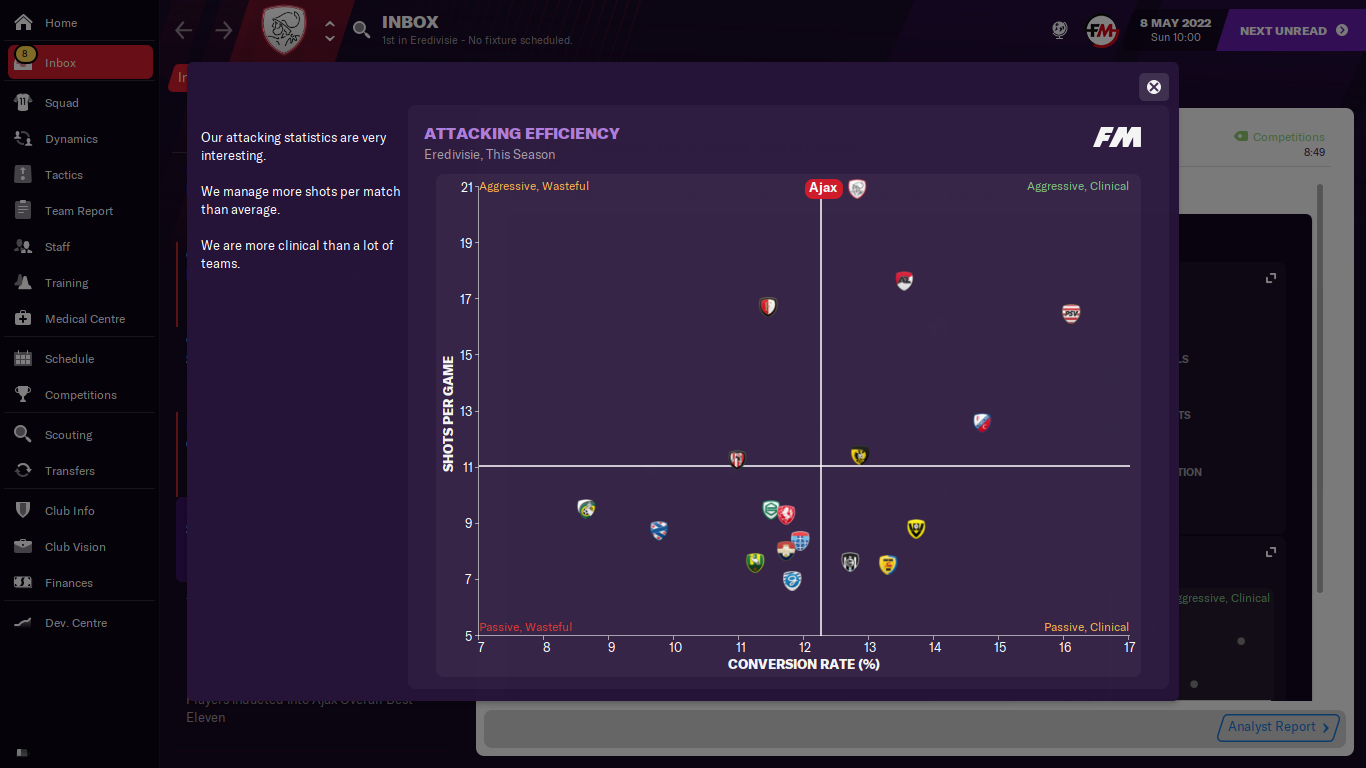 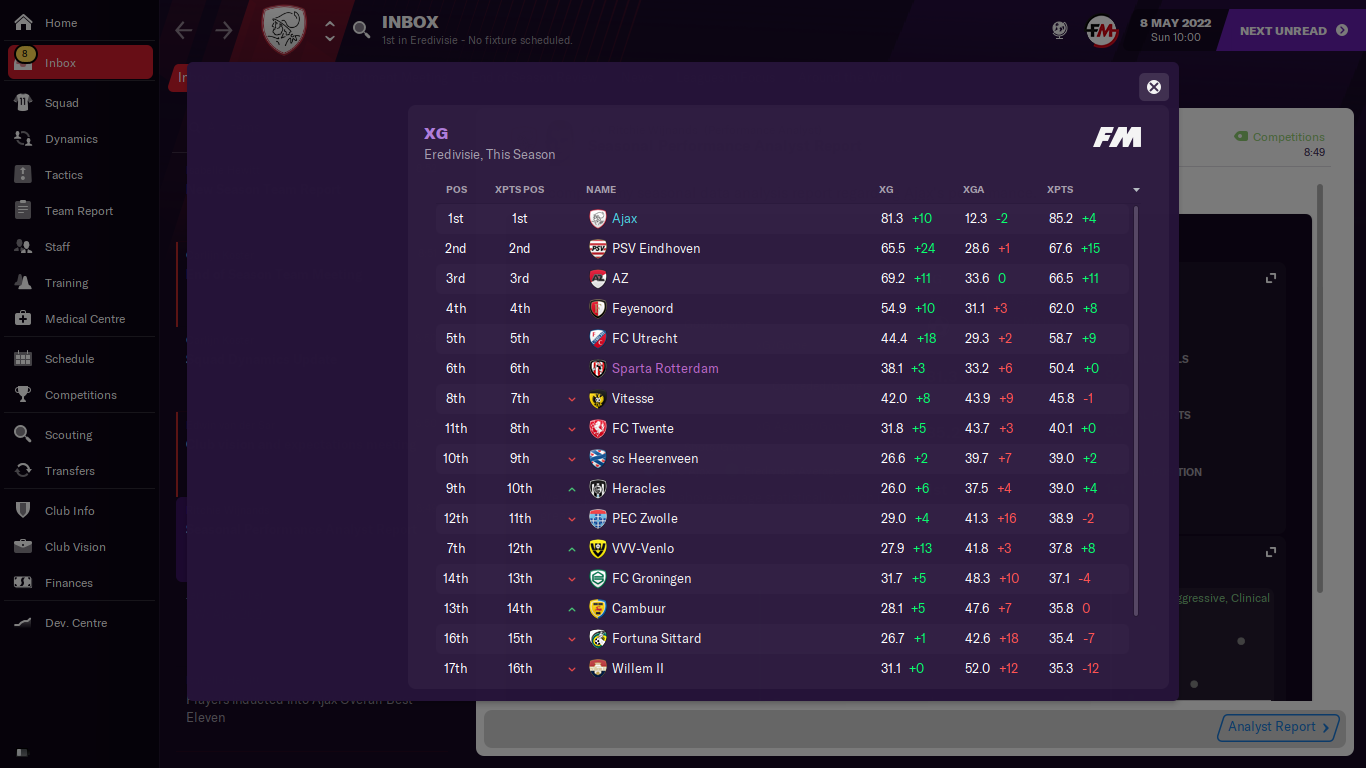 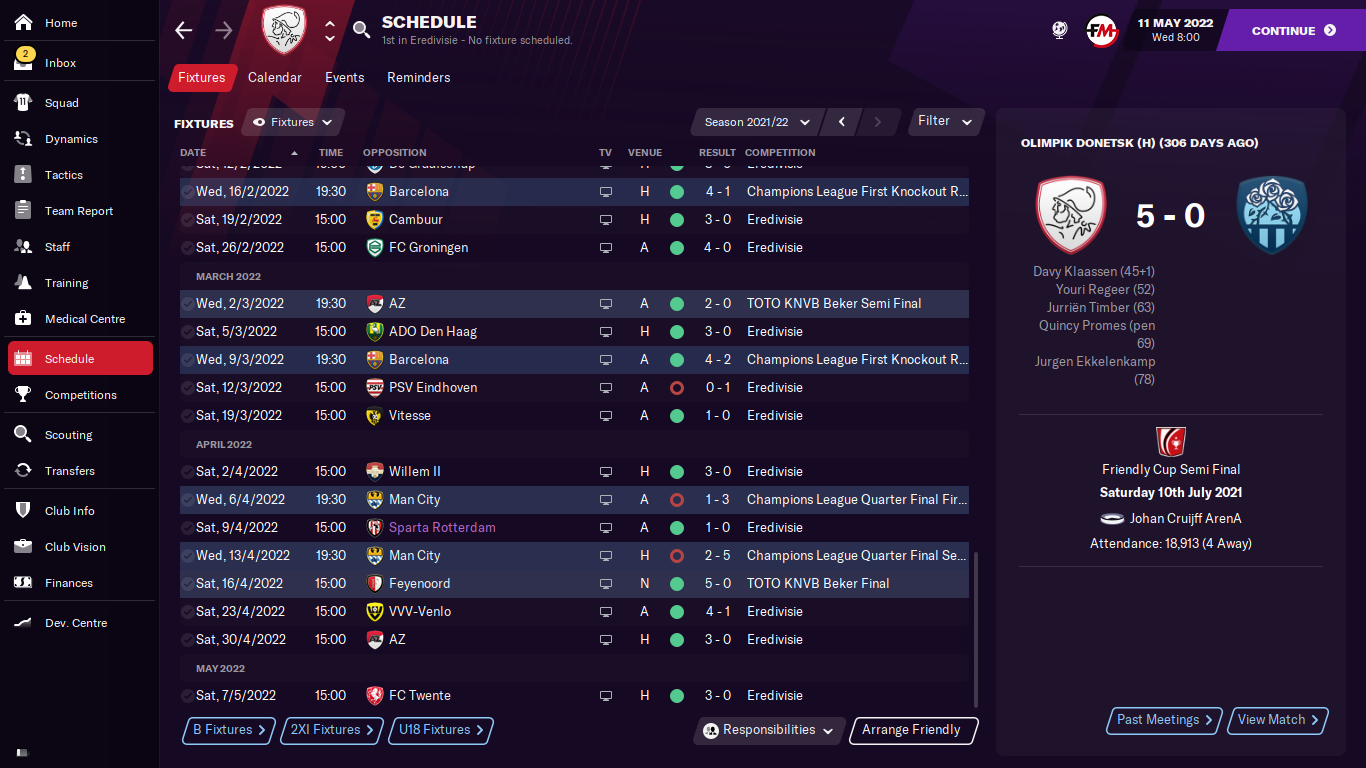 How to Find the best Newgens on Football Manager

Mezzala? I barely know her!