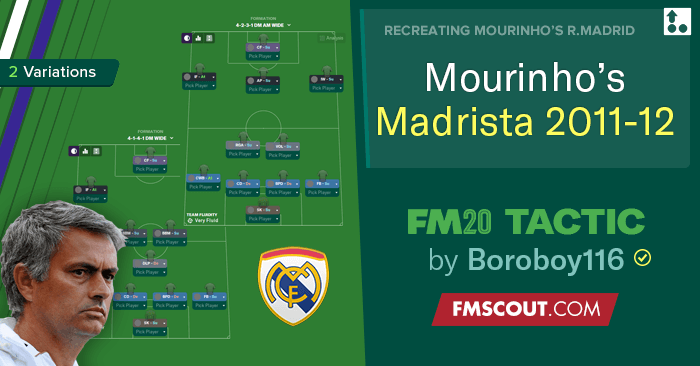 In 2010 the stock of Jose Mourinho was at its highest, fresh off winning the treble with Inter Milan, he had achieved the impossible of beating what many believe to be the best club side assembled in the modern era Peps Barcelona and with ten men for much of the 2nd leg of the semi-final. No doubt this made Real Madrid take notice and subsequently hired Jose to do one thing break Barcelona's dominance.

Looking at the managerial career of Jose Mourinho, there is often one period that is overlooked and undervalued by many and that is his spell in charge of Real Madrid. This is in part down to the fact Madrid only won one La Liga title under Jose, however, it cannot be forgotten that he overcame Guardiola's Barcelona, and contrary to what people think he did it playing attacking football.

Real were also able to win the Copa del Rey in 2011 beating Barcelona in the final. Over his three-year span at the club, Mourinho achieved a 71.9% win percentage, the highest of his career to date. However, like many of his roles at other clubs, his final year saw a drop-off which ultimately paved the way for his return to Chelsea.

Mourinho has earned a reputation for being a tactical genius, and indeed, he showed this during his time with Los Blancos, but for the most part, Mourinho used the same formation. He used a 4-2-3-1 formation in all but 4 games during the season, those games Real used a 4-3-3 instead to be more defensive The times Mourinho varied his Madrid line-up to make it more defensive, it failed. The 2011 Copa del Rey final excluded.

Mourinho has a preferred starting 11 and doesn't like to chop and change too much. At Chelsea, Inter and at Madrid, you normally knew the exact players he would pick. He also, contrary to received wisdom, prefers offensive line-ups to defensive ones. This is shown by his Chelsea, Inter and Madrid sides all being the highest-scoring teams in their respective leagues.

The 4-2-3-1 is the perfect Mourinho formation for a number of reasons. First and foremost, it is arguably the best counter-attacking formation. The 4-2-3-1 gave Madrid's four attackers a great deal of freedom, whilst also providing defensive cover with two holding midfielders shielding the defence helping to plug gaps and stop counter-attacks down the left. 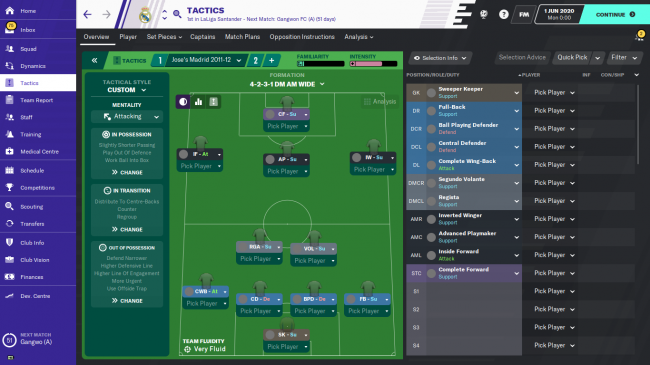 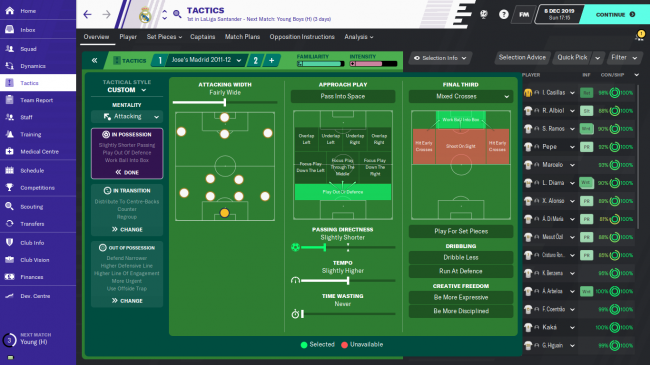 Over the season Real Madrid had an average possession of 57%. They would often play the ball short from the keeper into the centre backs, Ramos was capable of dribbling out from the back if there was limited passing options into the midfield, Pepe would often play more simple passes either into Alonso or to Ramos. However, when teams pressed them high they would be more than happy to go more direct aiming for the striker or Ronaldo who would flick the header on, Ozil would drop behind and wait for any loose balls whilst Di Maria would push high on the right to support the attack.

Madrid's fullbacks could not have been more different Arbeloa on the right would hold his position just in front of the centrebacks, whilst Marcelo would bomb forward into the space vacated by Ronaldo moving inside. Alonso was the creative hub of the team he would come deep between the centrebacks to help break the opponent's press before propelling the team forward with his excellent range of passing. Khedira was the box to box midfielder and he would push high to support the attacks whilst getting back to protect the defence. 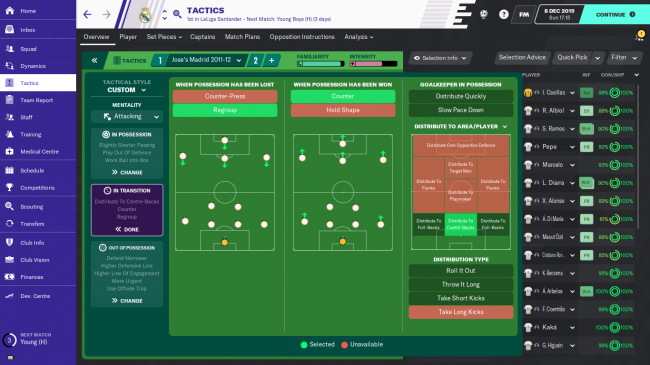 Real were lethal on the counter-attack, rather than counter-press like Barcelona they would drop back and retain their defensive shape. Once they won the ball back Alonso and Ramos were more than capable of playing direct diagonal balls to release Ronaldo who didn't contribute much when defending. Ronaldo and Benzema would create space for Ozil by running in behind the defence dragging them back, this allowed Ozil time on the ball to pick passes to one of the front three. 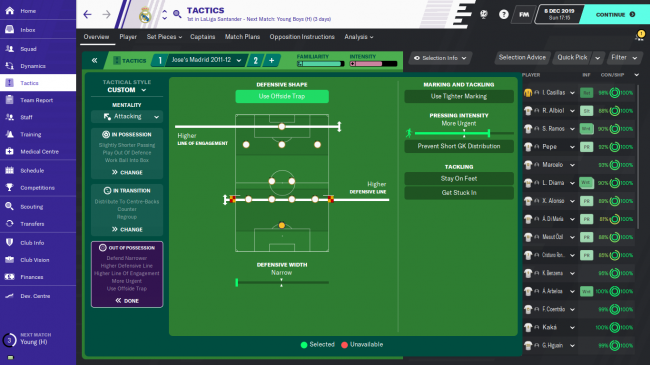 In defence, Madrid looked to regroup back into their shape, with the primary aim of protecting the centre of the pitch and this was achieved through clogging the middle using a lopsided 4-3-1-2. With the space limited in the centre teams would be forced out wide and Real had two solid centrebacks who were comfortable in dealing with crosses into the box. Alonso and Khedira were not typical defensive midfielders however they were able to break up the play effectively. Once into their defensive shape Madrid would press with intent harassing and harrying their opponents.

The results were great, although it was difficult to fully match the extraordinary goal tally. However, I did manage to score 112 goals and the defence performed far better than the actual team. A draw on the final game of the season prevented me from matching the 100 point total achieved by Mourinho. 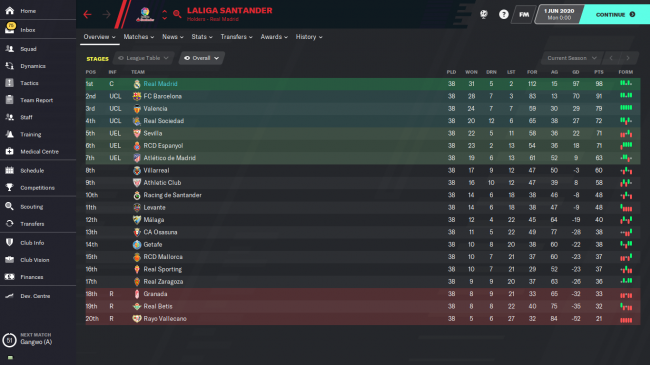 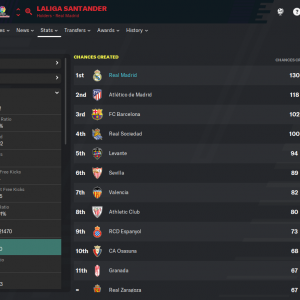 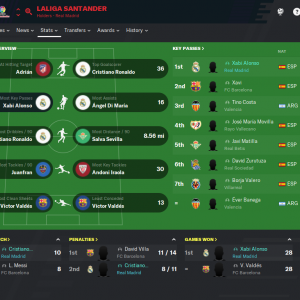 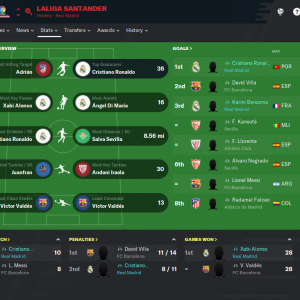 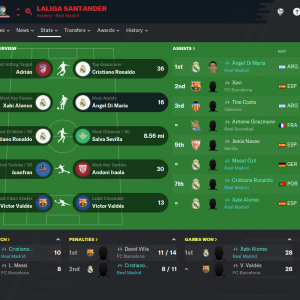 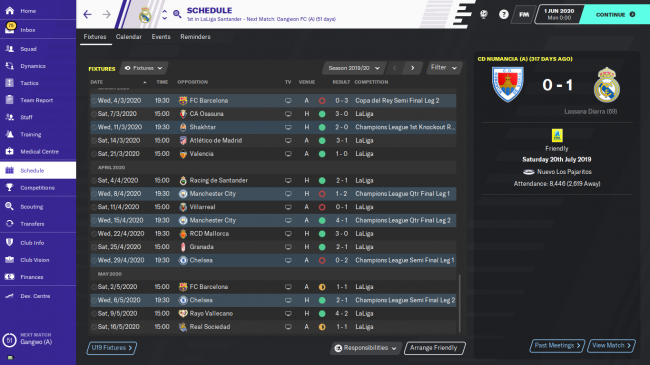 30 comments have been posted so far.