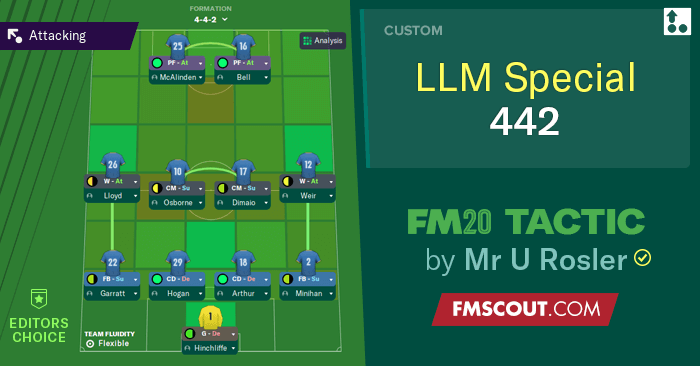 With the final ME update out, I’ve restarted my main Stockport save. It’s time for a Lower League Special detailing what I’m running with to get me up the leagues.

Whilst holiday testing is ok, nothing beats playing a full season and having just done that with Stockport here are my results. Very happy with that, Barnet ran us very close and it went to the last game of the season, but a good points total for a team predicted 20th in the league. Broke the goalscoring record for the division and picked up the FA Trophy as well.

Back to back promotions 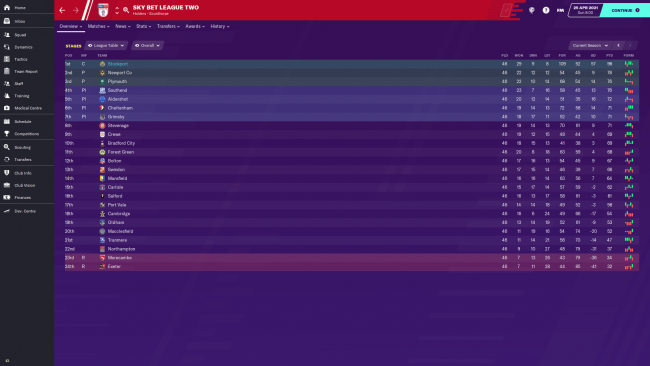 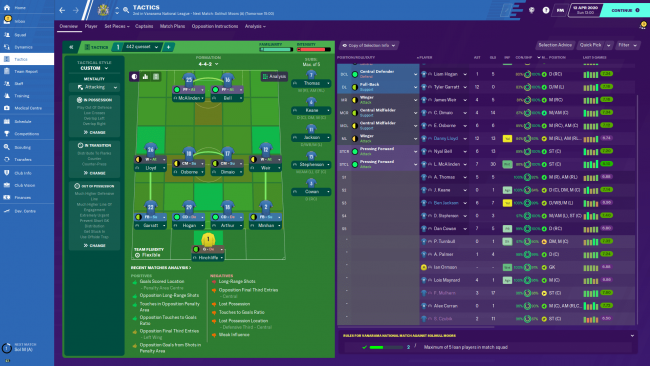 The idea was to produce a straight forward 442 with minimal team and player instructions, keeping a simple system which is easy to implement and recruit to its strengths you can plug & play Home & Away.

The strengths of the 442 are the wingplay which we gently encourage by looking for overlaps and the fact that we can run with 2 strikers.

The weakness tends to be a lack of numbers in central midfield, more specifically I like to use 2 support duties here which can cause problems defensively, we mitigate this by the conservative behavior of the Full Backs we are instructed to sit narrow and cover.

The downfall of most 442 system is the insistence on having overlapping Wingbacks on attack duty, whilst it’s the easy option for creating attacking play you are brutally exposed defensively.

Here, our Full Backs tuck in, recycle possession and cover, only venturing forward when it is deemed very safe to do so. Apart from the advantages of this behavior tactically, we can now recruit a different type of Full Back and don’t need to worry about them having to run a half marathon during a game and therefore being unable to play twice a week.

So essentially, whilst we’re banging in crosses for our Strikers the central midfielders remain fairly influential and are able to construct some decent central play as well.

We have the obligatory high press which is still well rewarded in the ME.

The Attacking Mentality sees a nice blend of Counter Attacking and incise Attacks during phases of sustained possession without prolonged passages of passive play.


Once I have a tactical set up I trust, I like to focus on building a team to absolutely fits that system of play. The Full Back behavior in this set up are a good example, we don’t need the quick, agile, dribblers with great stamina and crossing of a Wingback System, here converted Centre Backs are fine, even ideal.

We can build a really solid platform here, no reason why all of the back 4 should not be good in the air and quick. You can even go for a Tony Pulis style ‘4 Centre Backs’ approach. As well as being ideal for open play, having 4 strong headers in the team straight from the off is great for both attacking and defensive set pieces. As you move up the league’s you can get more greedy and seek more complete footballers.

Working on the principle that ‘a good biggun beats a good littlun’ our central midfielders are required to blend both the Physical & the Technical. We are looking for committed, hard working players with an eye for a pass. They are up against it with only the 2 of them holding the central area of the pitch.

These are the only roles where there is no requirement for physicality, if they have that as well, great, but we are looking for highly mobile ball carriers with a trick or two up their sleeve. They tend to come in small packages. Beat their man, and cross from the byline is what we’re after here.

Again, the Biggun vs Littlun analogy applies. Despite our request for low crosses, many will come in at head height and it would be a shame not to put them away. As we employ a crossing system we need our strikers strong enough to battle Centre Backs and as pressing forwards, close down opponents and win possession. But ultimately, these are goal scorers and when presented with chances we need them to put their fair share away.

So, working to this system we have at least 8 Physical Outfield Players giving us a presence in open play and a good chance to outcompete our opponents at set-pieces. The higher up the leagues you go the more technical attributes you can layer on via good recruitment ensuring your standards for strong physical players don’t drop.

This year I am employing the same tried and trusted training schedules from last year namely;

PRE-SEASON should be employed immediately upon the players return for a new season until the week before your first competitive match. It is designed to recover physical attributes lost during the off season, build team morale, and improving conditioning and injury resistance for the main season.

MATCH WEEK should be employed in any week where you have 2 OR MORE games. Pursuing player attribute development is pointless during these weeks, instead its all about recovery, conditioning and arriving on Match days in the best physical and mental shape possible.

DEVELOPMENT WEEK can be employed if you only have 1 match this week leaving a run of training days to work on coaching and improving players whilst still gearing up for match day.