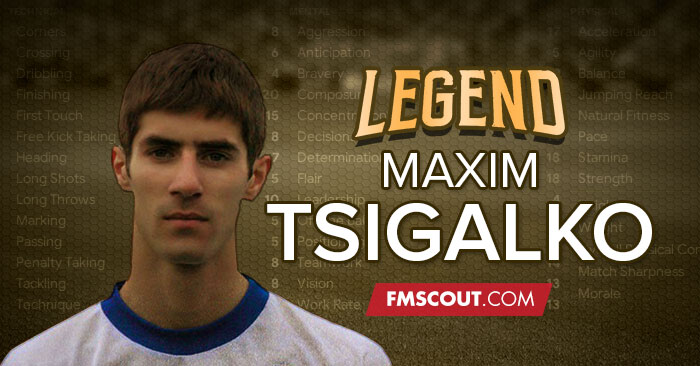 A message from FM Scout:

As most FM players have heard by now, Belarusian former footballer Maksim Tsyhalka – who earned legendary status with fans of the popular Championship Manager 01/02 under the name Maxim Tsigalko – has died at the age of 37.
As the old players of CM and FM will remember Tsigalko earned iconic status among legions of football fans for his remarkable performances on the 2001/02 edition of the Championship Manager, where he was hailed as the game’s ‘greatest ever player’ for his incredible value for money for players who opted for him as a bargain buy.

Tsigalko himself was unaware of his star status, and only discovered it when a Russian journalist told him about it years later, byt that time he had retired following a serious injury at the age of 26, and worked a construction builder making just 5$ a day.

We at FM Scout thought we should honor this FM Legend, so we asked pr0 if he would make a DB with Maxim as the young 19 year old he was at the time.
His stats have been transferred into FM 21, and you can buy him from his original team Dinamo Minsk for pennies, and watch him set the world alight once more.

RIP Maxim Tsigalko, you will live on in our memories. How to add Maxim Tsigalko in your FM21 save

Move the downloaded .fmf file to your "editor data" folder, located by default at:

If the folder doesn't exist, create it.

Start a new career game with this database enabled.