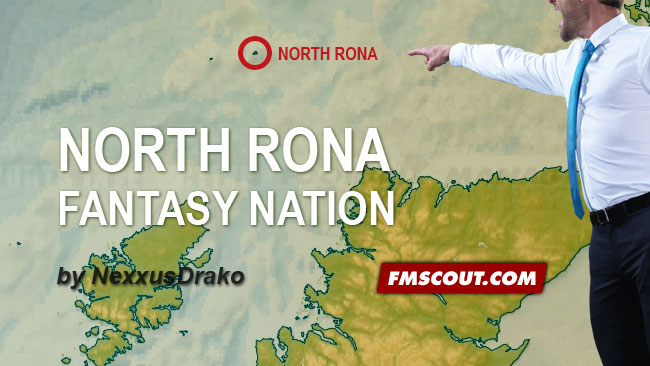 This is a database that adds the uninhabited island of North Rona as a playable league.

Backstory: North Rona was a small uninhabited island until some people took a boat and moved there in 1980. After being there for 10 years and growing to encompass 2,500 people. they began to fight for independence, and in 2000, succeeded. It took the EU 12 years to recognize them, as well as FIFA and UEFA on the same day in 2012. The football league only started in 2012, and the six teams in the premier league were founded in 2000, and turned pro for the 2012 season. Football, tourism and fishing are North Rona's main industies, and not charging much income tax hs caused it to become a tax haven.

Start a new career game (won't work with classic mode).
A little pop-up window will come up that says there is 1 enabled editor file (number changes depending on how many other custom leagues you have installed). Click OK.

After this click on North Rona, then Next Game overview in the corner.