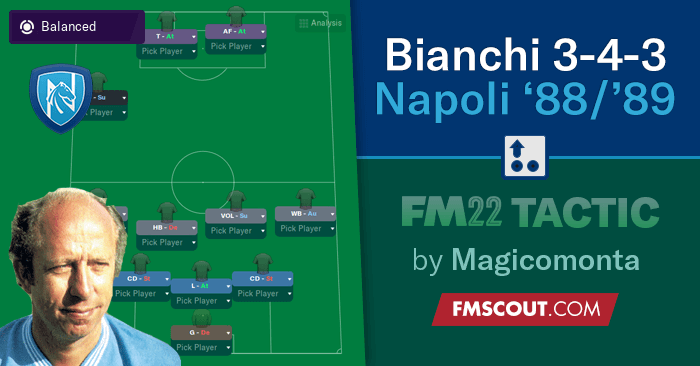 Today Magicomonta presents the new tactical emulation for the pleasure of Neapolitan friends. It is the Napoli of Ottavio Bianchi, UEFA cup champions of 1989.

I state that in that year I was 3 years old so I was based on video of the season that are not many and some tactical analyzes made by others to create the tactic so I already apologize if something is wrong, but I think and I hope I did a good one Work. 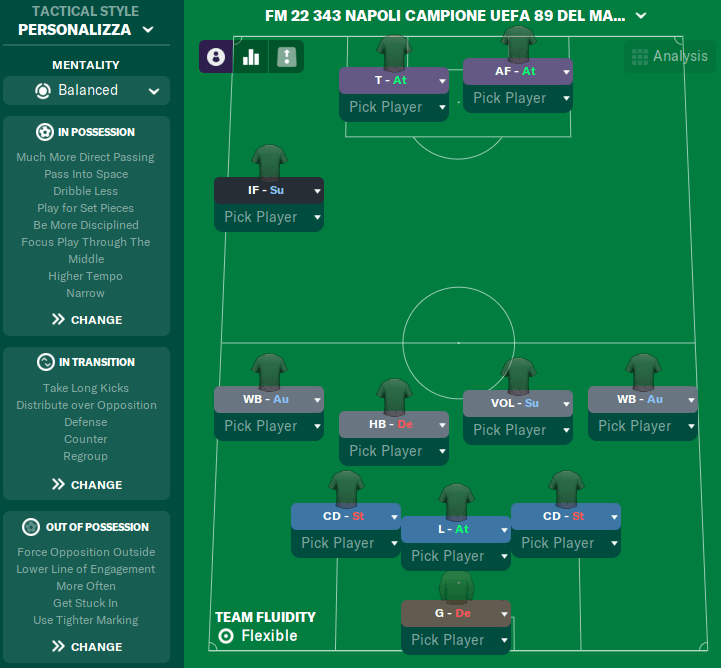 Let's start with a small analysis:

The team lined up with a basic with a 343 where in the possession phase it became a 3313 while in the defensive phase it became a 532. The game principles were quite basic but well organized, it was aimed at recovering the ball in its own half with the help of 9/11th of the players while the Maradona and Careca waiting precisely to be quickly served with long launches by the companions to point the opposing defense finding it discovered.

In the possession phase to accompany the action of the 2 attackers there was the high left -wing exterior, the second median (role of Football Manager 22) and in turn one of the two full -backs, sometimes it was also the free to have a license to accompany the Action and attack thanks to the role of Volanobrasian of Alemao who went to cover it, role this very important also in the defensive phase because it served as a median and also as a defender added.

Fondoral also the role of Fusi, the second median, man to everything field that was good at recovering the balls and equally to follow the action in the offensive phase by inserting or coming into the trailer of the tips. The two defenders were real markers.

In the video you will find the explanation of the tactic in FM22 and the results of the season played using a database of the 92/93 season well done by the great Madscientist therefore with roses of the opponents other than that year (in my opinion superior because we talk about the Great Milan, which was already there before, the Juventus of Roberto Baggio, the Sampdoria of Mancini & Co. etc. etc etc. not to speak in Europe that that year participated in the Champions League) and our rose almost equal to '89 but with more years and a Maradona at the end of his career, that year in Sevilla, who was always Maradona anyway.

I only anticipate some results:
4 in Serie A (in 1992 came 11th, in 89 second)
quarters of Coppa Italia (in 92 quarters in 89 finalist)
Champions of the Montiale per club
Champions League

Find out the rest in the video

I wait for you in the Telegram group with other fans
https://t.me/pressionofootballmanger

A hug from your magicomonta