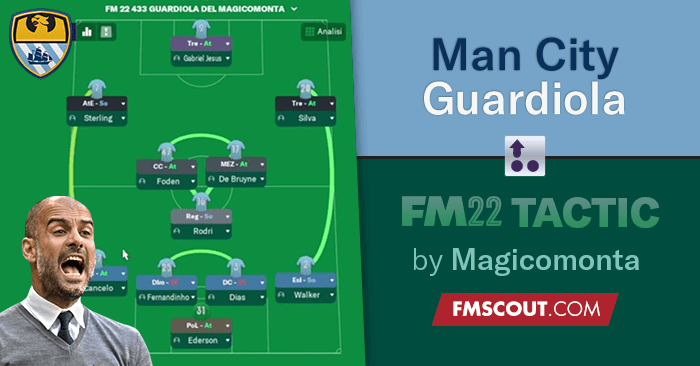 The Manchester City team prefers quick and close phrasing with KDB the most unpredictable player on the pitch, not because the others are less or less strong but because of all the various changes of position of their players on the pitch he is the most mobile.

The one who always remains in defense, but still high in the opponent's midfield is one of the two defenders while the other, often this happens when he plays Fernandinho, goes to position himself in Meidana together with the director Rodri and the right-back Walker often or Cancelo when he plays on the right, so here are the 3 midfielders formed, who often remain 2 as Rodri often accompanies the action.

But it is in front that the city gives its best with the continuous changes of position between the outside midfielders and the striker, the only one who always remains wide but very high is left-back Cancelo or Zinchenko.

de Bruyne as mentioned is all-round, often widens a lot to exchange positions with Bernardo Silva or Maherz (depends on who plays) who comes to play inside the field, only to then the Belgian midfielder himself throwing himself back into the insertions.

The other midfielder is Foden, an insertion midfielder who often goes to replace the attacker in the penalty area who always comes to take away the defense to allow the insertions of his teammates like the two outside the two midfielders and in turn he himself throwing himself back from behind is therefore the 5/6 (when Rodri also follows the action) in front.

Tactical explanation in the video:


Let's see now how the season went, played as always in holiday season without transfers, without training, without changing men unless injured or disqualified and without ever changing tactics either before or during the match.

1st in Premier League with 91 points, 93 goals scored and 32 conceded
Carabao cup winner
Eliminated in the 4th round of FA cup by Tottenham
Champions League find out in the video