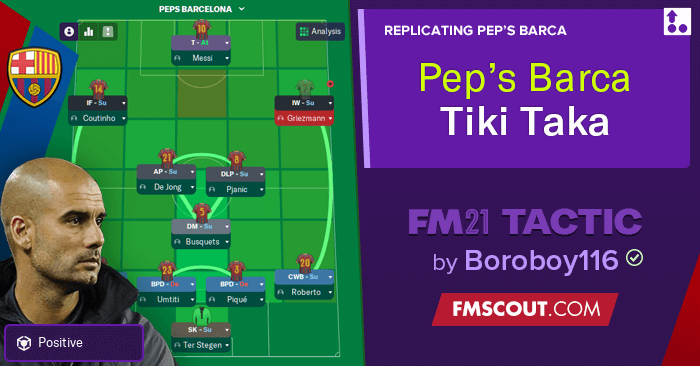 
The style of football that Barcelona played under Pep between 2008 and 2012 was known as ‘Tiki-Taka’, defined as a style of play revolving around highly accurate short passes with emphasis on retaining possession of the ball. However, Guardiola stresses the point that possession is the tool that allows them to create lots of chances, rather than being the goal itself.

“If you do nothing with the ball then what’s the point?! Everyone in the world knows when you’re playing with meaning or when you’re just playing because you like having the ball. If your possession doesn’t have motion, it’s like living without a life; it’s more dangerous to play like that. I may as well just sit down with my legs crossed on the bench, waiting for the opposition to counter-attack.” states Guardiola.

Pep Guardiola will no doubt be remembered as one of the greatest football managers of all time. A disciple of Johan Cruyff, Pep is a major reference point for aspirational coaches around the world, with many inspired by his ‘Juego de Posicion’ philosophy.

Every masterpiece needs a canvas, and Guardiola’s was Positional Play – a football philosophy grasped by the Catalan during his football travels around the world. The team that understood positional play in the most incredible way was Guardiola's Barcelona, says Marti Perarnau,

To ensure positional superiority is achieved, players are positioned in defined spaces according to four reference points: the ball, their teammates, the space, and the opponents. Following these points allows the team to be keyed up with the events of the match being in control. With the added benefit of providing a safety net protecting against potential counter-attacks.

“The faster the ball goes the field, the faster it will come back at us,” says Guardiola when journalists questioned his style during a press conference. The team must always aim to provide support for the ball-carrier and avoid isolating a player if he is not in a favourable position to exploit such isolation. The team must play from the back including the keeper, progressing up the pitch using numerical overloads. A direct long ball from defence to attack is not favourable as this will isolate the team’s centre forward against the opponents defence leaving them isolated.

In 2010-11 Barcelona reached their peak the positional play Pep craved had been perfected, they had changed peoples perceptions on how the game should be played. Combining beautiful football with both domestic and European titles with many dubbing them the greatest club side of the modern era. Pep used a base formation which was the 4-3-3 but Barcelona were fluid and would often transition into other formations like the 3-4-3 perfected by Guardiols's mentor Johan Cruyff. 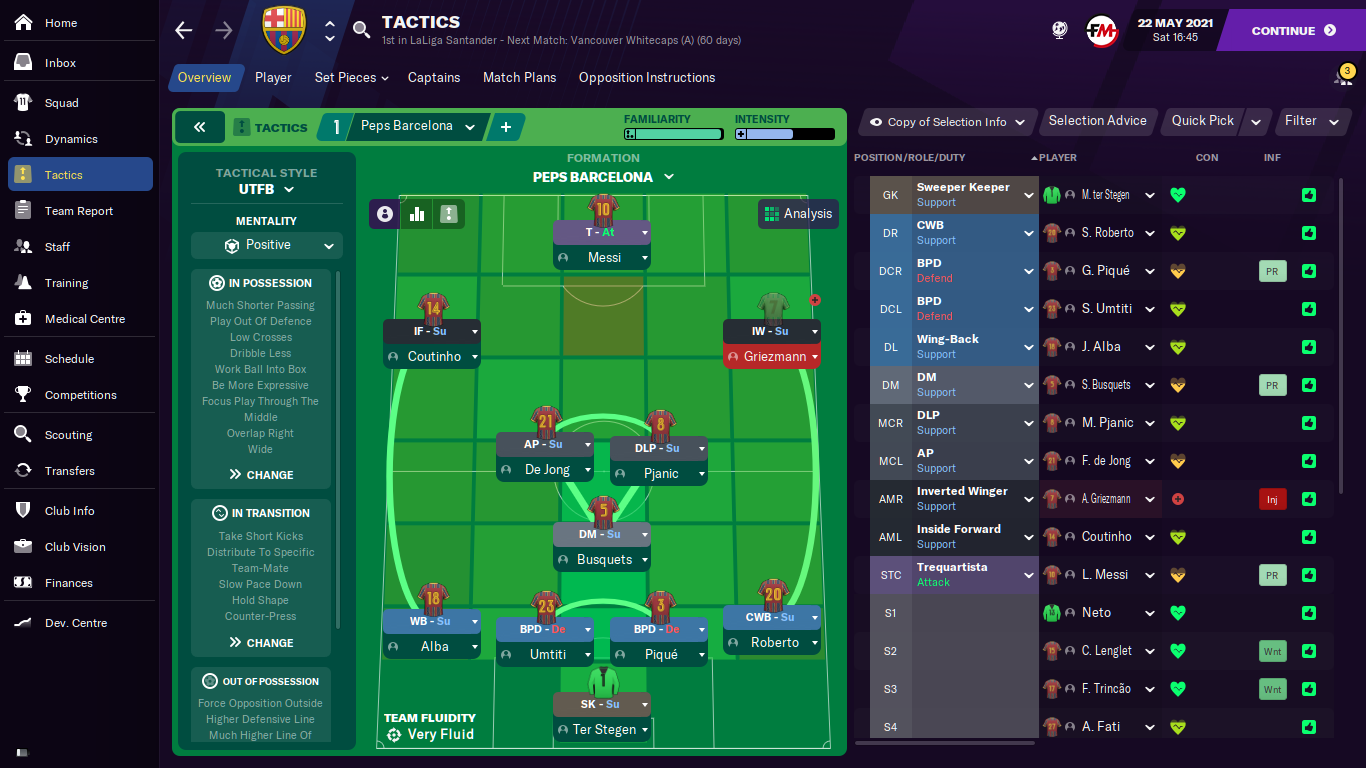 Barcelona’s heartbeat was the midfield, they had an awe-inspiring trio in Busquets-Xavi-Iniesta. Add Messi to this trio, who drops into midfield, you get the diamond that dominated European football with their elegant passing and brilliant positioning. Barcelona's main aim was to overload the centre to free their wingers by getting them 1v1 against the isolated full-backs. They used passing triangles, diamonds and a rhombus to circulate the ball all across the pitch stretching the opponent's lines by creating different angles through the staggering of positions. 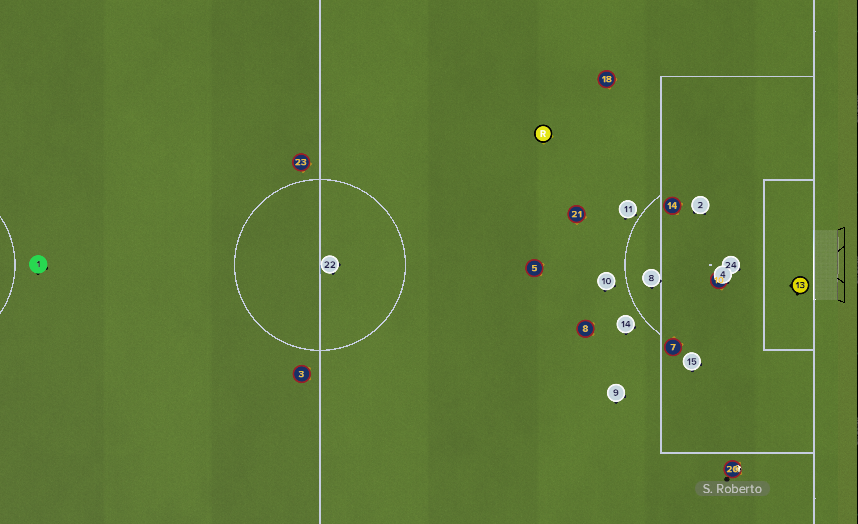 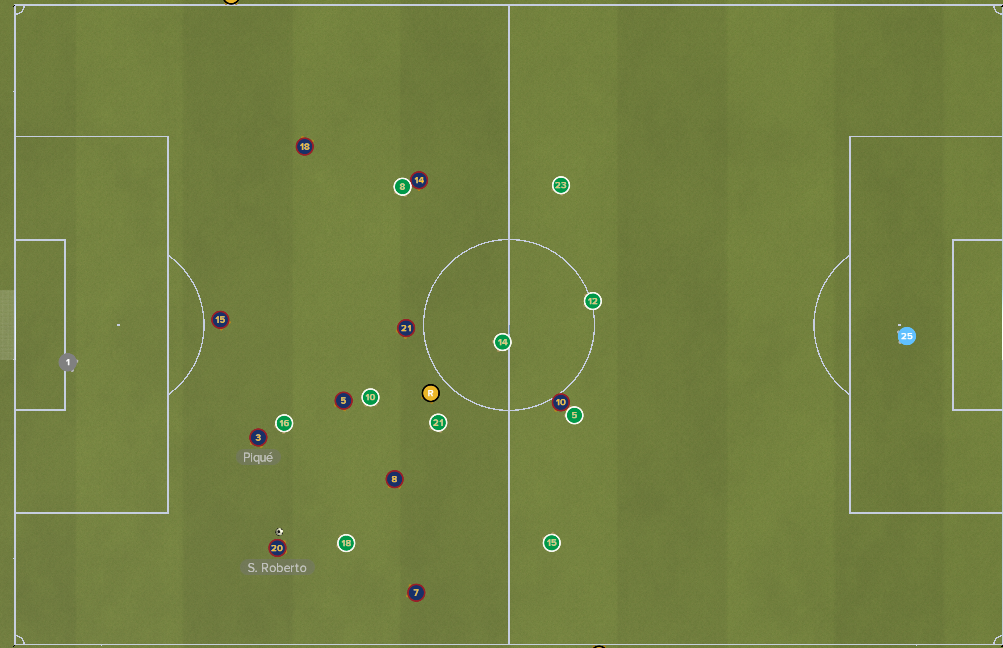 The images above show the full effect of these principles creating space for teammates to receive the ball and influence the game.

Another crucial part of the jigsaw was Guardiola's decision to move Messi inside from the right-wing to his now-famous False 9 role. Again this was done to ensure numerical and positional superiority at all times. The false Nine not only benefitted the team but also brought massive success upon the Argentinian who didn’t fit the typical profile of a striker. Messi in his new role had the ability to score, create, dribble and impact the game without needing to touch therefore allowing space for his teammates, This was the dilemma faced by every team Barcelona encountered do they allow Messi to drop into space giving him time on the ball or to follow him and open gaps for Pedro and Villa to exploit.

Barcelona were very capable of defending with the ball, they possessed technical players who weren't afraid to get on the ball rotating it between each player. This required great nerve as one error could allow the opponent to counter-attack to devasting effect.

As soon as Barça’s players lost the ball, they would implement what was known as the 6-second rule swarming around the ball carrier and his potential outlets. This philosophy of Guardiola states pressure should be applied for a maximum of 6 seconds with the highest of intensity to win the ball back. However, if the press failed, the team would drop back with the wingers tracking back leaving Messi as the furthest player forward. In Pep’s mind, he despises the idea of being a “reactive” side; he always prefers his team to be “proactive” not only in attack but also in defence. 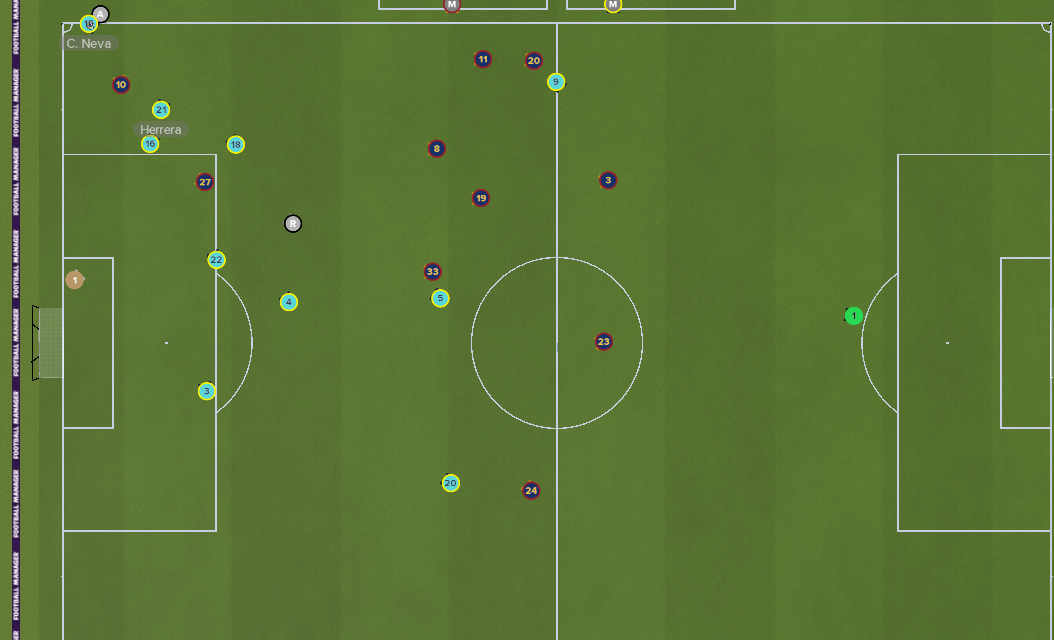 The images above show how I was able to replicate the pressing in-game, allowing quick turnovers of the ball.


The video shows the tactic in greater detail.

To replicate the football played by Peps Barcelona I have gone with a very fluid and positive style, this will help play the positional style craved by Guardiola, allowing players to roam from their starting positions to support the man on the ball. Barcelona stretched the pitch wide so I am using wide width but because they liked to overload the centre focus play through the middle is selected. 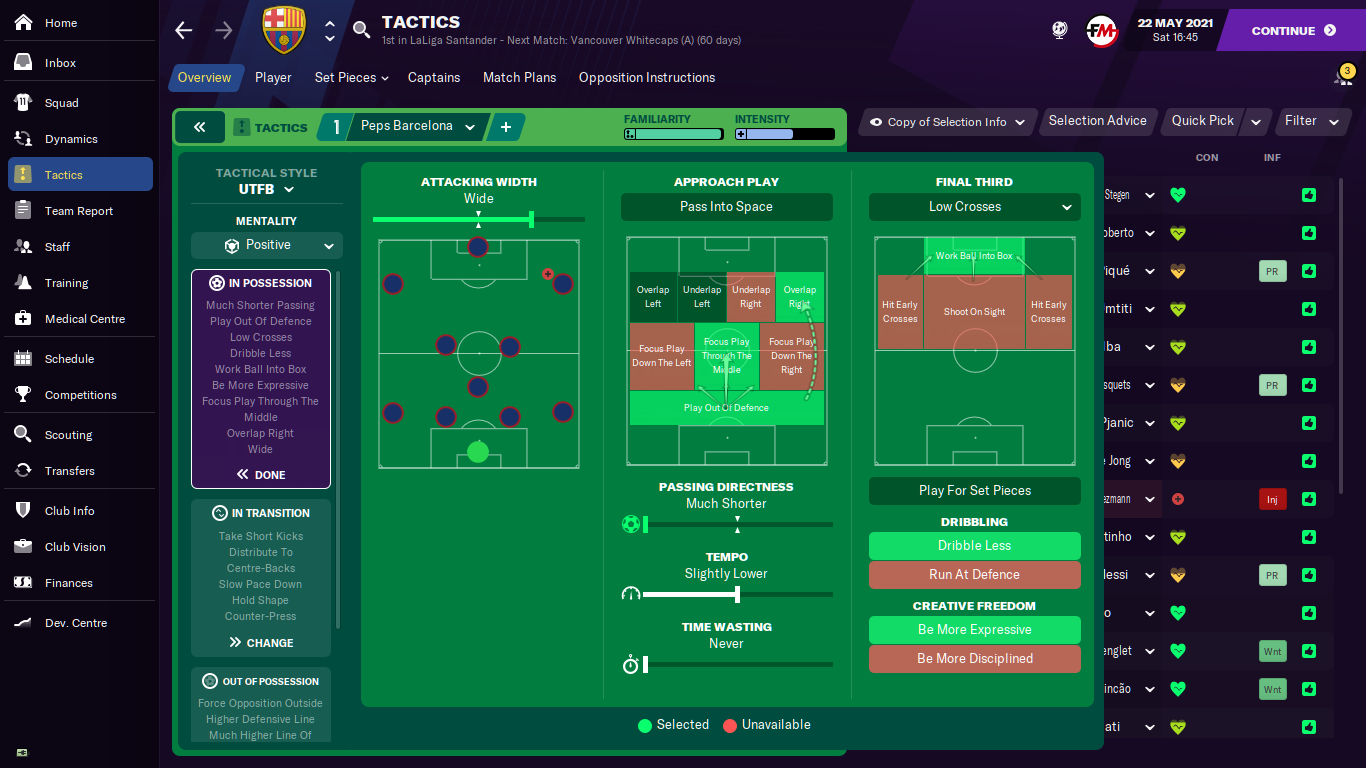 In transition, the team will counter-press as per the 6-second rule used by Barcelona to win the ball back, then once the ball is won back they will hold their positions to allow them to construct attacks again. In order to replicate the 3v2 when building out from the back, the DM is selected to receive the ball with the CB's splitting wide. 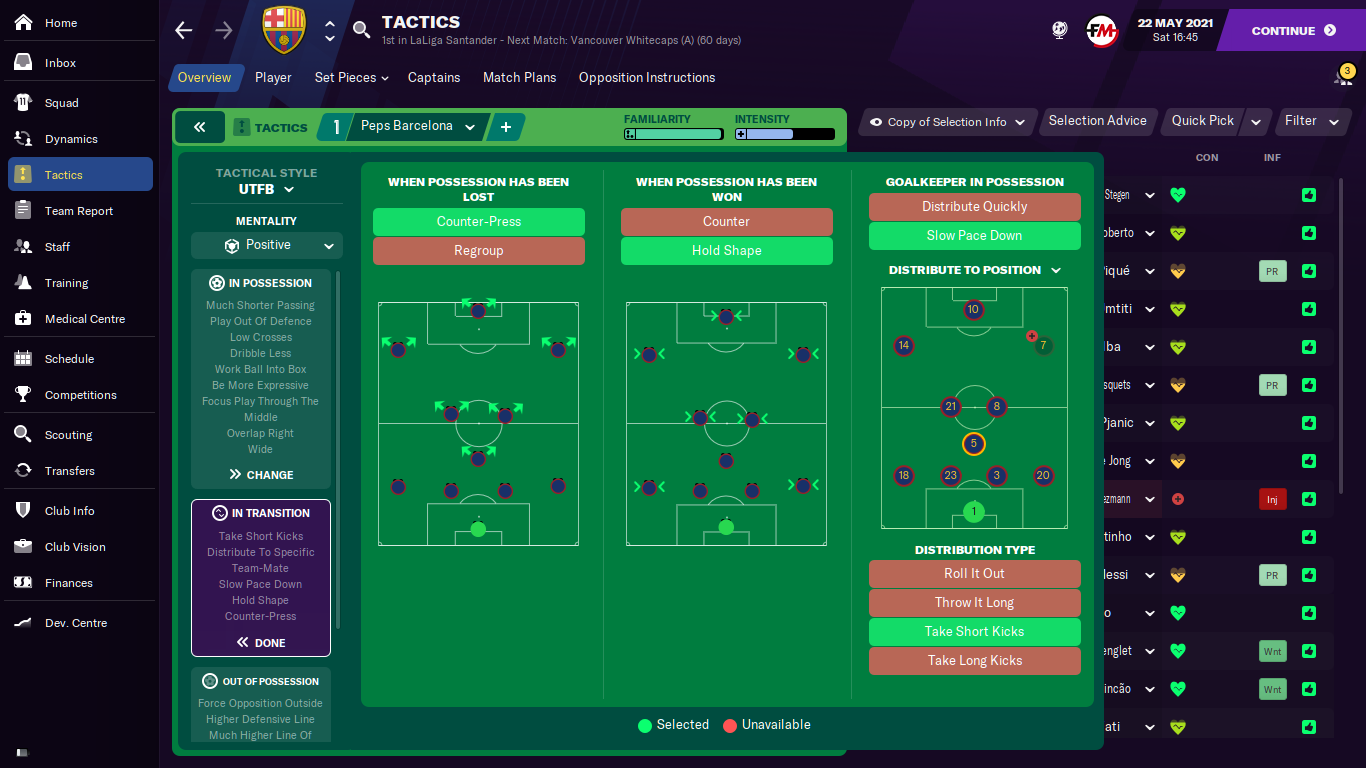 Without the ball, the team plays the high line squeezing the opponents by making the pitch smaller. A more urgent press is used in conjunction with the counter-press and high lines as per the 6-second rule and allows the team to be proactive in defence as stated in the article. Tighter marking helps to limit the passing options again helping the pressing instructions and stay on feet is used as Barcelona rarely went to ground when tackling. 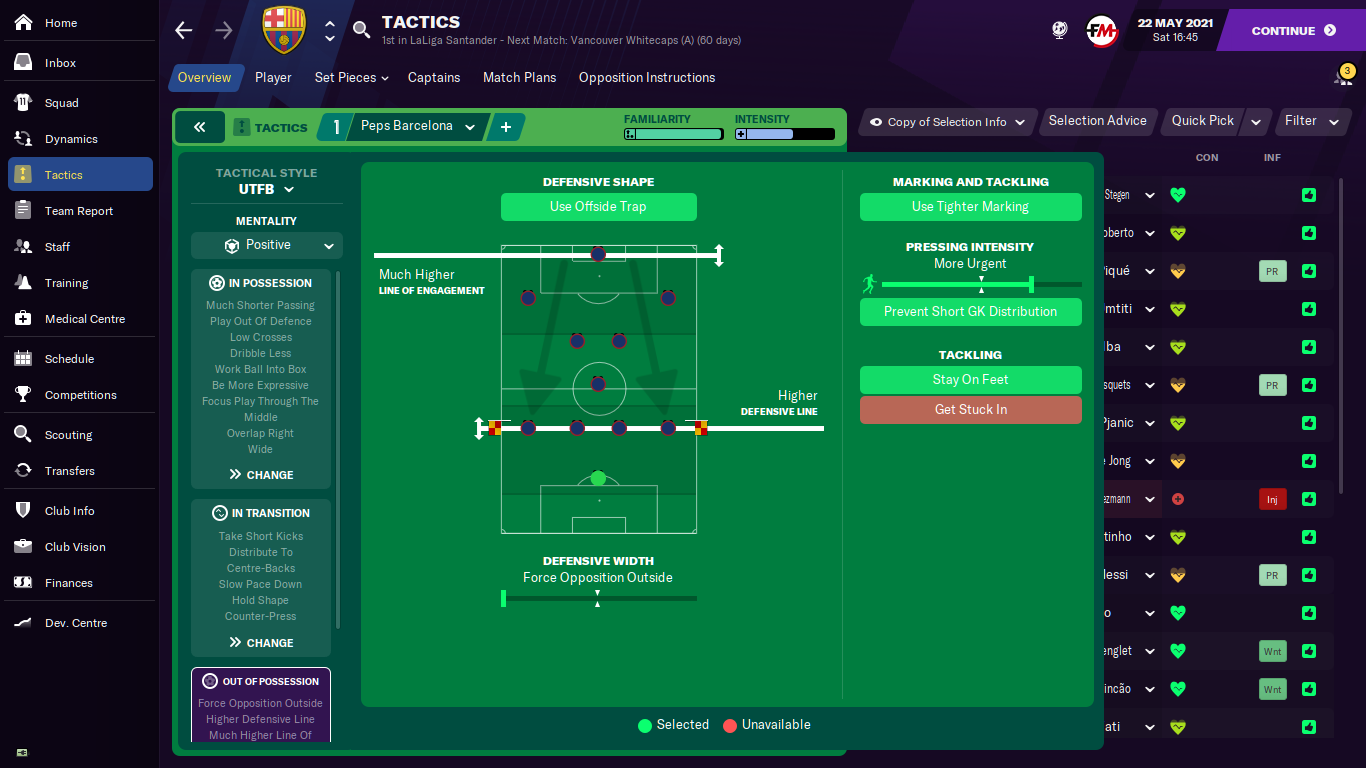 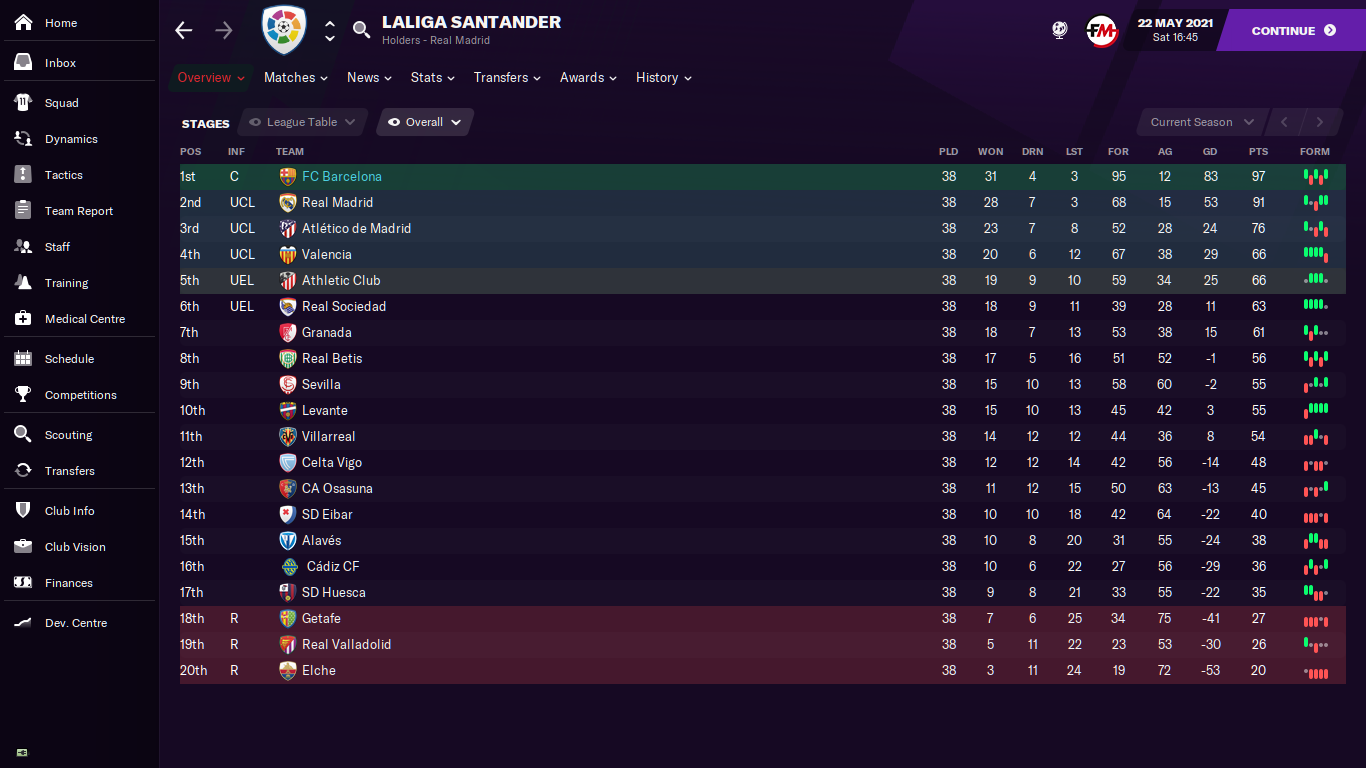 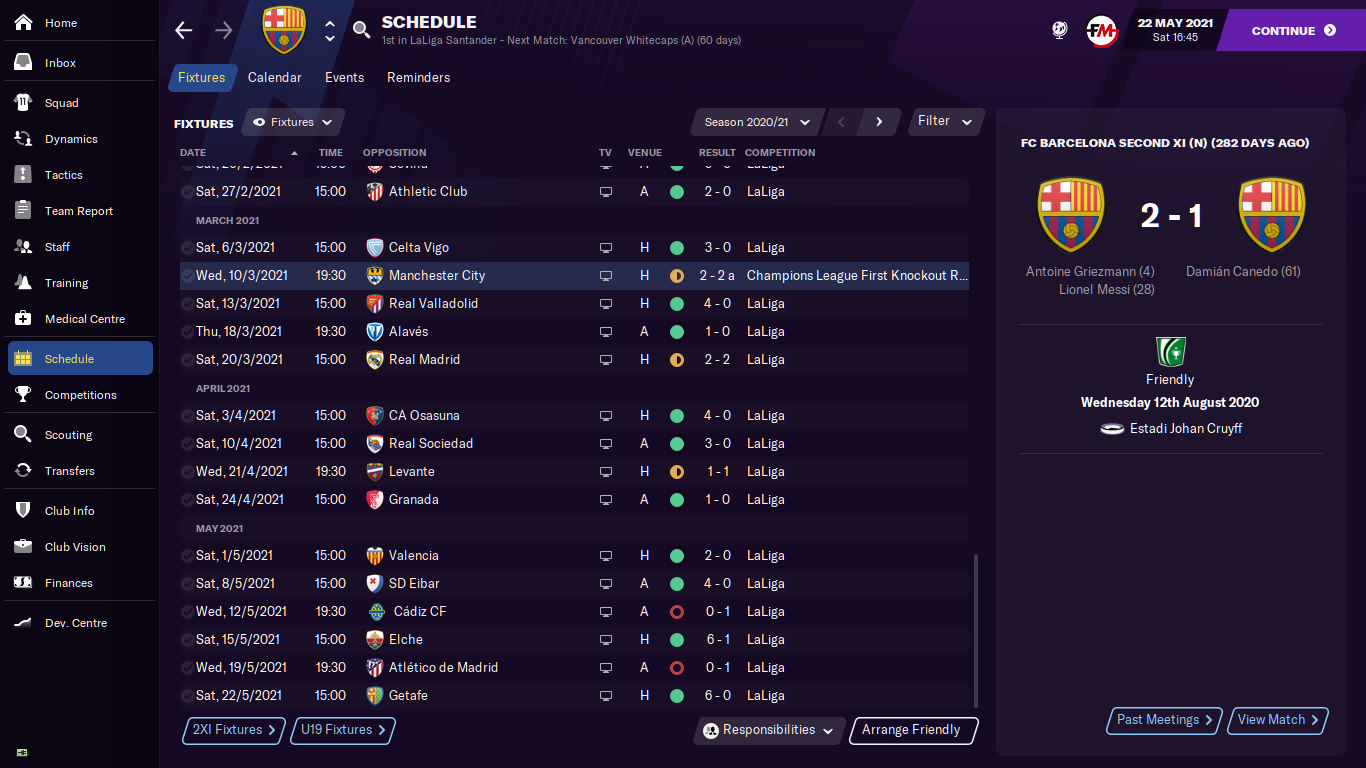 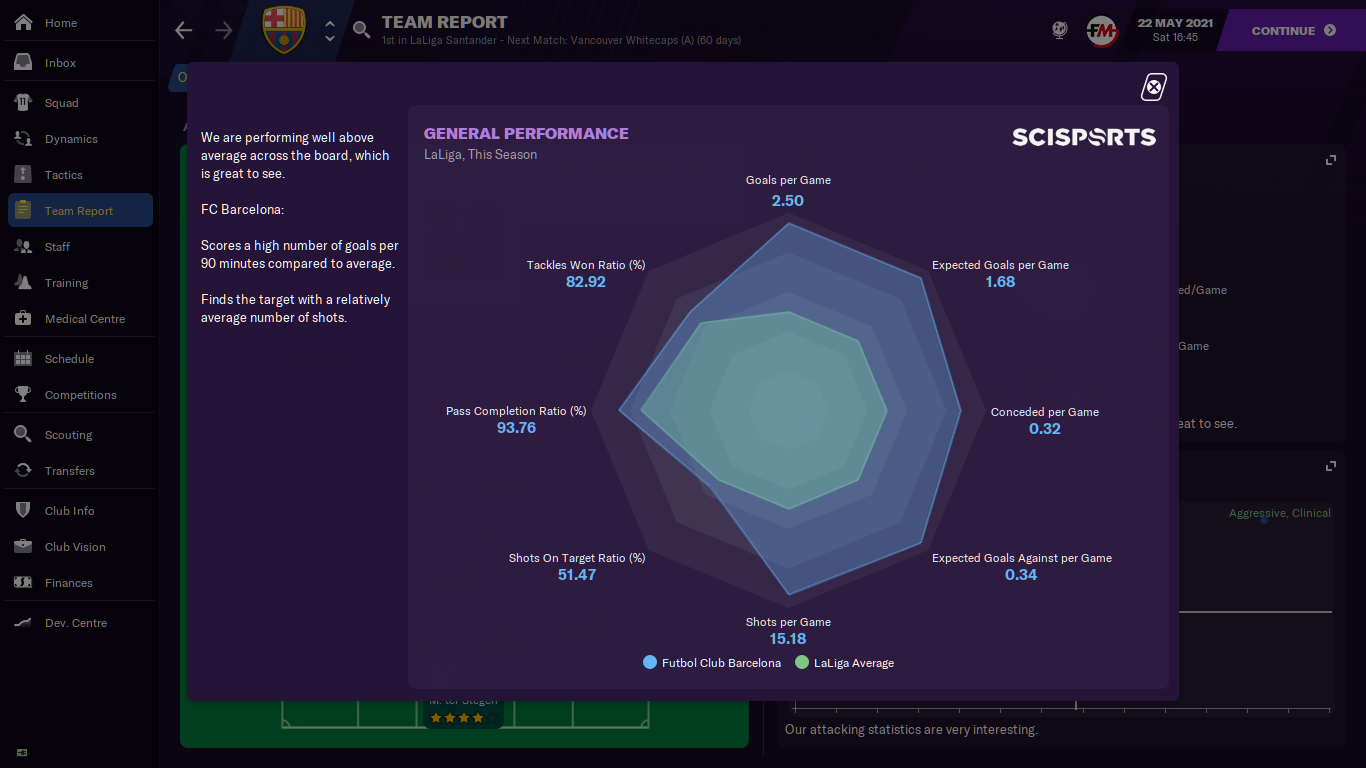 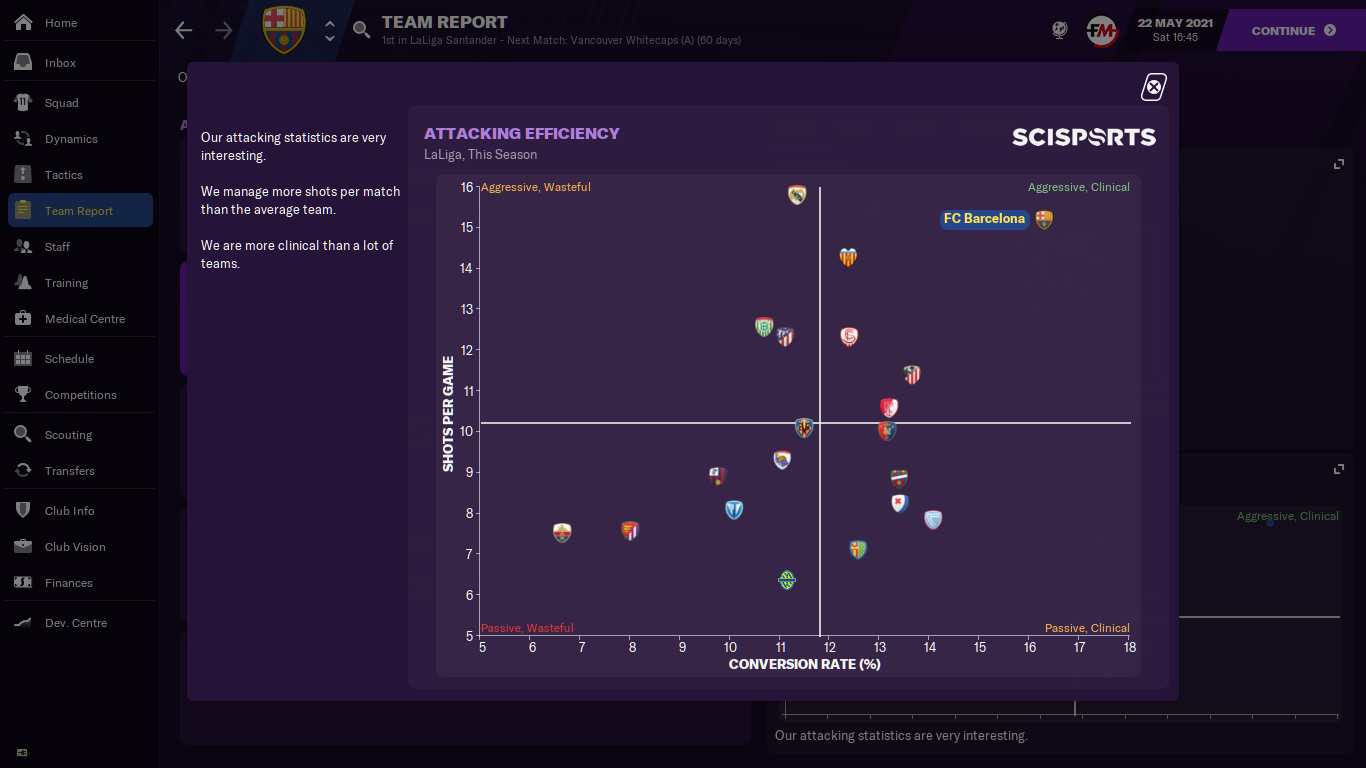 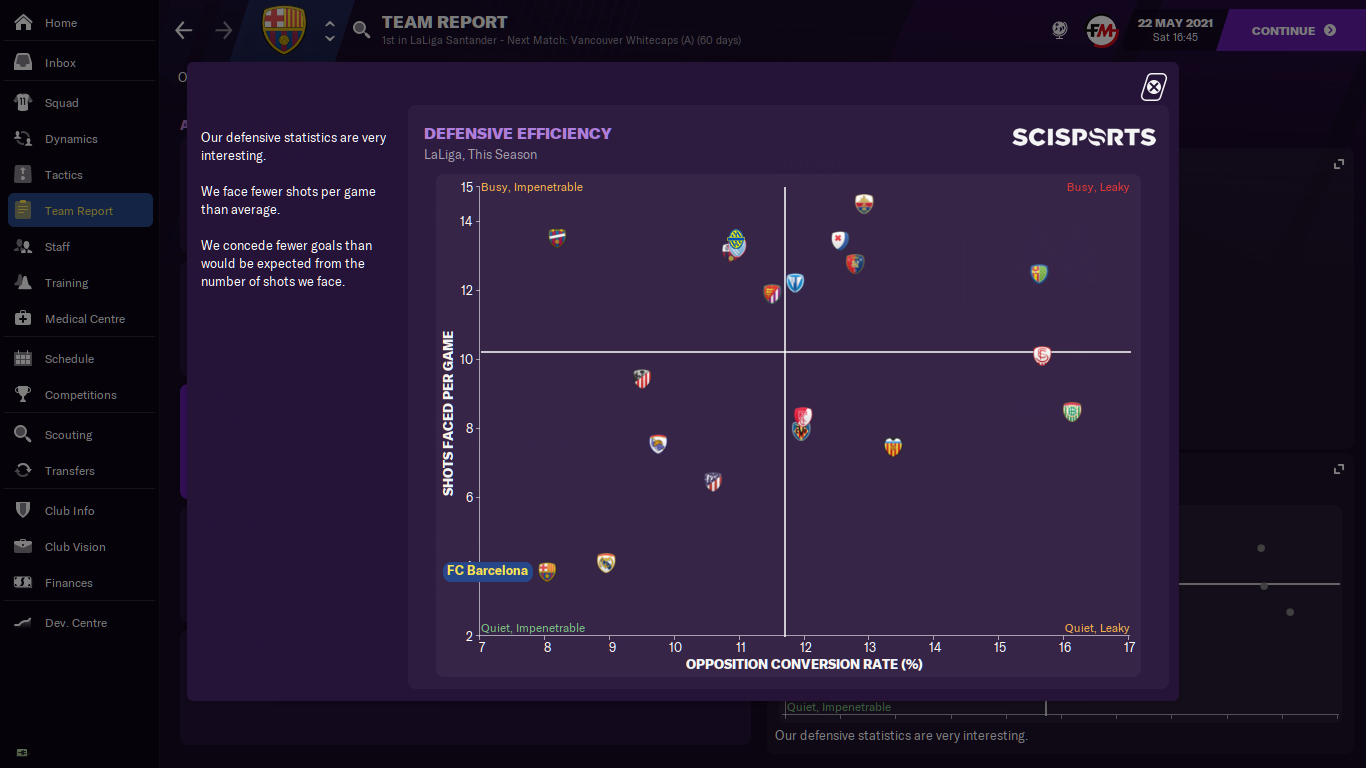