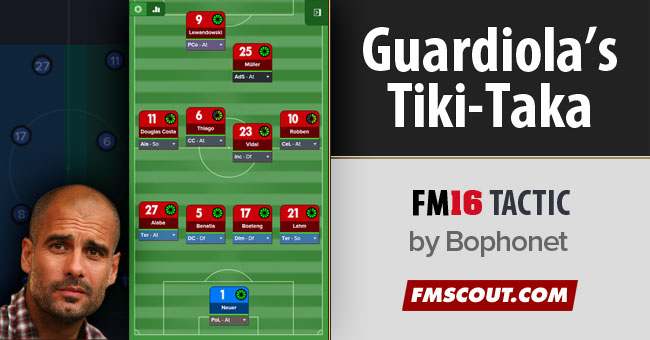 After many requests, here's my version of Pep Guardiola's tiki-taka tactic for Football Manager 2016!

In my attempt to emulate Pep Guardiola's philosophy I eventually settled on this asymmetric 4-4-2/4-4-1-1, with an aggressive AMC supporting the striker. My main purpose was to recreate Pep's all around philosophy based on players' movement rather than a particular formation or single roles.

- High defensive line
- Ball possession and short passing starting from GK
- Relatively slow build-up culminating in high tempo, one-two passes in the attacking third.
- Closing down all over the pitch.
- Movement off the ball, with players swapping positions and overlapping.
- Compact defensive shape
- Attacking with many players
- Creating numbers whenever possible

SK/attack: the Manuel Neuer role, you need a real sweeper keeper here.
FB/support and attack: left back is more attacking, both needs good crossing and passing skills as they cut inside to help possession.
DC's: one is a BPD. Quickness and anticipation are important for both centre backs, as well as decent passing to start offensive play.
WM/attack: think Arjen Robben. It's very important to use a left footed player here.
BWM/defend: think Arturo Vidal. A tireless ball winning midfielder playing a short passing game.
CM/attack: closer to an advanced playmaker in my ideas, a player like Thiago Alcantara would be perfect here.
W/support: we want to exploit the left flank and Douglas Costa will cross, run with the ball and link well with DL, MCL and the striker. You need a left footed player here.
SS/attack: the Thomas Muller role. Anticipation, finishing and movement between the lines, and lots of dirty work too.
CF/attack: a versatile, complete forward. Ideally should be a big, strong striker to take advantage of crosses and wide play. 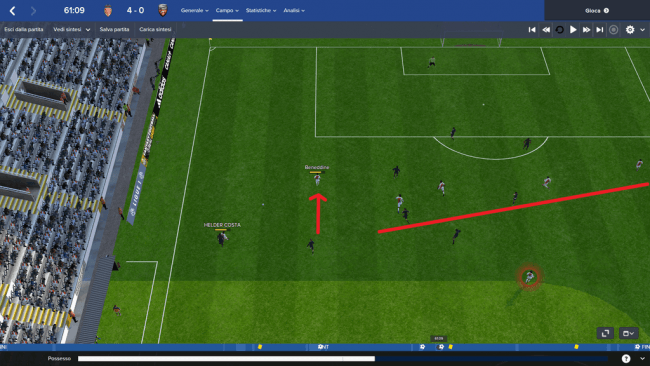 - Tested extensively with several clubs: Monaco, Byern, Swansea, Club Bruges
- You need to follow the instructions especially for wide midfielders roles (both must be left footed).
- The players will need time to learn the tactic and work as a unit, then you will really see the power of this tactic.
- This tactic is suited for big clubs, but also for any team with good overall technique. Players with better technique, creativity and passing skills will of course create more effective and spectacular offensive play. Discussion: Per Guardiola's Tiki-Taka for FM 2016