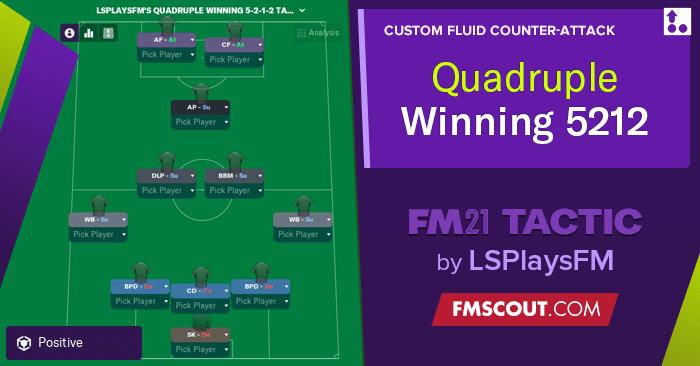 Hey guys, this is in my opinion one of the best tactics I have used in Football Manager in some years which allowed me to totally dominate in every single competition that I used it in for FM21!

The tactic was used across around 90% of my debut season as Manchester United manager on my FM21 series Taming The Devils on my YouTube channel; LSPlaysFM! 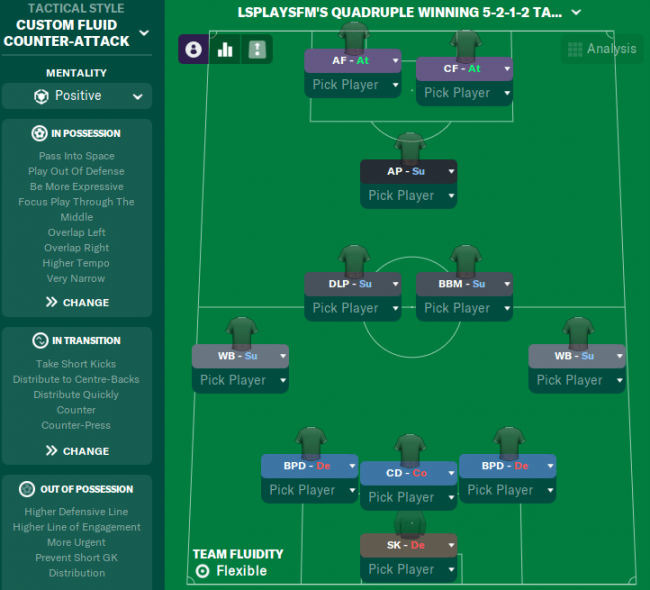 To help explain the tactic and how it works, I also created a video which runs through the tactic and just how well it did. If you would like to take a look at this then please view the video below:

The tactic itself managed to win me the Quadruple and dominated teams whether large or small. The tactic itself focuses on counter attacking play primarily and being defensively strong, however it is also incredibly powerful when attacking also as you can by the goals scored and against in the gyazo below: 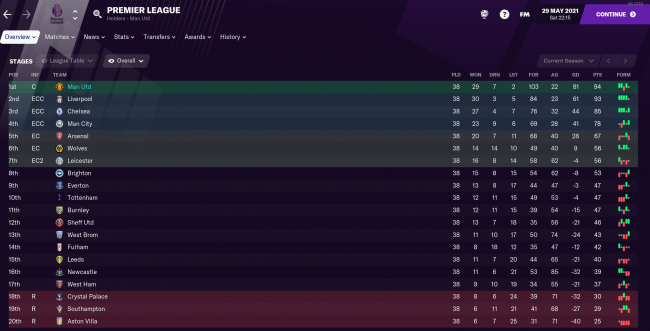 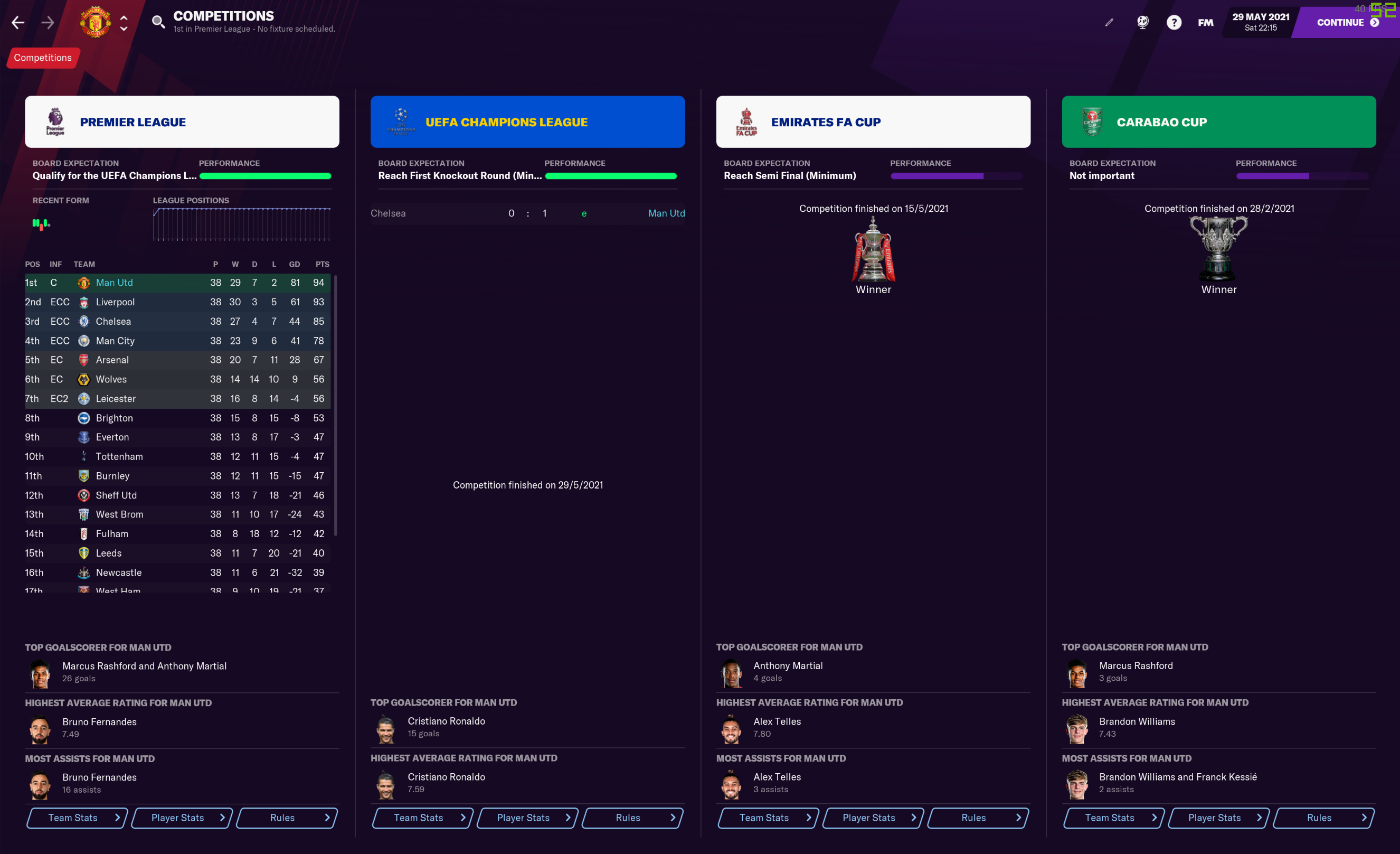 The tactic itself does require to have a pacey striker and decent wing backs, but with those in your team, I have found this tactic to be superbly powerful in FM21. I have even used a very similar variant to it in my Twitch save with Norwich City which has also seen very similar results with us qualifying for the Europa League after only 2 seasons in charge.

In terms of player and opposition instructions as I have been asked by a few users, there are no additional steps which were taken with this tactic. The player instruction were simply all the default ones for their specific roles and the opposition instructions I generally left blank, occassionally to the assistant or I'd here and there tweak them per opponent. This is one of those areas which could tbh make a big difference to your own use of the tactic, so utilising it could help push your team to the next level using this tactic!

Finally you can also see how strong the team was using the 5-2-1-2 statistically with the various analysts reports with Utd simply dominating across the board in the vast majority of areas in which they were involved in! 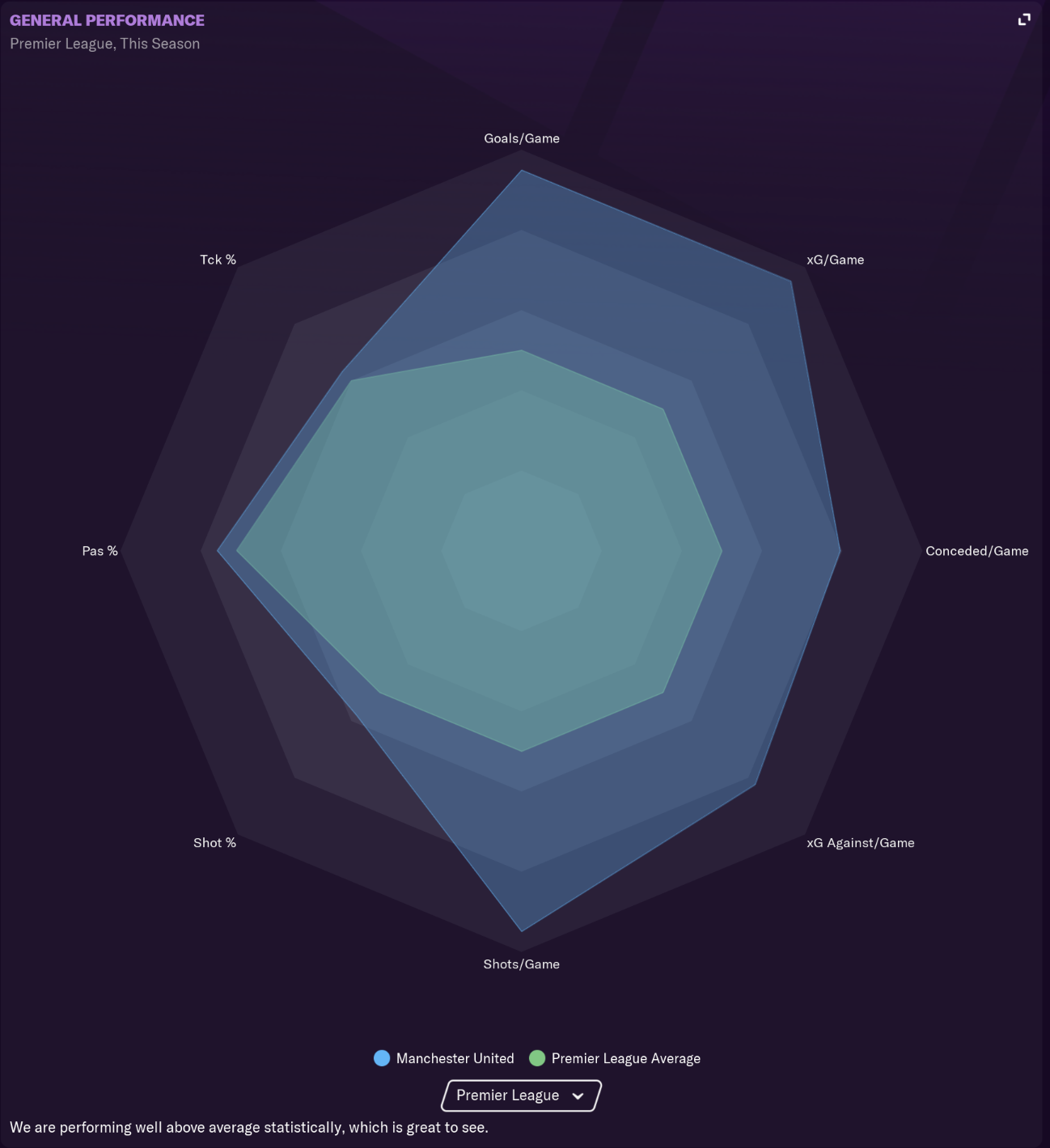 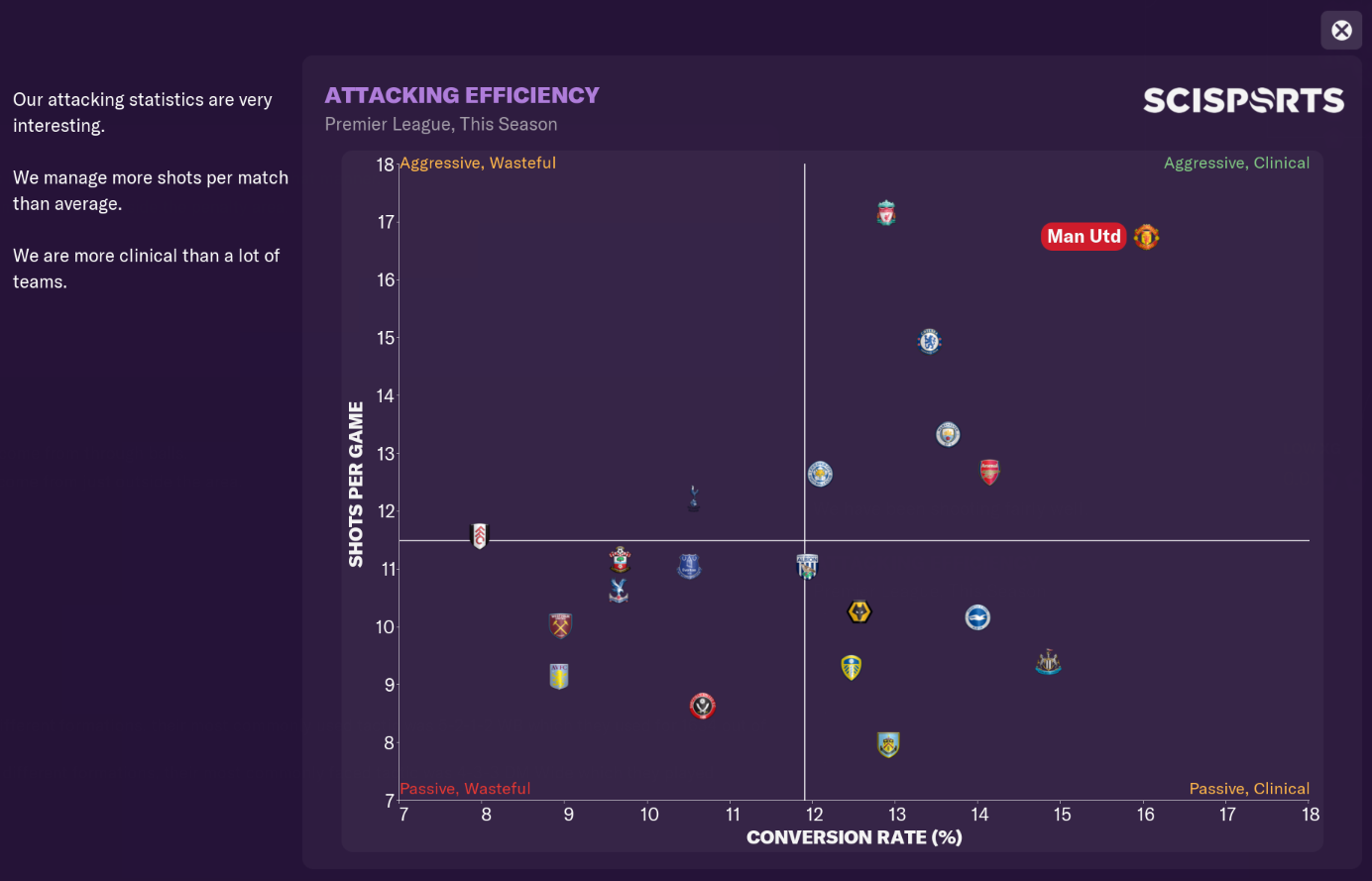 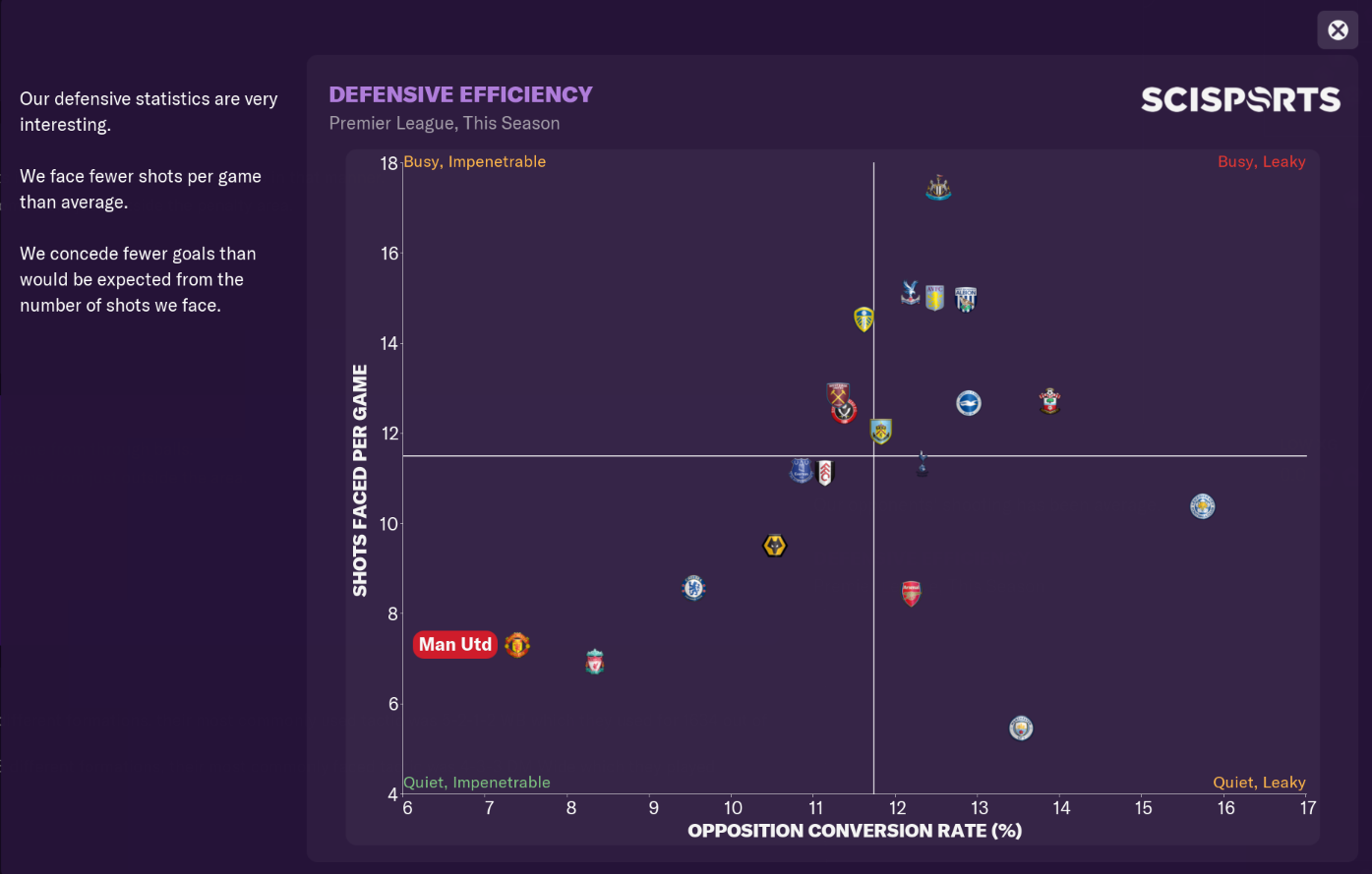 Please feel free to download and use the tactic file provided via the download link or the Steam Workshop link provided and I hope you get a lot of good fun and enjoyment out of this tactic on FM! Guys should you decide to use the Workshop link, please do consider leaving some positive feedback if the tactic does indeed work well for you.

I have also been informed by others who have used the tactic that it has worked well for them, a good example would be one user who played as Celta Vigo and in there first season after 75% of the games played found themselves up in 2nd in La Liga as you can see in the image below: 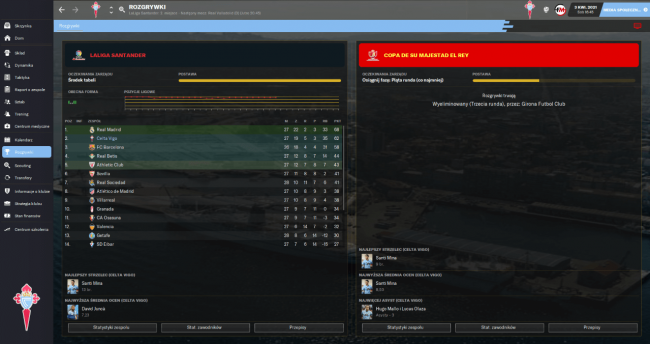 Another great example was another user using this managed in their first season at Fulham got them up into the top 6 in the Premier League finishing 5th with 66 points as shown below: 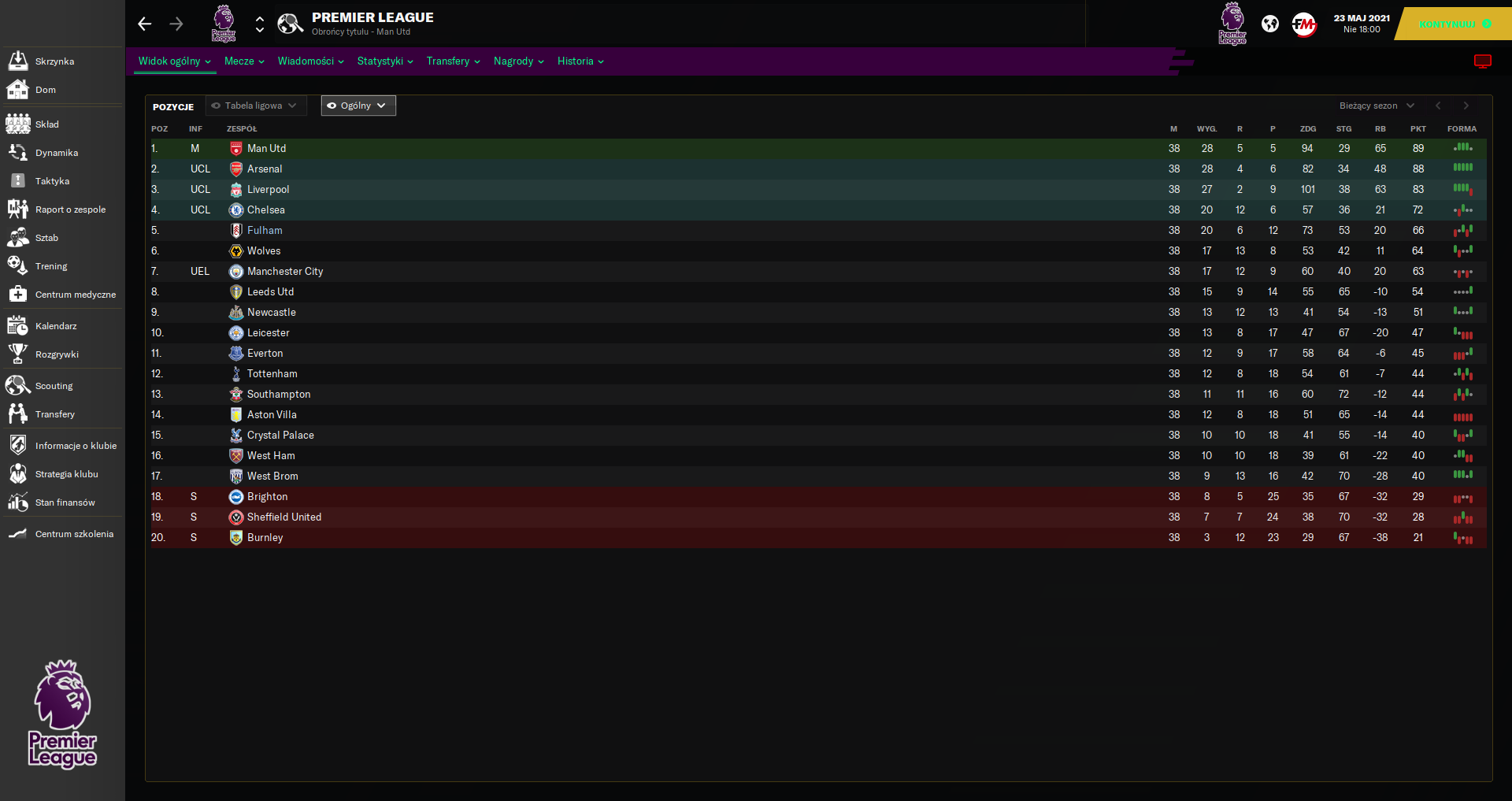 If you would like to take a look at my other content such as my FM21 Experiment Videos or my FM21 Tutorial videos, then please do also check out the links below for my various playlists and my channel where I release content at least 3 times a week regarding FM21.

Finally, you can also find me over on Twitch where I currently am doing my Norwich City save. We are now midway through our 5th season at the club and battling it out for the top 4 spots in the Premier League. Come join us via the link below and drop a follow on the channel.

Hope you enjoy the tactic guys, and of course if you have any questions, do feel free to ask.