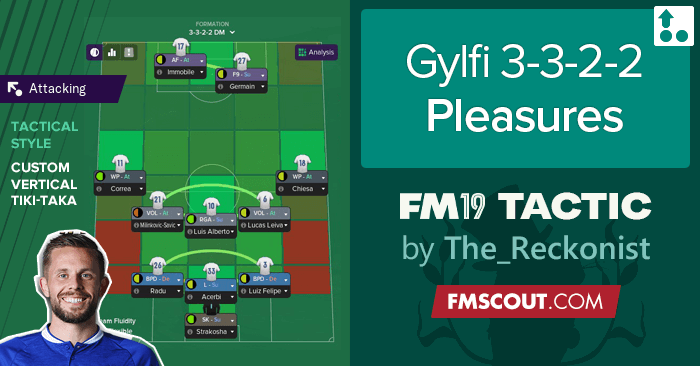 This FM19 tactic would not be possible if it was not for the support from my supporters on Patreon. People such as Plendor, Jannik Ott and Reece Robinson. If you want early access to development of Tactics plus more benefits, follow the links at the end of this page!


This tactic originally started off as a bit of a joke. ‘How many Playmakers can you get in the same side?’ Regista, Libero, Wide Playmakers, Segundo’s and a False 9? That's the GYFLI Pleasure!

Well, over the course of about 30 hours of streaming online and hours of testing offline from myself and people from Patreon, we have an answer. 5. We pushed for 6 but using this system we figured we needed two strikers to make a direct long ball viable. You certainly can try to get 6 going but I found it very difficult to find the correct players. The shape went through the current 2 striker system and a 1 AM and 1 ST system. Both are viable but I believe that 2 strikers provides the best balance. Also, position swaps are possible for both Strikers and WP as I had players able to play both roles. This does seem to mess with Man-Marking Systems.


This is a system with VERY SPECIFIC player types needed which are listed below.


What to expect from the Gylfi Pleasures FM19 tactic:

This is more of an aesthetically pleasing system. Favoring great looking football over cold hard results. Team Makeup:
FM19 has less of a reliance on the right tactic than other FM’s. This game is all about managing your squad and getting THE BEST PLAYERS. This tactic relies mainly on technical players with a heavy reliance on Passing, Technique, Composure, First Touch, Vision and Flair. A high rating for your league on these attributes will favor you greatly.


Player Traits and Attributes for each role

I know you're not able to click your fingers and buy Toni Kroos for your team but 'try' to get players who fit the roles with at least one of the required PPM's in each position and have them learn the missing ones as soon as possible if they are able. I have also included the ingame architype showing you exactly the type of players you should be imagining for each position.

Remember, the above list is the IDEAL and you should aim for one or two of the player traits at 'weaker' teams.

Play CAUTIOUS if against a stronger team. Or even better, have a defensive version of this tactic. Keep the shape but change the roles to suit.

If the other team is camping on their 18 yard line blocking shot after shot, SLOW DOWN the play. Draw them out of position and make one good chance.
Shoot on Sight and Early Crosses can also unlock a stubborn, heroic defence by reducing the time before the shot is fired off.

Set Pieces:
For the first time I have kept the set pieces I used on the System. Due to highly technical players, Throws are short. Free Kicks from Wide and Deep are aimed to best Header and Corners are on a 3 rotation. One Near Post, One Far Post One 6 Yard box and a CB is placed in each of these areas for Each of these corners. Expect Success.


Of course the AI will adapt to all tactics over time. Always have a plan B ready when you see this happening.