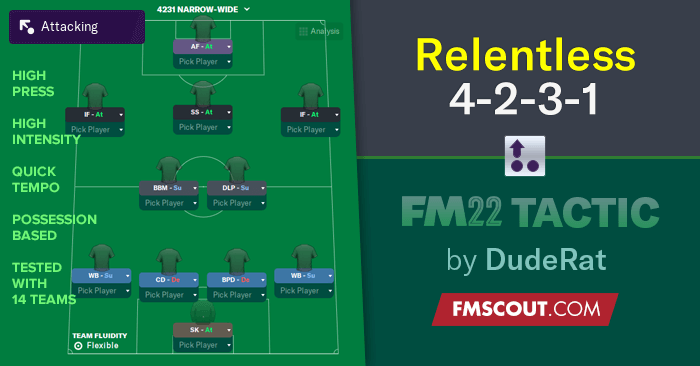 I felt I had to share this tactic, as since FM14 I have been struggling to recreate a tactic that was utterly dominating.

Is this the same tactic.... no, but on my journey and many frustrations I have created something that is quite special.

This tactic was originally inspired by the Chelsea team using Matic and Mikel in centre midfield, with Oscar, Hazard and Willian in the attacking midfield strata.

While I have had some limited success with these narrow formations, consistency eluded me and I began to realise that the ME definitely preferred the wide areas to be covered.

So to make myself feel better and keep the ME happy, I created a 'Narrow-Wide' 4231. 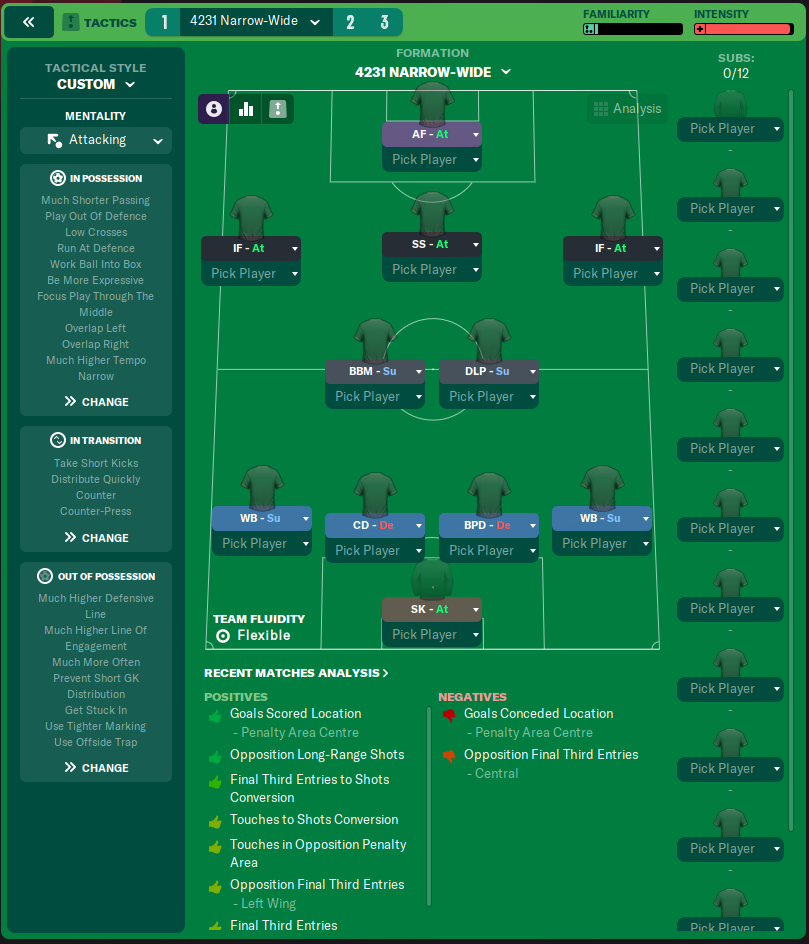 In essence, the AML and AMR generally sit narrow to help with possession, but to also make the threatening opposition DL and DR have to leave their comfort zone of the flanks.

The AML and AMR often move into the channel between the FB's and CB's creating a decision for the opposing defence, if the CB steps in to help, the SS moves into the vacated space. If the FB follows, our own FB's move into the final third.

The beauty of the tactic are the options that the wide players give themselves, sometimes staying a bit wider, sometimes coming deeper, or narrower, but always looking to break the line and move into channels.

The wide players are so important in this tactic as they are given license to express themselves offensively.

Ultimately the tactic is aggressive in and out of possession.

With the ball, the team move the ball extremely quickly, not allowing the opposition to reset their shape or get too close.

With much shorter passing, some of the intricate moves are a joy to watch, but the passing is never without intent, the players are always looking for a breaking run or a player in space.

The be more expressive instruction allows for natural vision and flair to allow these passes to happen, while running at defence means that players will exploit one on ones where prudent.

The higher defensive line and very narrow instructions mean that the defence stay close to the midfield and the DLP drops in to pick up the ball.

The BBM covers a lot of ground and scores a fair share of goals, but also drifts into space when available.

The AF, although very basic in his instructions is devastating, space is always available due to the constant runs of the AML, AMR and AMC.

In testing the AF for top teams consistently scored 50+ goals a season!

To test this tactic I took 15 teams from the top 5 leagues, England, Spain, Germany, France and Italy, I then chose the teams who's media prediction was 1st, 10th and 20th (except Bundesliga with 18 teams and EPL where I chose Liverpool over Man City, simply because many of the tactics I have seen have used them, so this should help comparison).