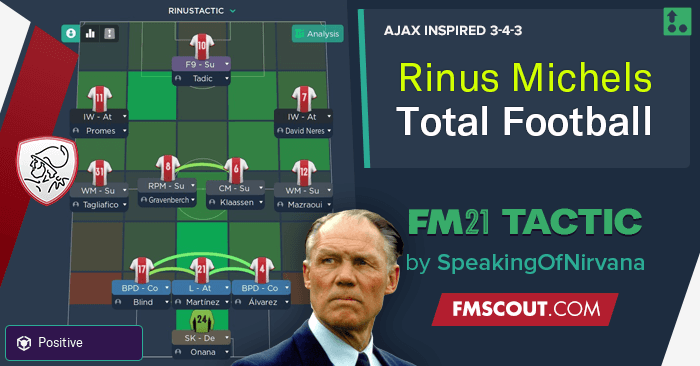 I watched a youtube video uploaded by Tifo Football, detailing the tactis used in the mid to late 1960s/ early 70s by Rinus Michels in Ajax famous team containing Johan Cruiyff and Johan Neeskens. It really inspired me to look into the style of "Total Football" more and it's versions used by other managers throughout the centuries.

Last FM i saw a tactic uploaded to this site titled "Johan Cruyff’s 3-4-3 Total Football Tactic for FM20" by RDF Tactics which is based on Johans evolution of the style. He made an outstanding recreation which i really enjoyed and had great success with. So this tactic is heavily inspired by both Rinus early creation, and also the tactic from RDF. 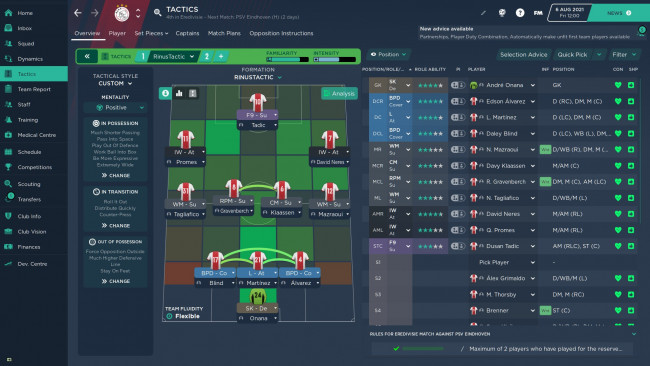 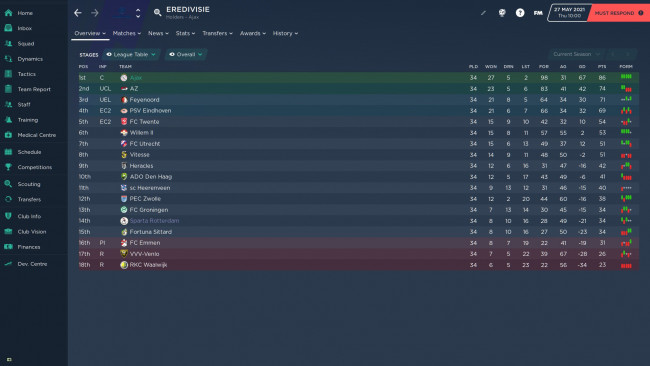 So, the formation used by Rinus was actually a 4-3-3. I initially was tempted to make this my formation but one of the most important parts about the team is it's use of a Libero at centre back. A back 4 would've meant i wouldn't have been able to propely use this role.

The tactic is designed to be very wide so the ball can be worked into the box from all angles. The wings were attacked perfeclty and pretty much every goal started from wide positions. In Rinus squad, when the libero pushed forward a solo centre back would be left behind who acted as a sort of "sweeper" and the two full backs would support down the flanks.

In my version instead of this, i had the two centre backs sitting wider to give the wings extra support, therefore actually leaving the centre exposed if Martinez has pushed forward. This was at first a huge problem, but by changing the defensive width to "force opposition outside" that managed to fix that as the two centre backs would drop slightly and move back into the centre. Fortunately the counter press was so excellent that we were rarely ever counter attacked.

Most conceded goals would be down to fast strikers getting around the centre backs, which there isn't really much you can do about. I had the wide players set to mark any wingers so they'd drop back and help defend if we were on the back foot. I deployed Davy Klaassen in the RCM position with some simple instructions. And set Gravenberch in the LCM position as a Roaming Playmaker which was to great effect.

In Rinus team Neeskens was an absoloute engine. He pressed and pressed non stop. Davy was my Neeskens. But rather than winning the ball in the centre of midfield, the two central midfielders ended up pushing the opposition out wide where my wide players could win the ball back. If you use this tactic I'd reccommend keeping these wide players as converted wing backs.

This press ended up being excellent against larger teams. I even managed to beat PSG in the CL groupstage and Chelsea 5-1 (7-4 agg.) in the EL QF. The inverted wingers, Quincy Promes and David Neres go without saying. I made sure they stayed wider to really make it tough for opponents on the flanks, and when they'd cut in Dusan Tadic was deployed as a false nine (The Cruyff role) and they'd usually link up with 1-2s and quick interchanging passes in/around the box.

The front 3 scored 80 goals and assisted 59 times in all comps between them. The attack was absoloutely outstanding. Martinez as the libero did a great job of helping the midfield, i was worried he'd get too far forward but he actually ended up playing more like a Deep-Lying Playmaker, he ended the year with an average rating of 7.51 in all comps. 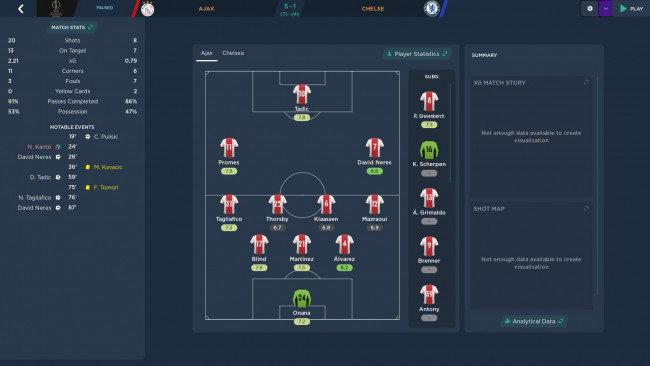 By the end of the year we ended on 86 points with only 2 losses and 5 draws, scoring 98 goals in the league and a goal difference of 67. Unfourtunately we failed in the CL group stage but did go on to win the Europa League with an emphatic 4-1 win in the final against FC Porto.

GIven another go i think we could compete in the CL. In the league we had an average possesion of 60%, completing 16648 passes at a 91% completion rate. In the Europa league we scored the 2nd highest amount of goals with 25 goals, 6 behind AC Milan. But obviously we didn't compete in the group stages unlike Milan who did. 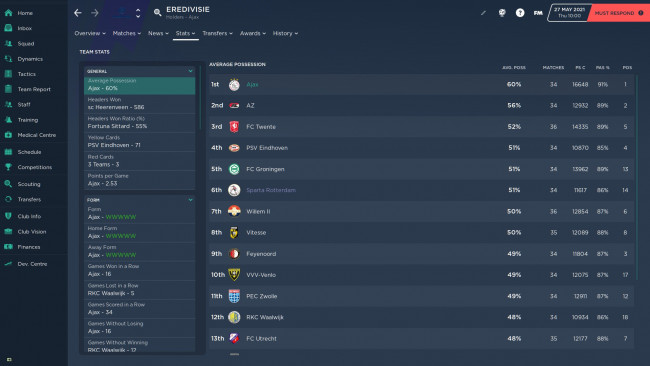 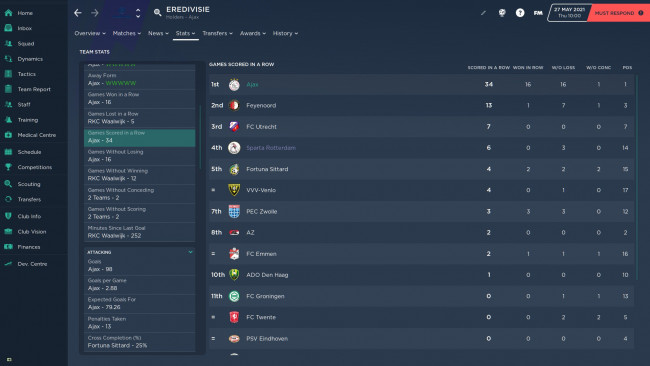 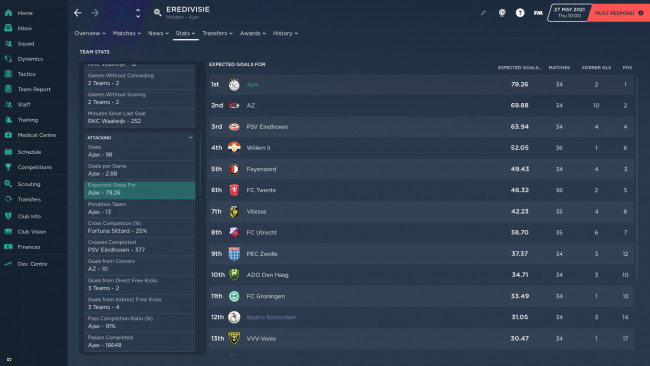 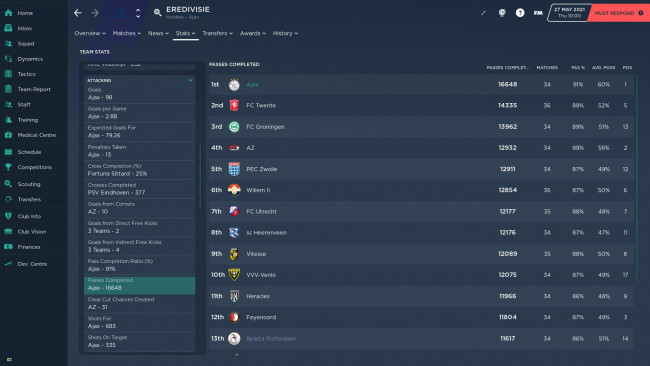 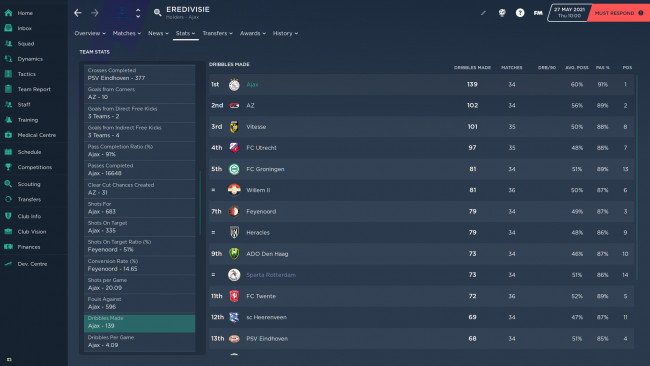 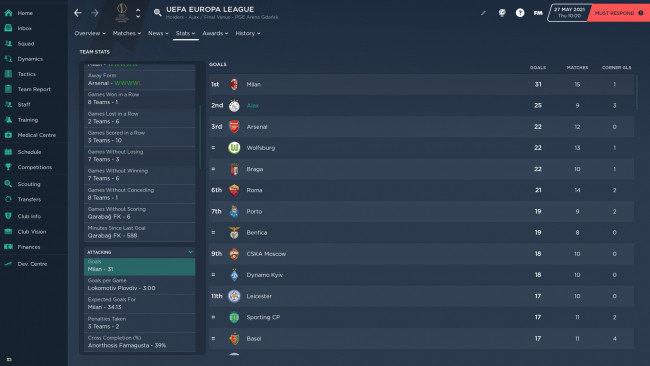 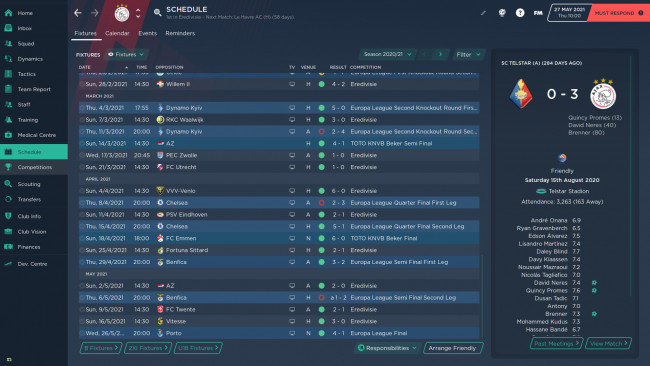 Finally with this test save i did purchase 3 players, i brought in Brenner as a backup False Nine. I brought in Thornsby as a back up midfielder. And i also purchsed Grimaldo. Grimaldo was purchased as during the first week of the game the board accepted a 50 million euro offer for Tagliafico. I purchased Grimaldo 3 or 4 days later and Tagliafico reject their the bid. So i barely used Grimaldo as i wanted the test to be as close to real life as possible.

I left the general training to my AssMan because for some reason i can't seem to get training right this year. Opposition instructions were very simple i just made sure Wingers were always marked.

Thank you to anyone who uses this tactic and any improvements you can find feel free to post in the comments. Any feedback is appreciated.