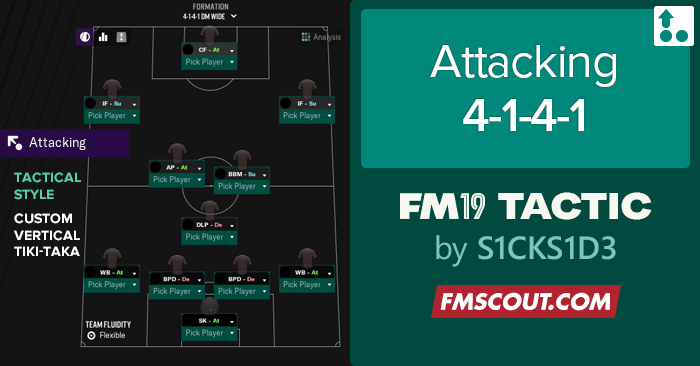 This tactic intends to have a demolishing on attack a rock solid defense and a lethal counter.

A mix between the vertical tiki-taka (you will see lots of short passes and good possession that can range from 55% to 65%) and gegenpress (aggressive and urgent pressing and fast counters).

Also, it will be common to see the opponent team strangled inside their own box.

Initially this tactic was giving me wins of 6-1, 5-2 and so on, but I tweaked it during these 8 seasons so now the defense is much more solid although i score less goals. But don't fool yourself, big wins are still going to happen (just won 7-0 vs Real Madrid in the Champions League semi-finals).

This is not a match engine exploit tactic so don't expect any miracles.

I only buy players that will fit in the tactic, not the opposite. So if you don't have the right men for the roles you may not experience the same results.

In general and for any position we will want ALL players to have good Determination, Concentration, Acceleration, Pace and Stamina and Passing.

These are the roles we're going to use. Individual instructions (besides the default role ones) will be have to be set manually.

Player examples are from my 2nd Season Champions League win with Benfica.

The attributes I'm highlighting as good or required are not the only ones needed, I'll leave that for you to think about when understanding what is asked for each of this players while watching your team play.

The keeper will act like a sweeper to prevent attacks that may penetrate your defense from through balls. Besides the obvious ones, lookout for attributes like Passing, Decisions, Concentration and Anticipation.

Our Wing-backs will be very involved in the attack movement, making crosses and being involved in underlaps. Required to have Pace, Stamina, Acceleration, Tackling, Technique, Dribbling and Crossing.

For our playing style it's very important these players to have lots of Pace and Acceleration (both 15 or above) to recover and catch the attacker that's running from a through ball. Other important attributes are Passing (above 13) since he will be making some long passes from time to time, Concentration, Anticipation, Decisions and Positioning are also required.

This player is very important and all the phases of the game. He will act as a pendulum of your team when attacking or defending. We don't want a big guy that can only tackle, we want someone that can defend but also make plays and makes the ball go around the pitch. Requires good Passing, some Tackling (13, 14 or above), Positioning, Vision, Teamwork and First Touch. Sandro Tonali is a great example of what we're trying to achieve here.

The Advanced Playmaker will be the main creative, the guy with the 10 on his back. Required to have good Dribbling, Passing, Technique, Vision and First Touch.

The inside forward are the guys that will tear the opposite defenses apart. Lots of assists, and goals scored from cutting inside or from the crosses that come from the other side. Required to have good Dribbling, Finishing, First Touch, Technique, Passing, Crossing (not super important, it's ok if he only has like 13 or 14), Flair. Composure and Vision are a Plus. And of course, Pace and Acceleration.

Useful preferred moves: Cuts Inside From the Right Wing

Useful preferred moves: Cuts Inside From the Left Wing

We need a well rounded ST since this guy will be involved in the attack in all sorts of ways. No point in having someone with 19 heading and then only 10 on Technique or Passing. Besides the ones mentioned we want good physical attributes and good Finishing, Off the Ball and Anticipation. First Touch also important. I'll be very happy if you guys can test it on your save and tell me how it's going or/and give suggestions on how it can be improved!

Thank you for visiting and good luck my fellow managers.