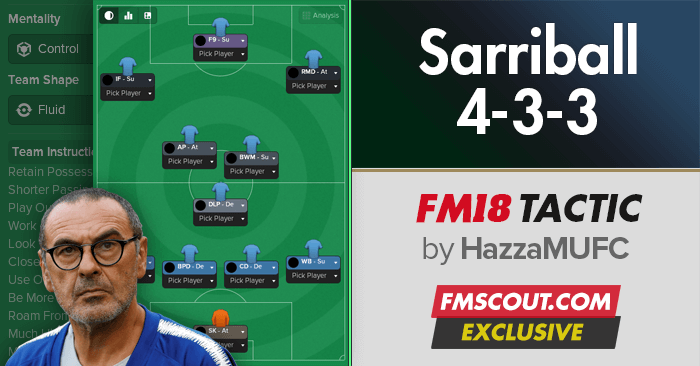 Welcome to my replication of Maurizio Sarri's 4-3-3 system he has used to great effect in his 3 year stay at Napoli.

Sarri likes to build up from the back patiently starting with the goalkeeper who distributes short to one of the central defenders who then look to find the deepest lying midfielder, they do this to try and lure the opposition attacker(s) into pressing them thus either tiring them out or causing the opposition midfielder(s) to push up opening space for the Napoli's more advanced midfielders to move into. When Napoli have possession they look to play quick incisive one touch passes with lots of movement to open up vertical passing lanes while retaining possession and trying to overload the opposition. Similar to Guardiola, Sarri looks to win the ball back quickly by closing down the opposition in their own half forcing them into a misplaced pass or a clearance up field which complemented with a high line means Napoli can regain possession and try to rebuild attacks from there.

Translating this into Football Manager

This isn't all that easy due to match engine limitations however after hours of testing I'm somewhat pleased with the results I've gotten and happy enough to publish them. Please note that this is just a blueprint, its not a plug and play tactic to win every single game and dominate Europe year after year its something for you to start off with and develop into a tactic that is ideal for you and your current crop of players. I haven't included any player traits into the player role breakdown simply because its all down to personal preference and opinion, the attributes are far more important personally. Ball Playing & Central Defender:
Must be comfortable on the ball, all around good defenders with strong Physical, Mental & Technical attributes. (Naturally you wouldn't play a Ball Playing Defender with the instruction to play out from the back as they essentially cancel each other out but Koulibaly did play longer passes occasionally.)

Ball Winning Midfielder:
Could swap this out for a Carrilero or a Box To Box Midfielder however I prefer the mentality of a BWM. Attributes to prioritize would be Work Rate, Bravery, Team Work, Natural Fitness, Stamina & Tackling.

Advanced Playmaker:
An all around quality player is required, must have solid physical, mental & technical attributes, this role is basically your attacking outlet and you will force a lot of your attacks through him.

Inside Forward:
Strong technically, physically & mentally. Being right footed is ideal so he can naturally cut inside. Standout attributes would be Off The Ball, Passing, Technique, First Touch, Vision, Flair, Acceleration, Balance & Pace.

False Nine:
An all around quality player is required, ideal attributes would be First Touch, Passing, Flair, Off The Ball, Balance, Agility, Teamwork, Finishing & Anticipation.

Raumdeuter:
Essentially a wide poacher who will look to make bursting runs into space the opposition defenders leave, the ideal attributes would be Finishing, Anticipation, First Touch, Composure, Off The Ball, Stamina, Acceleration & Concentration. The idea behind this is to encourage quick incisive one touch football with lots of off the ball movement and freedom for the players to express themselves. When out of possession try to win the ball back as quick as possible by closing down and pushing the defensive line up to restrict space for the opposition and force them into playing it long losing possession or play it back/sideways. Close down the keeper to stop them from trying to build from the back. I went on a manager holiday from the end of December right up until the end of the season just to see how the tactic performed without any kind of influence from myself during the games and I still won the league comfortably. This isn't a plug and play tactic; it's just a blueprint for you to have a foundation to build on and ultimately get a great all around tactic for your team.

I hope you enjoy and found something useful from this, thanks for reading