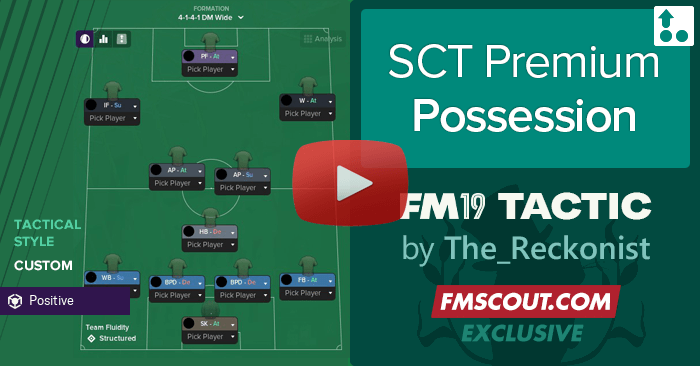 Year 11 of Scholes Can’t Tackle. Possession based system with enough tactical flexibility to be used for matches you are expected to win and with one click throws a spanner in the plans of giants.

IMPORTANT - Default is set to BALANCED mentality. Change it to POSITIVE for games you expect to win.


IMPORTANT - Certain Player Instructions are missing from the Download. Main one is AP:A should have 'Get Further Forward clicked and both WB and FB should have take less risks clicked.

Tactic for Football Manager 2019. This is a Possession 4-1-4-1 formation for FM19 based loosely on the Tiki-Taka system of Barcelona but with refinement to be effective in the FM19 Match engine.


This is a system with VERY SPECIFIC player types needed which are listed below.

What to expect from the SCT FM19 tactic:


This whole system is designed to remain defensively sound, have enough possession to achievement dominance and have incisive attacking passes creating high quality chances in high % conversion zones and to fit all clubs based on current squad and player trends. Team Makeup: It is very role dependent however, the primary skills for most of the roles are good ratings on Composure, Concentration, Technique, First Touch, Teamwork, Passing and Decisions. A high rating for your league on these attributes will favor you greatly.

Key Attributes and Suitable Traits for each role

I know you're not able to click your fingers and buy Toni Kroos for your team but 'try' to get players who fit the roles with at least one of the required PPM's in each position and have them learn the missing ones as soon as possible if they are able. I have also included the in-game archetype showing you exactly the type of players you should be imagining for each position.

Remember, the above list is the IDEAL and you should aim for one or two of the player traits at 'weaker' teams.


Set Pieces: I have left Set Pieces blank as they depend entirely on your teams make up. However I will say that you should take advantage of the fact you will have great technical players and consider short corners, free kicks and throw ins.

AI Managers: Of course the AI will adapt to all tactics over time. Always have a plan B ready when you see this happening.