When you play the regular Singapore Premier League that FM20 has created, you'll eventually get frustrated with many aspects of the game, especially when you attempt to bring clubs up to international levels. In one of my oldest save files, my poor Tampines Rovers had so many schedules overlaps from playing the Club World Cup, Asian Champions League, along with domestic league and cups, causing matches to be constantly rescheduled such that I had can have 4 matches in a week (Monday, Wednesday, Friday, Sunday... go figure).

In the regular unedited database, FM creates two reserve teams for the clubs in the Singapore Premier League (top division), the U19 and U18 teams (except for DPMM, Albirex Niigata (S), and Young Lions). While the U18 teams play in the Singapore Prime League, the U19 clubs are... redundant. Zero fixtures for the whole year, unless you take the trouble to arrange friendlies for them.

Lastly, while it is factual that Singapore clubs are not well supported financially... this is just sad in the FM world. Without money, you just can't make it globally in this game. While the Asian Champions League is within reach with players of Current Ability (CA) of around 80 to 120, these players simply do not make the cut in the Club World Cup. I cannot recall how many times I have been humiliated by European clubs by a tennis scoreline. How realistic.

How sad it is that FM21 was released before I was able to share this database with you guys, but life has been hectic and I haven't had time till now to share this joy with you guys - the frustrations that have created this new completely unrealistic Singapore database! I am still unsure about getting FM21, so I cannot promise an FM21 version of this as of now, but at least for FM20, you can enjoy this database with upgraded finances, reserve teams that make sense, and many more, which will be described in detail below.

Note: This database is not to reflect the real world. In fact, this database, as emphasised many times above, is to reflect an alternate and impossible reality that my poor Singapore will make football relevant and invest money into the poor league. If you are looking for a realistic Singapore database, then this is not the place for you! You have been warned!!

The Fake Singapore - What is upgraded?

How great it is to create a completely unrealistic world whereby money actually exists in the leagues!! Here are some of the key changes made to the database before we go on to more details about each league, cup, and a display of one of the Clubs:
- Starting dates are offset for a year (Meaning, the game only starts in 2020; cannot start from 2019)
- All 48 clubs taking part in all 3 domestic leagues have been made professional
- All 48 clubs have their own stadium (as compared to the current stadium sharing concept, which can be a headache to deal with during fixture arrangements)
- All 48 clubs have received some sort of financial boost, but you can still bankrupt your club without proper financial management
- League and Cup prize monies have been increased (more details below)
- League and Cup schedules have been rearranged to make sense (and not clash with every single other competition out there in the world)
- Sub rules for Leagues = 3 from 7
- Sub rules for U23 Leagues = 5 from 9
- Sub rules for Singapore Cup = 3 from 7 + 1 extra-time sub
- Sub rules for FAS Community Shield = 6 from 7
- Some name changes to Leagues and Cups for absolutely no reason
- Our best friends, VAR and goal-line technology, have been added for all Singapore Leagues and Cups (except the Reserve ones I think)
- Deleted the U19 and U18 teams; instead created U23 teams that play according to main team's positions in the League
- Reworked Nationality rules in Singapore -> changed to accumulative of 2 years in Singapore instead of continuous in 4 years
- Changed foreign player rules in the Leagues and Cups (more details later)
- Added Northern Mariana Islands as a Worldwide Governing Body Full Member for no reason whatsoever -> Northern Mariana Islands will now appear in Asian National Tournaments, such as World Cup Qualifying (Asian) and Asian Nations Cup Qualifying

Not an intentional advertisement for the AIA Group, but they are the main sponsors of the league right now, so in all fairness, they get to have their sponsor name there. From 2015 to 2019, the Singaporean Premier League has seen DPMM win twice and Albirex Niigata (S) win thrice... that's right, Singapore clubs has not won the Singapore league. Kudos to the two foreign teams on making vast improvements since they've joined us (Albirex since 2004, DPMM since 2014), but also it feels bad not to see a domestic club win the domestic league. Therefore, these two dominant teams have been very regrettably removed from the top division and cast down to the second division and further blocked from promotion to the AIA Singaporean Premier League. Sorry guys!

Now moving on to one of the worst-performing clubs in league history - the Young Lions. Entered in the S-League since 2003, they have not finished higher than 7th since 2008... in a league with about 9 to 12 teams. From Wikipedia, our most reliable internet source, "By entering the Young Lions into the S.League, the FAS hopes to expose young players to top-level competition, thus helping to prepare them for international tournaments such as the Southeast Asian Games." It greatly pains me that the future of Singapore football is allowed to suffer defeat after defeat in the domestic league, making defeat a regularity in their lives. However, reality aside, the Young Lions make absolutely no football sense in this particular FM world since the FM managers (both you and the CPU) do not simply call all 23 players from Young Lions to represent the Singapore U23. Therefore, bye-bye Young Lions, off to the second division you go, and no promotion for you either. I seriously considered removing this team, but I have no idea why I decided not to. If you prefer for this team to be removed, just drop a text below and I can create an alternative reality where Young Lions was just a dream. (Same to be said for DPMM and Albirex; if you prefer them in the top league, removed, or whatever, just drop messages below)

Therefore, who are the 16 in the Top Division? Huh, did I say 16? That's right, we now have 16 teams in the Top Division! Playing home and away against each team once, we will play up to 30 games per team per season! The teams are... *drum roll* 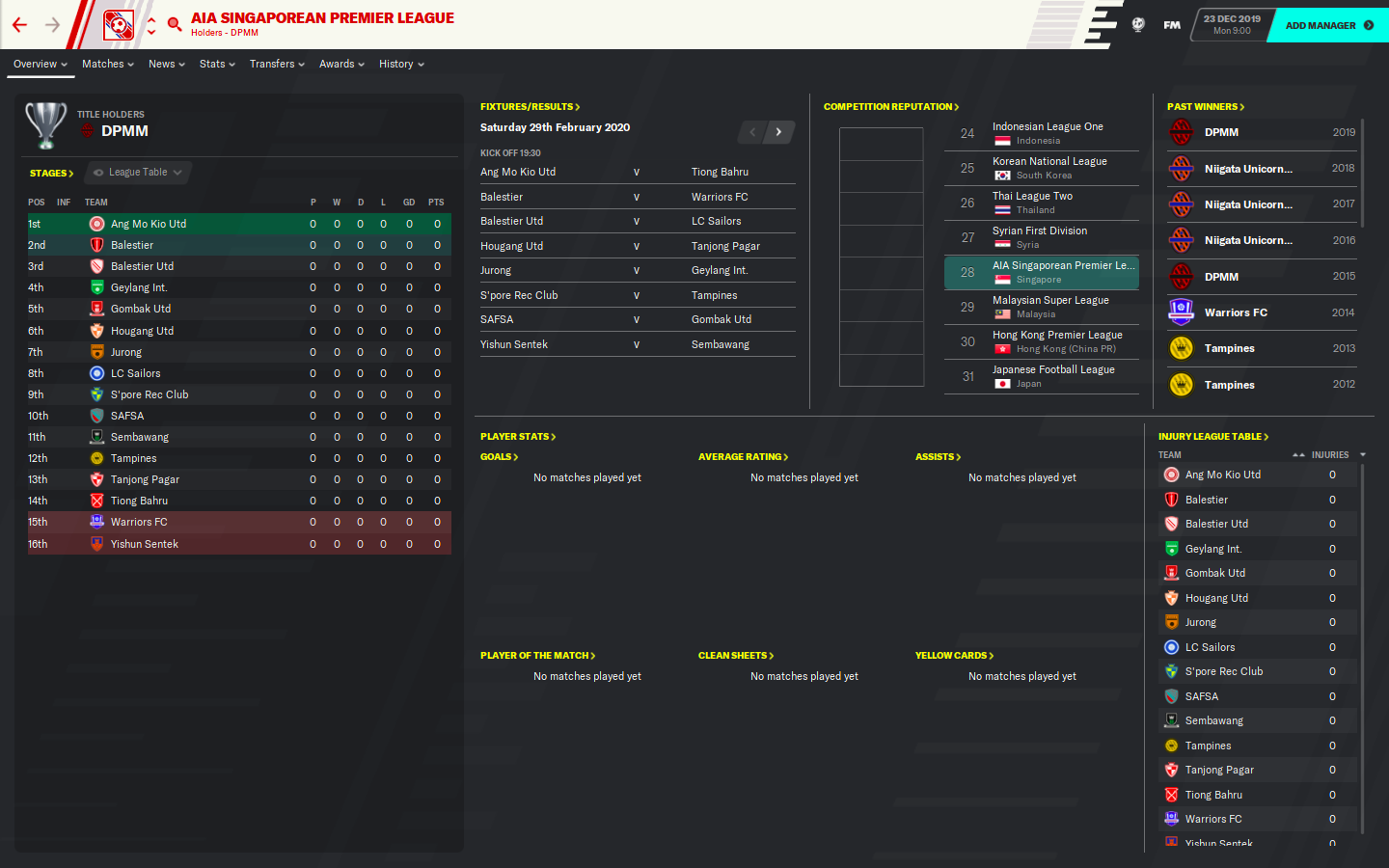 Here are the sixteen magnificent teams in the AIA Singaporean Premier League! And you wanna know what else is great! The completely unrealistic prize money! 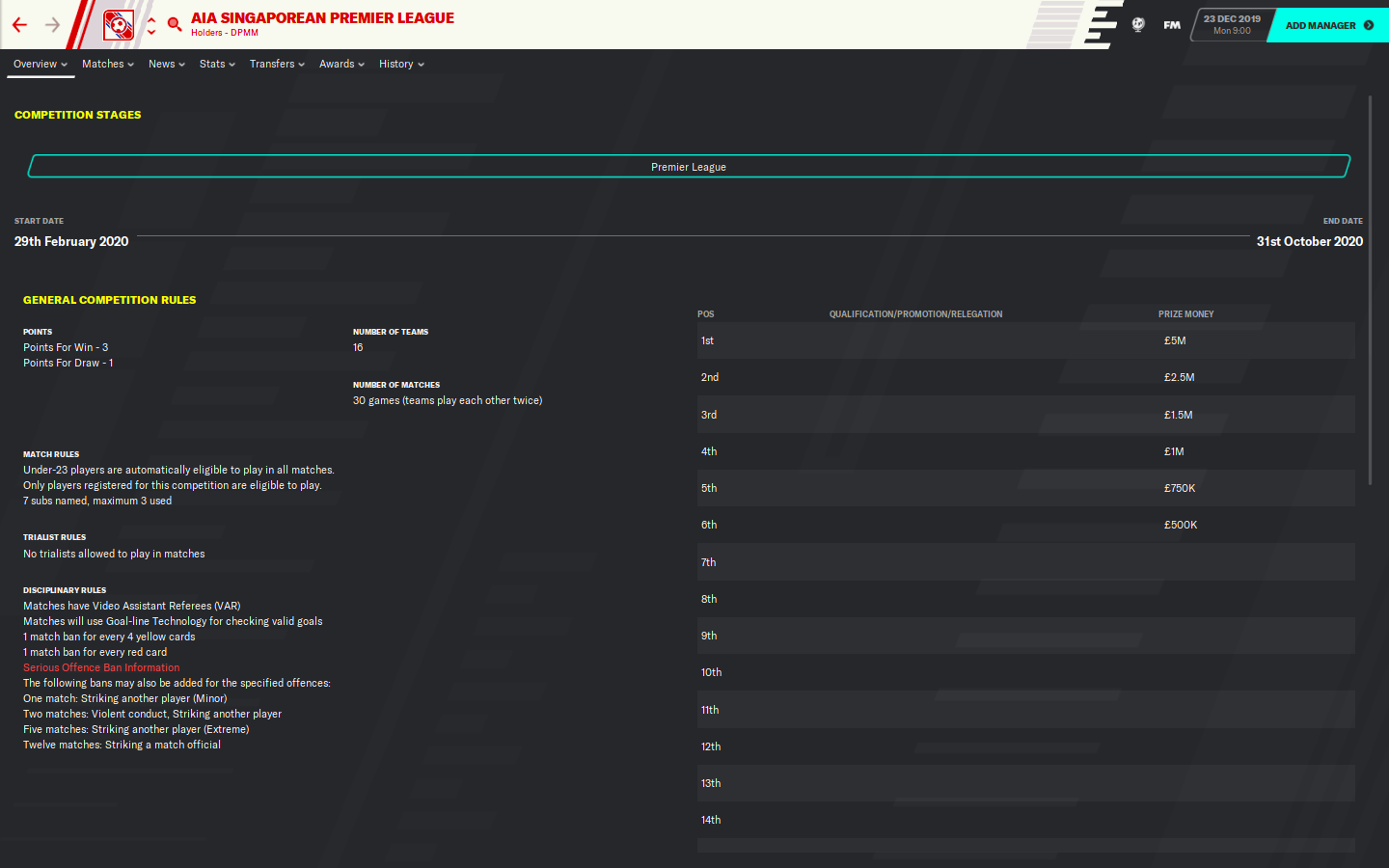 Did you see 5 million? You absolutely did! Will Singapore ever invest this kind of money into the league? No way!! But that's what's great about a fake database -> anything goes! 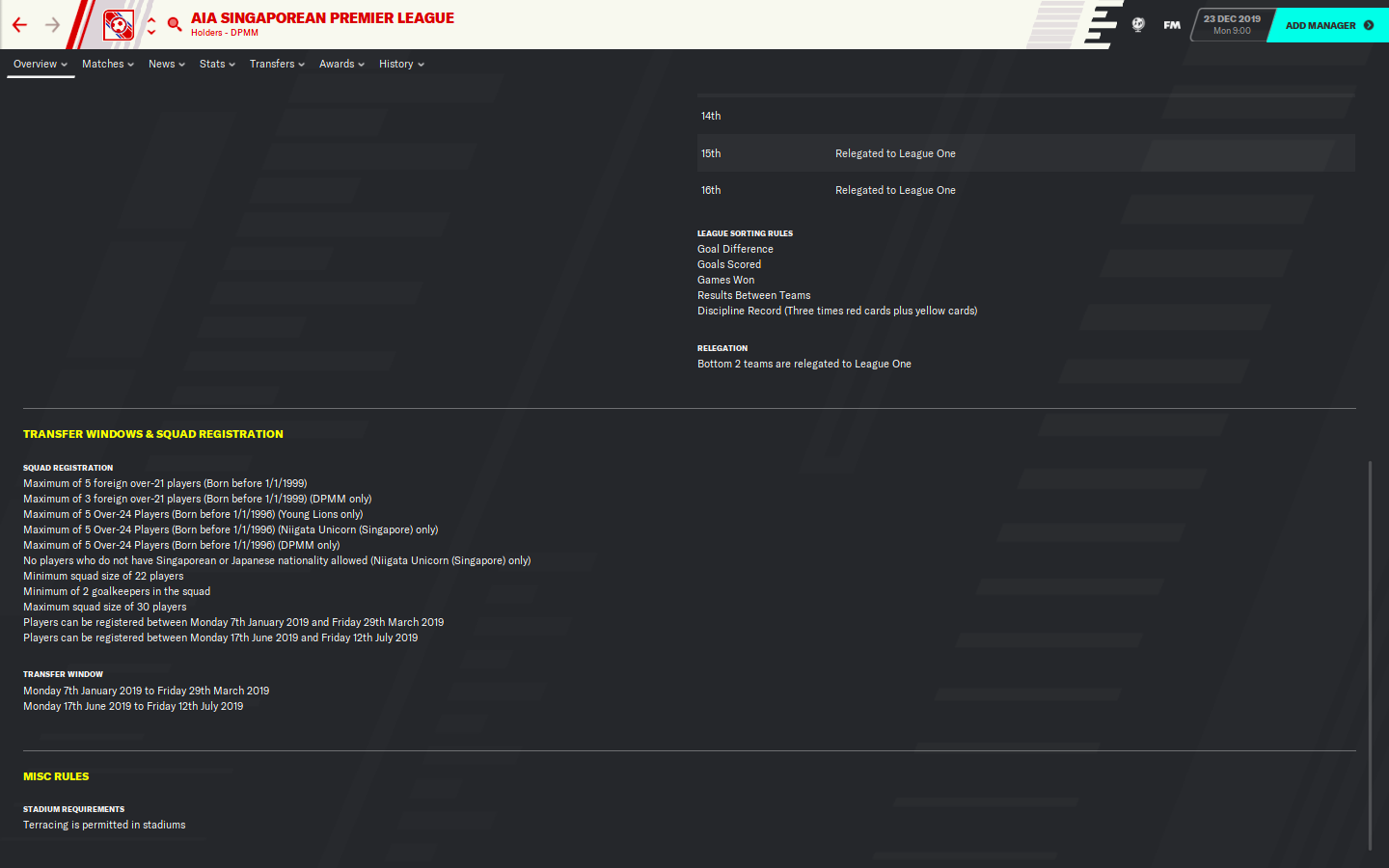 On a more important note, player rules have also been slightly changed. If the image is not clear, the rules are:
- Maximum squad size of 30
- Maximum of 5 Foreign players over 21 years
- Minimum of 2 goalkeepers in the squad
- All U23 players do not have to be registered (regardless of nationality)
Although these rules are wayyyyyy more relaxed than current rules, there still contains limitations (of sorts, unless you spot the loophole here *winks*) to the number of foreign players you can bring in. Also, I'm currently playing with an edited competition format for the ACL and ACC, with similar foreign player rules. Therefore, if you play this database with the good old ACL and ACC, please take note of the foreign player rules there so you won't create unnecessary unhappiness with your players when you exclude them from the Champions League squads. Did I say I edited the ACL and ACC? Yes of course; I find things wrong with every single competition in FM and edit them, with the EPL being an exception. If you are interested in my edited ACL/ACC file (which incidentally, contains dynamic qualification too), just a text below and I will spend time uploading and describing it if I have time to do so!

Oh yes, lastly, stadiums! No more sharing stadiums, as you'll see below! And most stadiums would have received some sort of a capacity boost, if not crowd size would be another tragedy in our poor league. 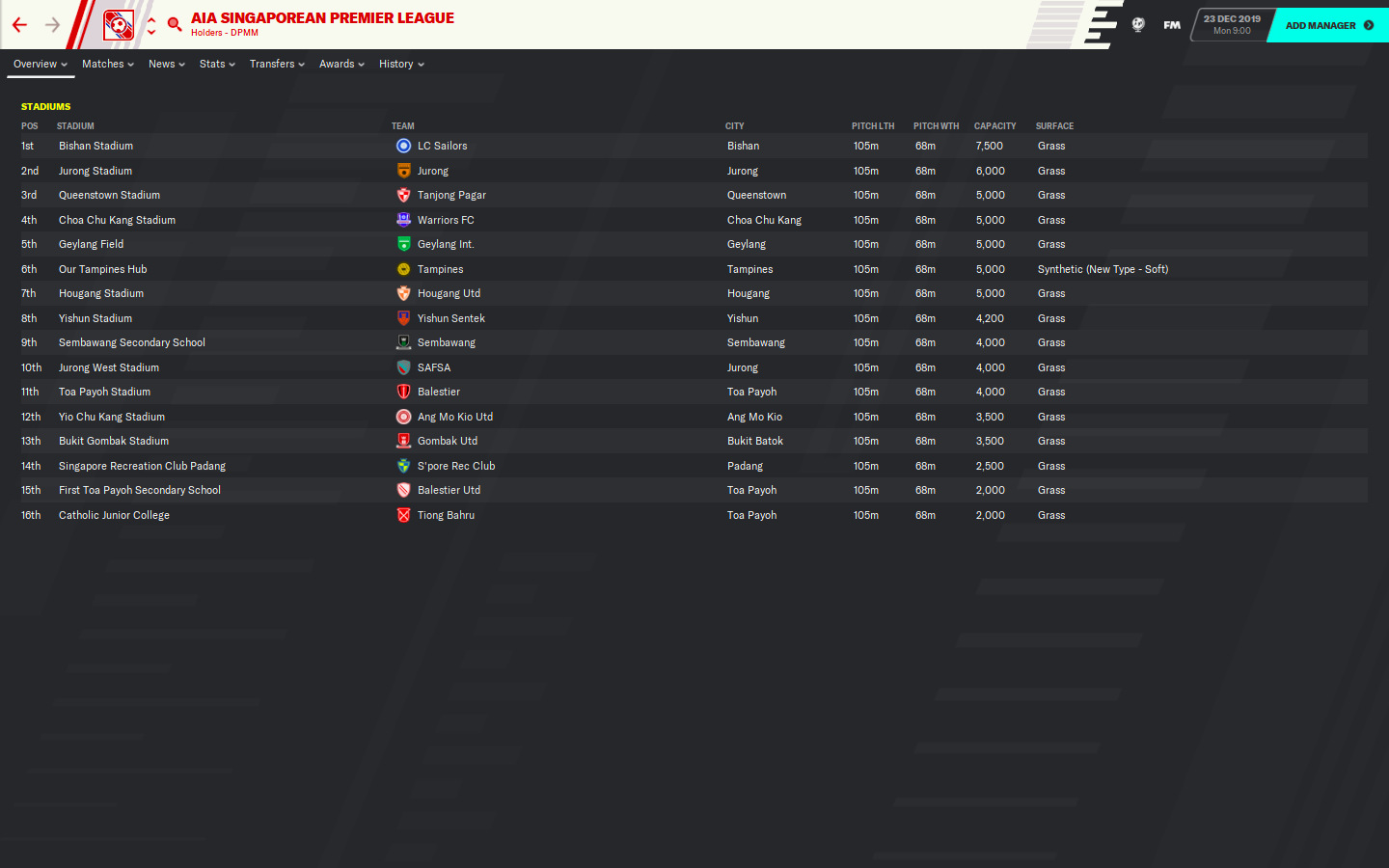 Sounds familiar (EFL1)? Maybe, maybe not. But our dear DPMM, Albirex Niigata (S), and Young Lions all feature in this league, which is the second tier to the AIA Singaporean Premier League, with 2 promotion spots up for grabs for the other 13 clubs in the league. Similar to the top league, there will be prize money increases, foreign player rules (similar to above), and each club has its own stadium. Oh, foreign player rules are slightly different for DPMM, Albirex Niigata (S), and Young Lions. I have not played any of these teams yet, so if anyone who plays these teams face issues, please let me know in the comments below! 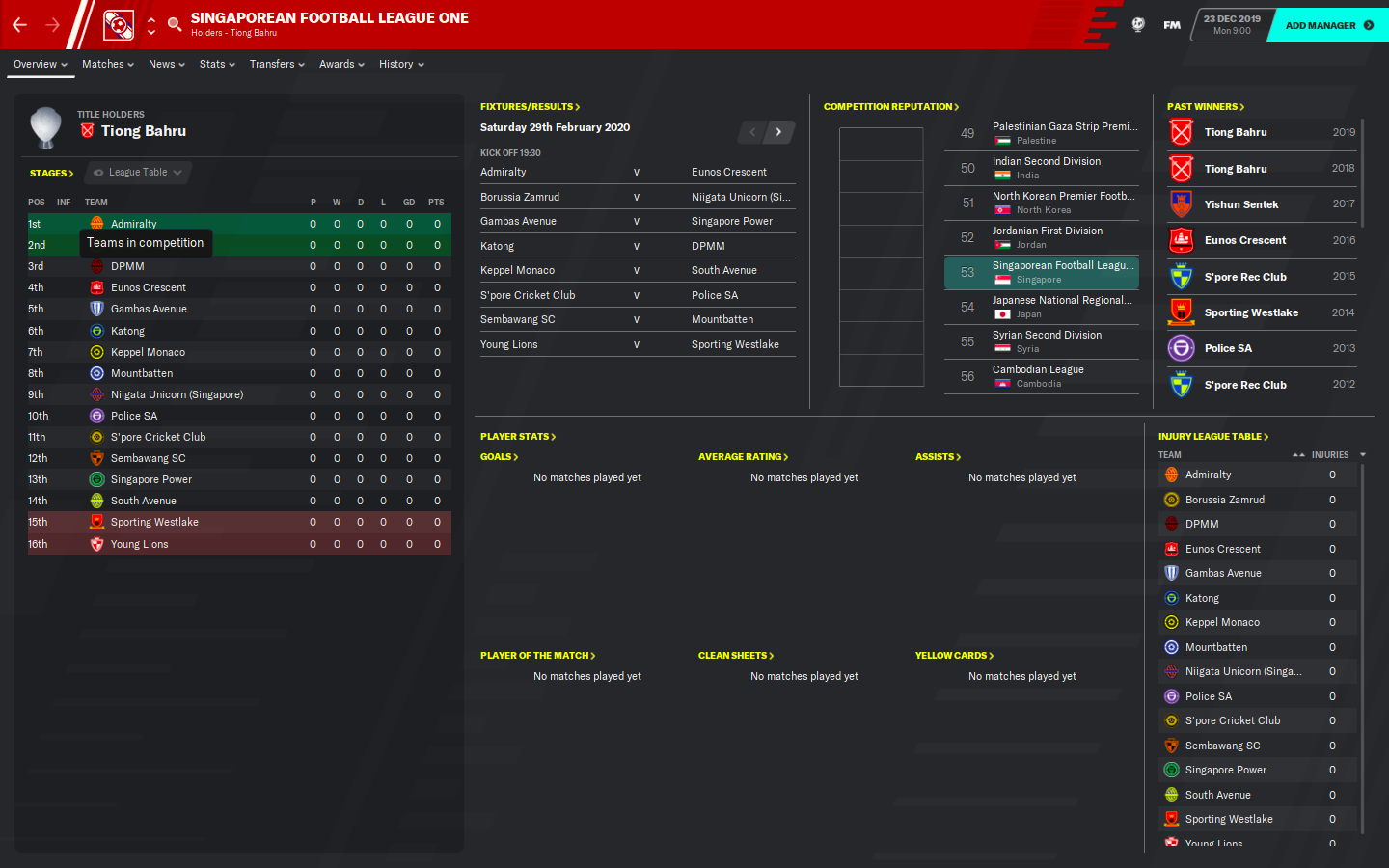 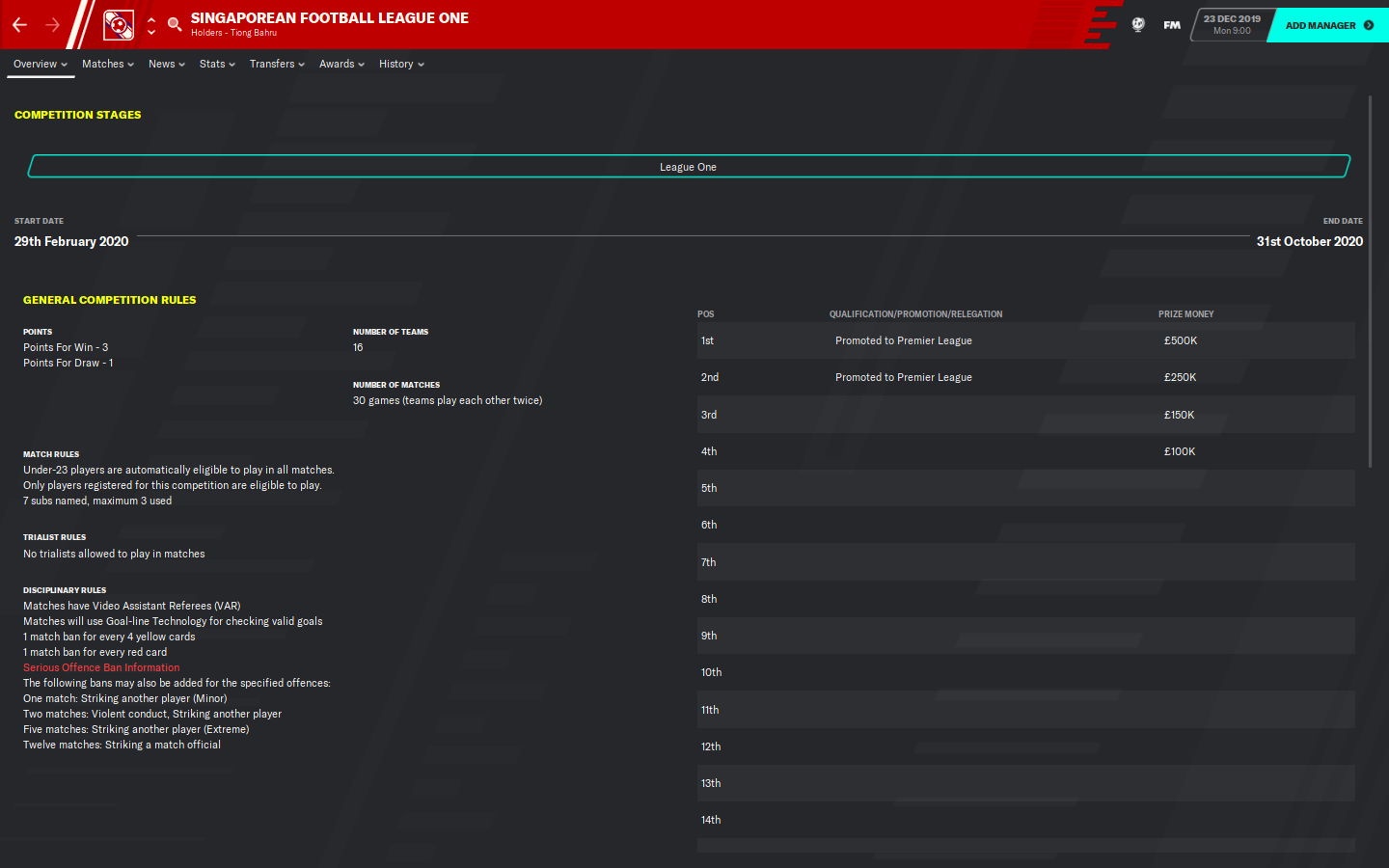 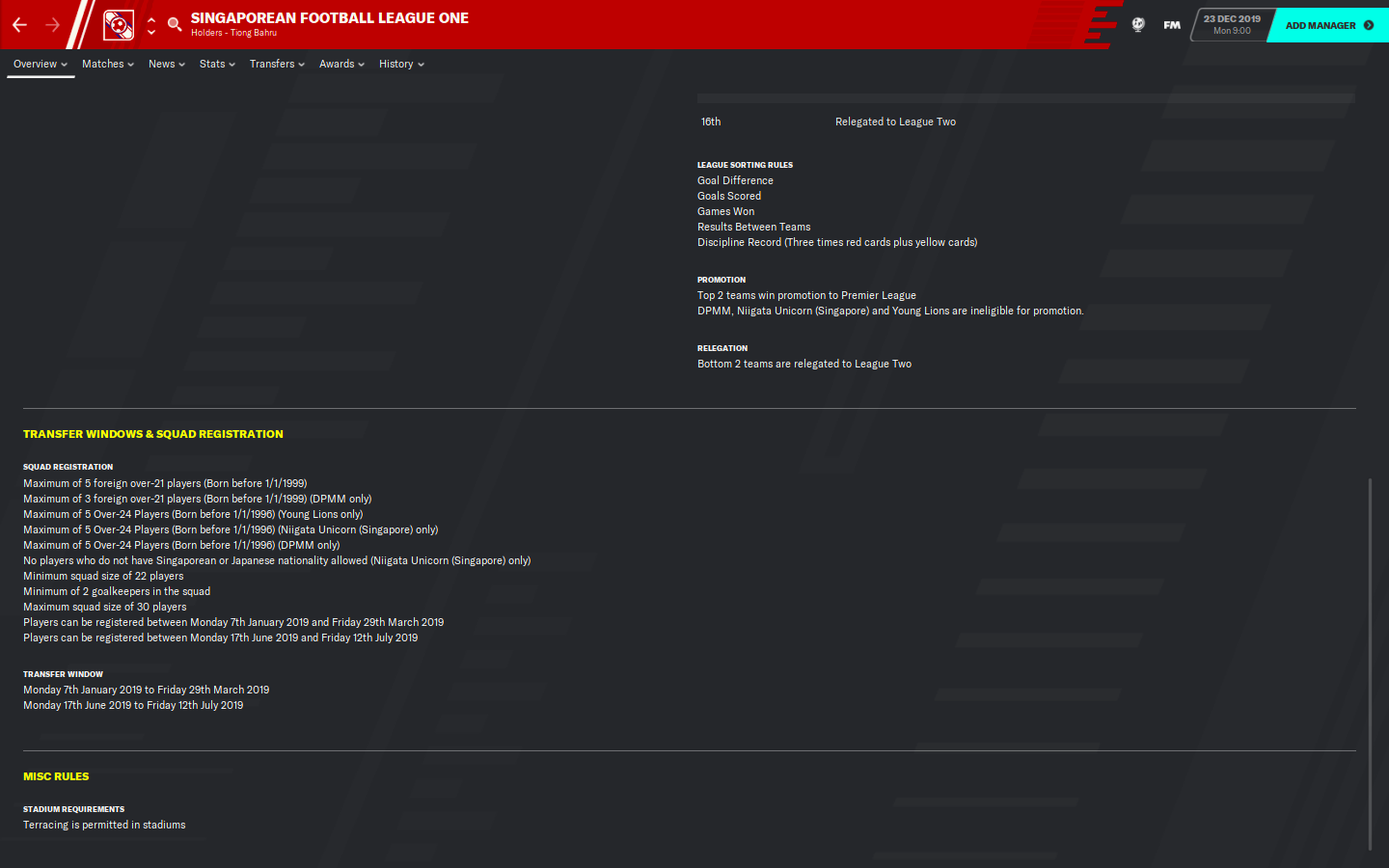 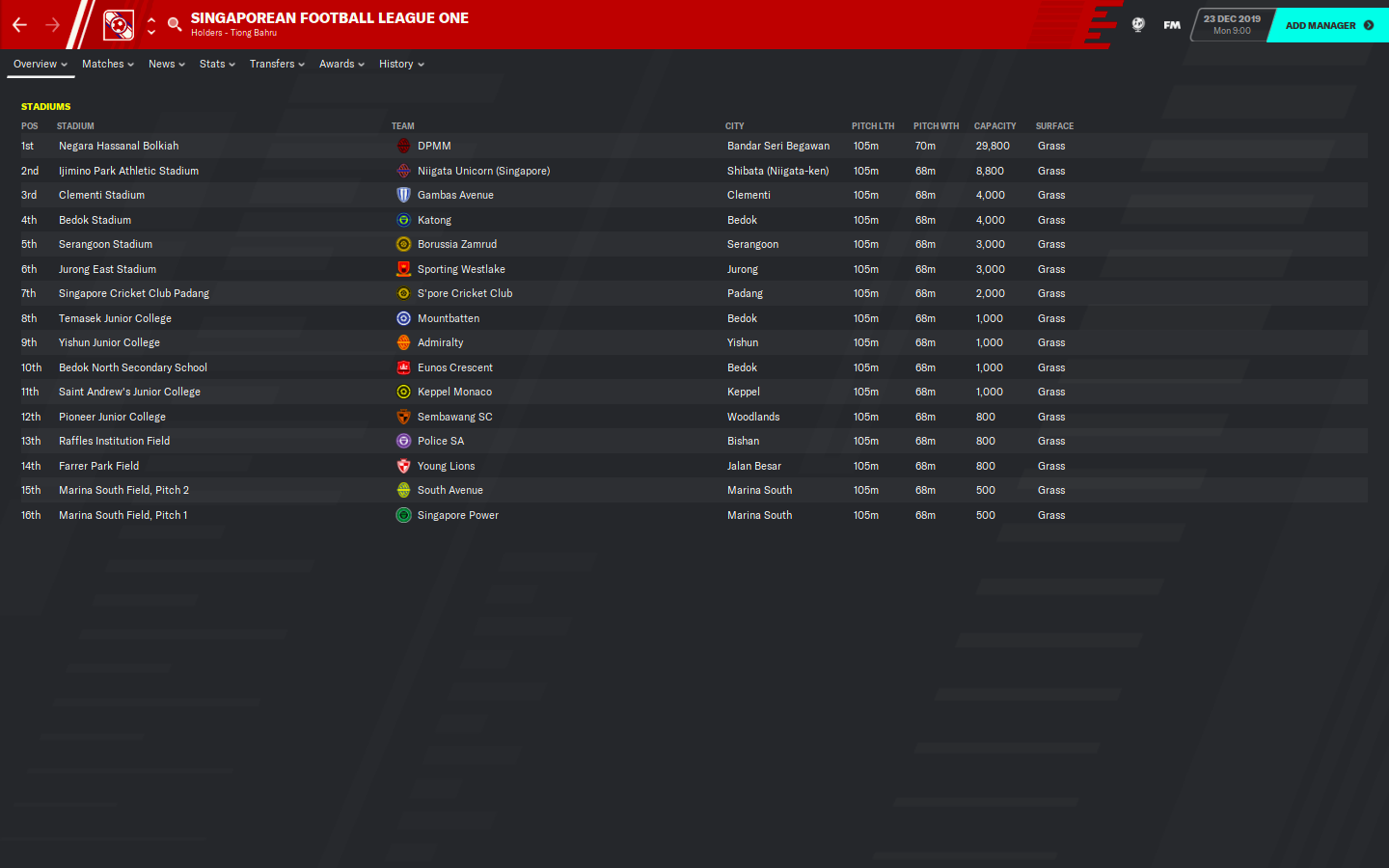 Oh yes, if you've noticed, I've sent Albirex Niigata (S) home to play in a much better stadium than their current assigned Jurong East Stadium. It is cooler to play against a Japanese team in Japan, just like how we play DPMM in Brunei. Sadly, in the real world, this makes absolutely no sense because Japan is rather far away by flight. Thank God for fake databases I guess.

Not much to comment about here, other than good luck, have fun, if you begin from the bottom. 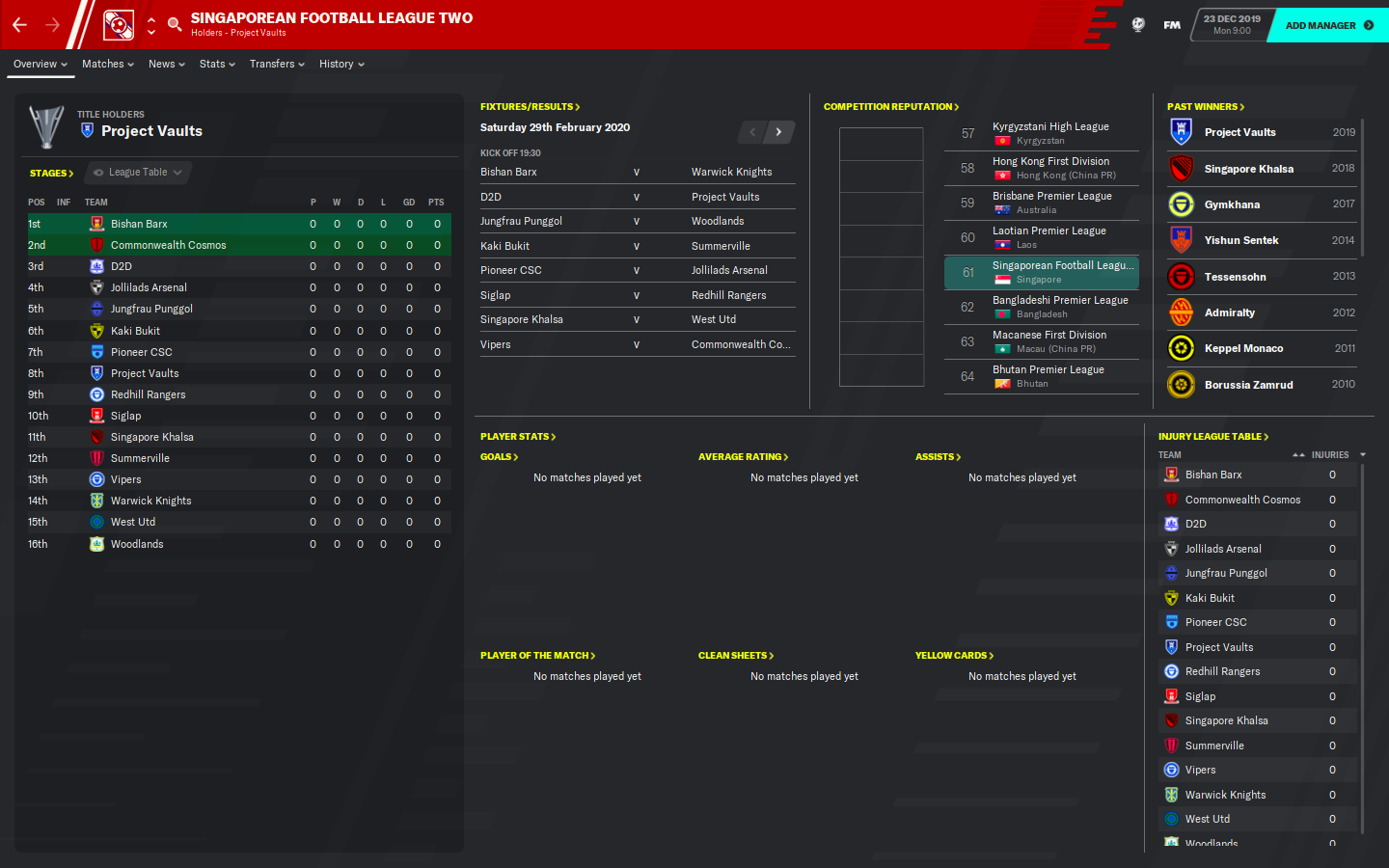 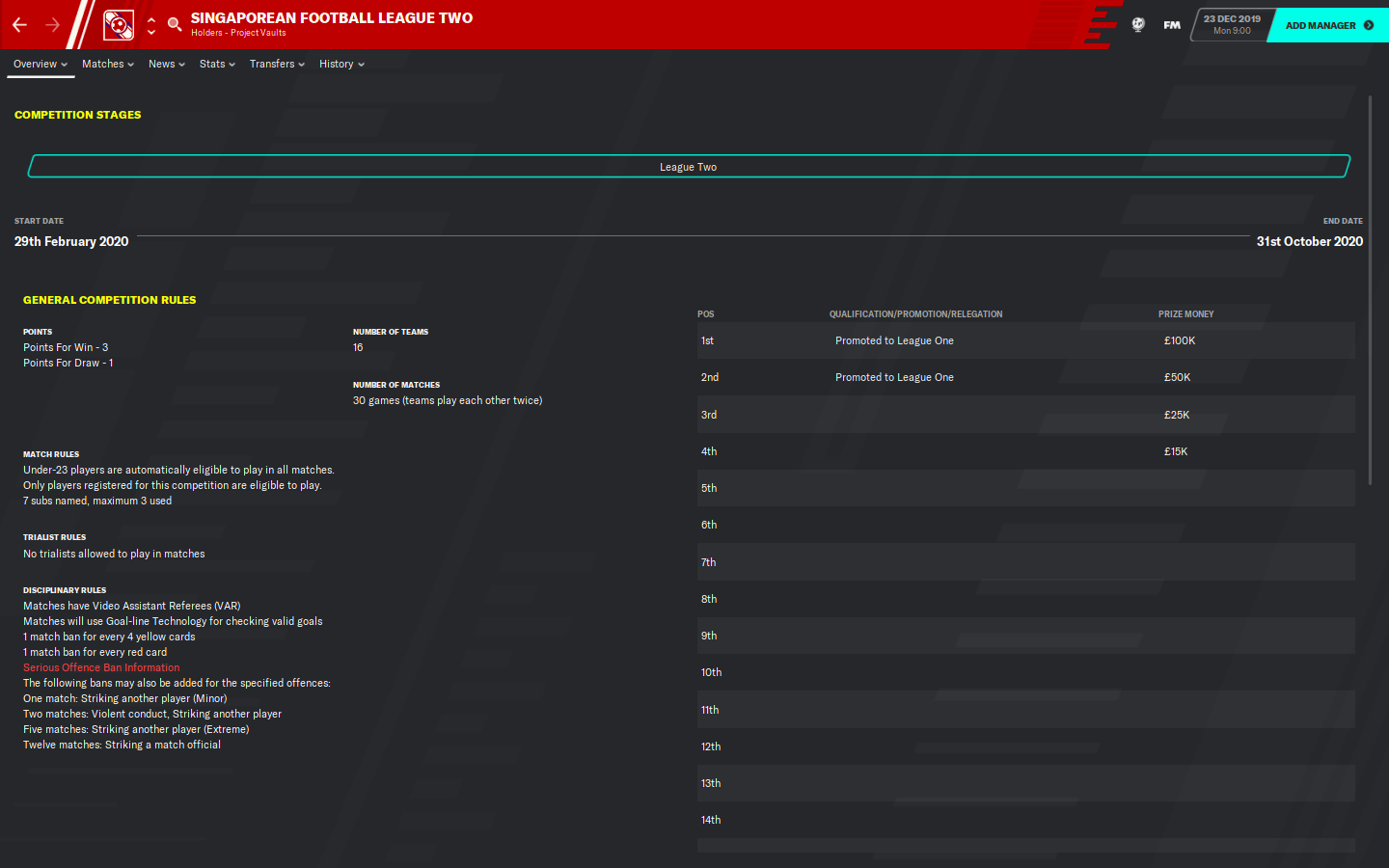 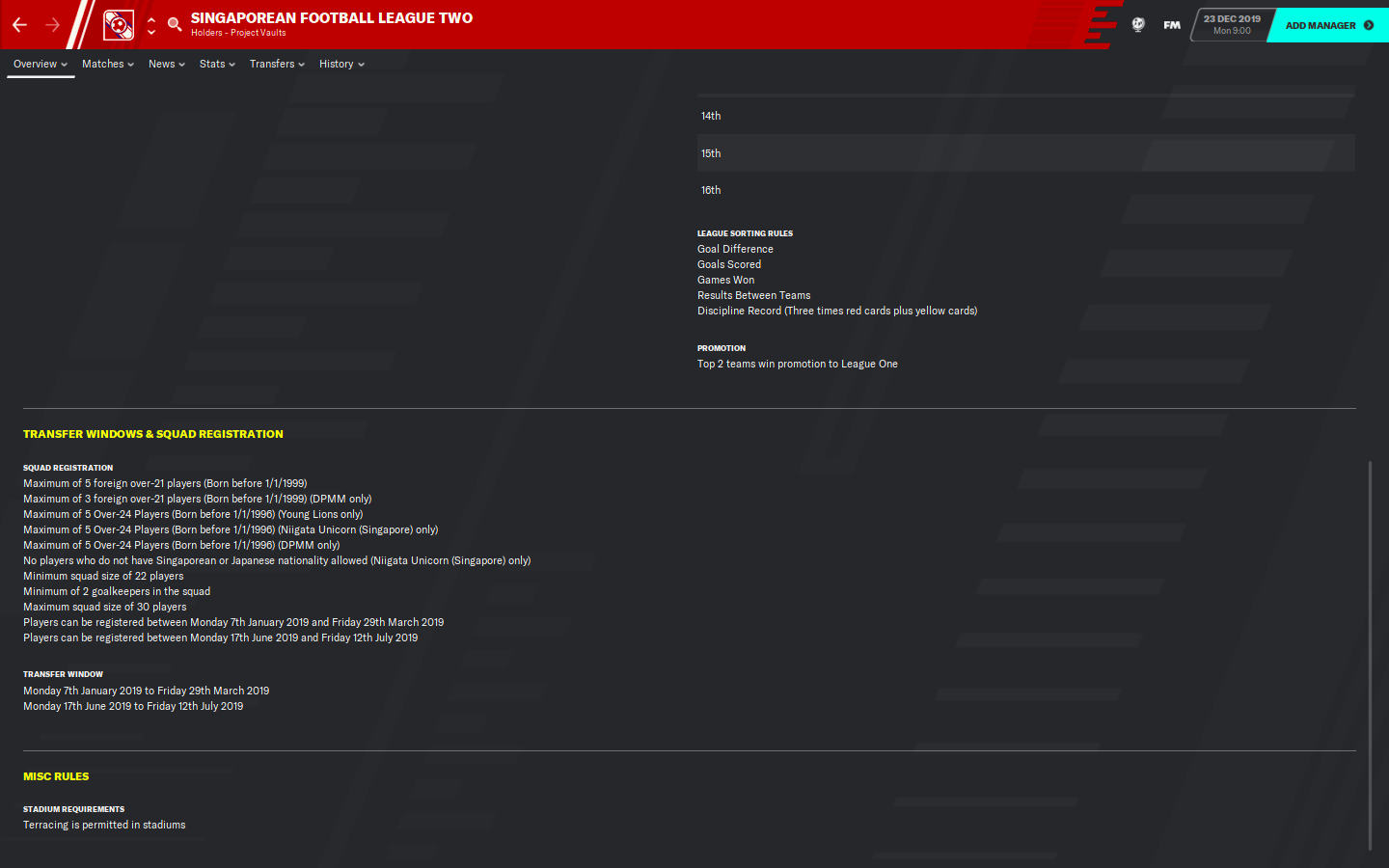 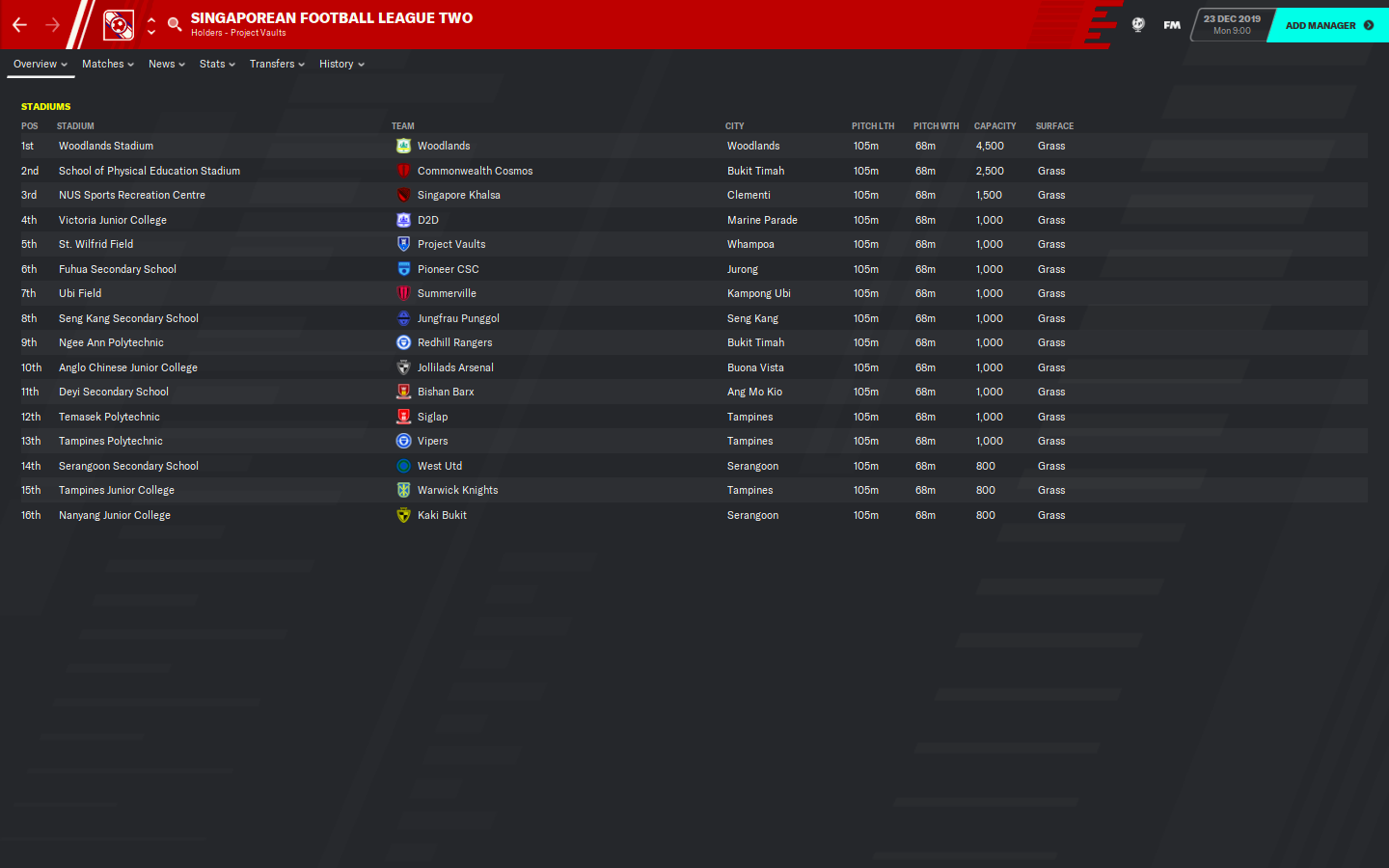 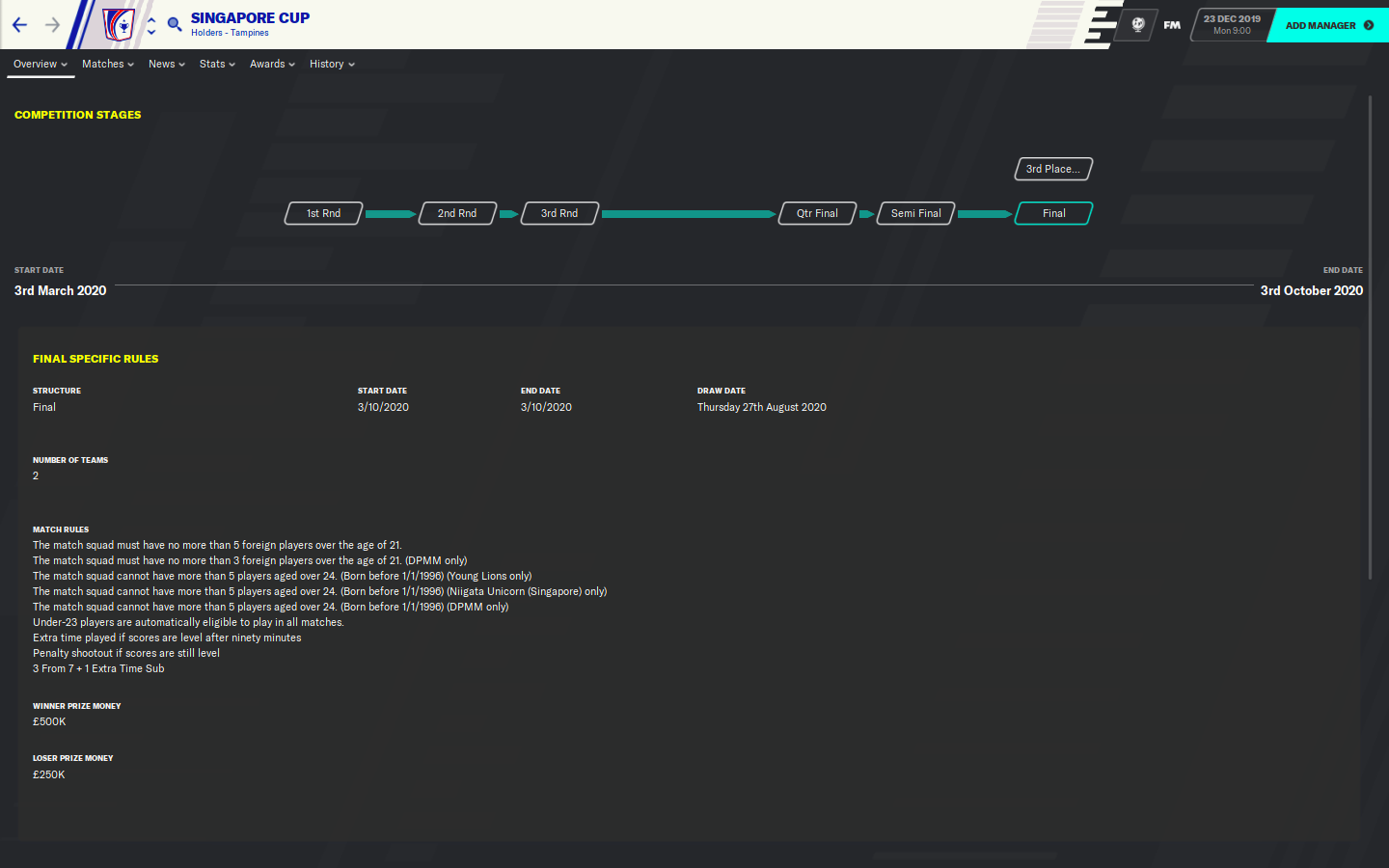 Oh yes, the Singaporean League Cup is removed. Just one cup will do, thank you. 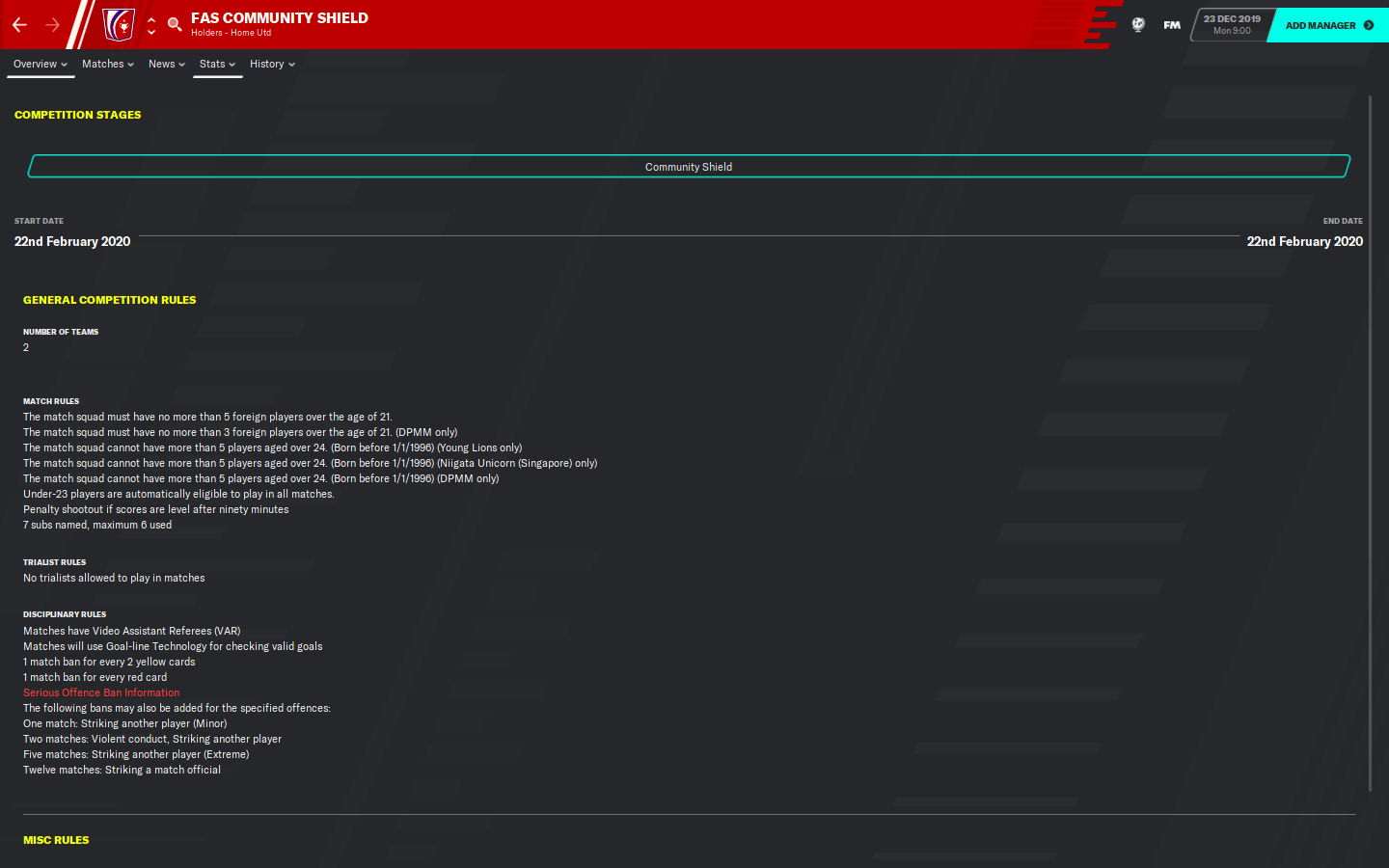 As mentioned in the Introduction, the completely ineffective U19 teams were just triggering; therefore I have revamped the reserve leagues and all teams will have a U23 team playing in the U23 version of their domestic leagues. Reserve Leagues play on Monday, with the sub-rules being 6 from 9 (if I remember correctly). 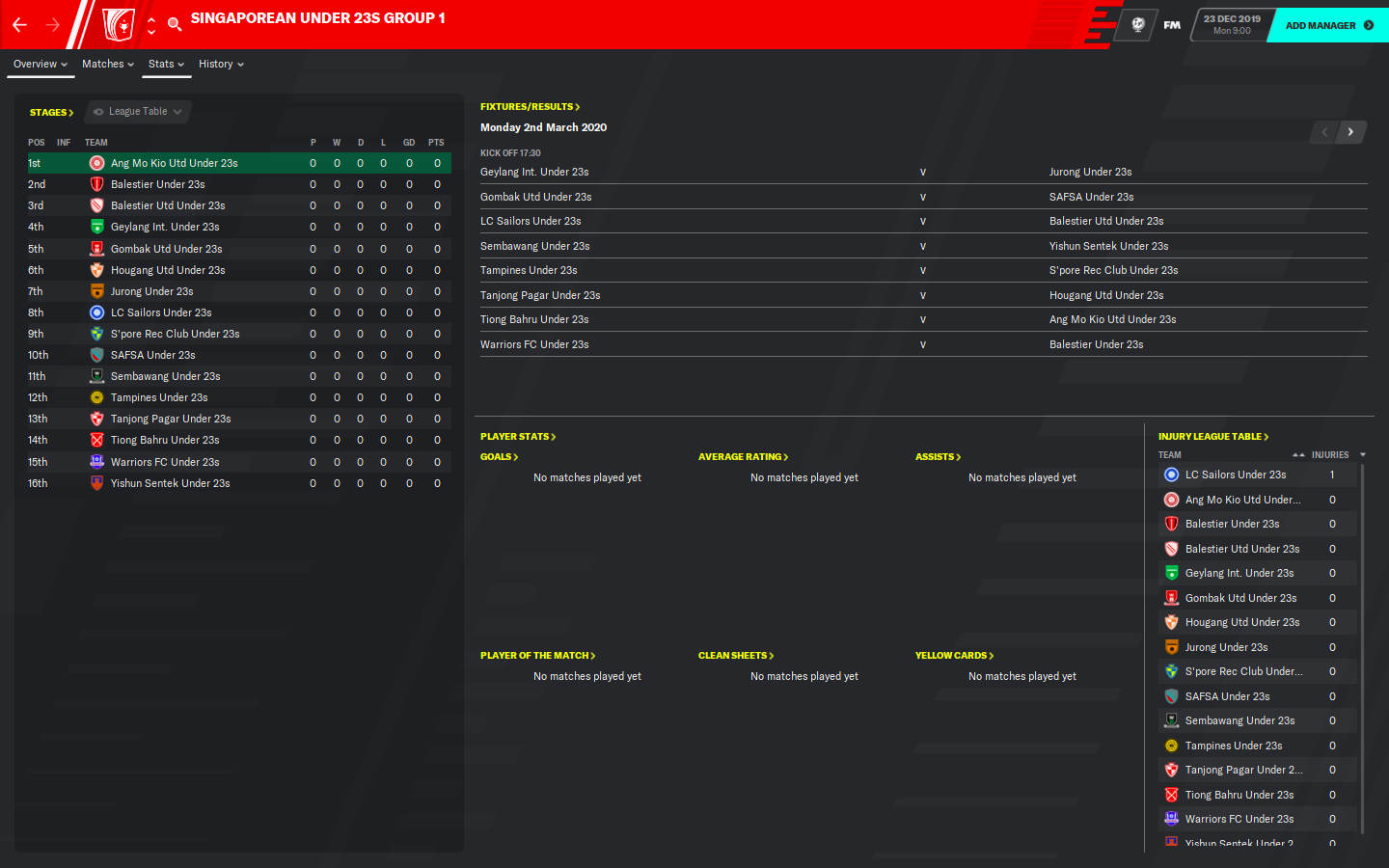 Tampines Rovers - What has changed? 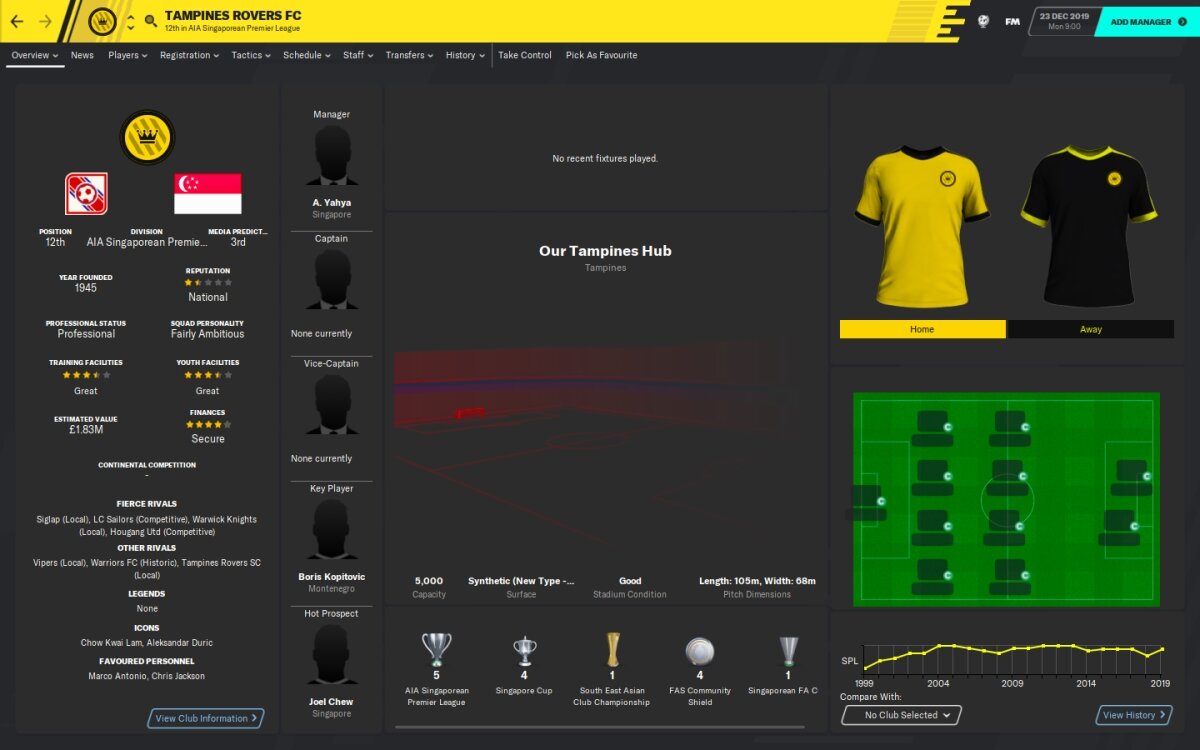 Of course, when I bring up an example, I'm going to use the team I used most - Tampines Rovers. If you haven't noticed, I have added some rivalries based on the location of the teams, and some teams which previously have had no locations now have new locations. This is just to spice up the news media for a bit; otherwise, games get a little boring with no media buildup. Training and Youth facilities also received a boost, although this will be different for different clubs, with the higher reputed clubs received more of a boost as compared to the lower ones (just like in real life). Oh yes, the nationality rule. If you didn't read above, it is now accumulative, for 2 years, instead of continuous for 4 years. For example: 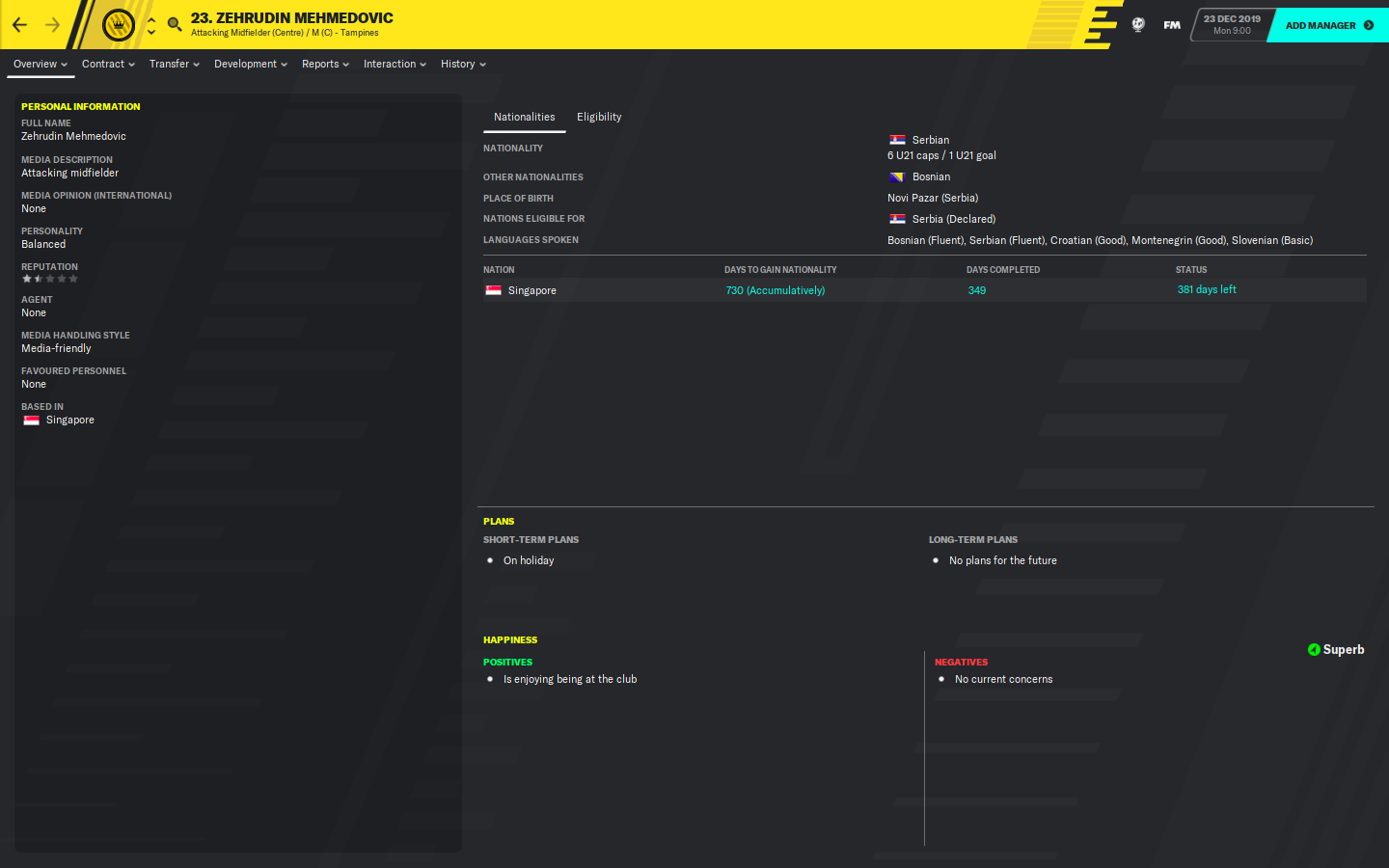 Final Notes
For a first post, there's probably a bunch of things I missed out, so please note in the comments below, and I will add it to the changelog and the main article accordingly! If anyone is interested in the edited ACL/ACC file with dynamic qualification, also drop your comments below, and I will upload it when I have the time to do so. (Spoiler: That file also includes the ASEAN Club Championship) If nothing else, God bless, and enjoy your time with this file