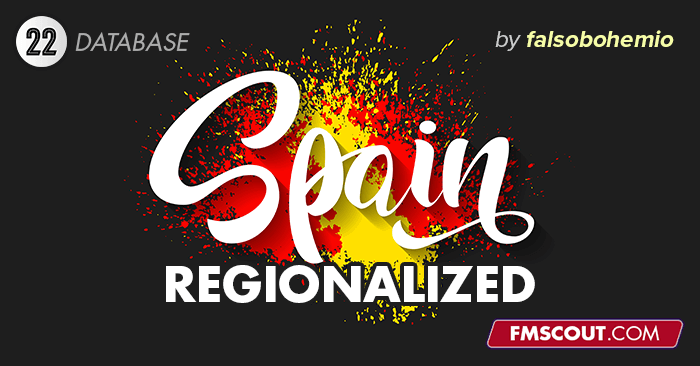 Hello everybody, how are you? In this case I want to present you a new database. Spain with its more than 1100 teams, regionalized to the extreme in 7 divisions.

The first division is 20 teams, two rounds, 38 games, with 3 relegations, just like in real life.

Liga 2 has 22 teams, two rounds, 42 games, with 5 relegations to the Primera RFEF, unlike today.

The third division of Spanish soccer is the Primera RFEF, I took out the original groups and now there are two divided into North and South, by latitude, very simple and something else. There are 40 teams, where two are promoted to the Second Division plus the fifth promotion that comes out of the play-offs. The B teams can not be promoted, in Segunda is only the subsidiary of Real Sociedad, once they are relegated from the second division they will never be able to return.

The fifth division is the third RFEF. It is divided into 9 groups, where each one has its own promotion and game systems, obviously. These groups are: Group 1 (Galicia, Cantabria and Asturias), Group 2 (Euskadi and Navarra), Group 3 (La Rioja and Aragon), Group 4 (Catalonia), Group 5 (Canary Islands and Balearic Islands), Group 6 (Valencia and Murcia), Group 7 (Andalusia and Ceuta and Melilla), Group 8 (Extremadura and Castilla y León) and Group 9 (Castilla la Mancha and Madrid).

The sixth division is the Primera División Autonomica, the first division of each of the autonomous communities. Each one has different ways of playing, and different formats. For many regions it is also the last division. The case of Andalusia has a single division at the autonomous community level and Ceuta and Melilla are unified in a single division. At the same time, many missing teams have been brought back to life, which are taken as other teams and allow to create new stories and redemptions from the mud, as well as teams that are purely made up of juniors have been put into the senior structure.

The seventh and last division is the Segunda Autonómica, it is only in some autonomous communities. For example, Canarias, Cataluña, Euskadi, Castilla y León and Murcia are the ones that directly have a second autonomic division. A possible mistake is that the B team and the main team in these very low divisions are in the same division, however there is no problem with this and it works well.


The Copa del Rey is played by all the teams of the Third RFEF and upwards, always playing at the home of the lower division team. From the round of 16 onwards there are capacity requirements to be local in their fields. The final is on neutral territory.

The Supercopa de España is once again a round-robin game between the Spanish League champion and the Copa del Rey champion. Just like in the old days

I hope you like it and enjoy this new way of playing. Salute