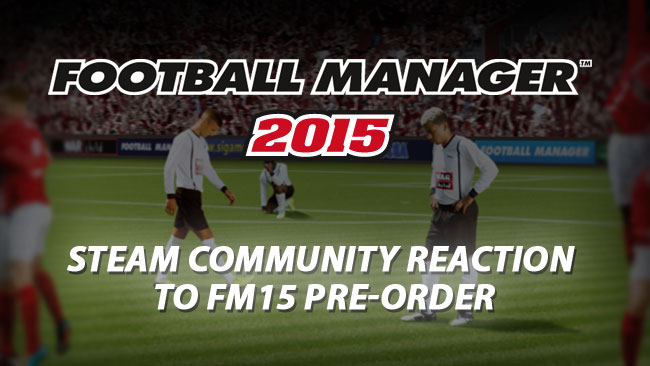 So far, we know very, very little about the latest installment in Sports Interactive's flagship series. In fact, just about all we can tell you is that we will know more about it soon, with feature announcements set for October before a confirmed release date of November. And, while it remains to be seen if SI will take a similar approach to last year by disclosing a small amount of features for each day in the month, the Football Manager community have already taken in their numbers to the Steam forums to voice their many discontents and, dare I say it, nitpicks, with previous versions of FM, many of which have been bugging the armchair managers among us for years and still remain unresolved.

We thought we'd take a look at what's been rustling your jimmies about FM in recent years, and so we've rounded up some of the best, most valid points:

Without doubt one of the most requested features of FM15 is an improved - or even a complete overhaul of the - match engine. The chances are, if you've played Football Manager 2014, you'll have several complaints about the ME. Whether it's attackers' failure to make the most of even the clearest of clear cut chances; defenders - in particular full backs - seemingly being incapable of dealing with onrushing attackers successfully; goalkeepers making far too many costly mistakes at every level or even in general your players' apparent oblivion to your tactical enforcements, it is highly likely that you have some form of complaint with FM's current match engine and would like to see it resolved sooner rather than later.

And, with few major changes having been implemented since the introduction of 3D Graphics to the series, it may be about time for Sports Interactive to head back to the drawing board and provide us with a better match engine.

It's Just the Same Game, Year after Year

Every autumn we hit that time of year again. EA Sports release the latest installment in the ever-criticised FIFA franchise. Call of Duty comes out to a roar of "it's just the same as the last one!"

Around that time many of us early birds start to get our heads stuck in to the brand new FM, preparing ourselves and our close friends and family for another year of 5:00a.m. bedtimes and four-figure playing times displayed in our Steam libraries. Much like the worldwide phenomenons of CoD and FIFA, there is a recurring, eerie cry of "Nothing's changed" around the community.

Now, let's be fair towards the developers here, with the exception of that spray how much really changes in the world of football each year that they have to react quickly to implement? But still, we feel a growing desire for a better game, after all we need something to truly justify the asking price, and, for a growing amount of people, that value for money just isn't there anymore.

For all we know, Sports Interactive may just have something huge up their sleeves, but, if the Steam forums are anything to go by, it's going to have to be pretty damn good to keep even the most loyal of customers coming back for more, year after year, before they start to lose patience with SI.

Lower League Management, or LLM, is a massive part of the experience for thousands of FMers, dissatisfied with winning the Premier League after two seasons and the Champions League after three. Currently, FM offers a career in England down to the sixth tier and down to the third level in most of Europe's other top nations. To some of you reading that may sound like more than enough to keep you interested until the next November each year, but, understandably, for others it just isn't.

So, many people have been calling for a more complete league system, in particular in England where taking an obscure team from the bottom to the top of the pyramid is so challenging yet oh so satisfying. Other countries could definitely do with a deeper experience too, although the sheer number of leagues per level in places like Spain and Italy could make it difficult for SI to actually implement this.

Nothing Justifies the Pre-Order Price

Whether you've previously pre-ordered a Football Manager game or not, you simply cannot avoid being tempted into pre-purchasing the latest installment every calendar year. At £34.99 currently on Steam in the UK, and $49.99 in the US, you'd think they'd have to come up with something very exclusive to justify the asking price.

However, large parts of the Steam forums are littered with angry players, citing the total lack of screenshots and the aforementioned lack of information we have to bring to you currently. Of course, nobody is under any obligation to pre-purchase FM15 if they don't want to, but even the slightest of glimpses can be enough to tempt you in after all those hundreds of hours you put into last year's game.

There is of course the pre-order bonus of having access to the Beta version of the game, and while that may seem appealing enough to merit pre-purchasing the game for some, the endless list of bugs in early versions of the game will certainly put off others. Adding extra pre-order "bonuses" is honestly not something I can see Sports Interactive doing any time soon, but it would certainly make the initial asking price far more justifiable should they choose to do so in the future.

Where did Sliders Go?

One of the most significant changes that happened in the transition between FM13 and FM14 was the removal of sliders, promoting team instructions to the best way to make your players behave how you'd like them to. For some people, this was a good thing - it made it that little bit easier to create a tactic without the added pressure of perfecting every last aspect with sliders. For others, including myself, this was an abomination. We enjoyed tweaking the width and tempo of our styles to perfection, until we had it exactly how it wanted. We liked being able to time waste to our hearts' content, or to adopt a more admirable method of seeing out a result with our opponents breathing down our necks at 1-0.

So, regardless of whether you agree with the decision to remove sliders or not, there are certainly many questions that remain unanswered. Why change something that the majority of fans like, something that seemingly works faultlessly? Why not at least give us the option to add or remove sliders from the game depending on our personal preferences?

We'll have to wait a couple more months yet to find out if sliders will indeed be making a return, but if one thing remains for sure, it's that team instructions will not be going anywhere.

Those are just a few of the main issues we see consistently popping up in the Steam forums and on other sites, but we're sure you have views of your own. Will you be pre-purchasing FM15? Do you have any issues with the match engine in its current state? Would you like to see sliders return after a one year hiatus? Are there any other burning issues you have with FM currently that you'd like to see resolved? Be sure to share them with us, we're really keen to know just how you feel about FM15 with just three months to go until release day.

Now, this is a story all about how
My life got flipped-turned upside down
And I'd like to take a minute
Just sit right there
I'll tell you how I became the prince of a town called FM Scout