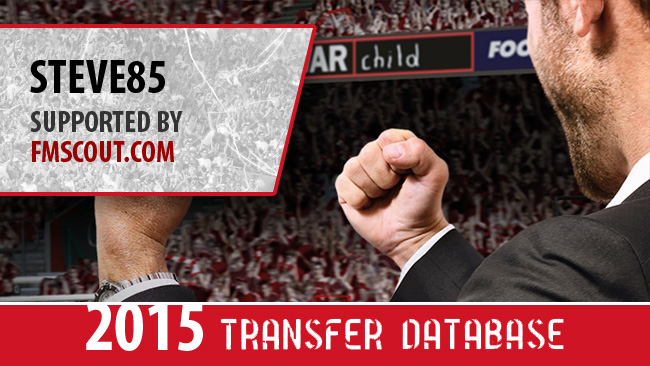 Hello everyone, it's good to be back with my databases.

Last year my FM14 database was downloaded a total of 170,000 times and for that I like to thank you all, especially fmscout.com for supporting my work since the very beginning and making it known to the Football Manager community.

This year I'm hoping to be bigger and better. As always I will be working around the world with player transfers, managers, coaches, etc.

There are 84,470 changes to the database as of 6th October, 2015, including 933 non-league transfers and managers in England and Scotland.

You will not find a database around that covers every playable and non playable leagues in the FM community.


And once again I will be working on non-league changes in England, Scotland and a host of other countries.
Sadly I had to remove level 11/12 for minor bugs. Hopefully sort the bugs out and return level 11/12

Hope you enjoy my database.

Stats for 23 players have been changed:

More player stats will be changed during the season.

Step 1
Copy or Move the downloaded .fmf file to the following location:
Create the "editor data" folder if it doesn't exist.

Hey all, I'm Steve. I run my own FM page on Facebook and I create databases for FM.

89 comments have been posted so far.