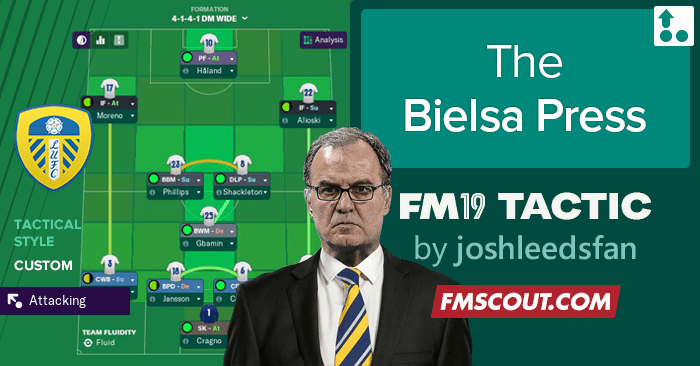 When Leeds United announced the arrival of Marcelo Bielsa in the summer, it was arguably the Championship's highest profile appointment at least this year, perhaps rivalled only by Frank Lampard (of Frank Lampard's Derby County). For a man with so few actual trophies, Bielsa is revered the football world over, looked up to by the likes of Pep Guardiola, Mauricio Pochettino and Diego Simeone.

Much was made of his trademark tactical style of hunting in packs, retaining possession and creating overloads in wide positions. Firstly because of the high intensity and its use in the Championship. The season is 46 games long, therefore there were question marks over whether such intensity could be sustained over such a long season. Secondly, there were questions around whether his style on the ball could be implemented in the Championship, a division where technical ability isn't as abundant as leagues he has worked in previously, particularly in a team who'd had a worse second half to the season than bottom side Sunderland.

So far however, 'Bielsaball' has been a roaring success. Even teams that have mostly neutralised various threats have eventually succumbed to the intensity of the setup. Inspired by this success, I attempted to replicate this tactic on Football Manager. Key traits have been replicated (i.e. high pressing possession football), however some minute details have been tweaked. This has been either due to the limited technical ability given to my players in the game or just because there are details that someone vastly more qualified in football coaching than myself would interpret better.

Having started unemployed before taking up a job at Bristol City, I initially went with a different tactic which although successful in getting us promoted, caused a few minor frustrations. After a fall-out with the players, I left at the end of the season. As fate would have it, Marcelo Bielsa took my old job so I was more than keen to take his at Leeds.

With most players still there, I made a few additions of my own. The signings were largely hit and miss but the team in general was successful. After being on the wrong end of a 2-1 comeback at home to Blackburn on the opening day, I feared the worst. We would go on a 4-month unbeaten run- winning every game in September and October- and go into Christmas top of the table. We had a second-half wobble similar to the one at Bristol the season before, but once again, our start was good enough to ensure we went up as runners-up.

The first season in the Premier League would turn out to be opposite to my previous two seasons in terms of form, struggling initally, but making it safely in mid-table by December. An outstanding run of 4 months unbeaten in the league- including a win away at runaway leaders Liverpool and a stunning 2-1 comeback away at Chelsea- rocketed us up the league. We held 5th spot for some time, although a drop in the last three games would see us finish in 6th. Luckily Chelsea- who had already qualified for the Champions League- won the FA Cup, ensuring we would qualify for the Europa League in our first season back in the top flight.

I can hear you all screaming "enough of that, get on with the tactic!". Fear no more, I will now delve into the tactic.

Much to my joy, Football Manager 2019 comes with preset tactics that you can use as a base to create a masterpiece. The Gegenpress formed the basis of mine, as the most important aspect of my tactic is relentless pressing. The rest of the tactic was tweaked to allow for possession and- this is where we deviate from the patient buildup seen in Bielsa's style- a high tempo. This tactic also thrives off high balls into the box, connecting new-age hipster-friendly Bielsaball seamlessly with the old-fashioned English intuition of getting crosses in for the striker.

Despite doing away with a patient buildup, there is still a lot of trust placed on the ball skills of the defenders, with a 'play out of defence' removing the inclination to continuously lump it long. Full backs are usually set as complete wing-backs, usually being key in transition phases. I've had a lot of joy with Barry Douglas down the left (not least because of his incredible delivery on set-pieces) and Max Aarons down the right (signed from Norwich for £8m in summer 2019, winner of the 2020 Championship Young Player of the Year Award). We'll now go into the roles:

Goalkeeper- Sweeper Keeper (Attack): With all the team pressed so high up the pitch, you need a goalkeeper who is confident in coming off his line and in his distribution. Ability to pick a pass can be crucial, as many of my goals from more patient moves have started with an intelligent pick-out from the keeper. Bailey Peacock-Farrell did a pretty good job of this although Alessio Cragno (signed from Watford in 2021) has also impressed this season.

Full backs- Complete Wing Back (Support): A high level of fitness and/or a quality back-up is strongly recommended. Although most people may think of the engine room being in the middle of the pitch, there is an argument to be had that this role is carried out competently on the flanks by the full backs. Pace is desired but not essential (Barry Douglas is still putting in world-beating performances at 32 years of age with limited pace). Crosses and positional awareness however, are absolutely essential. These traits have equipped Aarons and Douglas with the ability to both supplement the attack and quickly come to the defence's aid.

Centre back- Central Defender (Defend): A covering role in some ways without actually dropping deeper. As the tactic looks for quick wins off the ball (i.e. the offside trap), a defensive line has to be maintained (hence the defend role). Under normal circumstances, this player would be categorised as a no-nonsense centre back that just cleans up after his team mates. However, due to automatic insistence of FM to have NCBs hoof it clear at the first opportunity, this player is instead set as a CD so he can lay off short passes to more technically gifted players. Liam Cooper played this role, but has started to fall behind the required level of ability. Luckily, Nikola Katic (signed from Rangers in 2020) has been a revelation in his place.

Centre back- Ball Playing Defender (Defend): Not a stopper, so he won't be foolishly breaking lines. This player must still have an aggressive streak as he is usually the first line of defence out of the back four. He essentially plays a similar role to the keeper, except he obviously can't use his hands and has to maintain the defensive line. A good eye for a long pass can be beneficial. I've had many goals where a hole in the opposition defence has been picked out from our end and the striker has peeled off the defender. I've had considerable joy with Pontus Jansson in this role.

Defensive midfielder- Ball Winning Midfielder (Defend): I cannot stress enough how important it is that your BWM is set to defend. I had trouble on many occasions when I set my BWM to support. Whilst pressing high up the pitch was all good and well, we were constantly being exposed as the opposition sought to expose the space between our lines. Since setting my BWM to defend, the player has played a crucial role in the ball-winning department (whodda thunk it eh?). Particularly impressive for me in this role has been Andre-Franck Zambo Anguissa (signed/gambled on from Fulham in 2020).

Centre midfielder- Deep Lying Playmaker (Support): The beating heart of the team and absolutely crucial to the possession side of the game. The DLP is set to support so that as well as helping to win back possession in the middle, I have someone lurking outside the box to get the ball moving back into the box if ever it comes back out. This player is essentially a sheep dog on the attack, penning in the opposition defence and limiting their opportunities to break out. An absolutely outstanding player in this role for me has been Jamie Shackleton, recipient of greatest injustice of the 21st century when he was denied the Premier League Young Player of the Year Award in 2021.

Centre midfielder- Box-to-Box Midfielder/Carrilero (Support): The role this player plays depends on what you have at your disposal. It really doesn't ake a great difference which role you go with here. The idea is that this player performs the jack-of-all-trades role in the middle without assuming the anonymity of a regular Central Midfielder. Without being outstanding, Pedrinho (signed from GD Chaves in 2020) and Kalvin Phillips have been very effective players n this role.

Wide attackers- Inside Forward (one support, one attack): In your best attacking performances, these two players will be key in the final third (I appreciate that goes without saying). One supports because if they both support, the lone striker becomes particularly lonely. One attacks because if they both attack, the attacking channels get congested whilst the midfield and full backs become exposed. I've had a lot of joy with Adnan Januzaj cutting in from the right this season, although in 2019/20, Tomasz Kupisz (signed by Bielsa from Ascoli in 2019) became a surprise package and finished the season on 17 goals and 10 assists at the age of 29.

Striker- Pressing Forward (Attack): I was once told as a youngster that the best teams defend from the front, and my teams are no different. This player will hassle the opposing defenders and become an out-and-out striker whilst in possession. He's a playmaking streak away from being a Complete Forward, the PF will be the top scorer in your team. A stand out performer for me has been Benik Afobe, who I signed for £17m from Stoke in 2020. I would now challenge to a duel anyone who argues he isn't a Premier League striker, as I have got 33 goals in 50 appearances out of him.

I've been playing FM since 03/04 with the only exception being 05/06 (and FM09 if FMH for PSP doesn't count). You'll probably know me for my countless stories with Leeds United, although I do occasional stories on other teams.

Therefore, as you can probably tell, I've been a Leeds fan all my life (before anyone accuses me of glory hunting 10 years from now) and are often my team of choice on FM.

Discussion: Learning from the best: The Bielsa Press FM19