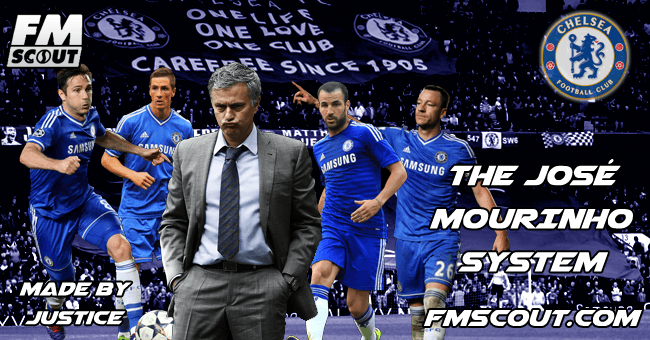 José Mourinho, 'The Special One', is possibly the most controversial managers of the twenty-first century, if not eternity. His antics on the pitch (where he usually ends up when unhappy with a refereeing decision), comments to the press and relationships with other managers often come under extreme amounts of scrutiny. And then there is his football philosophy. There are many critics of Mourinho's 'park the bus' system which he likes to utilise in games where his side would never ordinarily be able to match their opposition in possession play. His philosophy is considered to be ugly, unattractive and inhuman. However, it almost always earns valuable results when needed. His defence is organised and sturdy while his attack give the opposition no respite and usually finds a way through to goal. his system is not intended to capture the imagination 'tiki-taka' lovers; it's only objective is to obtain results.

This is my second system released, after my Brendan Rodgers System, which comes in to great contrast with this one. Before you download this tactic expecting to win every single game, please note that This tactic is not an instant result-winning tactic, as those tactics well and truly do not exist, no matter what anybody says to you about a tactic. Games are won by the players who play on the pitch, not the tactic on the paper. If somebody tells you otherwise, he is lying. This is José Mourinho's style of football. Your team will try to emulate his philosophies, using this tactic. It is a style of play which is very unique, and it will help your team to play effective, opposition-frustrating football. 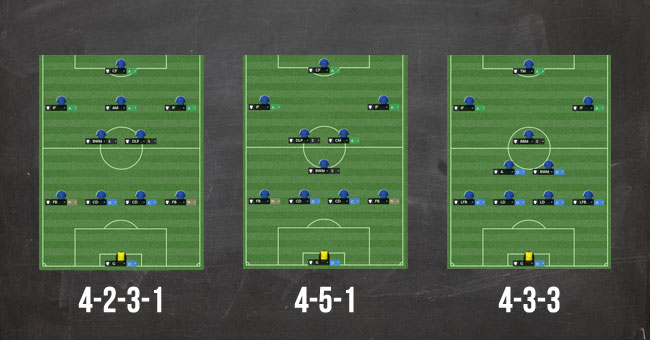 "Three tactics, this can't be the same system!?!?" - what some of you may be thinking. Well the thing is, they are all the same system. Not many managers use just one formation at all times and these are the three which Mourinho uses the most. The 4-2-3-1 and 4-5-1 have identical Philosophies and Strategies, with only the formation differing. The 4-3-3 is the 'bus' tactic which Mourinho used so successfully against the likes of Liverpool and Manchester City last season, where they claimed four wins from a possible four.

4-2-3-1: This is Mourinho's most used set-up. It makes use of a flat back-four with two central midfields in front of them. The two wide players will come inside looking for goals while the attacking midfielder sits just behind the lone striker. Creating chances is the aim of the game here as Mourinho looks for as big a win as possible with this set-up.

4-5-1: This set-up is very similar to the last. The only difference is that there is a defensive midfielder in the place of an attacking one. The player roles have been switched around slightly in midfield and the objective of this set-up is to make sure the midfield battle is won by your side.

4-3-3: Finally, the "Park The Bus" tactic used by José Mourinho. A very flat back-four protected by a deep midfield triangle ensures defensive security while the front three are rather isolated in attack. Mourinho uses this to grind out results in situations where Chelsea look, by far, the second-best team. A sound defensive combined by an effective attack makes this a formidable set-up. 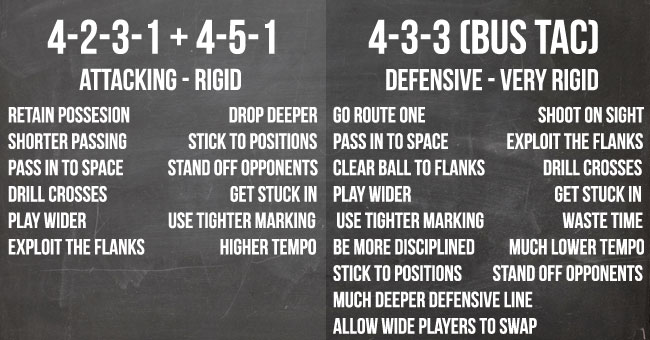 These are the team instructions, these are the settings which defines how your team plays it's football. This is where you create your style of football, where your master plan for success comes together. The Team Instructions are the exact same for the 4-5-1 and the 4-2-3-1, while the 4-3-3 (Bus) has different instructions. These instructions are set in a very specific way and are not really meant to be tampered with, as these define Mourinho's system.

Philosophy: This is how your team acts through each phase of the game. Mourinho likes his defence and attack to be quite separate from each other, so the 4-5-1 and 4-2-3-1 are set to rigid. The defence and attack are even more separate when he 'Parks The Bus', so it is set to Very Rigid there. This means that defenders won't attack much and attackers won't defend much, which helps keep the overall shape of the team.

Strategy: This is how you take on your opponent. The 4-5-1 & 4-2-3-1 are both set to Attacking. Mourinho usually likes to make his team look for many goals as his attackers are world-class (Hazard, Costa, etc). The 4-3-3 is set to Defensive in order to hold the fort and ensure that no goal-chances are conceded to the opposition, while using quick counter attacks to penetrate the hopefully-scarce defence.

Passing Style + Tempo: This is how you pass the ball and how quickly you play your football. The 4-2-3-1 and 4-5-1 uses a Higher Tempo in order to give the opposition no respite and to move the ball around very quickly. These two formations also look to use Shorter Passing and In To Space in order to Retain Possession of the ball while moving in to gaps left by the opposition. The 4-3-3 uses a Lower Tempo in order to slow down the play and kill time. Combined with Route One passing In To Space, a lot of time is wasted as the ball is Cleared To Flanks as often as possible.

Attacking Play: This is how your team attacks the opposition, to state the obvious. In the 4-2-3-1 and 4-5-1, your defensive line will look to stay Deep in order to cancel out any quick counter attacks through pacey attackers. Your team will look to play Wider football and Exploit The Flanks, Drilling Crosses in to the box for the striker and other attackers. Mourinho loves his wide play, especially at Chelsea where his biggest threats are on the wing. In the 4-3-3 (Bus), your defensive line will stay Much Deeper than usual. Wide Play is still used and your wide players will Swap Positions in order to evade marking. Your players, otherwise, will stick to positions to keep their shape.

Defensive Play: This is how your team defends against opposition attacks, sorry for stating the obvious again! In the 4-2-3-1 and 4-5-1, your defenders will mark tightly while not committing to tackle an opponent too quickly. However, when they do commit to a challenge, they make sure their opponent feels it through very hard tackling. In the 4-3-3, your defenders will also mark tightly while not committing but will also take very good care not to foul an opposing player when they challenge for the ball. 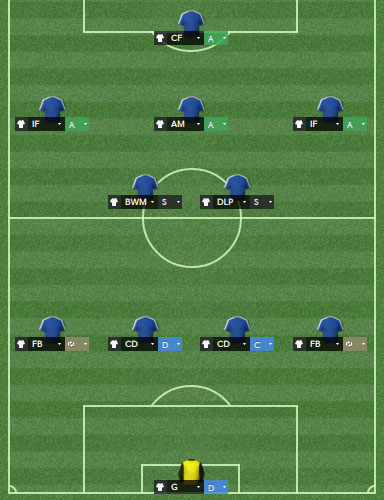 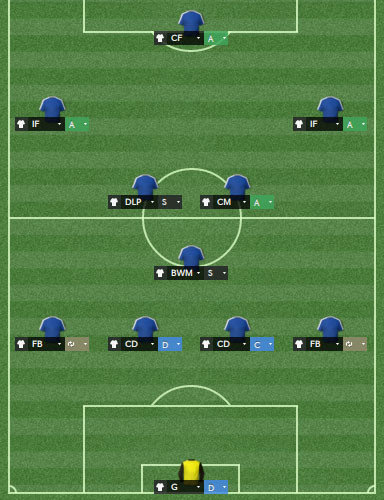 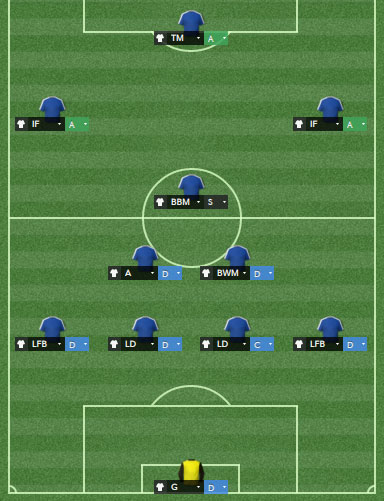 This is a typical defensive play using the 'bus' tactic, showing you how your defence will set up to nullify your opposition's attacks.

The Back Four: As you can see, the back four are playing very deep and standing off the opponents in order to keep their shape and not allow the opposition to find a gap to run in to. The only gap which is visible is between the left back and the other defenders. However, this is because he is marking a winger and if an opposition player were to look to run in to that gap, the Anchor Man would slot in there.

The Midfield Triangle: As you can see, the Ball Winning Midfielder is closing down the ball. The Anchor Man is sitting deep marking the attacker while the Box To Box Midfielder is ready to move around the pitch when required, while keeping an eye on number eight (he doesn't need to close down a player when somebody is already doing so). The three midfielders will do the exact same throughout the entire game.

The Attacking Trio: These leaves the two Inside Forwards and the Target Man. They won't do much defending as they are not required to do so and their only role is to take the ball up the pitch and look to fashion chances between them.

you do decide to use this system, please take note that it may take several months for your team to become fully accustomed to this tactic, even if the familiarity bar is full. If your results at the start of the season are poor, this is not the tactic's fault. It is just that your players need to have more experience in this system in competitive matches. My recommended training approach would be on Defending or Fitness, to get your team to be as able to nullify attacks as possible, as you will be looking to do so every game. For match preparation, you can work on either attacking or defending set pieces, which is the norm for any team. If you are looking to train players for this system, train them in the roles which are included, so that they become familiar with them. Just remember, if you are patient with this system or any other system, it can succeed for you.

The 'Tactic' menu, located to the top right of the right panel, allows you to save and load different tactics. To Import or Export a particular tactic, select the 'Manage Tactics' option, which will display a dialog box. 'Import' will prompt you to select a tactic (.tac file) to import into the game, whilst 'Export' will prompt you to save it to a directory. The 'Delete', 'Copy', and 'Rename' options allow you further control over your physical tactics files.

I highly recommend this system to those looking to play a style of football which is defensive but lethal in attack. Be warned, it may take a while for your team to get used to this system. Also, I cannot guarantee that this tactic will be the best possible tactic for you. A tactic's success depends on the players used in this tactic. This is just a different way of playing which will hopefully bring you success.I hope that you enjoy using this system and I hope you have success with it. Any criticisms you may have are welcome, I am always looking to learn where I can improve. Thank you!