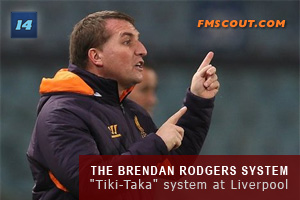 “I like to control games. I like to be responsible for our own destiny. If you are better than your opponent with the ball you have a 79 per cent chance of winning the game…for me it is quite logical. It does not matter how big or small you are, if you don’t have the ball you can’t score.” (Rodgers, 2012)


The Brendan Rodgers System has returned! It has plenty of changes to fully define this year's version and to bring it closer to how it is in real life. This tactic is not an instant result-winning tactic, as those tactics well and truly do not exist, no matter what anybody says to you about a tactic. Games are won by the players who play on the pitch, not the tactic on the paper. This is Brendan Rodgers' style of football. Your team will try to emulate his philosophies, using this tactic. It is a style of play which is very unique, and it will help your team to play dazzling, heavenly football.


Brendan Rodgers' philosophy is one that is admired across the globe. His beliefs of how the game should be played has lead to some revolutionary football in the Premier League, first with Swansea, and currently with Liverpool. He believes in getting all the little things right. Keeping the ball is very important, and off-the-ball movement is clearly visible in this system. Defensively, he likes his team to put a lot of pressure on the opposing team. If you put your opponent under pressure, they have less time and space to work with, which may force them in to making mistakes. When his team has the ball, his players play a nice, flowing passing game with the ball always moving, making it impossible for the opposition to predict the next move. They try to keep all the basics as simple as possible, but if his players have the ability to make something happen, they will use these abilities to express themselves on the game, while sticking to the fundamentals of Rodgers' philosophy, his way of life. 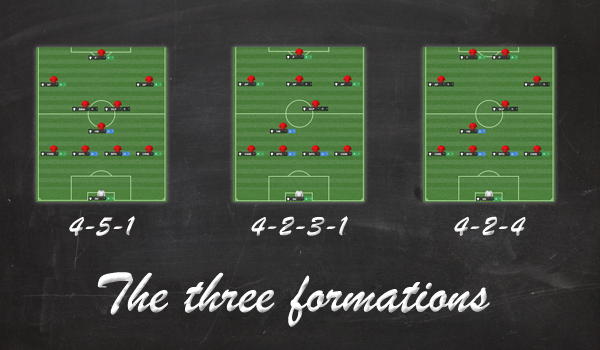 As you can see, there are three different formations. You must be wondering, "why are there three different tactics? Surely they can't all be the same system!" Well the thing is, they can. I see formations as how your team sets up for matches. Your system, your style, is defined by your Team Instructions, which will be discussed next.

4-5-1: Brendan Rodgers' big-game set-up. He uses this formation when he plays bigger teams such as Man Utd, Man City, etc. However, this formation is ideal if you want to completely dominate possession and not allow the opposition to get any of the bal. This formation's main strength is it's three-man midfield system. It is a very good set-up for games where you just want to keep the ball and stay solid.

4-2-3-1: This is BR's set-up for playing similar/weaker teams. It's main strength is the midfield triangle again, but this time it provides more attacking movement for when you are looking to put pressure on your opponents, or if you are looking to exploit a gap in the opponent's midfield.

4-2-4: This is BR's set-up for playing games where you just need to score goals. Having two strikers and two advanced wide players provides great attacking threat and is a nice tactic to use against table-strugglers, or if you really need to score a lot of goals. 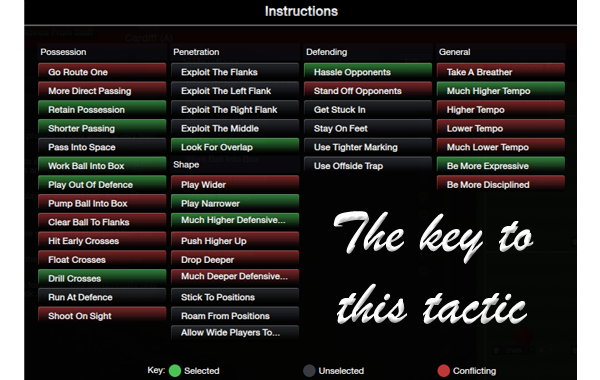 These are the team instructions, these are the settings which defines how your team plays it's football. This is where you create your style of football, where your master plan for success comes together. For each formation, these team instructions are the same. My belief is that you shouldn't play your style depending on who you play against, but how you set up (your formations). My opinion is that you should let your team play the football which they are used to and don't change it around (team instructions).

Philosophy: This is how your team acts through each phase of the game. You cannot see this in the screenshot above, but the Philosophy is set to Very Fluid. With a very fluid style, your attackers will help defend and your defenders will help attack. This helps with passing options, causing problems in your opposition's defence, and you have more players defending when needed too.

Strategy: This is how you take on your opponent. The 4-5-1 & 4-2-3-1 are both set to Control. With Control, your team will look to take control of the ball and move it around. This strategy is very good for a "passing team", which is what this entire system is looking to create. However, the 4-2-4 is set to Attacking. Due to the formation being attacking itself and the sole purpose of it is to score goals while remaining in the system, a slight change of mentality is required.

Passing Style + Tempo: This is how you pass the ball and how quickly you play your football. This system utilises a very high tempo, short passing in a way to keep possession of the ball, even from defence. The faster and more accurately your team can move the ball around, the easier it will become to keep possession and to create good attacking moves.

Attacking Play: This is how your team attacks the opposition, to state the obvious. Your defensive line will push very high up the pitch in an attempt to confine the game to the opposition's half. Your team will look to play narrower so that they aren't boxed off out wide, while your wing backs bomb down the flanks to overlap the wingers and cause havoc. Your most skilled players will look to express themselves on your attacking play to create a chance through flair or skill for either themselves or for a team mate.

Defensive Play: This is how your team defends against opposition attacks, sorry for stating the obvious again! The only real instruction in Team Instructions regarding defending is to Hassle Opponents, which just means to really let your opponents know that your defenders are ready to make big tackles on them and to make life hard for them. There are more specific instructions for the defenders themselves rather than the system. 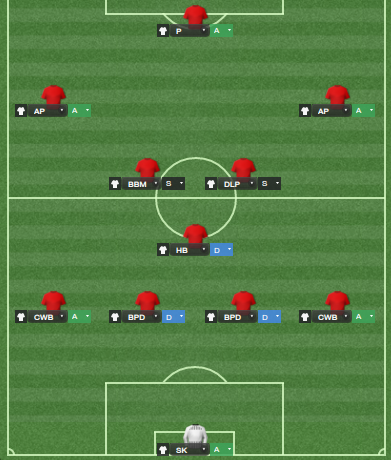 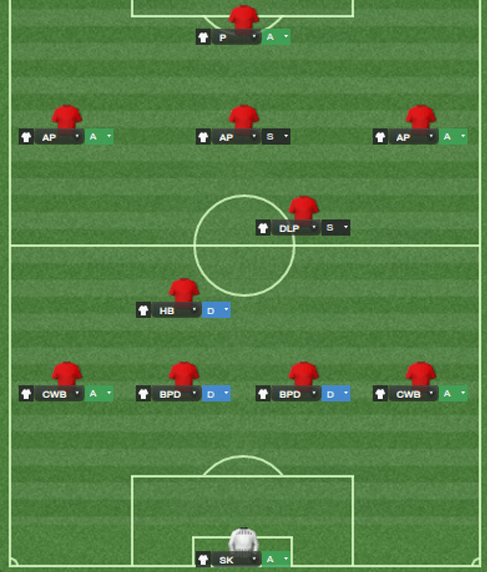 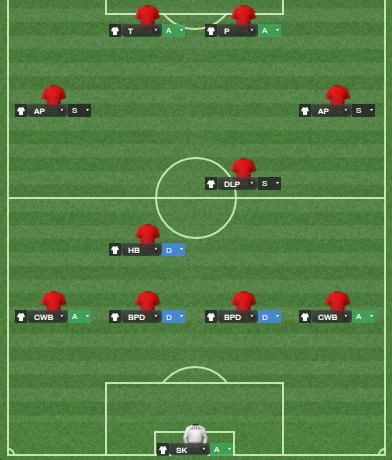 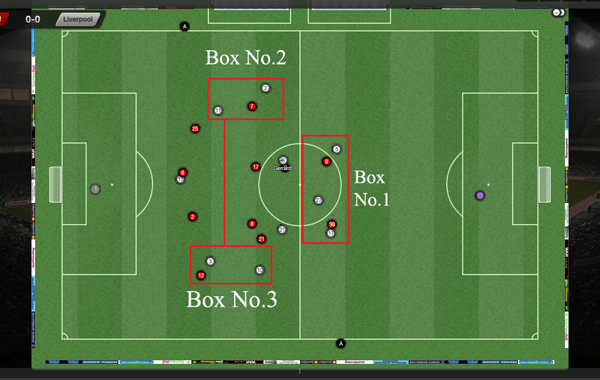 This is a typical attacking move with the 4-5-1 formation, and this is also shows a good example of how your team will look to play.

Box No.2: In this box, you can see the Complete Wing Back pushing slightly up the pitch, but deep enough that he is still a good passing option for the man on the ball. The Advanced Playmaker (right winger) is sitting narrower in order to pick up the ball in a dangerous area. As soon as he gets the ball, the Complete Wing Back will run past him on the overlap in to the pocket of space behind the left side of our opponents defence.

Boc No.3: In this box, you can see that as he does not seemingly need to be any deeper, the Complete Wing Back has pushed very high up the pitch in order to cause havoc in the opposition's half. The Advances Playmaker (left winger) has dropped slightly deeper to cover and to give more passing options, should an opportunity arise to pass to him.

These are just three points about our attack which are visible to you above. You will notice plenty more if you choose to play with this system.

If you do decide to use this system, please take note that it may take several months for your team to become fully accustomed to this tactic, even if the familiarity bar is full. If your results at the start of the season are poor, this is not the tactic's fault. It is just that your players need to have more experience in this system in competitive matches. My recommended training approach would be on Ball Control, to get your team to be as good on the ball as possible, as you will have a lot of it. For match preparation, you can work on either attacking or defending set pieces, which is the norm for any team. If you are looking to train players for this system, train them in the roles which are included, so that they become familiar with them. Just remember, if you are patient with this system or any other system, it can succeed for you.

The 'Tactic' menu, located to the top right of the right panel, allows you to save and load different tactics. To Import or Export a particular tactic, select the 'Manage Tactics' option, which will display a dialog box. 'Import' will prompt you to select a tactic (.tac file) to import into the game, whilst 'Export' will prompt you to save it to a directory. The 'Delete', 'Copy', and 'Rename' options allow you further control over your physical tactics files.

I highly recommend this system to those looking to play an attractive style of football, while still controlling the play. Be warned, it may take a while for your team to get used to this system. Also, I cannot guarantee that this tactic will be the best possible tactic for you. A tactic's success depends on the players used in this tactic. This is just a different way of playing which will hopefully bring you success.I hope that you enjoy using this system and I hope you have success with it. Any criticisms you may have are welcome, I am always looking to learn where I can improve. Thank you!

48 comments have been posted so far.