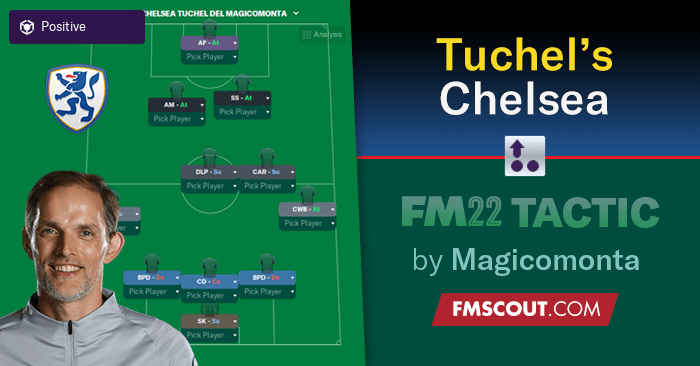 Today we talk about the revelation coach (for some) of this Champions League by bringing Chelsea Football Club to the final, it is Thomas Tuchel and this is my Tactical Emulation.

From the studies done, the Tuchel team in the row with a base 3421 that becomes a 532 in the non-possession phase and a 343/325 in the possession phase.

An extremely important constant in Tuchel's game is the role of the two attacking midfielders mount and Hakeem Zyiech, who have the task of playing three lines, in the finishing area, trying not to give reference points to the opponents and attracting the defenders to himself, creating space for the insertions of the external and Werner.

The game is very fast and direct looking for the high recovery of the ball and immediately the verticalization neither for Werner's speed or for the two outsiders.

It was very difficult to find the role and the settings in the non-possession phase to allow Mount to go down the line of the midfielders but at the same time when attacking to be in the line of the forwards.

After several tests I succeeded and therefore the 3-line midfield in the non-possessed phase is formed by Mount, central Jorginho and to his right Kanye (set as carillero because he must cover the real side and the external side of the field) while in the defensive line they are in 5. 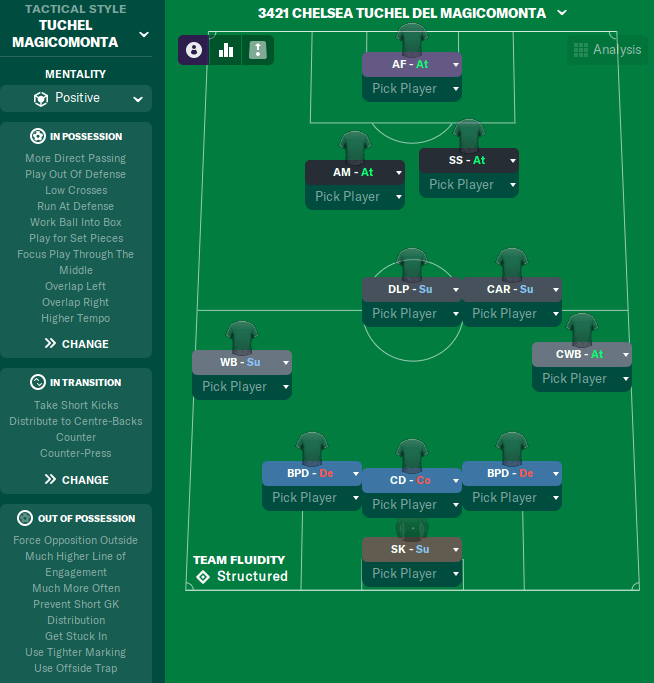 This is how I test my tactics:

These are the results of the dry season without a transfer market, without training, without tactical changes, neither in the game nor in the pre-game but only with that tactic as it goes.

4 defeats throughout the season
16 goals conceded in the premier and 22 in 55 total games with 35 clean sheets. Very good defensive phase with games against both strong and non-strong opponents with 0 shots conceded throughout the game or in any case a maximum of 1 (see images)
Timo Werner top scorer in premier with 30 goals and 40 total
Attacking midfielders Ziyech 15 goals and 19 assists mount 9 goals and 14 assists
Jorginho 13 goals and 10 assists
Full-backs Reece James 21 assists and 2 goals Ben Chilwell 5 goals and 5 assists