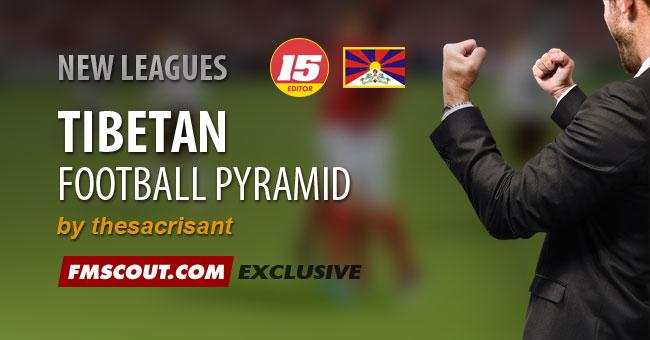 - No existing nations have been disabled.
- I took the disabled "Singh nation/region" and altered this to create the Tibet Nation.
- I did not create new clubs, I have changed the clubs from the "Chinese Amateur clubs Division" to become Tibetan clubs; so some Tibetan clubs have Chinese logos.
- For a unknown reason I cannot see the club kits, so I did not alter them. Weird problem.
- To support the national team I have changed nationality to an unknown number of Chinese and some S-Korean players; so these are now Tibetan players.
- Tibetan clubs do play the preliminary rounds to qualify for the AFC Champions League.
- The National U19/U22/U23 & first teams do play qualifying rounds to play for Continental Championships.


1st teams, reserve teams and U19 teams compete in the following competitions (each one to their own):


How to add Tibetan football pyramid to Football Manager 2015