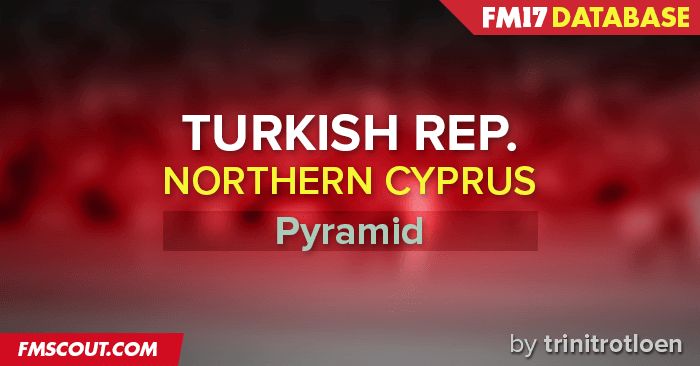 Fully Playable Version of Turkish Northern Cyprus Leagues For FM 2017 is now available.
You can check the version information and details below and also in change notes.
I hope you enjoy.

- Player positions is hard to find for TRNC teams. Max of %15 players position had been set correctly.
- Players had been removed from the teams as DB is imported from Fm 2016.

How to add Northern Cyprus leagues to Football Manager 2017

Version 1.0
- All Teams are set as Professional
- Home-Grown Status of players had been set to "Nation between 15-21" (Because of the UEFA restrictions)
- TRNC included in Euro and World Cup qualifications after 2020 due to pre-defined teams for qualifications.
- Game DB had been build upon Upper Volta
- TRNC teams can play in UEFA competitions after 1st season.
- Players' CA/PA values had been tweaked.
- "Turkish Cypriot" nationality is unavailable to select as Manager.
- All Super League teams had been modified.
- Pepsi FA CUP format had been changed due to FA Regulations.
- A Class referees had been added.
- FM 2016 DB imported to FM 2017.