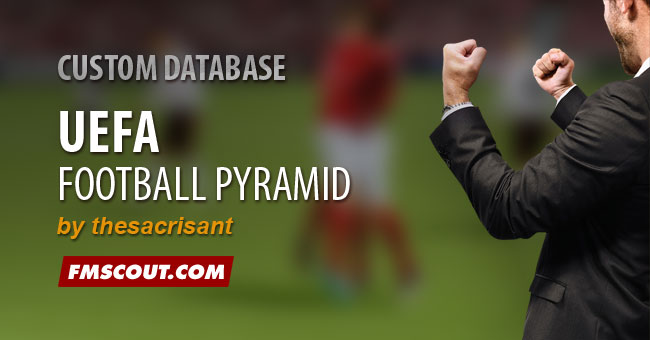 
The pyramid is closed, so no other teams can join,but if you are not satisfied, you can replace participating teams with teams you want to play these UEFA divisions.

D2 : UEFA Division 2 : A + B Promotion 4 clubs , 1 directly per group and 2 best team per group go into the playoff final
for 1 promotion ticket per group
Relegation 4 clubs directly

D4 : UEFA Division 4 : A + B + C Promotion 12 clubs , 3 directly per group and 2 best teams per group go into the playoff final
for 1 promotion ticket per group
Relegation 12 clubs directly.

D5 : UEFA Division 5 : A + B + C Promotion 12 clubs , 3 directly per group and 2 best teams per group go into the playoff final
for 1 promotion ticket per group.

-- : UEFA Super CUP : The teams that finished 1st and 2nd in the UEFA Premier League will play for the UEFA Super Cup

I am busy to remake the FIFA Club Worldchampionship.
With basic rules you add "world" as continent , but for some reason when doing this remake "world" gets removed in advanced rules.
So the UEFA Super Cup winners does not participate for the FIFA Club worldchampionship
I will update this version.
I also made some simple logos that are available in the rar file.

Extract the downloaded file with unrar of 7-Zip for Windows or The Unarchiver for Mac here.

Start a new career game by choosing this FMF file.

Download the .zip archive and use a tool such as 7-zip for Windows or The Unarchiver for MacOSX to extract its contents.

Move the extracted contents to your graphics folder:
\Documents\Sports Interactive\Football Manager 2015\graphics\logos\
Create folders "graphics" and "logos" if they don't exist already.
If you're installing an updated version, simply overwrite everything.