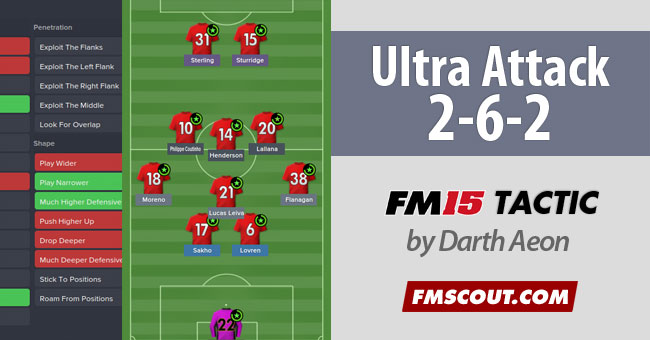 After trying lots of tactics and getting results varying from winning UCL to being sacked I have decided that I am unhappy with my coaching work.
So I took a pen and a piece of paper and wrote down my thoughts about what I want to achieve , as it follows:
1. Play offensive football
2. Create numerous goal scoring chances (score more than 2 goals per match)
3. Decent defense, able to allow few goals.
4. Good cover all over the pitch
5. Close down opponents as soon as they get the ball.

Therefore I started reading articles published about game strategies and after several days spent watching games I finally got to the results I wanted.

Now let me give you some information about this tactic.


Mentality establishes the team’s basic style of play in terms of how players will attempt to use and win back the ball.


The team shape setting establishes the basic outline of the team’s system in the build-up phase. It can be thought of as a way of structuring player responsibilities when they are transitioning from defence to attack. Essentially, it tells some players to be slightly more or less aggressive in their play relative to their position, and in terms of the tactical principles, this translates to the players individually focusing more on offering either depth or support in build-up play. A very fluid system places a heavy emphasis on providing close support to the midfield in a loosely organised approach that encourages players to play their natural game. The team as a whole is expected to remain more compact as a unit with a view towards encouraging complex movement and passing patterns in which all players are expected to be involved in constructing attacks and setting up chances for one another. Individually, all players are encouraged to play with panache and creativity when they receive the ball. 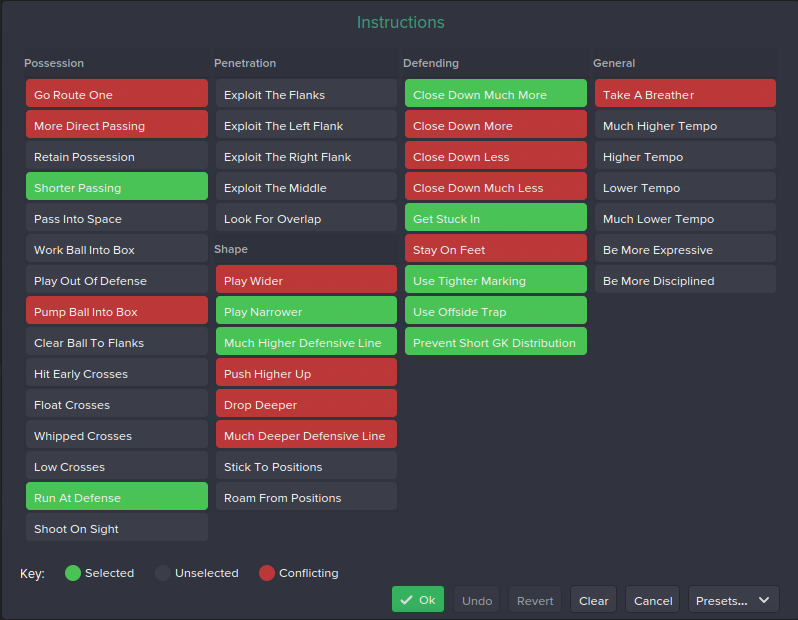 Shorter passing reduces the passing range of all players one setting toward the simple/much shorter end of the spectrum. Width and tempo are reduced one setting toward the more defensive end of the spectrum. This will encourage players to look for close support more often which, assuming that support is available, can help the team hold onto possession. The lower tempo is relied upon primarily to allow supporting players to move and make themselves available for a pass.
Run At Defence encourages penetration by instructing all strikers, attacking midfielders and wide forwards to dribble more. This can be useful when facing defenders who are either reluctant to put in a challenge or prone to conceding fouls in dangerous areas.
Play Narrower encourages players to stay more compact in attack. This will enable the team to consolidate more quickly upon losing possession.
Much Higher Defensive Line encourages the team to compress space much more and pressure opposition players more aggressively.
Close Down Much More encourages players to apply pressure much more quickly. It increases the closing down instruction of all players. This effectively pushes the team’s line of confrontation higher up the pitch, though without an accompanying increase in the defensive line, it may create the risk of space opening up between the midfield and defensive lines.
Get Stuck In encourages players to tackle more aggressively. This will increase the risk of both a foul and a loose ball following a challenge, but it can result in good tacklers applying pressure more effectively against technically poor or timid attackers.
Use Tighter Marking encourages covering defenders to stay closer to supporting attackers who enter their area. Assuming the defender can keep up with the attacker’s movement, this will allow him to better discourage a pass to the man they’re marking, but this can also potentially open space for a deep pass through the defence. It can also open up space in which mobile second attackers can receive the ball if they lose their marke.
Prevent Short GK Distribution encourages strikers and wide forwards to markopposition defenders and apply aggressive pressure inside the attacking third.

Here are some screenshots to prove the efficiency of this tactic
http://s4.postimg.org/ma12e2hb1/Schedule_Senior_Matches.png