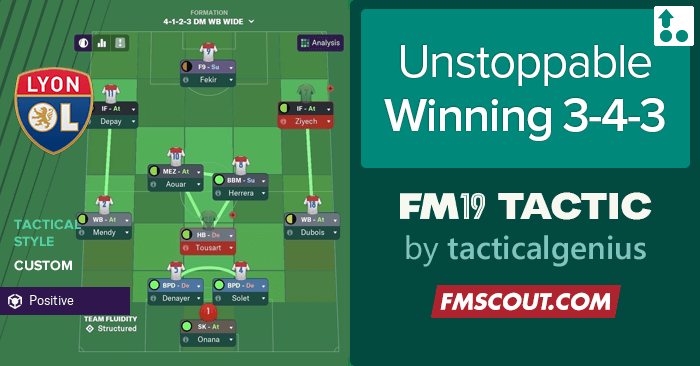 Hi guys and welcome to my first tactic that I would like to share on this website. I have created a truly amazing tactic, which both gets fantastic winning results while also playing fluid, progressive football that is visually pleasing. I tested this tactic with OL for 3 seasons, winning the Champions League in all three seasons and winning the French league title in the final two. This tactic is influenced by two managers in particular: Eric ten Hag and Maurizio Sarri, who both seek to dominate possession while playing beautiful, attacking football. Enjoy! Mentality:
Always go into games with a positive mentality, which encourages the team to be fearless, regardless of the opposition.

In possession:
As stated earlier, this tactic is influenced by Sarri and ten Hag, who both look to move the ball vertically and dominate possession. So, I employ much shorter passing combined with a much higher tempo, causing the team to move the ball quickly but elegantly, often leading to many beautiful tiki-taka-esque goals. Playing out of the back is extremely necessary in order to keep possession of the ball, so I recommend setting some weeks of training to possession. I set the width to the widest possible so the players can stretch the field open and create holes between the oppositions defensive line.
Positionally, the center backs spread wide in order to open up passing options, but there is a big hole between them. To counter this, I set the defensive midfielder to a half-back (a very underrated role) which causes the DM to drop into the defensive line while in possession, creating another passing option which helps with the build up. The wing backs push up and hug the touchline in line with the midfielders, creating a bank of 4 with the 2 center midfielders. They also overlap over the inside forwards, causing havoc on the wings. The mezzela offers creativity from deep and gets forward to serve as another attacking option. The inside forwards tuck inside narrower in line with the false 9, creating the final line of 3.

In transition:
Always look to counter attack and counter press and have the keeper distribute the ball to the center backs quickly.

Out of possession:
When not in possession, I look to get the ball as quickly as possible to further dominate possession. Play with a higher defensive line and a higher line of engagement to condense the opposition and close the space between your players and the opposition. Playing an offsides trap often pairs well with the higher defensive line.
The half back, when out of possession, returns to a more traditional DM position, screening the backline while supporting the 2 center midfielders in front of him. The wing backs join the line with the centerbacks, thus creating a 4-3-3 shape in defense.