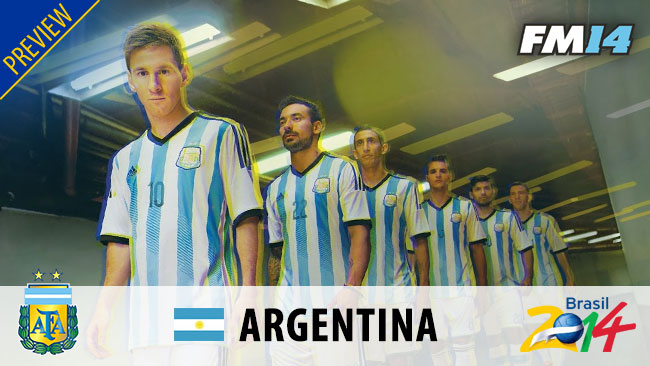 Argentina, historically are one of the most talented nations to ever grace the game. Currently ranked 5th in the world by FIFA, players like Diego Maradona, Daniel Passarella and managers such as Cesar Luis Menotti are just a glimpse of what this famed nation has served to the world of football, and there is even more coming!

In Group F, Argentina have been handed an easier draw than other nations and should qualify fairly easily. Iran, Nigeria and Bosnia & Herzegovina will all face up to the South American giants in the group stages, and all will probably go into their fixtures against Alejandro Sabella's side as underdogs.

Argentina can be classed as one of the most successful nations to ever compete in the World Cup. They've won two titles and appeared 15 times at the tournament, a pretty decent record. Despite the powers of Spain, Germany and Brazil, expectations will still be high on Argentina to deliver a performance of the highest quality.

The obvious attraction and star man of this Argentina squad is Barcelona marquee Lionel Messi. The multiple Ballon D'Or winner has always been criticised for his perceived poor performances for his country. But Messi, capped 85 times by his nation, has a point to prove, and he will be out to defy his critics and fire Argentina to glory.

Another star of Argentina's formidable attacking force is Manchester City frontman Sergio Agüero. The ex-Independiente and Atlético Madrid striker is one of the world's most talented goalscorers and ever since his move to England he has only continued to grow into a world class player. If he fires on all cylinders, it gives Argentina another outlet.

Completing this unbelievable attacking trio is Napoli poacher Gonzalo Higuain. Since his summer move from Spanish giants Real Madrid to Napoli in search of first team football, Higuain has turned into a goal machine. If he is to continue this rapid rise in form we could well see another star emerge at the World Cup.

He may not be an unknown name, in fact, he is completely the opposite, but Ezequiel Garay has gained lots of plaudits for his outstanding season at Portuguese giants SL Benfica. The centre back has been linked with Premier League heavyweights Manchester United and is one of the most up and coming players of his position at this moment.

Argentina manager Alejandro Sabella has been gifted with one of the most talented forward lines out of any squad in the World Cup and he'll have more firepower than any other nation at the World Cup. As well as this, Sabella has addressed the problems in defence and has built not only a side that can score, but can defend as well.

Argentina is a treasure chest when it comes to footballing talent. New eras of youngsters arise from the youth systems at notable clubs such as River Plate, Boca Juniors and Racing every season and it won't be long before the next generation of Argentine footballers are churned out.

Legends of the past include Diego Maradona, sometimes referred to as the greatest of all time, Gabriel Bastituta, their record goalscorer and other highly recognised players such as Daniel Passarella, Ossie Ardiles and Ricardo Bochini.

Firstly, the media verdict. Argentina have flown under the radar recently regarding predictions, but the general feeling is they have the potential to make at the bare minimum the quarter finals, more likely the semis.

My own prediction is, like the pundits out there, the semi finals. They have the firepower, the solid defence and they have more than enough backup for a Plan B. They should take their group easily, and also get around the second round fairly comfortably. If they get a little stroke of luck, they could well possibly make it to the final.