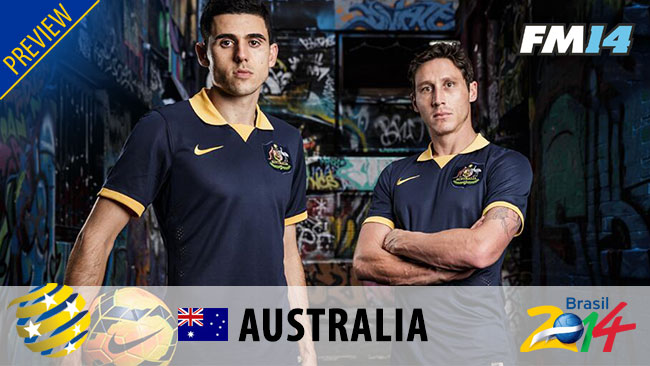 Australia is a country dominated by other codes of football. Australian rules, rugby union and rugby league dominate the news regardless of whether the football is on or not. After some huge interest in their qualification in 2006, the public has seemingly left the bandwagon and Australia will go to Brazil with little public support. Then again, the odds aren't exactly in their favour.

Australia have been drawn into Group B , the proverbial 'Group of Death', alongside Spain, Holland and Chile. The former two were the teams that played off in the final last time around, and Chile is full of capable stars. Australia will have to deal with some of football's biggest names, including Andres Iniesta, Arturo Vidal and Robin van Persie. It will be a daunting task for the regenerating Australians, and it will be unlikely they come out unscathed.

In 1974, Australia became the first team to qualify for the World Cup from Oceania, although they failed to score a goal and picked up a solitary point against Chile. 32 years later, Australia finally returned and made it to the round of 16, getting knocked out by eventual winners Italy. 2010 was not a cup to remember as they failed to advance out of the group stages. Australia are a very inexperienced World Cup nation, with just 3 appearances and just 1 with any success.

Australia have a very rounded squad, and lack the firepower of most World Cup teams. However, there are some diamonds in the rough. Australia's gem is Tim Cahill , a legend of the side and arguably the greatest Socceroo of all time. Cahill can play through the middle of the park and in an attacking midfield role but he will probably be used up front due to lack of experience. He has amazing heading skills and will cause headaches for the opposition.

Taking over his mantle in central midfield is Crystal Palace captain Mile Jedinak . Jedinak has had a good season in the Premier League and will come to Brazil one of Australia's more elite players. He is a great tackler and is a great all round defensive midfielder or central midfielder.

In defense, the usual suspects of Luke Wilkshire and Lucas Neill have been surprisingly omitted so Australia's defense is very inexperienced. Australia have barely any quality players, so they will have to play out of their skins to stop goals.

With the recent retirement of Mark Schwarzer, Club Brugge keeper Matthew Ryan is now Australia's No.1. He has had an amazing year in Belgium and will come to the Cup in scintillating form. He has good reflexes and will be heavily relied on by his teammates for clean sheets.


Australia have been regenerating their squad recently, slowly removing the older stock and inserting young prospects. Some of these are already playing good football in Europe and could be livewires at the cup.

One such player is Ben Halloran, a right winger for 2.Bundesliga club Dusseldorf. Halloran will replace Robbie Kruse on the right. He is a developing player, but could make an impact.

In attack, Tim Cahill could well not be needed as A-League Golden Boot Adam Taggart is on the plane to Brazil. Taggart is a prodigious talent who had a breakout season, and if form is anything to go by, he should be kicking a few goals in June.

At the helm of the Socceroos is Ange Postecoglou, arguably the greatest A-League manager ever. He led Brisbane Roar to 2 consecutive championships, and won a premiership. He has been labelled Australia's messiah, and is a welcome change from the ageing Europeans we have seen in charge recently. Postecoglou is not as good as some of the European managers, but is a fairly good manager and should do Australia well.

The injury bug has hit Australia hard, with their best player Robbie Kruse on the sidelines with a serious knee injury. He has been in lethal form for Bayer Leverkusen and will be missed dearly by the already outclassed Aussies. Young Celtic playmaker Tom Rogic was cut from the 30 man squad due to fitness issues, whilst a similar fate has befallen striker Josh Kennedy, who kicked the goal that sent Australia to Brazil.

Australia has been labelled by the media as the worst team at the Cup, and general consensus agrees. Australia is the middle of a rebuilding process, with old stars on the way out and newcomers in. The World Cup has come at the wrong time for the Socceroos and this new look squad will have no match for the might of Spain, Holland and Chile.

In my opinion, this could be a dark month for Australians, and we will probably see Matthew Ryan picking the ball out of the net far too often. Australia simply do not have the class and skill to do well at such a competitive competition.