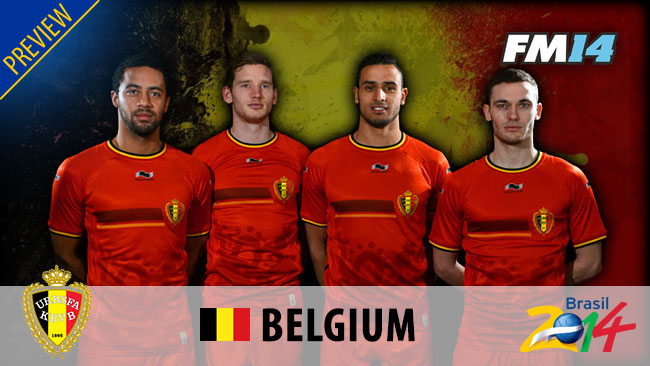 Belgium, The nation with strong individual's. However, as team they are not the best. Belgium never won the World Cup before. This year with Marc Wilmots, Belgium fans can hope for a good result.

Belgium were put in Group H, The easiest group of all. They have to challenge Algeria, Russia and South Korea, None of the teams won the World Cup before, But they have some dangerous players. Korea has Ki Sung-yueng, Son Heung-min and Park Chu-young. Russia has Igor Akinfejev, Aleksandr Kerzjakov, Sergej Ignasjevitsj And Algeria has Sofiane Feghouli, El Arbi Hillel Soudani, Madjid Bougherra. It won't be easy to win but with the squad Belgium have is it possible.

The history Belgium have in the World Cup is very small.With their only result being fourth in 1986, however they Won the Olympics in 1920.

Belgium, like all teams have those 'stand-out' players.Argentina have Messi, Brazil have Neymar. Belgium have none other than Eden Hazard, who doesn't have experience but that doesn't matter Hazard is a young and talented player. He can determine a match on the age of 22, He's a key player for Chelsea and Belgium.

Belgium also have an experienced defender, Vincent Kompany, who's the captain of a amazing club and a amazing nation. He will add experience and knowledge in the defence and could play a huge part in stopping various threats. He will most likely be the first name on the team sheet as his leadership skills as captain can motivate his team-mates in the most important games.

And finally Belgium's man between the sticks, Thibaut Courtois, he will be a huge factor to how Belgium do in the World Cup. he has a very good spell for Atletico Madrid. Courtois helped Atletico Madrid winning the Liga BBVA and reaching the Champions League final.

Now every World Cup there are surprises, especially when it comes to younger players being called up, and for Belgium there is no exception. Wilmots has decided to call up a younger player who have had a very good season. Adnan Januzai, a player who really impressed for Man United this season. He became first team quality. Wilmots called him up and hopefully he'll play enough minutes to show just how good he can be.

Wilmots surprised us all when he called Origi up. The young striker will be a decent back-up in the attacking area.

Belgium are led by a experienced manager, called Marc Wilmots, who didn't get many spells at clubs But he learned a lot when he was assistant manager from Belgium. Wilmots played for Belgium at the world cup in 2002. Wilmots knows his stuff and learned enough to lead Belgium to the World Cup Final.

Like all nations, Belgium have been struck by the World Cup curse and have some players missing. The most notable absentees being Christian Benteke and Koen Casteels Benteke was Belgium's first choice striker. Him being injured is a little problem for Belgium. Casteels was only 3th choice goalkeeper, his injury isn't a big problem.

The media have predicted that Belgium should progress out of their group and possibly get into the quarter finals. The media puts high expectations on Belgium and it's up to the whole team to make sure they don't disappoint their fans. 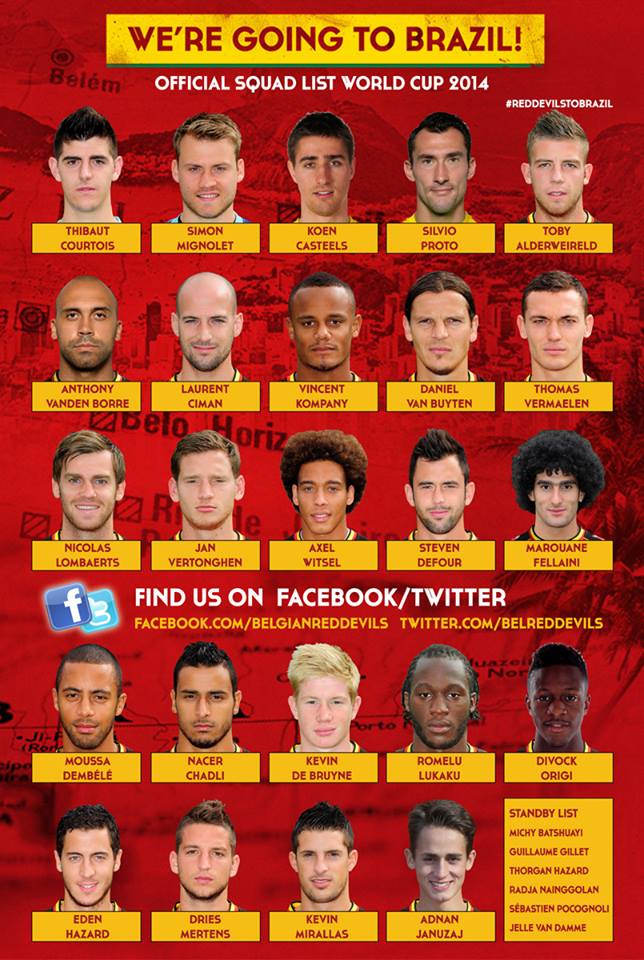 *Injury (Silvio Proto OUT Bossut IN)