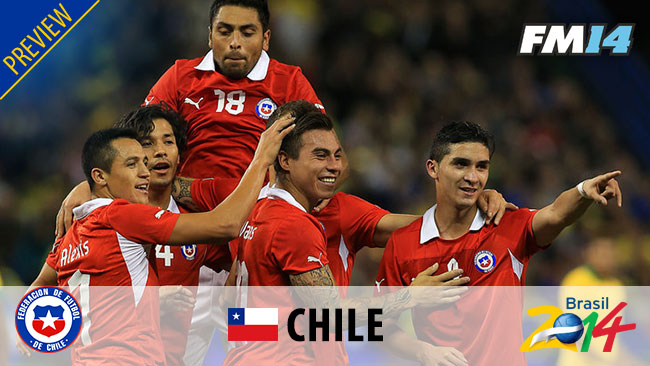 Chile are one of the most underrated nations leading into this year's FIFA World Cup. A team for the neutrals, Chile have gained plaudits for their fast paced attacking football and could potentially cause an upset come the group stages.

The footballing gods have not been kind to Chile - placing them in Group B, alongside the two finalists Spain and Holland as well as Australia. While it looks incredibly tough on paper, Chile could spring a surprise and maybe sneak into the next round.

Chile have never won the World Cup before and have never really tasted success in many competition. Their trophy cabinet is pretty bare.

While Chile have a well rounded squad, their star is undoubtedly midfielder Arturo Vidal. Vidal's versatility cannot be underestimated and if the 27-year old can replicate his stellar form at club level on to the international stage then Chile will have a much greater chance.

Another key player in Chile's ranks, Barcelona forward/winger Alexis Sanchez will want to show the world what he's truly capable of after having his playing time somewhat decreased due to competition at his club. Sanchez's pace, dribbling and finishing are all top class and Chile are counting on the 25-year old to deliver.

Somewhat of a veteran, the 30-year old goalkeeper Claudio Bravo will play a pivotal role between the sticks and look to nullify some quality opposition, including the likes of Manchester United forward Robin van Persie. If Bravo is up to standard, the Chilean defence won't have to sweat.

Napoli youngster Eduardo Vargas will look to impress on the big stage at the World Cup. The striker, who can also play on the wings, is a natural finisher with great acceleration and pace. Vargas will want to show his nation he has what it takes to merit a place on the squad.

Jorge Sampaoli is labelled as a Bielsa "disciple" because of his love for quick, flowing attacking football. His team plays energetic football and they can out run opponents on most days. The Argentine had great success at club level with Universidad de Chile, but now he'll want to go one better with Chile.

Chile are a top quality side and that was demonstrated in their friendly victory over England. Their defence could be an issue but their midfield and attack is quite formidable. They haven't been handed a kind draw at all, but are largely underrated considering they've been in the top 15 of FIFA rankings for two years now. If they can beat Holland and Australia, they might just get through, but it's hard to call.