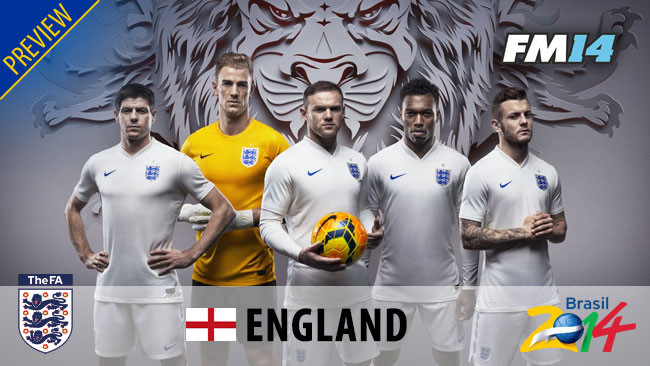 England, the host of possibly the biggest league in the world, The Barclays Premier League. However, when it comes to the World Cup, lets say they haven't been as successful as they should have been, and under the leadership of Roy Hodgson, England fans believe maybe this is the year.

England were put in Group D, and have to face the challenge of Italy, Uruguay and Costa Rica, two of which have won the World Cup before and have some very dangerous players that England will need to stop, most notably Luis Suarez and Mario Balotelli. They will need to pick the best squad possible to neutralise the threat of these teams, but under Hodgson's guidance, it's very much possible.

England aren't blessed with the best of histories in the World Cup, with their only success being in 1966 after beating West Germany 4-2 after extra-time, however they could not keep up this tradition and have failed many of times to get back the World Cup Trophy, with the result of many manager sackings and disappointing group stages.

England, like all teams have those 'stand-out' players, Argentina have Messi, Brazil have Neymar, but who do England have? None other than Wayne Rooney, who doesn't have the best World Cup record but his work-rate is second to none, he will commit himself both going forward and dropping back to defend. He will be a key figure in England's hunt for their first World Cup final victory since 1966.

England are also blessed with a very solid and experienced midfielder, Steven Gerrard, who has had an amazing career both at club and internation level. He will add experience and knowledge in the heart of midfield and could play a huge part in stopping various threats, especially from his Liverpool team-mate Luis Suarez. He will most likely be the first name on the team sheet as his leadership skills as captain can motivate his team-mates in the most important games.

In the defence, Gary Cahill could also be a huge factor in England's quest for World Cup victory after he endured a very good season for Chelsea and he is heading to Brazil in excellent form. His ability in the air and his knowledge of the game will be a key asset to England's back four. He also has very good pace due to his height meaning he can catch the fastest of opponents before they can attack England's goal.

And finally England's man between the sticks, Joe Hart, may be a huge factor to how England do in the World Cup. Althought he has a poor spell for Manchester City, the shot-stopper picked himself up before the end of the season and aided Manchester City to winning the Premier League Title. His ability in goal will give his team-mates trust and confidence and if it comes down to a penalty shoot-out, you can bet that Joe Hart will do his best to save every penalty.

Now every World Cup there are surprises, especially when it comes to younger players being called up, and for England there is no exception. Hodgson has decided to call up some younger players who have had a very good season. We'll start with Ross Barkley, a player who has really impressed for Everton this season ans has attracted huge interest from some of Europe's biggest clubs. Hodgson has called him up and hopefully he'll play enough minutes to show just how good he can be.

Hodgson also surprised us all and left out the experienced Ashley Cole for one of Southampton's rising stars, Luke Shaw. The young full-back has really stepped up his game this season just gone and will offer a lot going forward and will be a very good back-up for Leighton Baines. Shaw will hopefully be given a chance but he will have to settle with being a back-up to Leighton Baines, who is a more established left-back. Shaw will be given a chance if not at this World Cup, the next one for sure.

England are led by a very experienced manager, that being Roy Hodgson, who has had many spells at some big clubs in England and has managed Switzerland, who he managed to take to the round of 16 in the 1994 World Cup. This was a huge achievement as Switzerland hadn't qualified since the 1966 World Cup. Hodgson knows his stuff and has the experience needed to lead England to the World Cup Final. He has selected a very well balanced team and has prepared the players well, he is just hoping that they can all perform to their very best when they head off to Brazil.

Unavailable due to Injury

But like all teams, England have been struck by the World Cup curse and have some players missing which would possibly dent their hopes for a good finish. The most notable absentees being Tottenham's Kyle Walker and Southampton's Jay Rodriguez, who hit the best form of his career before gaining a very bad injury, excluding him from selection. Many players who were injured have recovered in time for selection, with the most recent one being Phil Jones, who is back to full training after damaging his shoulder against Hull City.

The media have predicted that England should progress out of their group and possibly get into the quarter finals. The media always put high expectation on England and it's up to the whole team to make sure they meet these expectations or yet again there will be a huge uproar from the media which could cost Roy Hodgson his job, depending on where England finish.

In conclusion, my opinion is that England can progress out of their group and make it to the quarter finals. I do not expect us to win the competition due to the high quality teams but if Hodgson gets his tactics and team spot on, we could be in for a memorable World Cup. 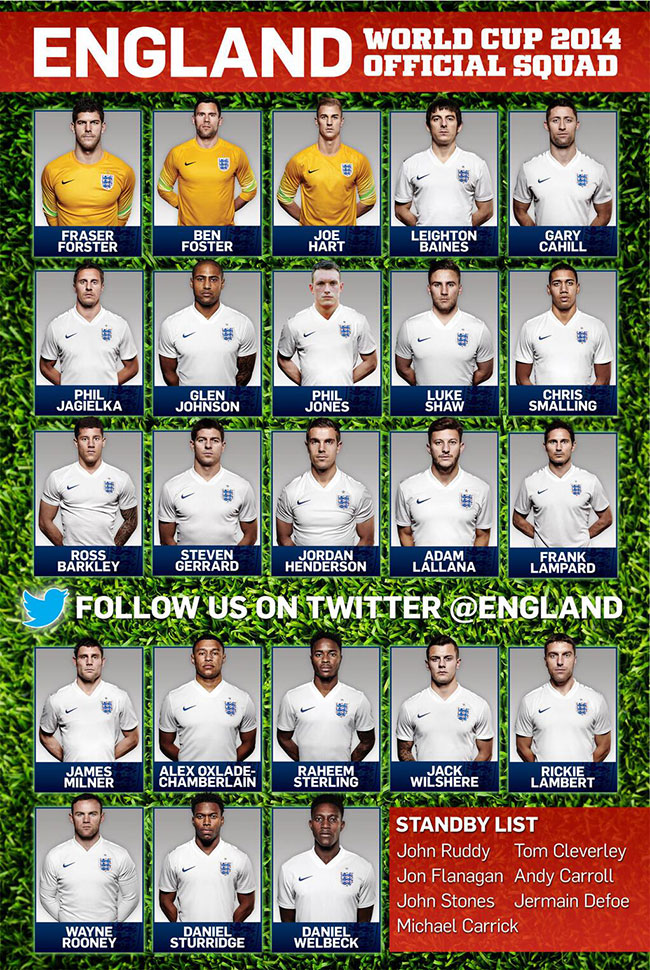 What is your expectation from England for the 2014 World Cup?